His and Hers Houses 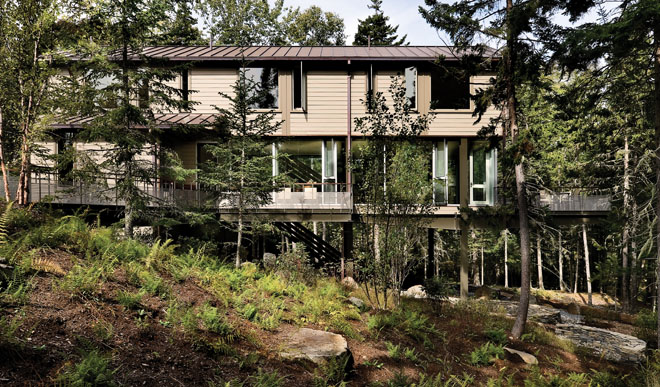 The home’s long narrow design is due, in part, to the owners’ desire for maximum exposure to the woods. 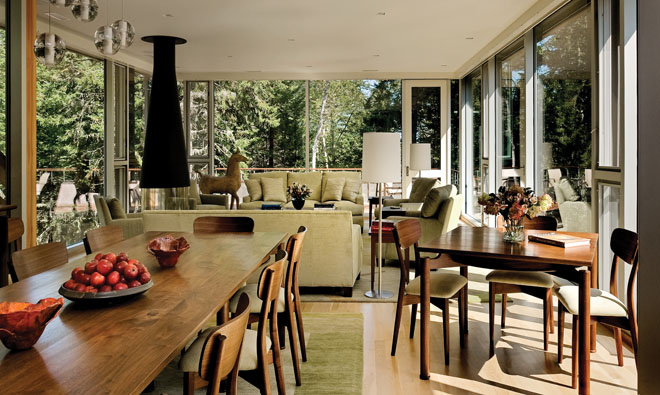 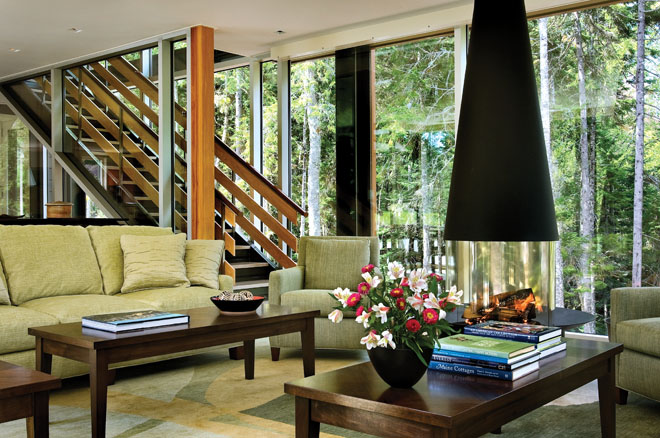 A view of the living room shows a suspended fireplace designed by British architect Norman Foster. The glass below the floating cone opens and closes. To the left, behind a glass wall, is an impressive steel staircase with cypress detailing and oak treads. 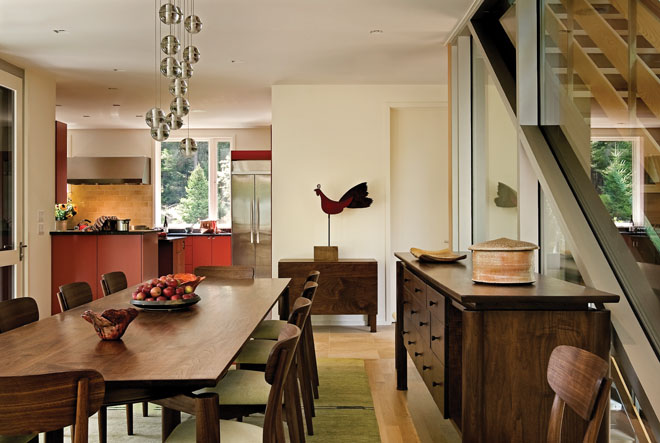 Jamie Johnston Furniture in Portland designed and made the long walnut dining table. The matching chairs were made by Aaron Fedarko of Camden and upholstered by John Gagnon of Lyman. The crystal globes above the dining room table were purposely hung at different levels. In the background, there is a traditional New England woodcarving of a bird. 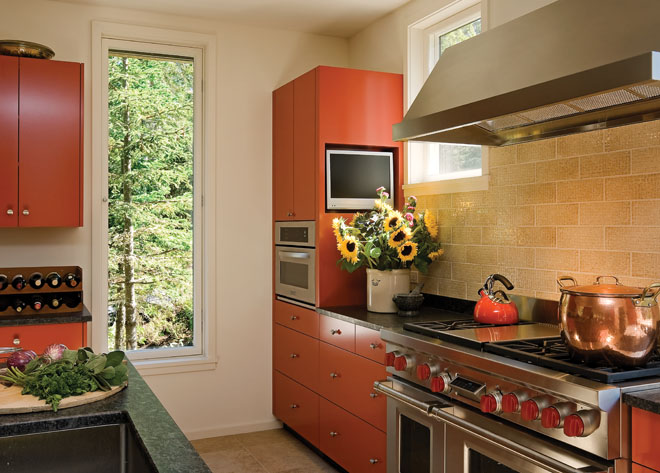 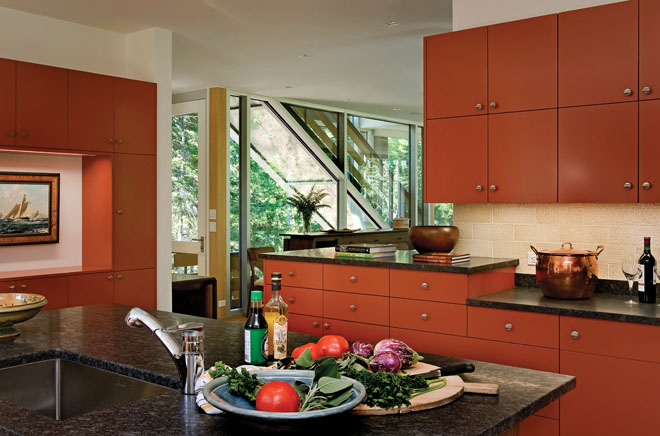 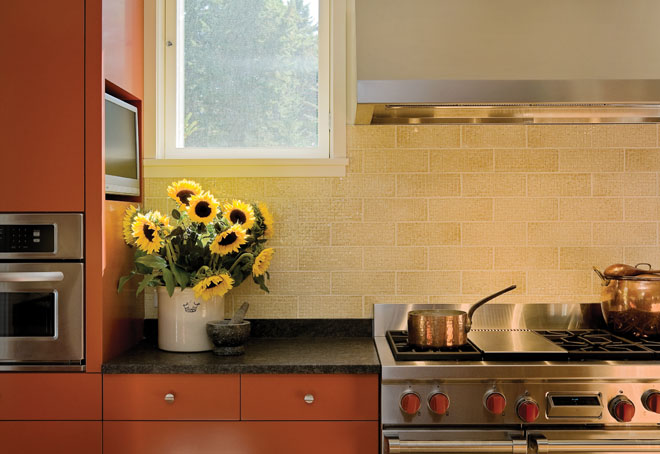 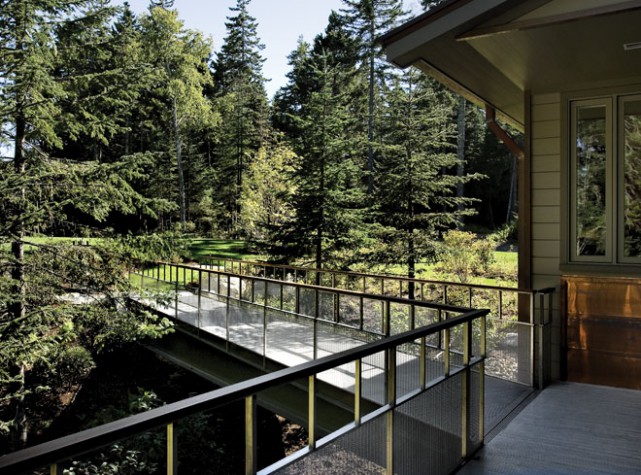 A stainless-steel cantilevered bridge with cypress handrails, as seen from the front deck. 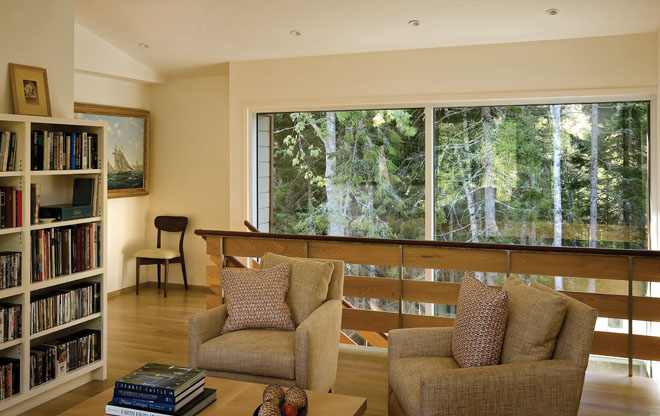 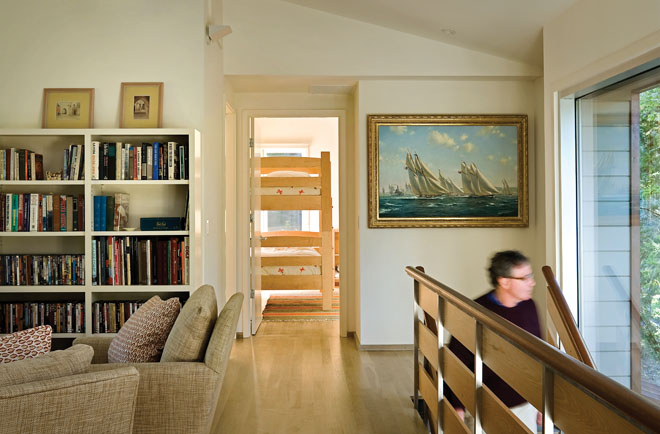 A media room at the top of the stairs separates two bedroom suites. The painting of the ocean off Cape Elizabeth is by the home’s architect, Sam Van Dam. 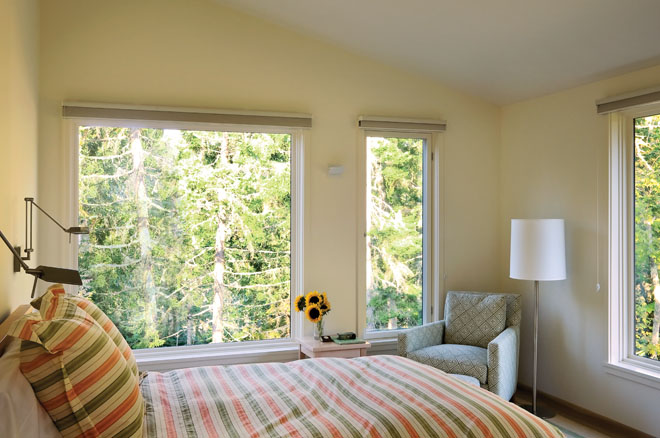 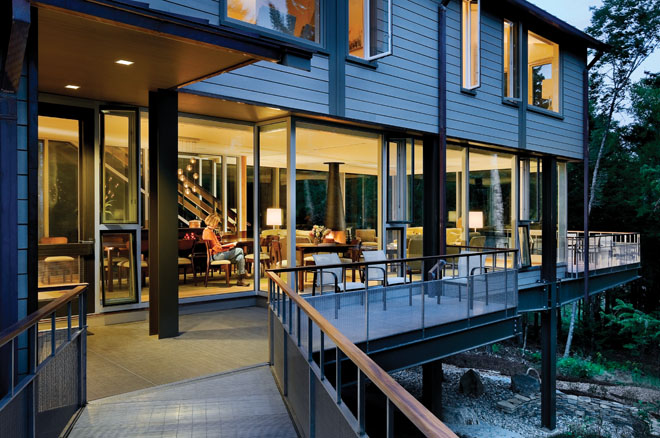 A cantilevered bridge leads to a house of steel and glass that is also cantilevered over a sloping hill. The front porch wraps around a glass-enclosed dining room and living room. 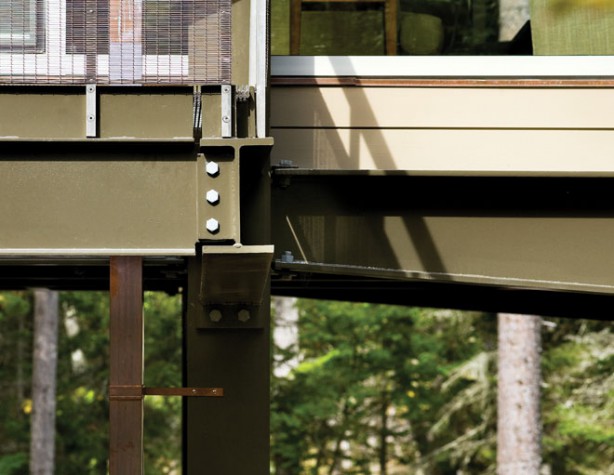 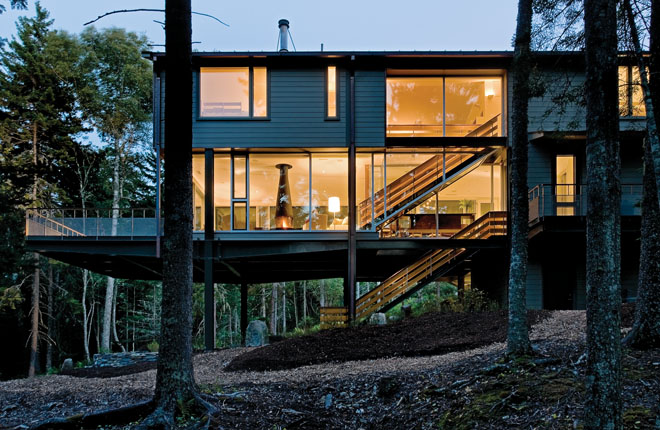 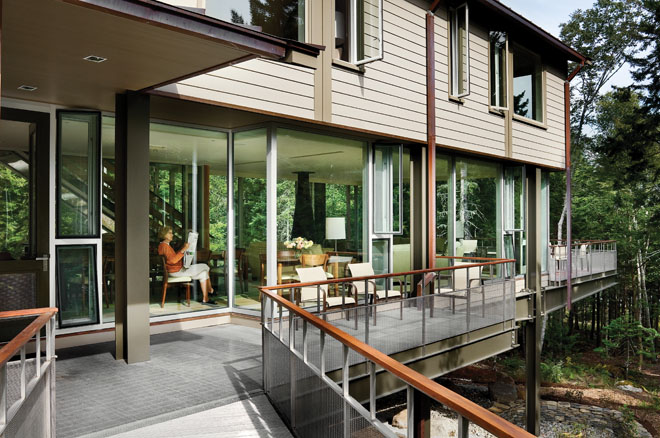 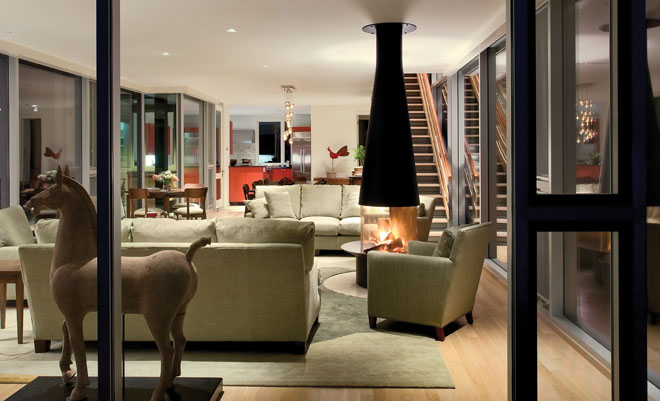 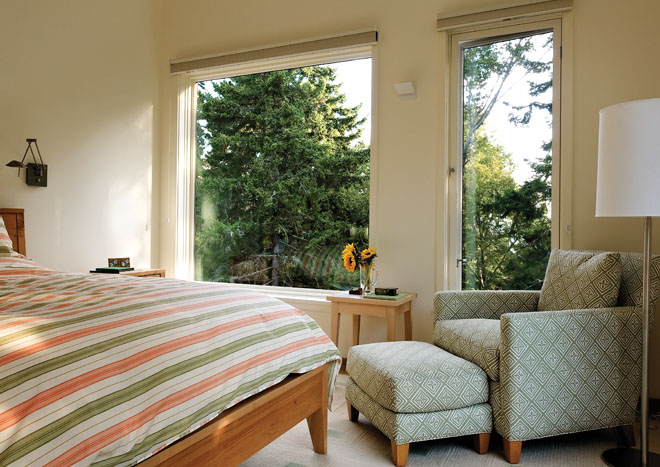 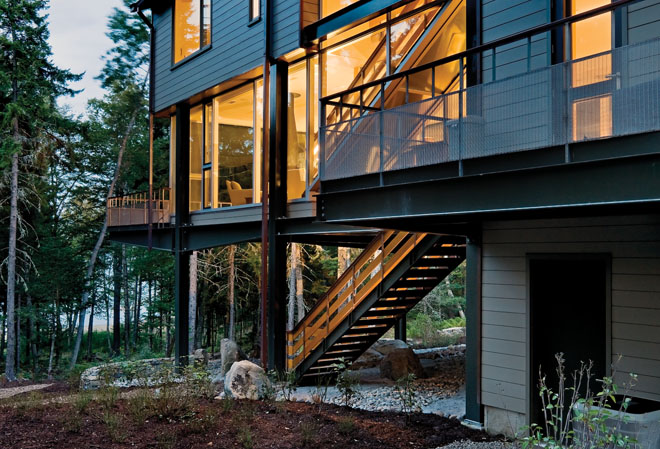 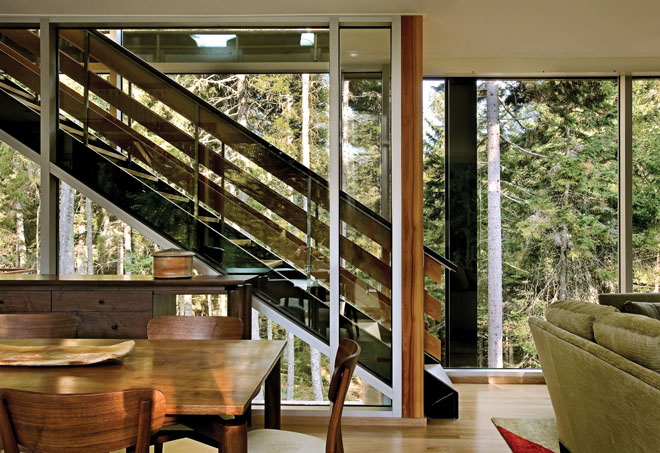 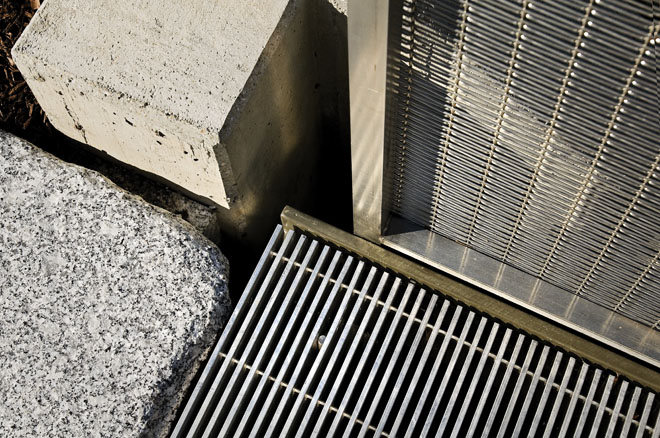 A detail of a granite step that borders the stainless-steel deck.

In 2007, architect Sam Van Dam visited the Francis Loeb Library at the Harvard Graduate School of Design. He had some new clients—a Boston couple who intended to build on an island in Penobscot Bay—and Van Dam wanted to use the library’s collection to discern their tastes. He found a quiet corner, had the couple sit down, and he started bringing over books with images that he found “provocative.” He was not trying to educate; his clients already knew plenty. They had traveled the world, often on their sailboat, and they had “a good visual library,” as Van Dam puts it. But that didn’t mean Van Dam knew what sort of house they wanted. Later, over lunch, the three had a wandering discussion about what they had seen. Van Dam found the conversation revealing—such conversations always are, he says—especially because the husband and wife didn’t have the same tastes. Van Dam wasn’t surprised. In his experience, couples frequently have different likes and dislikes. But in the case of the Boston couple he would have an unusual opportunity.

Not that he knew this at first.

Initially, Van Dam and his firm Van Dam Architecture and Design, which has offices in Portland and Thetford, Vermont, designed not one but two structures for the couple: a main house and a barn with guest quarters. Van Dam was particularly proud of the main house. “It is one of the best homes I’ve ever done,” he says. Others have been similarly impressed. Tom Daley, the caretaker for the house, says it’s his favorite house on the island. In 2008, the Maine Chapter of the American Institute of Architects cited the project for design excellence. The couple was no less enthusiastic, but Van Dam admits that, in a certain sense, the residence was “her house.” It was built to suit the wife’s design sensibilities, and her desire for a house with a Douglas-fir interior and a cedar exterior and with Japanese and Scandinavian influences.

“When you meet a client,” Van Dam says, “you do a dance. Sometimes you do one dance; sometimes you continue to dance.” Van Dam and the Boston couple continued to dance. In 2007, the couple decided to build another house on the property. This house would be “his house.” Or, rather, it would be “his” in terms of the design. In addition to being an active sailor, the husband had been a commander in the navy. He liked what he had seen while in Australia and New Zealand. He has a fondness for steel and for structures that are “stripped down and directly purposeful in a mechanical way,” according to Van Dam. There had been features the husband favors—including cantilevered structures—that simply couldn’t be incorporated into the first house.

This new house, however, was going to have steel. It was going to be cantilevered over a sloping piece of land that leads to a small cove. It was going to have a cantilevered bridge and cantilevered decks. Still, the house wouldn’t be the husband’s house in one important respect: he wasn’t going to live in it. The house was being built for the couple’s children and grandchildren. Van Dam nicknamed the project the “Two Family,” because the second floor would have two bedroom suites separated by a media room. As for the couple, they nicknamed it the “Cook House,” because they wanted it to be where the family would gather for meals when they weren’t dining on the beach.

“When an architect gets together a brief from the owners and looks at the site, he begins to form the ‘parti,’ or the basic organizing principle of the design,” Van Dam says. “In this case, the first thing that hit me was that a big part of this program was getting everyone in the family around a long table for dinner. The second thing was that the homeowners wanted equal exposure to the woods on all sides.”

The couple had one other important requirement for their children’s new home: they didn’t want the process of building it to disrupt their lives. Builder Jay Fischer of Cold Mountain Builders in Belfast notes that the couple’s initial house was “a handcrafted house on a raw piece of coastal land.” As a result, “It took quite a little while, perhaps longer than they expected, because of the detailing,” Fischer says.

The solution: a prefab.

Van Dam designed a house that could be largely built off- site and then assembled in a short period of time with the help of a crane. Once manufactured, everything came over by boat, including the steel frame, walls, floors, stainless-steel deck panels, precut commercial window system, copper-seam roofs, and millwork. The walls were made of SIP—structural insulated panels that consist of siding, plywood, rigid insulation, and even an interior finish—that were precut to size so they could be fitted into place on-site. Deciding to go with a prefab would save time in any case, but it was especially useful given the location of this particular house. As Van Dam points out, “When you are on an island and you find you have the wrong kind of nails, you are in trouble.”

Now that it is done, the Cook House is dramatic and unpredictable in every respect. One arrives at the house via a cantilevered bridge made of stainless-steel grating, stainless-steel mesh panels, and cypress handrails. An entry porch wraps around one side of the house, and the exterior is green clapboard and glass. The home almost reads as an oversized glass cabinet with the most distinctive curios, such as the staircases (made of steel, cypress, and mahogany) and the fireplace—a suspended black cone floating over a black base that was designed by the British architect Norman Foster (of the famous Gherkin, as any Londoner can tell you). “We wanted it to be beautiful,” the husband says of the fireplace. “Because the room is glass, there is no art on the walls, so the art is in the carpets and the fireplace.” The carpets were designed by Tim Van Campen of Thomaston and woven in Nepal. They are, in the words of the home’s interior designer Karin Thomas of Camden, “like big abstract paintings.” They were the starting point for her other choices for the room.

For the kitchen, which is open to the living room and dining room, Thomas picked a color that is a cross between tomato and barn red. “I just decided the place needed some lift,” she explains. Upstairs, the colors are subdued and restful, but on the first floor she was willing to be bolder. After all, she says, “Downstairs is where you are lively, you cook, and you talk.” Part of the liveliness goes back to Van Dam’s initial concept for the space: it would have a long table around which everyone could gather. The actual table was provided by Jamie Johnston of Jamie Johnston Furniture in Portland. He designed a large walnut table and two smaller tables that, when brought together, extend to 18 feet. Johnston also built a substantial sideboard for the dining room. Aaron Fedarko of Camden made chairs to match, as well as the kitchen stools.

Clearly, the husband doesn’t feel slighted even though he had to wait for a building that represents his modernist aesthetic. “Since we worked with Sam on multiple buildings over seven years,” he says, “you can imagine we found it rewarding, fun, and just enjoyable. Otherwise we would have stopped.”