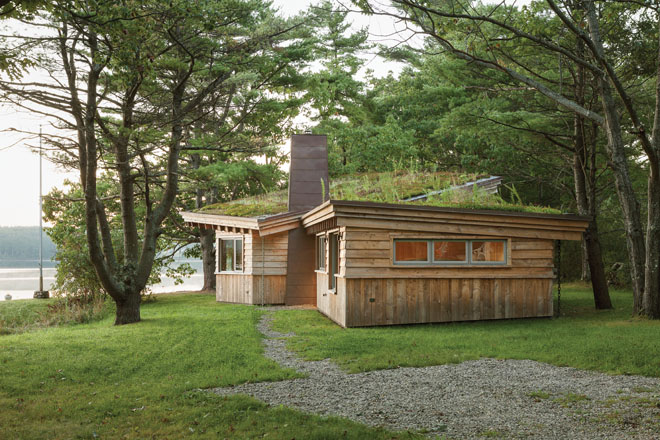 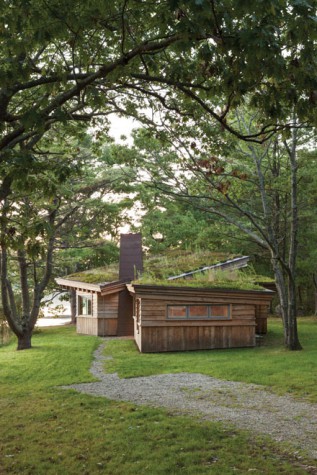 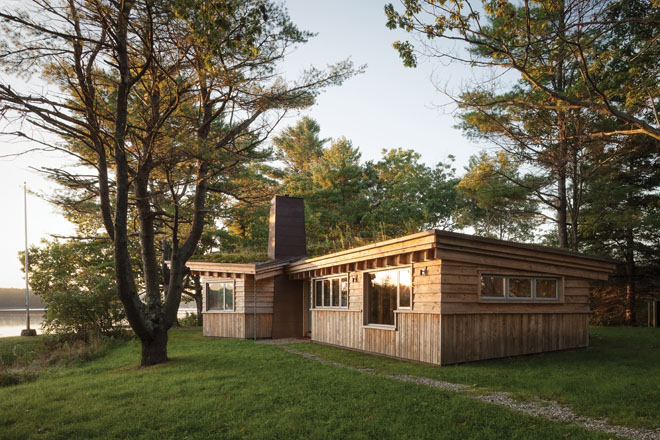 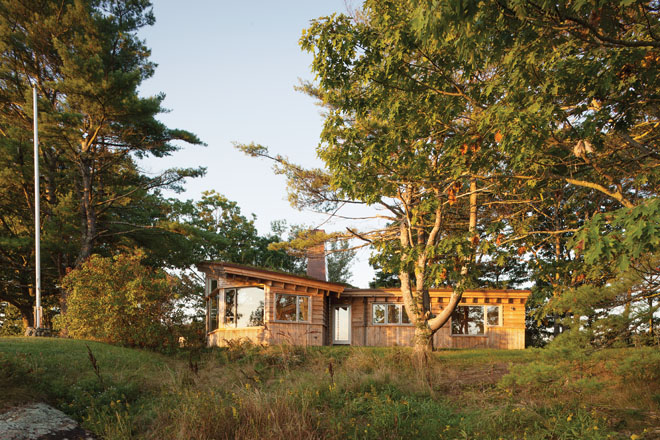 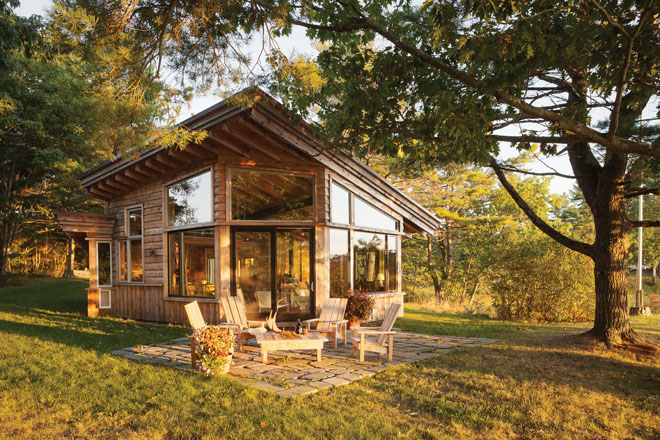 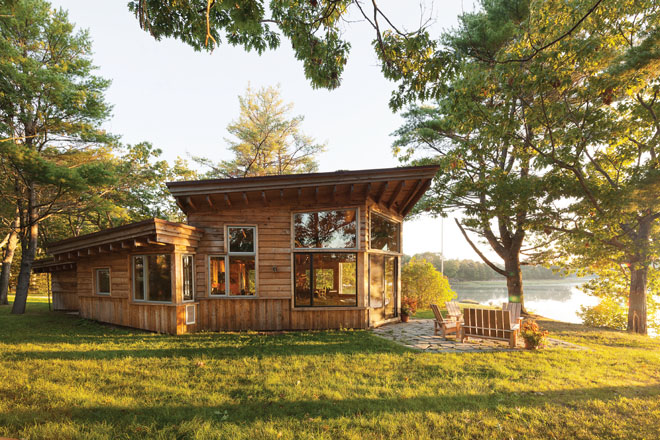 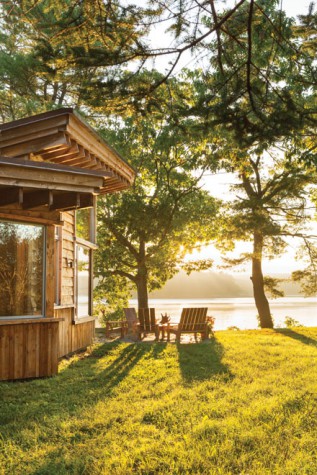 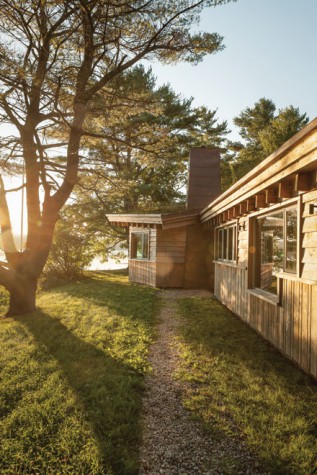 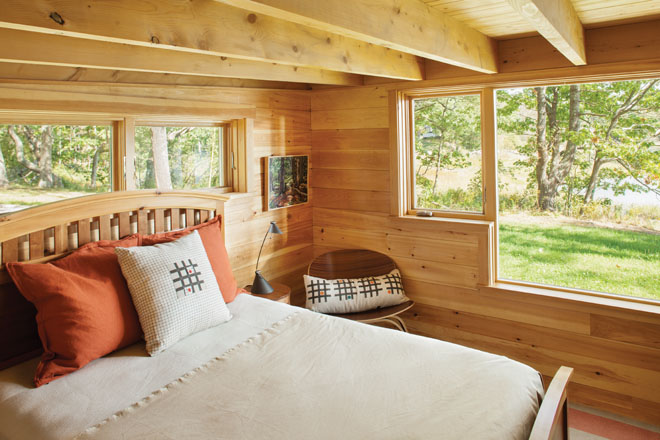 Exposed timbers in the bedroom give the perception of more headroom. “The upper and lower grades of the house meld here, so we wanted to make the ceilings feel a little higher,” says Sokol. 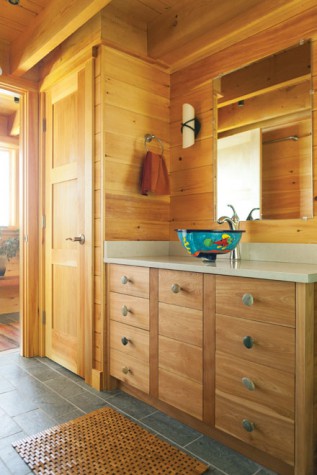 The homeowner found the bathroom sink and shower tile years ago while teaching in Mexico. A large, almost floor-to-ceiling window reinforces the connection to nature. 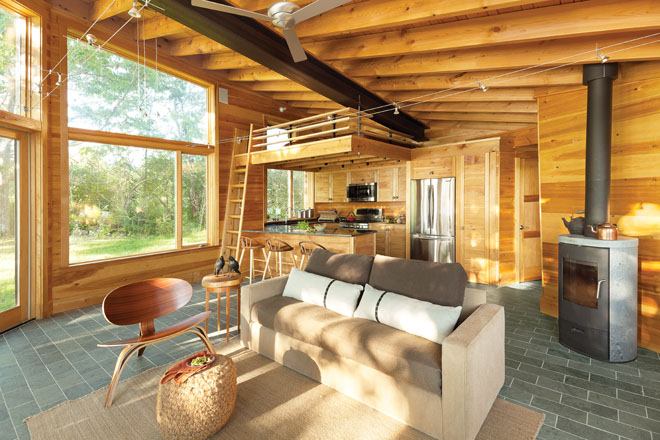 Space had to be maximized within a modest footprint at just over 1,000 square feet. As a result, the living, dining, and kitchen areas are open to one another, with a sleeping loft cleverly tucked above the kitchen. 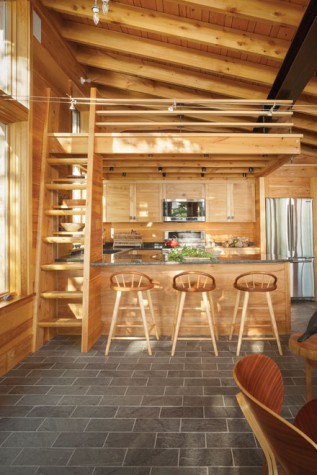 Flooring by Sheldon Slate was a creative solution on a limited budget. “We couldn’t do huge tiles,” says Sokol, “so we did smaller rectangles of slate, and the effect is just as cool.” 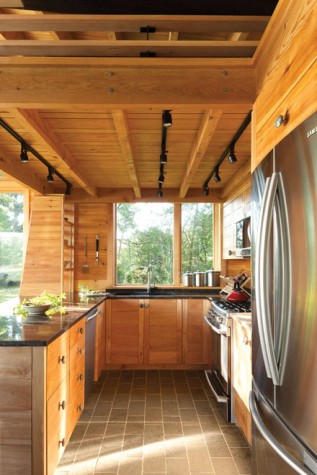 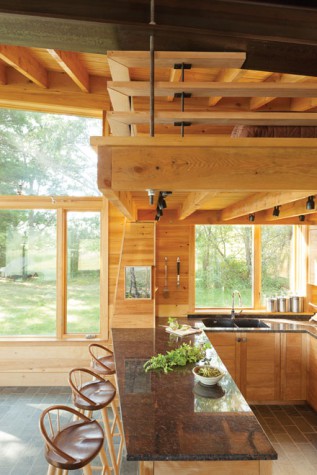 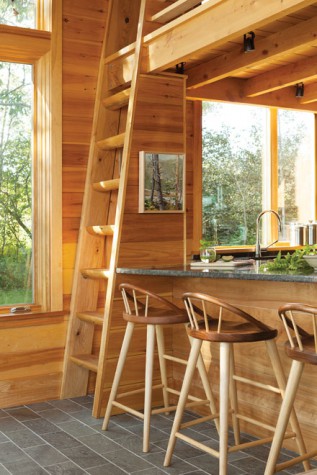 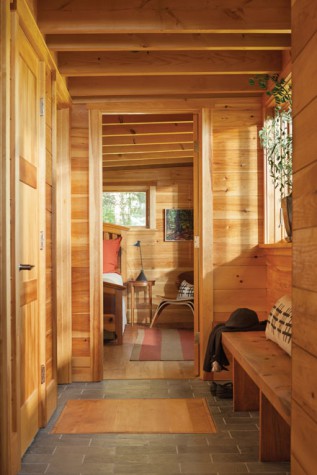 The house’s mystique begins on the journey there.

On winding roads, you’ll catch glimpses of rocky ledge, shimmering water, and thick forest. You’ll drive through an open field, and before taking a sharp right into the woods you’ll wonder if you are on the right path. Then in a clearing a small, angular house will emerge—a gateway to the narrow peninsulas and islands beyond. You’ll feel secluded, but connected to the water at every turn. The low-profile structure is quietly camouflaged with help from its green roof and wood siding. It looks like a fairy house—something taken more from the imagination than reality.

The homeowner calls it trollstua, a Norwegian word that loosely translates to “troll den.” In Scandinavian folklore, trolls are mythical creatures with mystical supernatural powers that live in cave-like dwellings in the forests and mountains. In her native Norway, people often have cabins—or hytte—in the mountains or by the sea, where they can escape from day-to-day life, just as the trolls were thought to. She wanted her own hytte: a retreat from the hustle and bustle of the world, a place of tranquility and beauty juxtaposed with mystery and surprise.

The homeowner, an ecology professor, first started visiting Maine when her parents bought a small summer cottage on Peaks Island. Her brother followed soon after. “I quickly fell in love with the beauty of Maine’s natural landscape,” she says. “The rocky coastlines, the moss-laden majestic forests, and the opportunities for kayaking, hiking, sailing, biking, and other outdoor activities.” While looking for a cottage close to family, she stumbled on a piece of land on the banks of the New Meadows River. Undeterred by an old, sagging trailer propped up precariously on cinder blocks, she saw her future on the open property. The sea was nearby, and she found that the tides brought with them an ever-changing wildlife scene. As an ecologist, she appreciated that the environment surrounding the property seemed to be in a continual state of change, and the property was sufficiently set apart from other houses and roads, making it possible for her to totally immerse herself in the environment. After spending a few summers there, she decided to build a new camp. Her goals were modest: create a bright, comfortable, energy-efficient, year-round structure on a tight budget.

The homeowner’s brother recommended architects Will Winkelman and Eric Sokol of Winkelman Architecture and builder Ron LeBlanc, having worked with them before. At the first meeting, an hour-long brainstorming session ensued. “The sparks were flying,” recalls the homeowner. Although she had some initial ideas, the insights provided by Winkelman, Sokol, and LeBlanc both expanded on and solidified her ideas, and by the end of the meeting they had a sketch of what her future home might look like.

The homeowner wanted an open floor plan, a functional common area outfitted with ample windows, and sufficient space for guests. She also wanted the house to appear as though it were part of the landscape—”nothing too obtrusive.” The dwelling would also be heavily timbered, “held down like a cave.” Recalls Sokol, “We looked at a lot of books of Scandinavian cottages, and there’s this aesthetic of heavy timbers, natural wood, and grass roots everywhere.”

With this clear aesthetic in mind, the architects set to work on the design. There were some givens: much of the house’s unique shape and small footprint (just over 1,000 square feet) were dictated by the site and shoreland zoning regulations. Only a minimal increase in volume was permitted, so the design was angled toward the best views and most abundant sunlight. Another challenge was working around the trees. “The idiosyncratic shape of the plan evolved by squeezing the owner’s program into a very zoning-limited footprint, and then forming that around the existing trees on the site so that none would have to be cut down,” explains Sokol.

Because the permitted volume was constrained by zoning limits, a traditional gabled roof form would have been wasteful, according to Sokol. Instead, the new structure would have a shallow pitch and a flat roof to squeeze down the overall volume. Toward the back of the house where the bedrooms are located, the roof would be almost flat; in the living and dining areas, it would twist and angle up more dramatically to let sunlight and panoramic river views flood in.

Since traditional roofing materials are not well suited to flat, twisting roof forms, the architects came up with an alternative solution: a planted roof. The homeowner was intrigued by the idea, especially considering that many of the cabins in the mountains of Norway have green roofs. And after learning about the benefits, she was on board: a grass roof would blend in with the natural surroundings, reduce runoff, and boost the R-value of the already superinsulated building envelope. Ever the ecologist, she loved this idea.

Not only did the twisted plane of the house necessitate a creative roof solution, it also required an exceptional handling of materials and a high level of craftsmanship from builder Ron LeBlanc. “Because the plan was so tailored to the features of the site, there were very few right angles, and the wood species we chose to keep costs down were not easy to work with.” At around $260 per square foot, the modest budget was maintained by using hemlock rafters, pine paneling, and tamarack siding, clapboards, and trim—relatively inexpensive materials that can be difficult to manipulate, especially in large sizes. “Everything is really robust, with chunky dimensions,” says Sokol. “The scale of the finishes is deliberately exaggerated to emphasize the small structure’s strong and unique relationship to its natural surroundings.” Instead of hemming and hawing over these construction challenges, LeBlanc and his team were invigorated by them. “They’re such great craftsmen,” says Winkelman, “and they kept open minds when we pushed the envelope together and got to do some of the more architect-y things we don’t often get away with.” In addition, almost all the interior and exterior finishes were sourced from local mills and quarries, in keeping with the green spirit of the home and the modest budget.

When the project was complete, the homeowner threw a planting party. She invited friends and family and everyone involved in the design and construction. She served paella cooked over an open fire, and trays of plants were lined up. Friends climbed up to the roof with seeds and plugs—sedums and even some grasses from the ground below—planting roots in a living roof that will grow alongside the homeowner. “Oftentimes, projects just sort of taper off,” says Winkelman. “The painter walks out the door and the homeowner moves right in. This was nice closure. The literal capping off of the project.”

From a bench overlooking the water, the ecologist watches her slice of nature. Blue herons elegantly walking along the coastline looking for fish and occasionally diving into the water. Seagulls dropping blue shells on the rocks over and over until they finally crack open. The constantly changing sea and skyline. As in the legends of her homeland, she has found her place of seclusion, tranquility, and mystery.

• Cabinets made in Maine from locally milled red birch