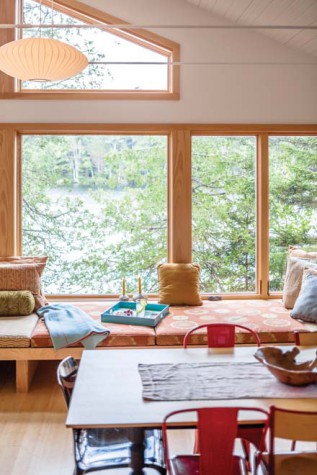 This part of the house was originally a pine-paneled sleeping space with a couple of tiny windows. Now, daybeds line the perimeter overlooking the lake, giving the feeling of being on a boat. The seats are made of twin-sized foam slabs to double as beds for guests. 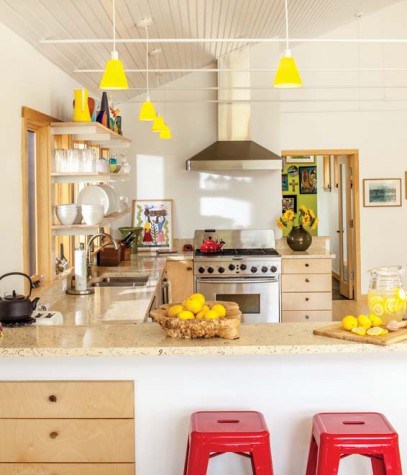 The kitchen countertop is a mix of mussel shells, sand, and epoxy made by New York–based Durite. The rack shelving system on the windows provides a view to the entry and lets additional light into the room without sacrificing storage space. Built-ins on the dining side of the island make wise use of space. 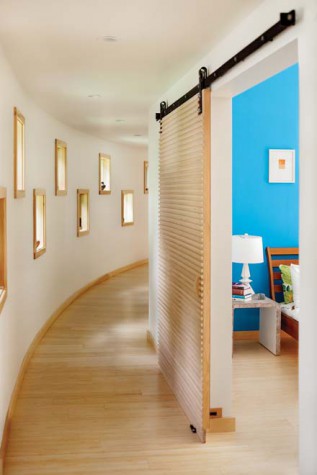 The curved hall, architect Stewart Brecher’s favorite element, gently brings you around to each of the sleeping quarters. “With the beautiful views to the south, we had to do something fun with this north wall,” he says. “By placing the windows at two different heights, it lets you know there’s something else happening around the corner.” Builder Tobin Peacock made the sliding barn doors by applying strips of Baltic birch plywood to plain door panels. 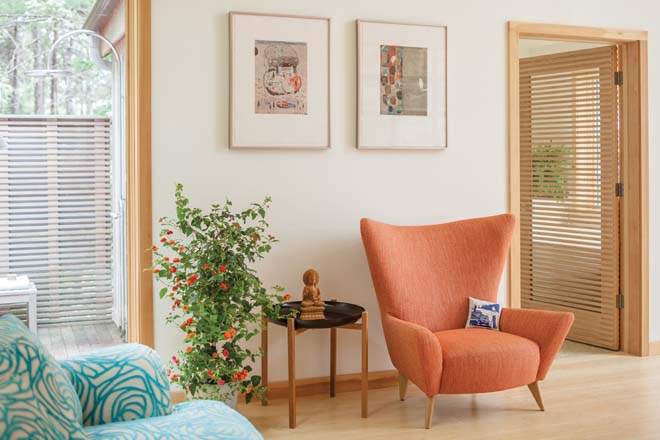 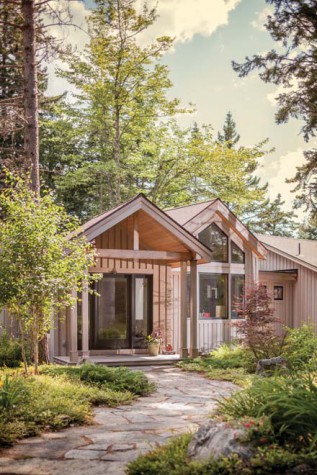 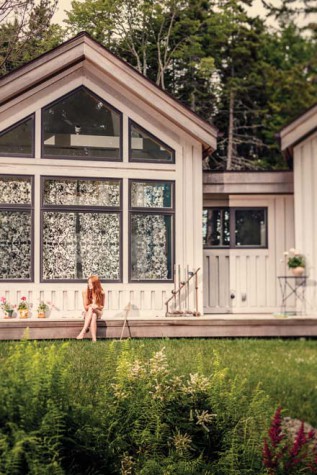 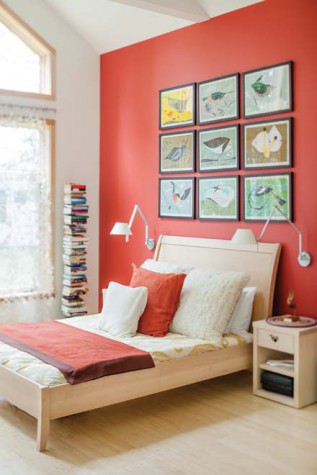 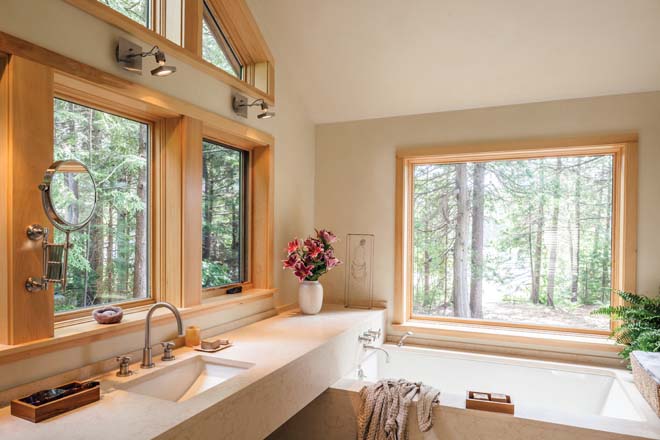 The goal in the master bath design was to balance privacy with a connection to the outdoors. 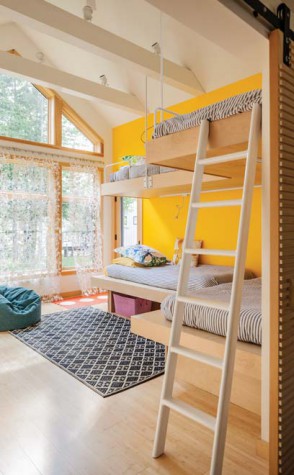 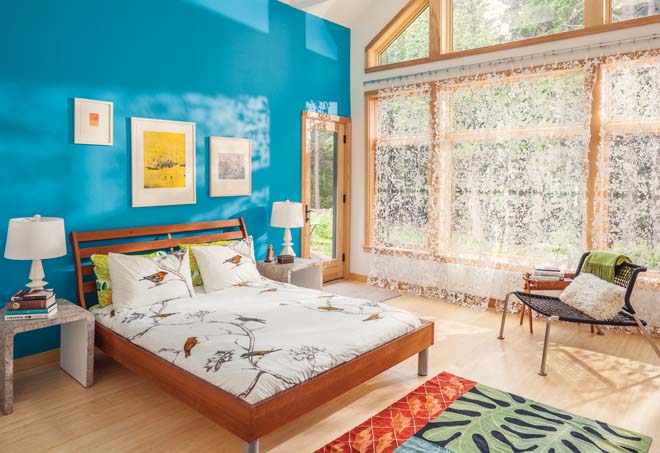 The homeowner was not shy with color. She wanted each guestroom to have its own separate identity, according to the architect. 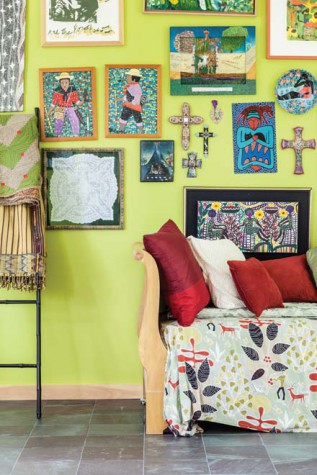 The homeowner’s eclectic art collection pops against a green wall in the game room. 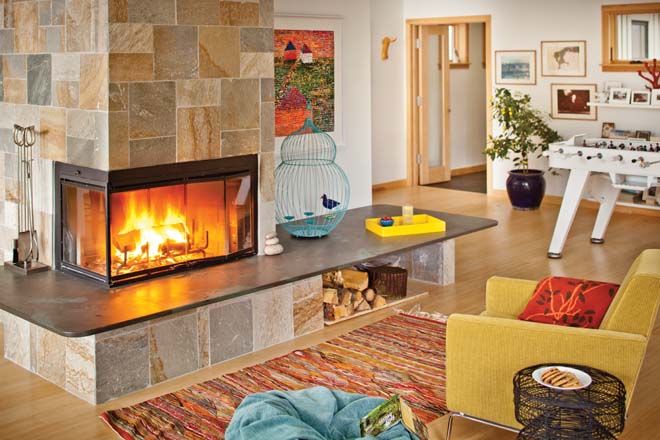 The living room was designed to be a flexible space that can change with the company. In keeping with the open plan of the home, the team looked high and low for a contemporary fireplace made of traditional materials. The granite tile fireplace with a shelf for sitting was perfect. 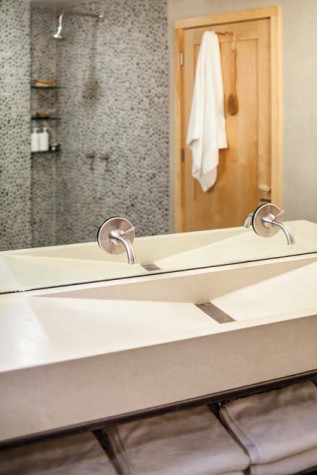 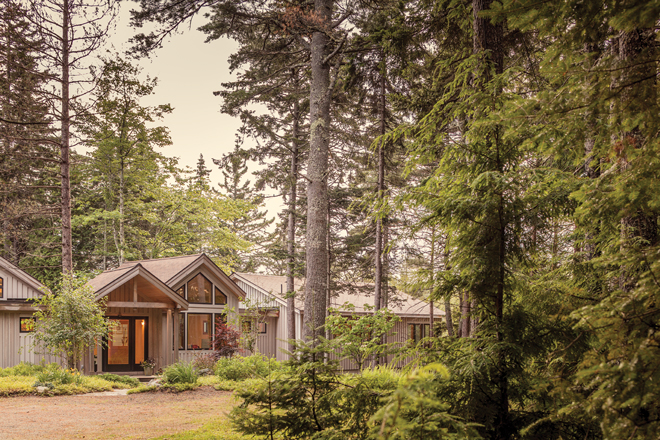 By breaking up the house into a series of smaller “Monopoly-size houses,” architect Stewart Brecher helped keep the scale well within that of the mature trees and the original single-story camp. The reverse board-and-batten picks up the pattern of the surrounding slender spruce trees.

Going to camp is a Maine ritual. The first visit of the summer is an antidote for weary senses: the stillness of a lake at dawn, the sounds in trees after the sun goes down, the scent of pine, the wetness of early morning grass on bare feet. The seasons don’t discriminate, and winter brings its own set of sensory joys: the crunch of snow, the smokiness of the wood fire, the slow, slippery first steps on frozen ponds.

For one family, camp is down a long, narrow road barely wide enough for two cars that winds along a lake on Mount Desert Island. It’s the kind of camp road where you’d expect to see names posted on handmade signs nailed to trees. They’ve been coming here for 40 years, although “here” looks a lot different than it used to.

The family’s original camp—a single-story, ranch-style cabin with a wood frame and small windows—was built in the 1950s. The inside was covered in knotty-pine paneling and, up above, fiberboard ceiling tiles. It was small and cozy or, if you prefer, “dark and poky,” as caretaker and local builder Tobin Peacock of Peacock Builders puts it.

After inheriting the camp from her father, the homeowner decided to remodel. “I wanted to keep the cabin intact but update it,” she says. She had an attachment to the place, but not the structure, which was falling apart. She called a few builders in the area and all their recommendations pointed to architect Stewart Brecher of Stewart Brecher Architects in Bar Harbor. Armed with his intimate knowledge of the property from looking after it for so many years, Peacock would oversee the construction.

As is often the case with a remodel, the design evolved as the project got underway, but the end goals remained steadfast throughout: take advantage of the views, use natural materials that respect the local environment, and create a home that would be as comfortable for one or two people as it would be for larger groups of visiting friends and family.

What had been the original camp’s biggest advantage—its proximity to the water, since it was built in the days before shoreline zoning regulations—had now become its biggest obstacle. The homeowner was hoping to add space for extended family and to be able to sleep as many people as possible. But where would these bedrooms go? There was a clearly defined limit to what they could add, given the waterfront restrictions. The team would have to get inventive.

The first step was determining how much of the existing structure to save. Because of the camp’s sentimental value, Brecher decided that adaptive reuse was in order. His original concept was, naturally, to add a second story. But codes permitted only a 30 percent expansion in floor area or volume. “Since the original building was quite small, there wasn’t a lot of opportunity to expand,” explains Brecher. “There was a fair bit of floor area because of a substantial deck, but there wasn’t any volume associated with it.” Brecher started looking at the site more closely and realized that it would be possible to use the 30 percent expansion to increase the footprint past the 75-foot setback and legally provide significantly more space—not to mention additional flexibility for the design. A new plan took shape: use the significantly increased footprint and build larger bedrooms and baths beyond the setback. Rather than build up, they would build back.

This solution called for a creative floor plan. “Once we decided to abandon the second-floor addition concept, it became a different project,” says Brecher. Instead of making a modest ranch house a little more comfortable, they could create a new house with an organized theme that could accommodate family year-round. “We needed to find a way to create private and public spaces, stretch the building footprint beyond the setback, and take advantage of the proximity of the lake in the existing house,” explains Brecher. The original structure was reconstructed to accommodate a new open-plan living, dining, and kitchen area, and the addition beyond the setback would contain a game room and three bedrooms and baths. “We adopted a theme for each of the new spaces, connected by a curving corridor with each space articulated both inside and outside,” he says. This curved bend of “tiny Monopoly houses”—each a bedroom—created a south-facing courtyard while giving distinct identity to the individual spaces along the way. “The separation of the social spaces from the sleeping spaces,” says Brecher, “allows for multiple users to participate or opt out of group activities.” And the southern courtyard and encompassing deck, which are sheltered from the north wind, provide a usable outdoor living space throughout the year.

The approach brought its own set of construction challenges for Peacock and his team. The design required a new foundation and significant structural roof bracing to accommodate an open floor plan. “Putting a proper foundation under an existing building that we were not able to move in any direction except up was a challenge. Not to mention framing during the winter,” says Peacock.

In keeping with the homeowner’s desire to blend the home into the surroundings, natural materials were used wherever possible. The house is sided with reverse board-and-batten cedar siding stained to mirror the bark of the surrounding trees. Inside, the use of wood continues with bamboo floors, beadboard ceilings, and clear-finished white-pine trim, cabinets, and built-ins. Generous natural light and access to the outdoors from all the major rooms blurs the line between indoor and outdoor spaces. In addition, a diverse palette of stone and slate pays homage to the surrounding environment.

Today, the family spaces—the living room, dining area, and kitchen—can be found where the original camp once stood. And when the house is filled with kids, nieces, nephews, and siblings, those additional bedrooms and the outdoor space come in handy. The camp, like the family who spends time there, has evolved over the decades, but some things remain the same. The breathtaking view. The togetherness of family. And the feeling that can only come from being at camp in Maine.