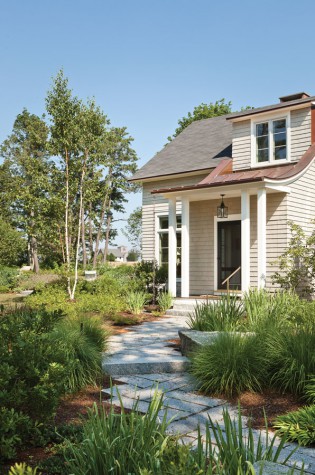 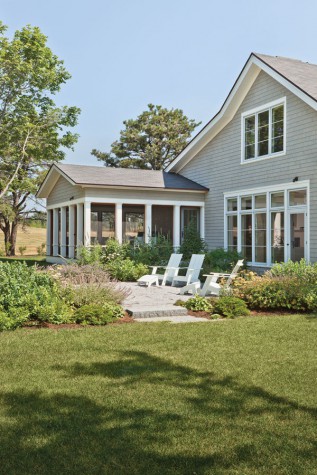 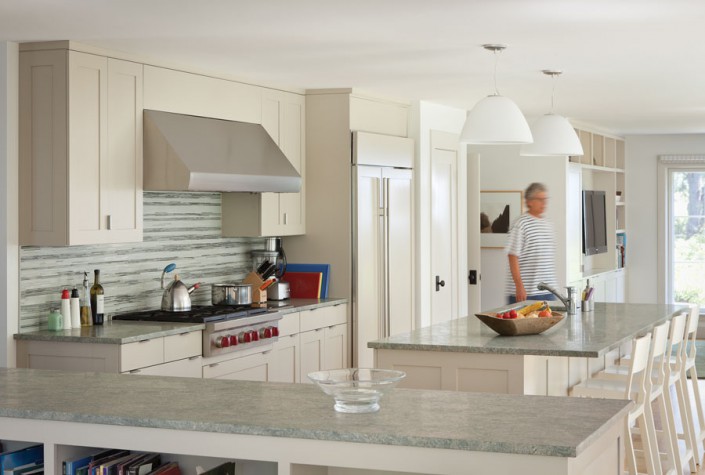 The kitchen cabinetry is painted a “lively neutral” called Parsnip. The granite countertops are from Morningstar Stone and Tile and the backsplash is from Old Port Specialty Tile. 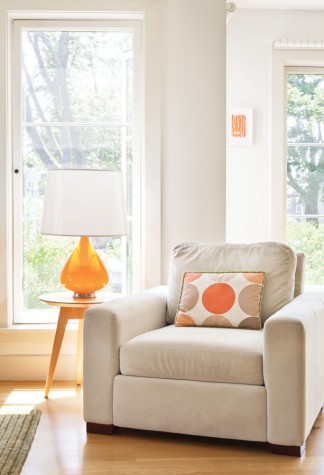 A sunny corner in the sitting room off the kitchen. The interiors are a blend of the couple’s aesthetics: his more contemporary and hers more traditional. Wright-Ryan’s millwork division crafted all the cabinetry for the home. 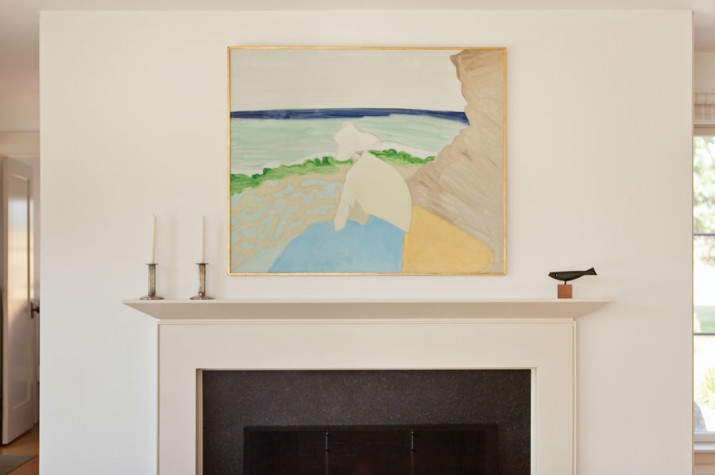 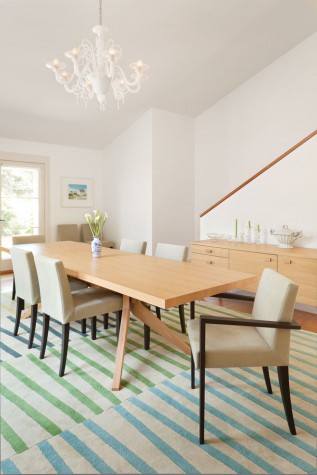 The crisp white of the dining room walls, ceiling, and Italian chandelier is offset by the diagonal line of the stair railing, which was handcrafted out of one continuous piece of cherry. 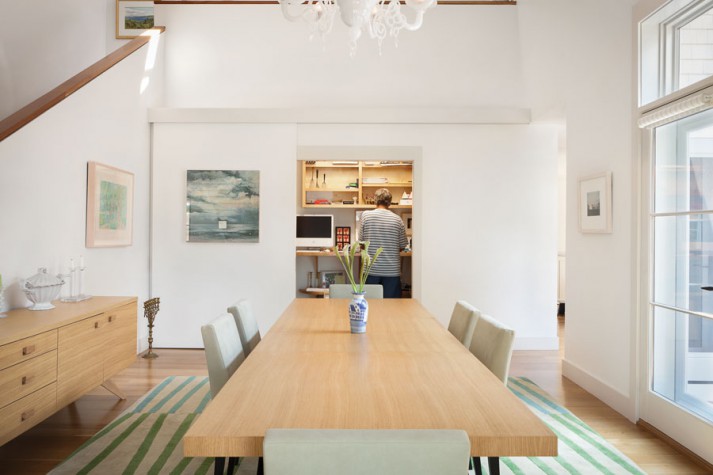 A compact “secret” compartment with a sliding door and a track system that disappears into the wall. 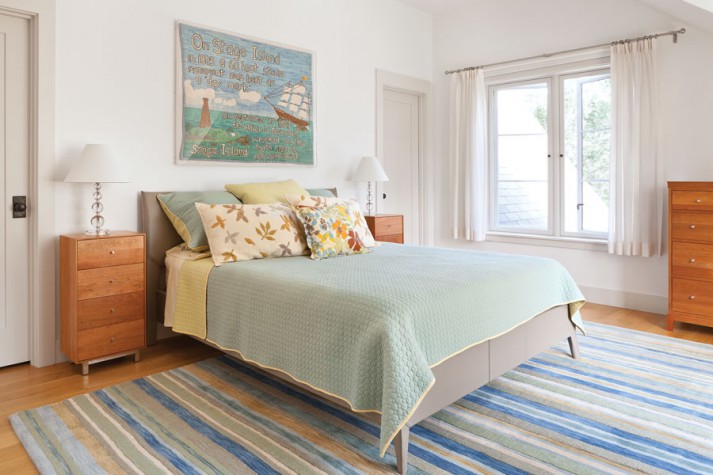 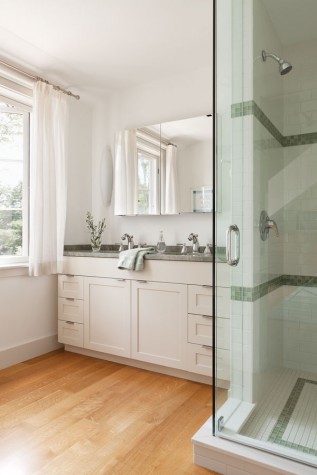 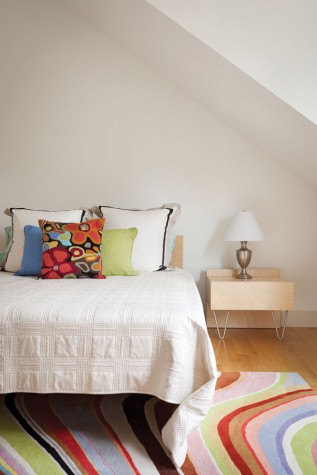 One of the guest bedrooms modestly outfitted with light woods and pops of color. 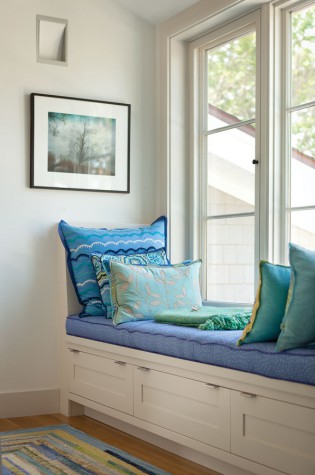 A window seat overlooks the golf course, one of the many built-ins in the house by Wright- Ryan Homes. “The millwork reflects the clean lines of Sam and Steve’s design,” says project manager Don Hawkes. 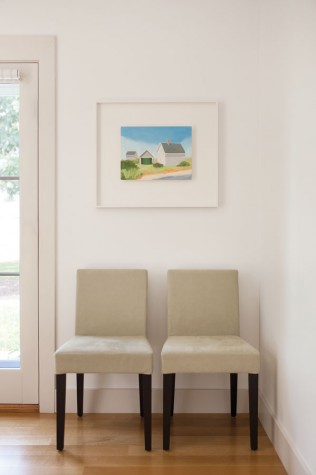 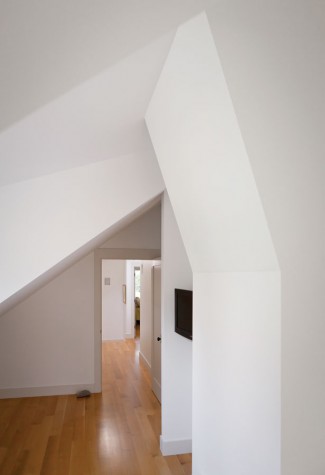 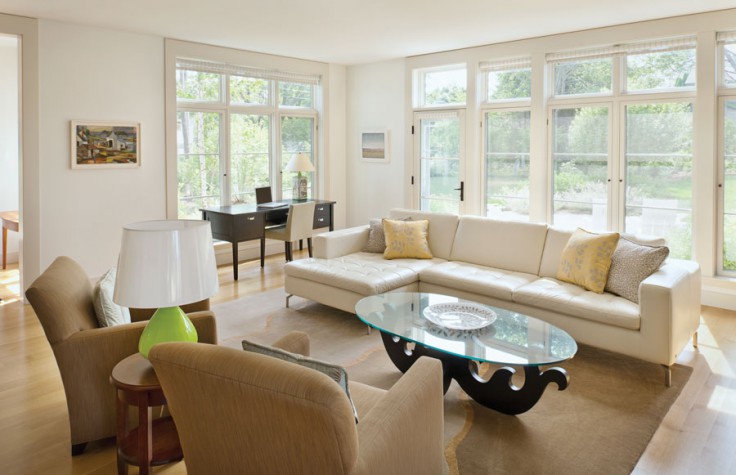 The living room gets drenched in natural sunlight. Walls of windows ease the transition from inside to out. Says Van Dam, “The homeowner wanted a place where he could store his art materials and integrate the home controls, but he didn’t want it to be part of a room or a built-in.” 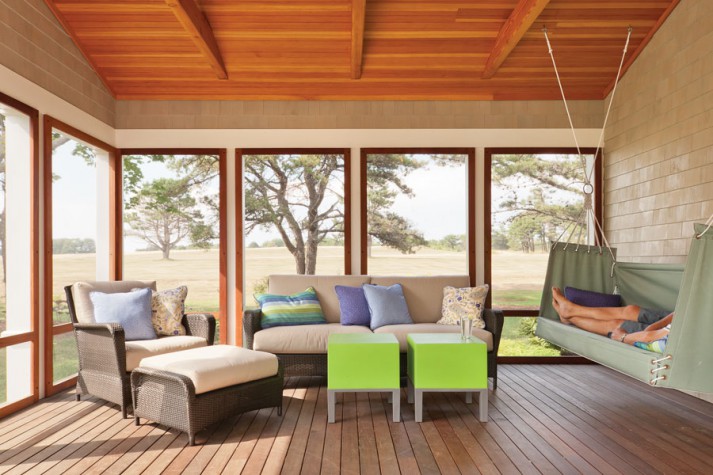 From the screened-in porch (opening spread), the homeowners enjoy views of Abenakee golf course, “a beautiful backyard,” they joke, “that we don’t have to mow.” 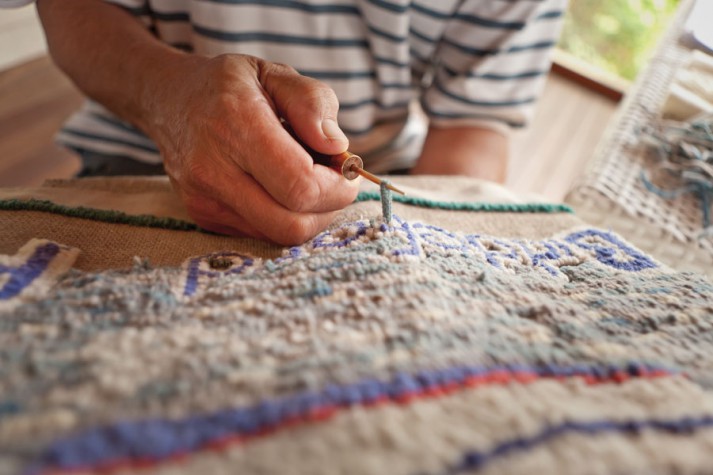 Levy makes hooked rugs starting every spring, each one with a different Maine theme. 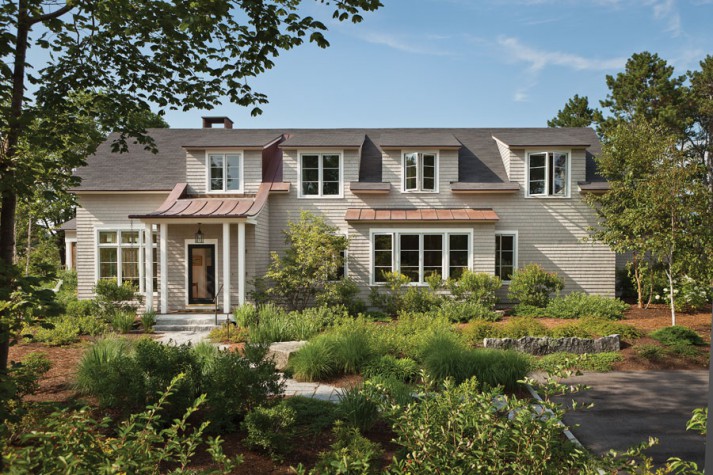 The yard was designed by landscape architect Todd Richardson of Richardson and Associates Landscape Architects. One of the biggest challenges, according to architect Sam Van Dam, was reconciling the house’s open interior spaces with a more traditional façade. Larger paned windows were the solution. 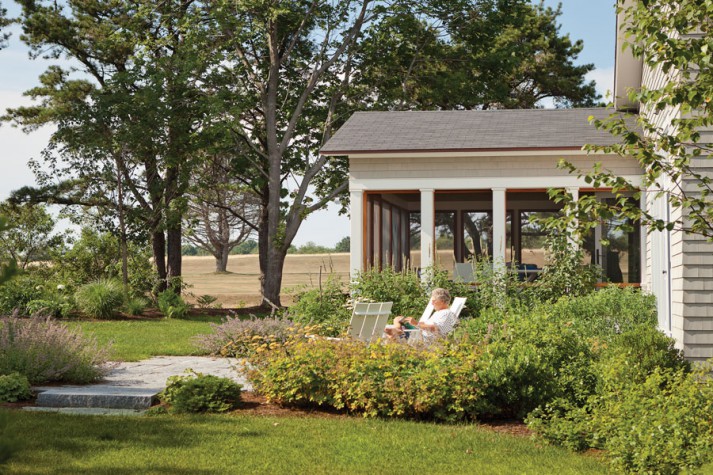 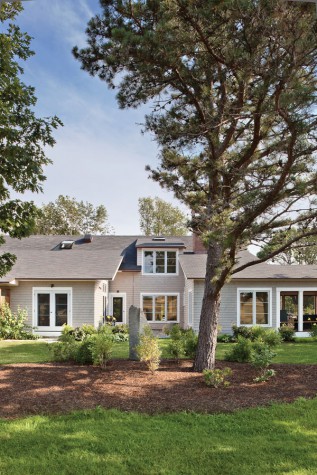 Lured from their home outside of Boston, Dana Asbury’s family started coming to Maine in the early 1960s. Having grown up in Cincinnati, her parents felt right at home in Biddeford Pool, a community that, at the time, was flush with other summering Cincinnati families. In 1970, three lots adjacent to the local golf course went up for sale. Wanting to establish more permanent roots in the community, Asbury’s grandparents decided to buy one of the lots. But life, as it often does, took an unexpected turn. Asbury’s grandmother wound up in the hospital, and her grandfather, anxious to get started on their new summer home, hastily picked a prefab house out of a Sears catalog. Distracted with his wife’s health concerns, he couldn’t attend to every detail, and one major piece of the project got overlooked: the house was set down on the lot with the front door facing the golf course, not the street. The house was backward.

Although they loved Biddeford Pool, they didn’t love the house. The two-story Cape was not only randomly placed on the lot but structurally inadequate as well. Eventually, the house was passed down to Asbury’s father, and in 2007 she and her husband, Richard Levy, bought out her siblings. Rather than undergo a massive renovation, they chose to tear down and start over on the lot, donating as much of the original house as they could—appliances, windows, electrical equipment, water heaters—to Habitat for Humanity. It was a bittersweet conclusion, but one that offered a new start.

In love, it is said that “when you know, you know.” You’ll sometimes hear couples talk about how, the first time they met, they immediately knew they would end up together. This deep sense of instantaneous compatibility happened when Asbury and Levy met their future architects, Sam Van Dam and Stephen Pondelis of Van Dam Architecture and Design.

For Levy, an art dealer and gallery owner, and Asbury, an editor, their intuition was enough for them to forgo interviews with other architects. “Intuitively, with the gallery, I know when a certain artist is just right,” says Levy. “I felt that way about Van Dam.” Architects sometimes talk about doing a dance with a client or engaging in a courtship. “Sometimes, these things go on for a long time,” says Van Dam. “But our dance was short and lovely.” The first date sealed it: Levy, Asbury, and Van Dam sat in the backyard and talked about the house. Ideas flowed and long-held dreams gushed out. They talked about their similar-aged children, and the couple came to the conclusion that they wanted to build a house worthy of being passed down to future generations. Right then and there, Van Dam started drawing.

Now that architects who “get it” were on board, the couple chose a builder they had equal faith in: Wright-Ryan Homes. “We were impressed with their attention to detail and their pride in the work they do,” says Levy. Project manager Don Hawkes and superintendent Scott Lewis got right to work on a demanding schedule that would get the new house move-in ready by the following summer. “It’s always a challenge working in the off-season, and that winter was particularly harsh,” recalls Hawkes. “But this is Maine. That’s what we do.”

As far as design priorities went, the couple wanted to address a major shortcoming of the original house: it took no advantage whatsoever of sunlight or the coastal setting. “Our goal was light and airy,” says Asbury. Designing for homeowner preferences that were on opposite ends of the aesthetic spectrum—Levy is a modernist, but Asbury is more of a traditionalist—Van Dam and Pondelis (who is now with Attardo Pondelis Architecture) faced a creative challenge: design a home that would be open and light-filled, but that would blend in with the traditional shingled, pitched-roof homes in the neighborhood. “Therein lies the rub,” says Van Dam. “A lot of people want a traditional house on the outside that fits in but do not want a dark house.” The architect’s solution: windows. Van Dam incorporated windows with repeating panes of glass that were 18 inches high by 22 inches wide. “It’s that module of the glass that lends a traditional sense of scale,” explains Van Dam, “but the inside, which is so wide open, is not compromised by a lot of dense mullion work.”

Another key design consideration was the relationship between external environment and internal design. “There is really no difference in my mind between the two spaces,” says Van Dam. “The relationship of inside to out is about continuous space.” The homeowners hired landscape architect Todd Richardson of Richardson and Associates Landscape Architects in Saco to create the exterior “living rooms,” including the side-yard garden and a screened-in porch overlooking the golf course. Richardson chose native plantings exclusively, including three different kinds of blueberry bushes. “We wanted a little bit of privacy,” says Asbury. “And I love the way the house just sits on the lot and looks like it’s always been here.”

With plans to spend more extended periods of time in Maine, the homeowners also had efficiency on their minds. Wright-Ryan Homes employed an innovative insulation technique that uses Styrofoam forms in the foundations—a system that, according to Lewis, is gaining in popularity because it integrates well with high-efficiency envelopes. The house was full of firsts for the construction crew. “This was the first house where we actually put a skin on the outside—polystyrene insulation—which makes a huge difference by creating a thermal break between the framing and siding,” says Lewis. “It was different from how I’ve always built, where you’re hanging all of your siding and windows basically off of this insulating system. We had to come up with some unique ways of counteracting that.” With an energy-efficient envelope and a foundation of insulating concrete forms (ICF), the house is tightly sealed and comfortable even on the coldest days.

Rather than using steel beams to span the wide-open living areas, Wright-Ryan employed beams of manufactured parallel strand lumber (PSL)—”always nice for carpenters to work with,” says Lewis. All the floors throughout the home are of quarter-sawn white oak, which is a good choice for the radiant heating underneath. And in keeping with the fine craftsmanship throughout the home, Wright-Ryan’s millwork division created all the kitchen and bath cabinetry, as well several built-ins throughout the house. “The millwork reflects the clean lines of Sam and Steve’s design,” says Hawkes.

For the couple, sitting in their new home on the lot that Asbury’s grandfather purchased more than 40 years ago, the past is still present. Yet Asbury and Levy can’t help but talk about the future. “This place is really special to us,” says Asbury. “Our kids have been here every summer of their lives. As much as this house is for us, it’s for them someday, too.” A legacy has been reborn. Asbury’s grandfather would be proud.