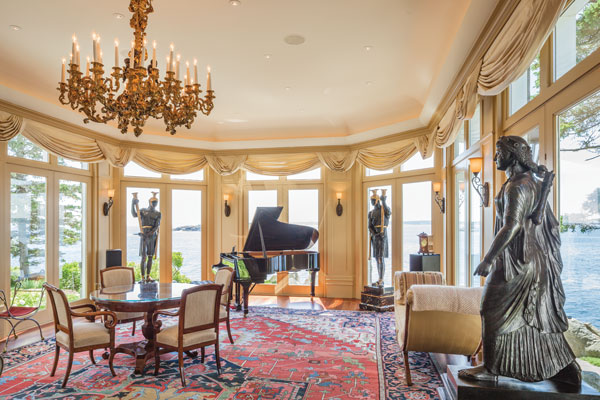 The salon, which is shaped like the prow of a boat, has Bidermeier furniture, statues, a grand piano, and an eighteenth-century French chandelier. 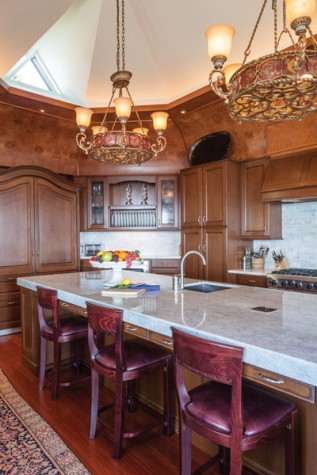 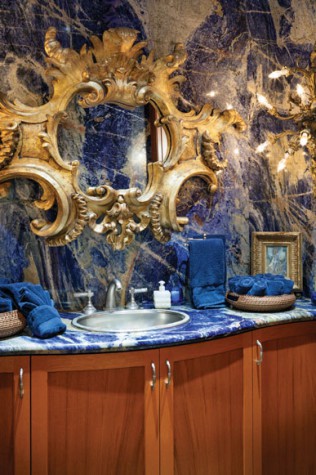 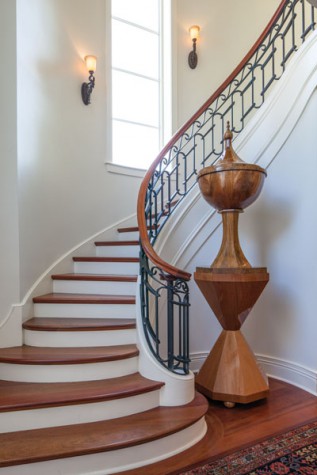 One of the home’s two elegant, sweeping staircases built by Dan Bloomer of Bloomer Kucci Stairbuilders in Winslow and Ventura Staircase & Woodturning in Biddeford. 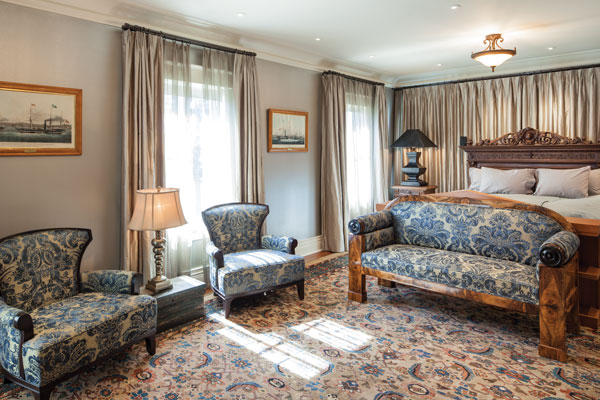 Interior designer Rodica Mirea was inspired by the grayish-blue color of South Song’s slate roof tiles when she outfitted this guest room. The blue paisley fabric on the couch is a vintage pattern woven especially for the homeowners. 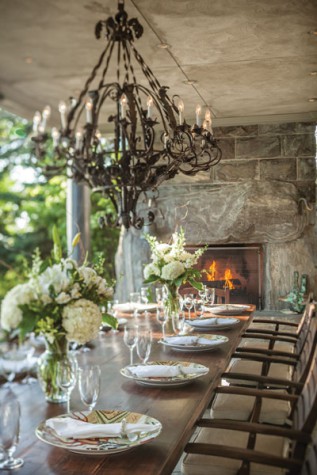 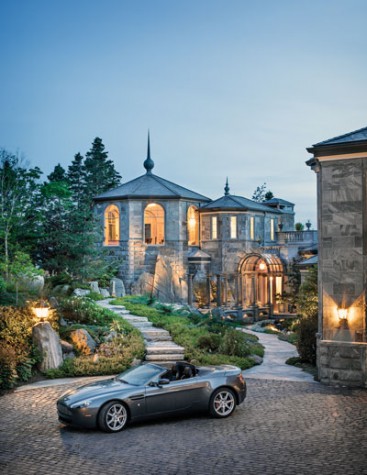 The front entrance to South Song, a contemporary stone castle complete with turrets and moat. The boulders surrounding the walls—and in some cases affixed to the walls—are meant to suggest that the home rose from the natural ledge on which it sits.

A feat of craftsmanship in Southport.

South Song is the Southport summer home of a philanthropic Houston couple. It is also a castle. Or, better said, an Italian villa. No, a Gatsby-esque estate. It depends on who is doing the talking. One person calls South Song “a dream.” Others say it is “over the top.” Still others call it “grand,” “elegant,” or even Boothbay’s “economic recovery package.” It was built over the course of 18 months, from 2008 to 2010—dark days for the building industry. Catalano’s Construction of Thomaston estimates that at one point there were 250 people working on the house—100 on-site and another 150 off-site. “It was crazy,” Michael Catalano says, gesturing to a four-car garage that now holds model airplanes and a Mercedes. During construction, it was employed as a workshop for finish work. “You’d have 25 guys lined up to use the table saws.”

After the gates of South Song part and you spy the stone home with its towers and finials, after you hear the man-made waterfall splashing noisily into the moat, and after you see the drawbridge with its reddish stone columns, your eyes inevitably focus on a glass-and-bronze canopy from which hangs a green lantern. This is the front entrance. “When you had an invitation to a ball, your escort was to bring a lantern to light the way to the terrace,” explains Houston-based interior designer Rodica Mirea. Thus the fixture. A ball? Somehow, South Song seems to edge right out of reality and into the purely fanciful. Have you left your car in the driveway? There are plenty of details to suggest that you actually arrived in a liveried pumpkin—the fully functional antique cannons that dot the property, the two full suits of armor in the front foyer, the elaborate antique chandeliers, and the domed ceilings finished with real gold leaf.

Perhaps the most fanciful detail? Originally, the house was going to be shingle style. But then designer Mihai Angelescu of DesignBuild in Houston started to think about how to get the most “useable volume” on the building lot. He was inclined to a flat roof, so as not to waste interior space on attics and overhangs. He knew the boat-loving homeowners wanted a “yacht-quality interior” and a bar like one they’d seen in the movie High Society. All this led Angelescu to abandon ideas of Maine vernacular and to think in terms of Newport mansions.

The house Angelescu designed is a series of pavilions that snake along a high granite ledge overlooking the sea. There are no hallways. Instead, octagonal rooms lead one into another, like galleries in a museum. The house has 92 corners, and most rooms have at least three exterior walls. Angelescu wanted each room to have its own personality. Thus a formal salon—with Bidermeier furniture, European statues, and grand piano—is shaped like the deck of a ship. A Robert A. M. Stern–inspired dining room has frothy, silk-taffeta drapes and a lavender ceiling that looks like an upside-down flower. A downstairs powder room of sodalite blue marble is meant to have an underwater feel. Next to it, there is a screening room with walls of deep-blue silk and mohair velvet. After the overhead lights dim, fiber-optic lights on the ceiling suggest stars. The moss-green massage room has marble sinks and walls finished in stucco Veneziano to look like marble. Angelescu studied a book about the private kitchens of the best chefs in America and then incorporated the most desirable features into the central kitchen. The room has two sets of cooking facilities—one is in the massive island and one in the kitchen itself—so it can be used for cooking shows. The room is even lighted for such a show. And perhaps the most surprising room, in a home full of surprising rooms, is the second-floor music room with its vaulted domed ceiling of cherry and walnut burl. The space is set up for performances, which can begin dramatically, as there is an elevator to bring a singer up through the floor. The room is an octagon, but not a perfect one, because parallel walls are not good for acoustics.

It hardly sounds like a Maine home, but project manager Tom Catalano calls South Song’s construction a testament to “down-home Yankee ingenuity.” The fast-track time table for the project meant that at times the home was being built faster than it was being detailed. “The architect really relied on craftsmen and their input on the project,” Tom says. “A lot of detailing and stonework was worked out in the field.” The homeowners were so impressed with the result that they made an hour-long movie about the project and presented it as a gift to the designers, builders, and craftspeople.

Among those featured in the movie is landscape architect Bruce John Riddell. When he first met the clients at J.C. Stone in Jefferson, they showed him pictures of what they hoped to do with the landscape. One picture was of a swimming pool at a Seal Harbor house designed by Robert A. M. Stern. “That’s my garden!” Riddell said, and pulled out a better picture of the pool from his portfolio. The homeowners also mentioned that they liked the Vayo Meditation Garden at the Coastal Maine Botanical Gardens. Riddell happened to have designed that garden, as well.

J.C. Stone was going to use Heritage Valley granite for the house and a mixture of Heritage Valley and Oak Hill granite for the landscape. Riddell suggested splitting Heritage Valley boulders and attaching the flat side to the exterior walls, so the home would appear to be rising out of the natural ledge on which it sits. The homeowners liked the idea, so the huge stone project got underway, with J.C. Stone supplying the materials, Joe Delaney of Whipple-Callender Architects in Portland serving as consultant on the exterior detailing, Eric Dube of Casco Bay Engineering in Portland being responsible for the civil and structural design, and Kurt Snyder of Stonescape Masonry in Falmouth executing the actual masonry, including the exterior work, chimneys, columns, entrance bridge, balustrades, and beehive-shaped pizza oven for the outdoor kitchen.

Inside, Lyman-Morse Boatbuilding Company of Thomaston was responsible for the woodwork in rooms with complicated vaulted and domed ceilings. Project manager Jay Ribiero lists off the many woods used in the house: bubinga (an African hardwood) and bubinga burl for the library’s panel work and coffered ceiling, mahogany casework and maple-burl veneers for the entrance to the master bedroom, cherry and walnut burl for the music room’s domed ceiling, and mahogany for the walls and barrel-vaulted ceiling of the kitchen. E.H. Fortner Woodworking in Waldoboro also did considerable additional woodworking, including the bathroom vanities, the caterer’s kitchen, the guest-quarters kitchen, the bar and wine room, and the large model-ship case in the library. In addition to custom built-ins, Lyman-Morse and Fortner were responsible for various freestanding pieces, such as the master bed, which has a flat-screen television on a lift that disappears into the footboard. Dan Bloomer of Bloomer Kucci Stairbuilders in Winslow partnered with Ventura Staircase & Woodturning in Biddeford to build two elaborate, sweeping staircases with handrails carved out of solid jatobá wood. Timothy Greene of StandFast Works Forge in Parsonsfield fashioned the iron balustrades on the staircase. Louise Hurlbutt of Hurlbutt Designs in Kennebunkport assisted with drapery fabrication and upholstering. And this by no means exhausts the list of those who contributed to the home.

Many of those who worked on the house say the project gave them a chance to do things they wouldn’t ordinarily get to do. “We don’t usually have the opportunity in one home to showcase all of what we do,” says Mark Jorgensen of Jorgensen Landscaping in Bath. Among the things for which his crew is responsible: a rooftop garden with piped-in music, a heated driveway, a fire pit, stone seashell benches, stone “riverbeds,” Heritage Valley stepping stones, benches carved into boulders, and plant material, including large copper beeches, Japanese umbrella pines, blueberry sod, and hay-scented ferns. Aware that one of the homeowners has a predilection for purple, Bruce John Riddell placed purple sea glass over fiber-optic lights in the rooftop garden. “You were just encountering things that you don’t see every day,” says Mike Catalano. There are, for instance, speakers in the rocks that surround the house and an insect-repellent system built into the grounds. “It is always fun for us as craftsmen to get to do something completely original,” says Jay Riberio of Lyman-Morse. Although it was a project for Houston clients and by Houston-based designers, Tom Catalano says, “There wasn’t one person on-site who didn’t feel like they had some input. Everyone bought into the project. They put their creative feet forward and challenged themselves. It was a real testament to hardworking Maine people.”