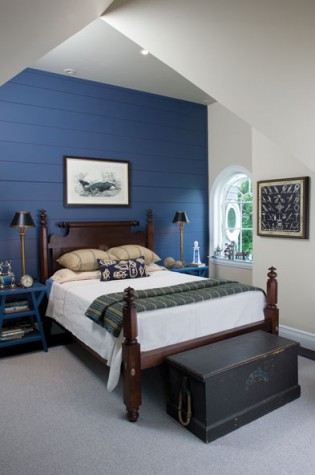 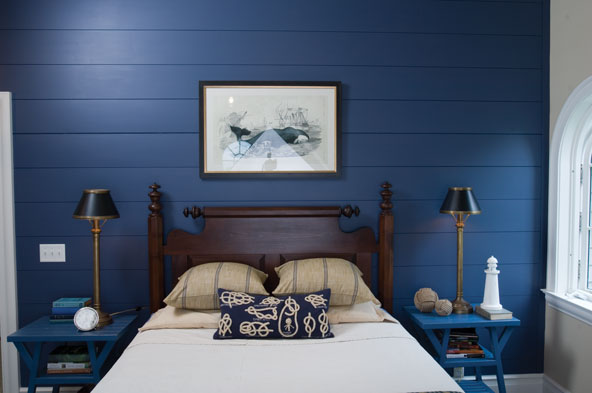 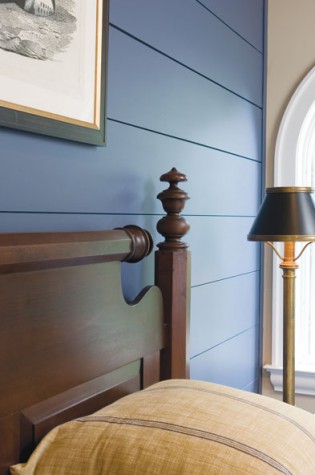 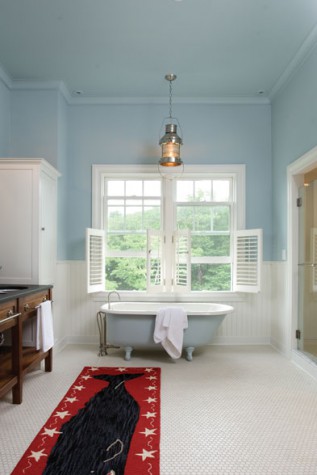 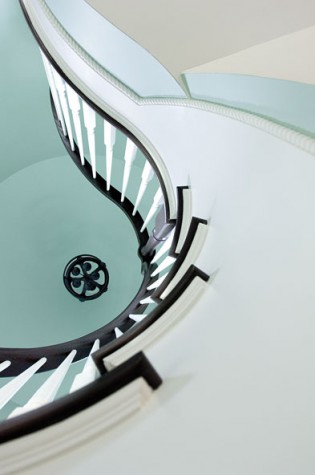 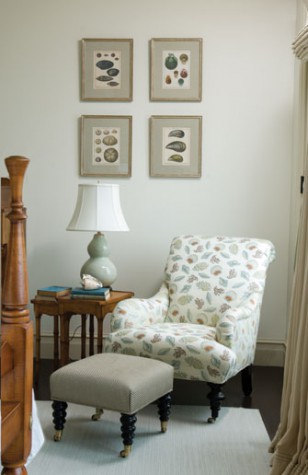 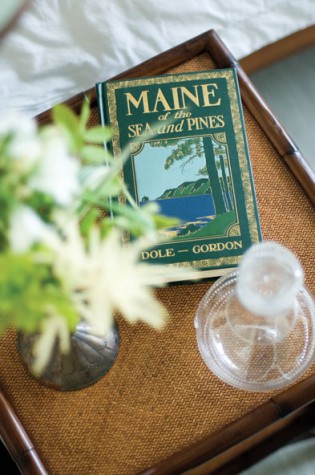 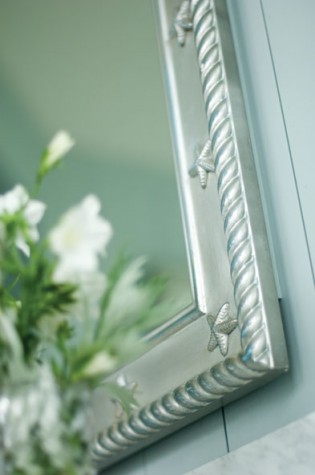 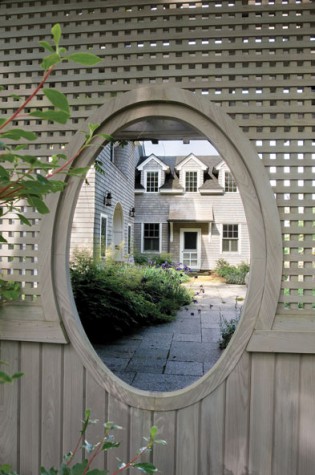 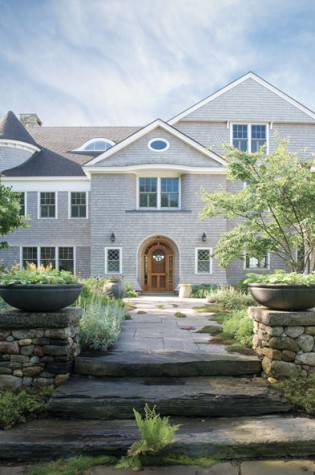 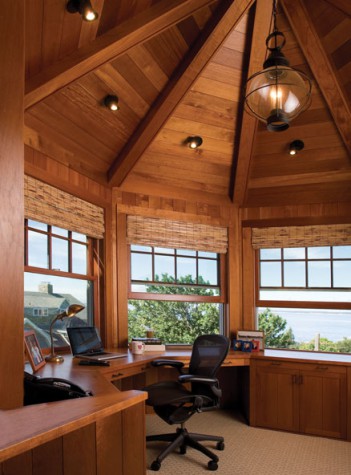 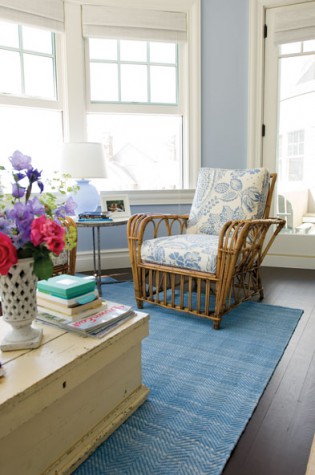 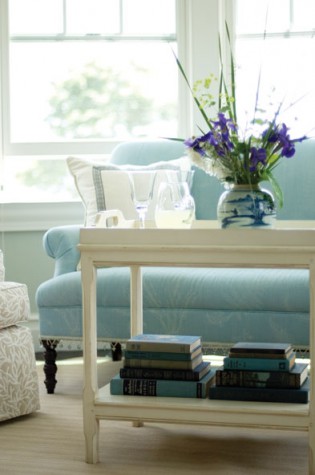 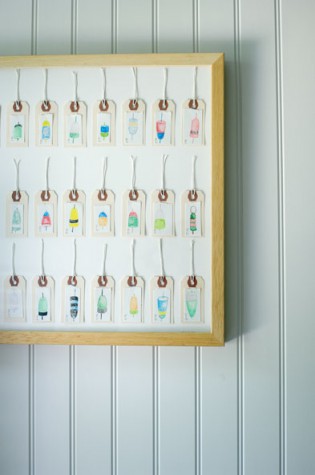 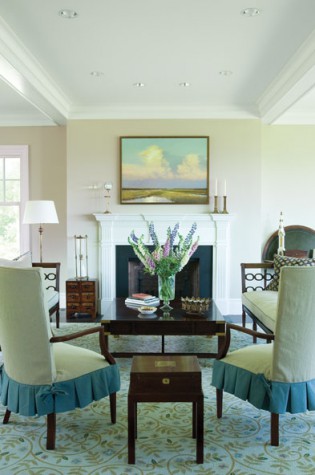 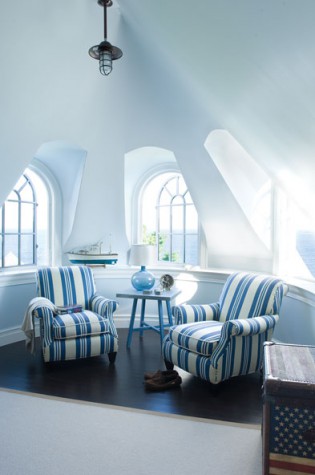 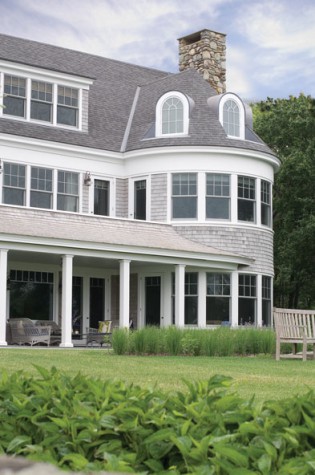 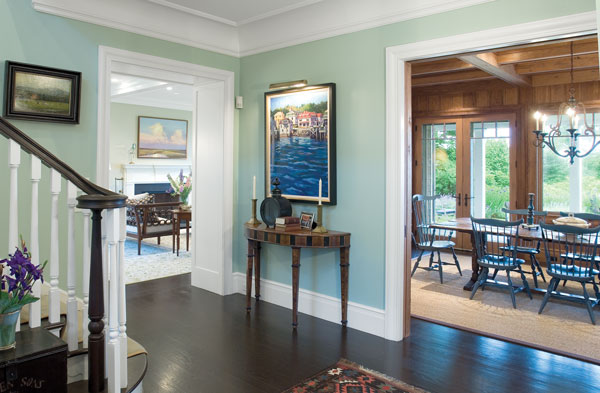 On the southern rim of Prouts Neck, the rambling house, pale gray the color of mist, sits on a small rise. Terraces and a lawn overlooking the water invite leisurely breakfasts or afternoon Frisbee or twilight games of tag. Inside, broad window bays offer nooks for reading or napping on cloudy days. Four dining tables suggest abundant possibilities—feasts for friends or quiet family gatherings.
The house promises—and delivers—an idyll. It is a summer ark, sleek and welcoming and capacious, that feels as if it has witnessed countless summers, though it is replete with twenty-first-century amenities. It was begun only five years ago, constructed in the spirit of the late nineteenth-century cottages that characterize this peninsula jutting into Casco Bay. The couple who built the house have a long connection to Prouts Neck, its summer sports—golf, tennis, sailing, fishing—and its easy way of life.

“It’s simple here,” says the wife. “You can ride your bike everywhere. Kids can be free. My husband’s family has been coming here for a hundred years. They still have a house here.” But generations multiply, and dividing a summer house among numerous offspring becomes higher math. The couple rented for years before finding a suitable piece of land.
Finally, they were able to buy two lots: one, back from the shore, contained an old cottage; the waterfront parcel featured a 65-foot-high World War II concrete observation tower once deployed for spotting enemy vessels attempting to enter Casco Bay. It had evolved into a precarious climbing structure. “It was beginning to deteriorate,” the wife says. “It was becoming a hazard, and it blocked the view. We had to take it down.”

The couple had a clear idea of the house they wanted. It was, the wife says, “something simple, functional, and romantic. We wanted to build a house that our kids could always come home to and bring their families. We wanted everybody together.”

But in this century, time doesn’t stall for two months in the summer. Work goes on, and serious sports continue year-round. Both the husband and wife are athletes; in college she rowed crew and he was a nationally ranked tennis player. Their children, who are in boarding school and college, carry on the family tradition. “We are the first mother and daughter to go through the Princeton boathouse,” says the wife. Between practices and other activities, the family’s Maine summers are often condensed into weekends. “We spent more time here when the kids were younger,” the wife continues. “Recently, we’ve discovered the beauty of Prouts Neck in the off-season.”

The couple, who live in Connecticut most of the year, commissioned the late New York–based architect Elliott Rosenblum to design the house. Rosenblum sited the structure to ensure water views from almost every room; he borrowed vocabulary, including the big window bays, from the Queen Anne style of John Calvin Stevens, the prolific Portland architect who designed some of the original houses on Prouts Neck.

While the house was being framed, the family asked Linda Banks of Banks Design Associates in Falmouth to oversee construction and design the interior architecture. She worked closely with builder Larry Wagner of Eider Investments, respecting Rosenblum’s original intent while bringing the 8,000-square-foot house closer to New England understatement. The wife says: “Linda was a huge simplifying force in toning down the high style of the original design.”

Banks sees her work as giving physical expression to the desires of her clients. “My favorite thing is to de-sheetrock a home and give it soul,” she says. “Our strong point is to make the house appear fresh and updated with old details.” Her secret—how she manages the illusion of age and family history in a new construction—lies, indeed, in the details.
Inside, Banks consistently breaks the space into vignettes, leading the eye to intimate arrangements of furniture and decoration, combining antiques, family heirlooms, reproductions, and pieces of her own design. Rosenblum and Banks play a theme and variations. Many of the details refer to ships and sailing—prints of seashells, of a whaling expedition, kitchen drawer pulls in the shape of boat cleats—even though, the wife says, “my husband hates the water.”

The house combines the expansive architecture of the Gilded Age with the precise detailing of an ocean liner. Window lights in the shape of a ship’s wheel embellish the front door; a captain’s shipboard desk, exquisitely compact and painted, stands in the front hall. For the second-floor hallway, Banks designed a hooked rug in shades of gray with motifs of shells, a lighthouse, and the Prouts Neck grasshopper. The pattern mitigates the length of the hall; it’s easy to imagine the next generation of children playing hopscotch on its squares.

Family pieces are everywhere, too; they give the house its heart. “There’s a corner cupboard from my mother-in-law, who was an antique dealer,” says the wife. “It holds my great-grandmother’s collection of Blue Chelsea china. It’s very hard to find, but sometimes I’ll see a piece. We also have a table my grandfather made. He was a woodworker. There’s an old American flag with thirty-six stars in the family room. In Prouts Neck when you buy a house, it comes with all the contents. I have cut-crystal dishes, bone plates, candlesticks—all stored in the corner cupboard. We kept a random kitchen stool, made from wood and rubber; I’ve never seen a better one. And in my son’s bedroom, there’s a mounted fish—his first fish that was a keeper.” An oil painting of a seascape that belonged to the husband’s great-grandfather and left to him by his grandfather hangs in the foyer. A tin storage box-on-stand from Henley recalls the wife’s—and now their daughter’s—brilliant rowing careers.

Small towers, one round and one octagonal, balance the large bays and big rooms. A round table and six butler’s chairs completely fill the octagonal breakfast room—just space enough for family. The light, airy master bathroom above the breakfast room is simply furnished with two sinks and a claw-foot tub. On the top floor, like a lighthouse tower, the husband’s office, paneled in dark wood, commands views of the ocean and the bird sanctuary on the inland side of the house.

Lying on a window seat and looking out through the curved banks of windows, the water seems to be just outside, the house a vessel sailing serenely through the season. Even on a cloudy day, the colors inside seem sun-washed: pastels everywhere, pale blues and greens. In the dining room, a set of custom Windsor chairs is painted with blue-gray milk paint. The dining room tabletop is a single plank of wood that the wife found in an antique shop in Connecticut. Blue granite on the kitchen counters picks up the color of the rock along the coast, and mirrored French doors on kitchen closets reflect watery light. When all the doors in the family room are open, Banks says, “the whole thing is like a giant screen porch.”
“We built this house with the idea that we would never sell it, that we would retire here,” says the wife. They have built a house for our time and for generations to come, a home that holds dreams of summer for all seasons.