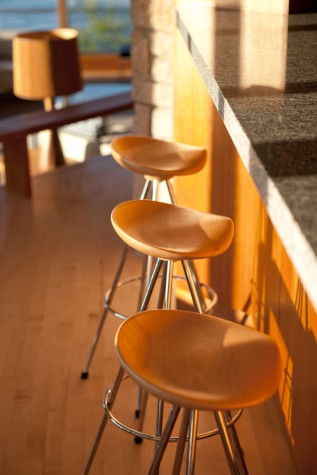 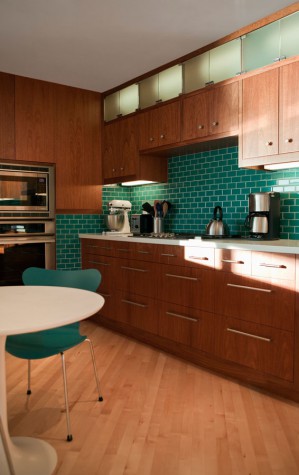 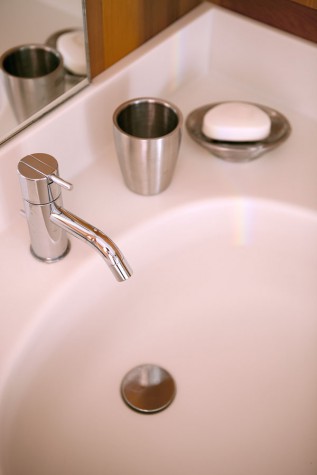 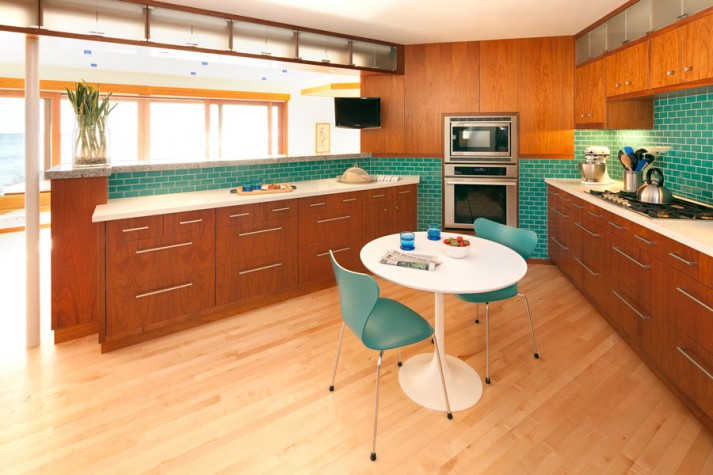 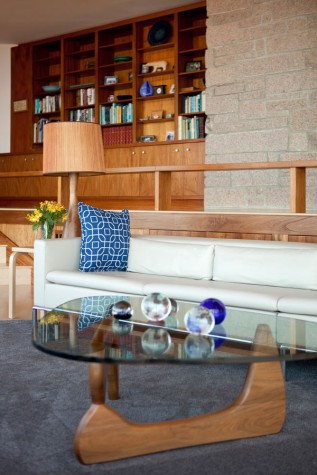 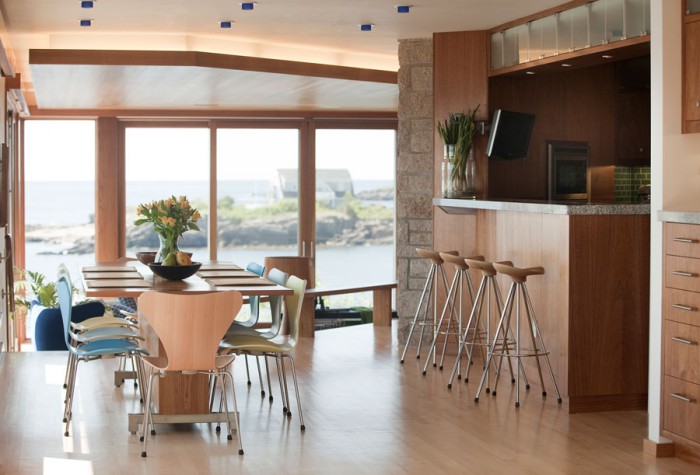 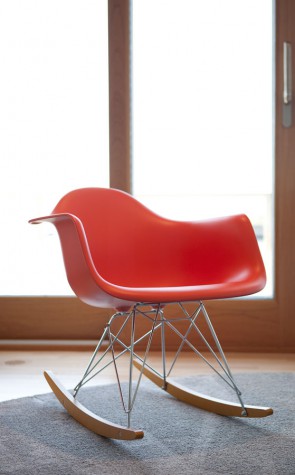 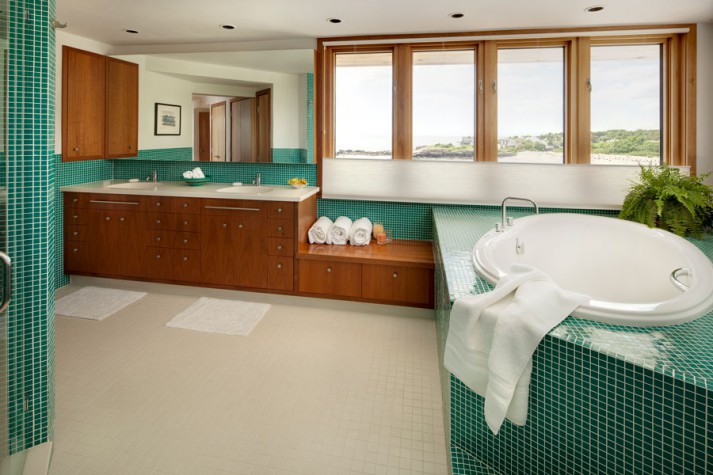 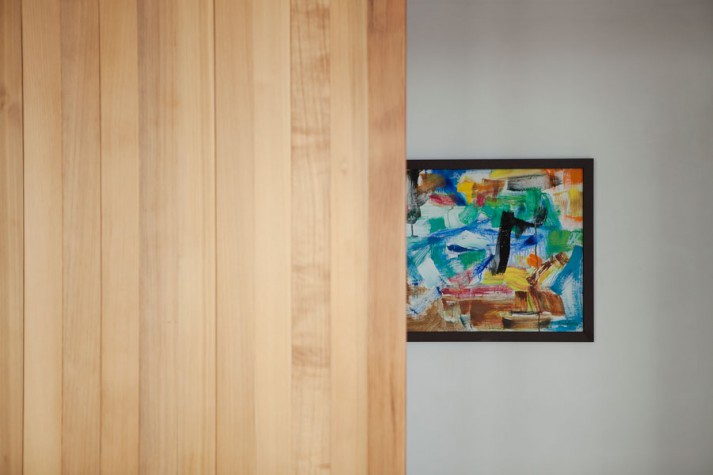 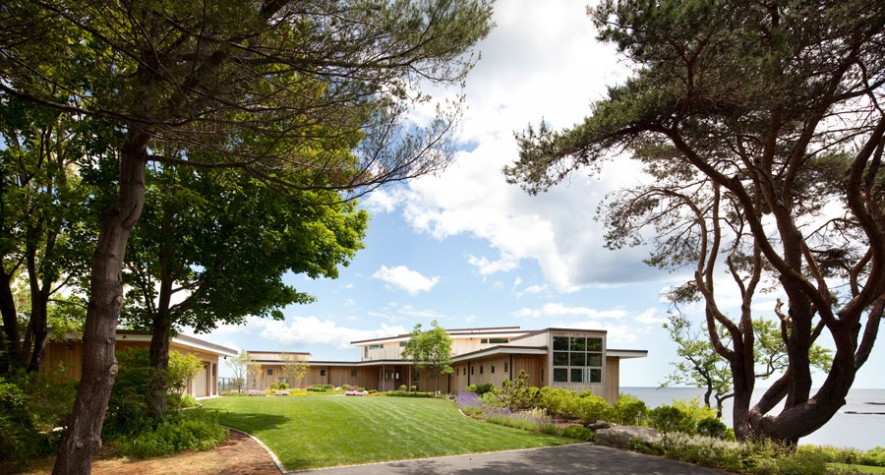 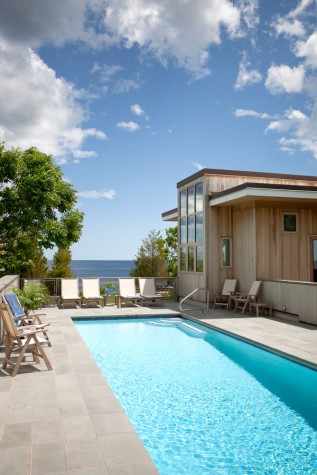 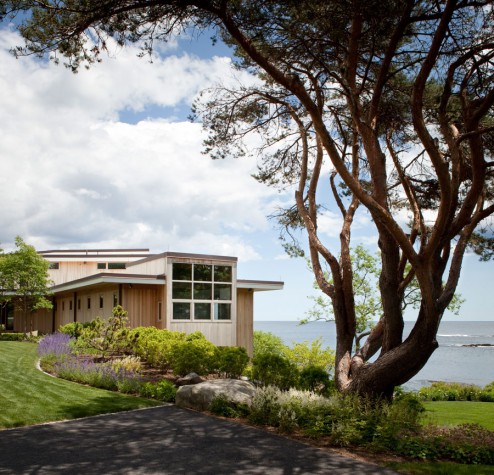 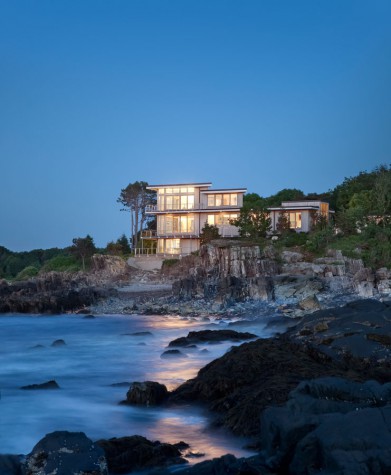 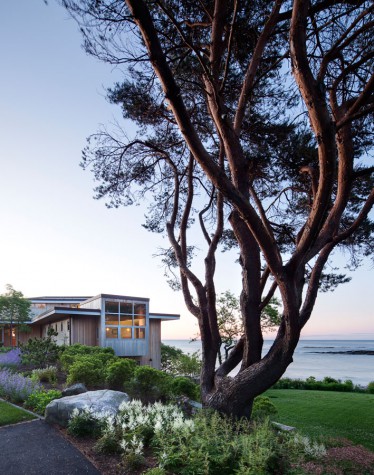 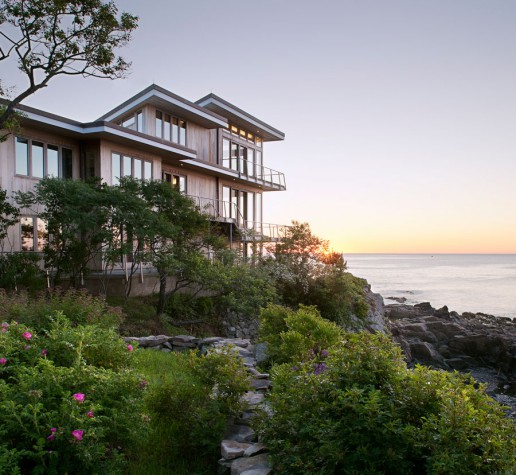 In the early 1960s, long before shoreline zoning laws kept houses from edges of oceans, architect Edwin Koch was designing a modern house on a rocky cliff on the southern coast of Maine. The house was built for a local progressive artist whose sensibilities called for a modern studio space overlooking the ocean. The site couldn’t be beat—unspoiled panoramas of the Atlantic were the perfect backdrop, if not the centerpiece, of the home. Koch had two things architects dream of having: a beautiful natural setting to work with and a homeowner willing to take risks. Innovative for its time, the house featured one of the first residential uses of insulated aluminum windows and a V-shaped floor plan designed to maximize ocean views that, to this day, are beyond compare. The artist called the house Seamark, a perfect name considering that, when it is viewed from afar, the house certainly makes its mark on the sea.

Decades went by. The artist passed away and left the property to her beloved niece. Having greatly admired her aunt’s artistry, the niece loved the house and the memories she had there, but knew it would not accommodate her family of six without major reconfiguration. The new homeowners hired Paul Bonacci and Lucinda Schlaffer of Kittery-based ARQ Architects to design a complete renovation and addition that would honor the modernism of the original design while expanding and updating the home. For the construction and all the cabinetry and millwork, they turned to a general contractor they could trust to execute their vision—Barry and Eric Chase of Chase Construction in North Berwick, whom they had worked with in the past.

As beautiful as the oceanfront site was, it presented some serious challenges. “The site sits high above the road and out on the rocks of the ocean,” says Barry Chase. “Because of its proximity to the ocean, we had to demolish elements of the existing house by hand to preserve the footprint.” The builders also had to use custom scaffolding to access the two sides of the house facing a precipitous drop to the ocean below. On the architectural end, ARQ had to find a way to convert the house (originally designed for two people) into a home for a family of six and their houseguests without expanding the original footprint. In addition, health concerns were paramount—family allergies meant indoor air quality was a priority.

By streamlining the V-shaped floor plan, Bonacci and Schlaffer were able to maintain the house’s orientation toward the water. The resulting effect is that the home feels much like the prow of a ship whose living space extends into the ocean. “By eliminating several somewhat fragmented existing bays, we streamlined the structural form to further acknowledge the home’s relationship with the ocean,” explains Bonacci. This new design was organized around a vertical element—a three-story glass corner that maximizes views to the water—and a horizontal one: stainless-steel cable railings by Cape Cod Fabrications on all floors. To create the space the family needed without increasing the original footprint, ARQ designed a new upper level for a master bedroom wing, which, like the levels below, juts into the sea.

Paying homage to the home’s modernist beginnings, Bonacci and Schlaffer used a restrained palette of materials intended to bring the outside in. They used cedar siding in coved ceilings and walls, and the cable rails from the outside deck are repeated in the main stairway. Maple floors, plaster walls and ceilings, and Spanish cedar trim throughout are accented with glass tiles in the kitchen and bathrooms that reflect the colors of the ocean—elements that serve to “complement the harsh ocean environment,” according to Bonacci.

In an effort to minimize the family’s allergies, all area rugs are made of natural cotton and the plaster walls and ceilings were left their natural off-white (i.e., no paint) and finished with a zero-VOC clear sealer. Even the landscaping was designed to be allergy-free; landscape architect Terrence Parker of Terrafirma Landscape Architecture in New Hampshire avoided the use of allergy-inducing plantings.

ARQ also worked closely with the homeowners to furnish the interiors with custom-designed modern furniture that would work in harmony with some of the original furniture from the house. Chase Construction fabricated all of the cabinetry, along with a number of pieces designed by Bonacci and Schlaffer, including an expandable teak dining table that can accommodate up to sixteen.

In addition to maintaining the aunt’s original artistic vision, the new design is ripe with sustainable elements to boot. Maintaining most of the base structure and framing of the home lessened the amount of new materials required. The existing asphalt drive was replaced with grass paving, which reduced the amount of impervious surface area, eliminating runoff from the driveway and replenishing underground aquifers. “Deep roof and deck overhangs, high-performance glazing for windows and doors, and operable shades provide shading in the summer but allow passive heating in the winter,” says Bonacci. In addition, natural ventilation was emphasized, and a new, white “cool” roof membrane lowers summer cooling costs. The mechanical system features a high-efficiency condensing boiler and radiant heating throughout.

Outside, the landscape design needed to be hardy enough to survive the difficult coastal environment. The pool area designed by ARQ combines with the adjoining garage to create a barrier between the house and the main road. Terrafirma used a wall of white spruce punctuated with green-leaf Japanese maple as a privacy screen, while the terrace is screened by large eastern cedars and black pine, granting the homeowners a sense of privacy the house never had before. According to Parker, the main-entry courtyard presented a challenge as well. “Using a grass paver system, we installed a grid under the grassy drive so the lawn could support cars and allow for water to permeate the soil. The thrust of the planting in this area was mostly to create canopy massing that offsets the building mass.” To do this, Terrafirma lightly clustered a group of three American ash trees together. The careful consideration of the landscaping serves to complement the dramatic natural environment and contributes to the house’s sustainability. Along two sides of the house, cable-railed decks on every level extend out over the rocky shoreline below. It’s easy to imagine salt-sprayed sunrises out there.

If the original homeowner, the forward-thinking artist, could see the house today, she’d no doubt be very pleased. Her modern vision remains intact, and her loved ones take in the same beautiful seascape she looked to for inspiration in her work. Her evocative paintings color the walls in practically every room, a reminder that her spirit lives on. And, in many ways, so does the house she dared to dream up.