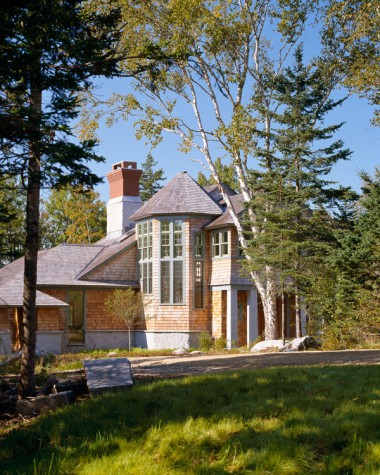 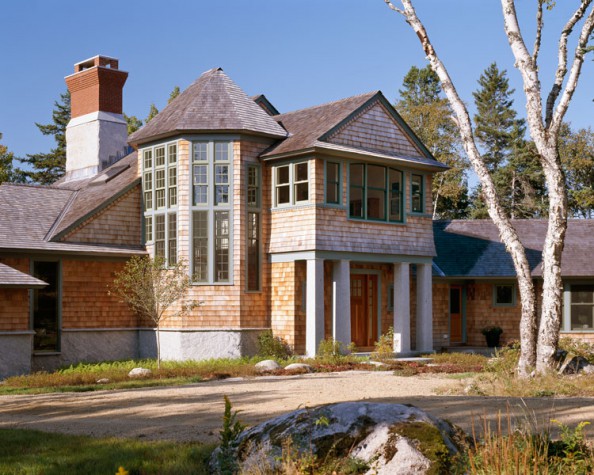 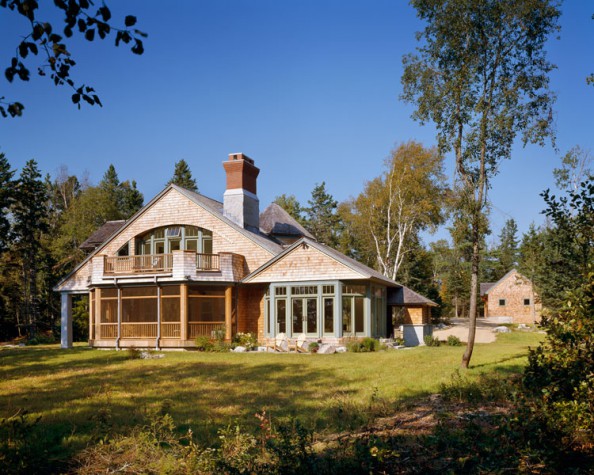 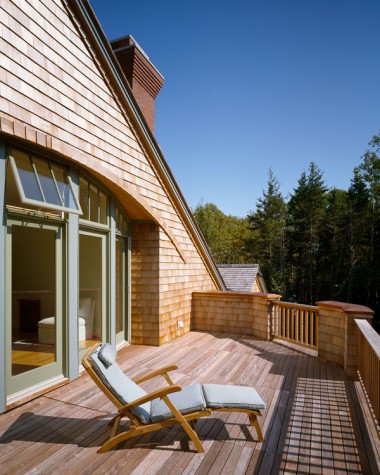 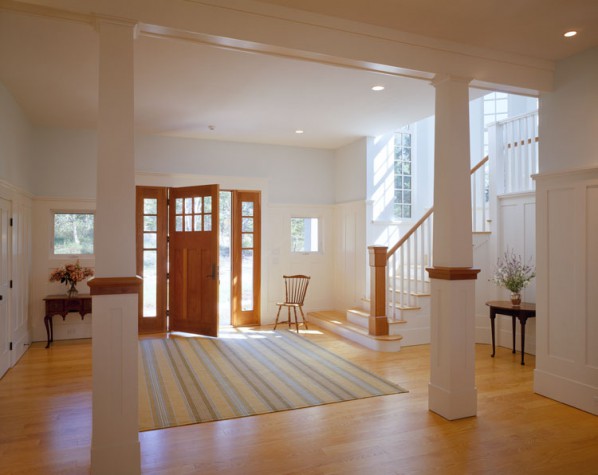 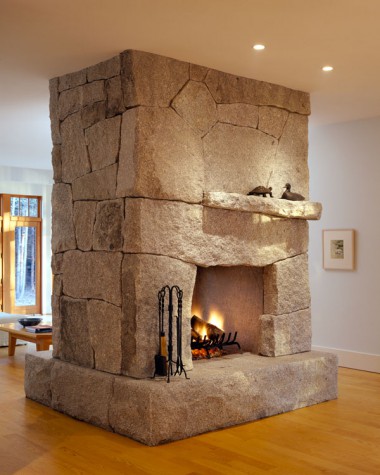 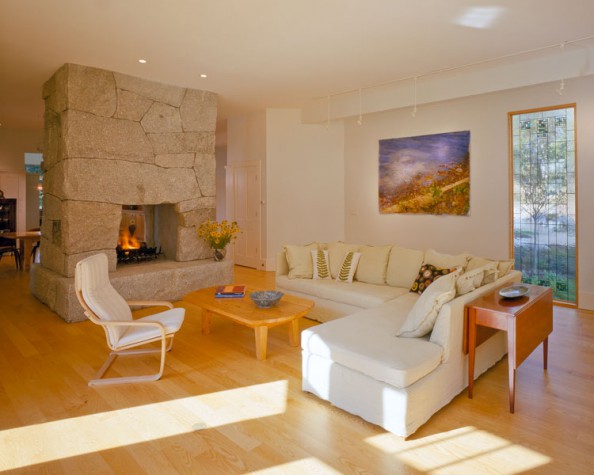 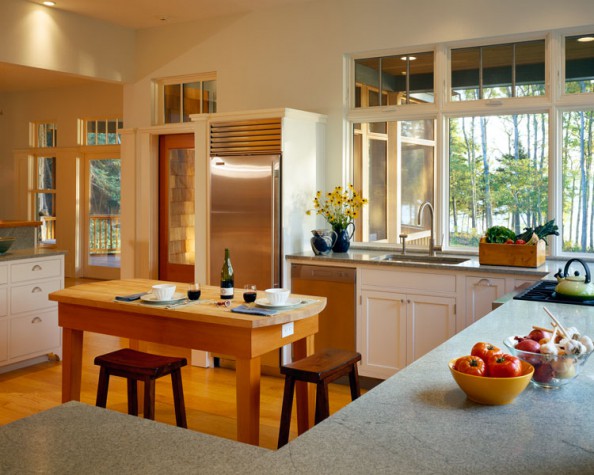 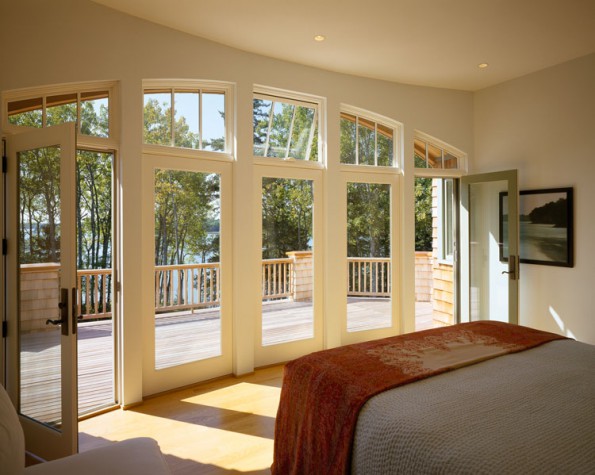 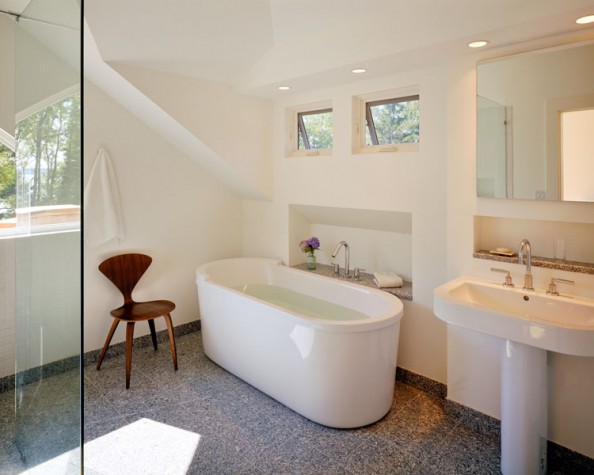 A classic Maine design opens up, inside and out.

At first, they thought of buying an old farmhouse on the water. They had always lived in and loved old houses, and they felt at home in them.
But they looked and looked and could not find one where they wanted to be: on the peninsula that stretches into the tidal flats of Eggemoggin Reach below Blue Hill. Hope returned when they got word of an old farmstead that was selling off a wooded seventeen-acre parcel on the edge of the Benjamin River. If they bought it, they would save the scenic land from near certain development. They had two weeks to decide.

And they did. “We built a big house, but we tried to alter the property as little as possible,” says one of the owners, a painter. Along with her husband, a writer and former tugboat captain, and their teenage daughter, she lives in New York City for most of the year. But when  the family comes home to Maine, they drive up the familiar, unmarked dirt road that wends its way through scrubby cedars and birches until it opens into a bright clearing. There stands a new barn that is half woodworking shop, half painter’s studio. A wooden breezeway with a view, broad enough for a boat trailer, s
eparates the bays.

Past the barn, a gorgeous surprise emerges from the wild: a stunning house with stoic granite columns that offer a nod to symmetry in an asymmetrical setting. The 4,100-square-foot shingle-style house on the tip of Means Point is a modern space. Yet its marriage of stone and cedar, already blending to an even gray after just two years, makes it look like it belongs. Now, its owners feel the same way.

“It was a funny evolution,” the wife said. “We started looking at books and were intrigued by really modern-looking houses—a streamlined box with a green roof, maybe. But in the end, we couldn’t really stray that far from our roots. We love antiques and we’re both history buffs. It was just fortuitous meeting Eric, who has a nineteenth-century sensibility with a modern, clean approach.”

Eric Chase, of Eric A. Chase Architects in nearby South Brooksville, combined old and new with ease. “There’s spareness in the lines and shapes of the house,” Chase explains. “But the materials are all kind of traditional.” Painted paneling in the dining room and large but simple baseboard moldings lend a sense of heft to the interior design. Yet the windows—including those that greet the gracious farmhouse kitchen’s granite counters exactly—have no moldings at all.

Throughout the house, hand-hewn details abound. The husband built the dining room table from thick slabs of reclaimed maple.
The floors throughout the house are ash—light in color but lively in grain. And the kitchen hutch is hand-built from a combination of white fir and fir plywood. Everywhere you look, the wife’s landscape paintings hang from walls like windows to the scenery on the other side.

The owners use the house all summer, during holidays, and on long weekends in the spring and fall. But that will change this year, when their daughter begins college. “The plan is to drop her off at school and keep on driving to Maine,” she says. By then, they will live there for at least half the year.

“This house is very personal,” Chase said. “They didn’t do anything for show. They wanted to build a house to complement their lives.” That goal is especially evident on the second floor, where sunlight follows the staircase as it curves up to a comfortable media room. Beyond are the family’s two bedrooms—just enough and nothing more. The master bedroom opens onto a porch that is big enough to accommodate sleeping under the stars (it is one of three that add up to another 725 square feet of outdoor living space). Their daughter’s bedroom, ringed with windows and views of pine and sky, feels more like a tree house. Simple, day-lit dressing rooms with built-in birch hutches store fleeces and Crocs. In one, a clever design offers a simple solution: a narrow mirrored door hinges back and out of the way when it is not being used.

Some of the project’s most pleasant surprises came from working through kinks along the way. Chase originally designed a guest cottage off the kitchen to give visitors private quarters that were still close to the home’s public spaces. But the outbuilding started to feel a little impractical, in part because it would have required its own heating and septic system. So they thought again—and decided on a hefty pocket door to separate the guest wing. When it’s just the three of them, they close it and don’t bother heating the extra space. “It’s also a nod to our senior years, and a co
mfort to know it’s there,” the wife says. “The bathroom is wheelchair accessible, and there are no steps up or down to get in the way.”

The owners did not get in the way of others, either, but let the professionals they worked with do what they do best. The couple envisioned a concrete sink in the powder room, recalls builder Mike Allen of Brooklin, so he drew up and fashioned a streamlined slab that they simply love. The wife asked a stained-glass artist to create a design she thought would work as the living room’s prominent vertical