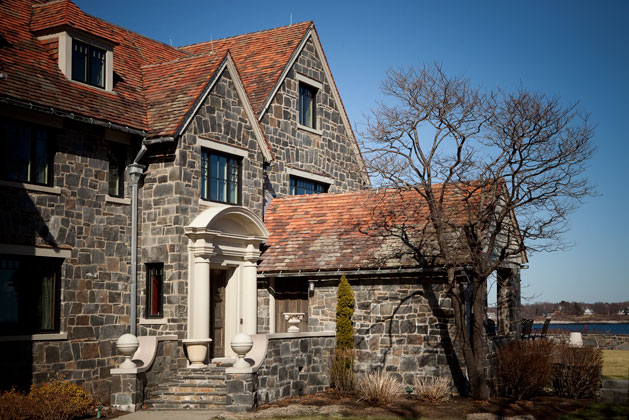 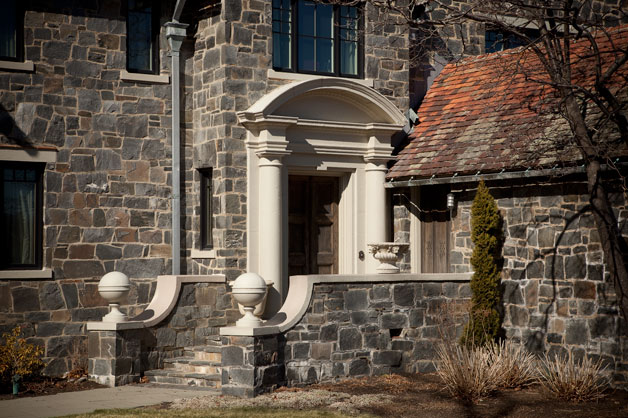 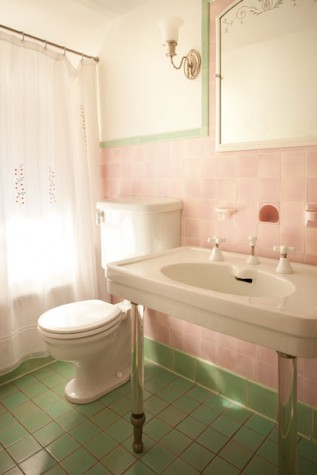 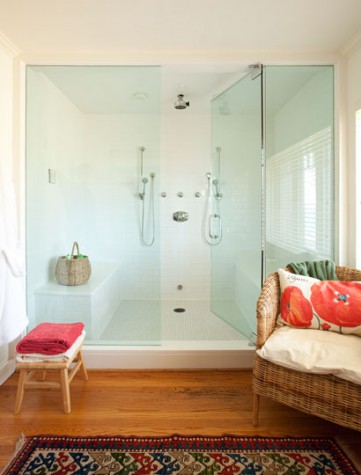 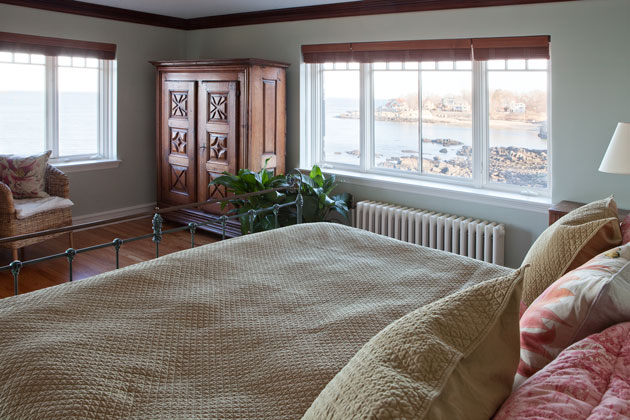 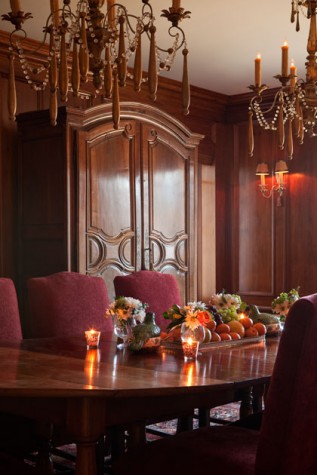 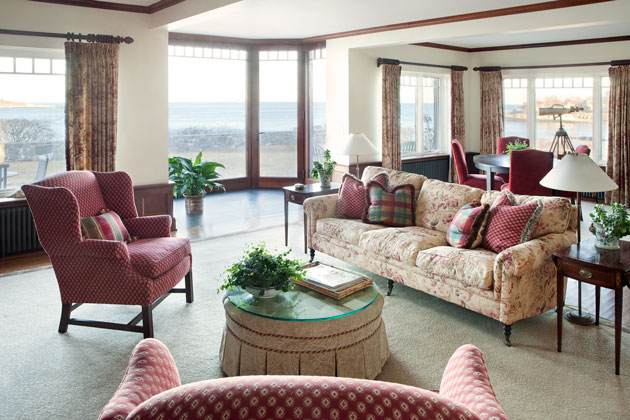 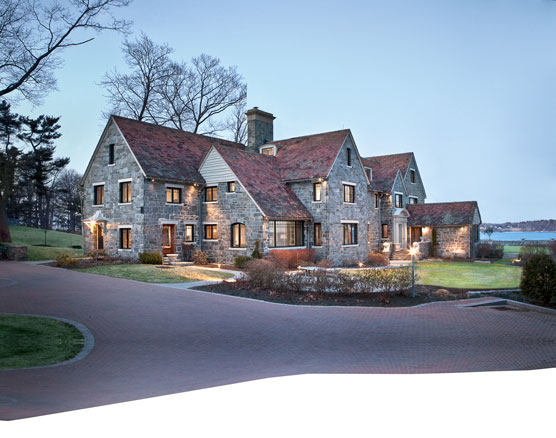 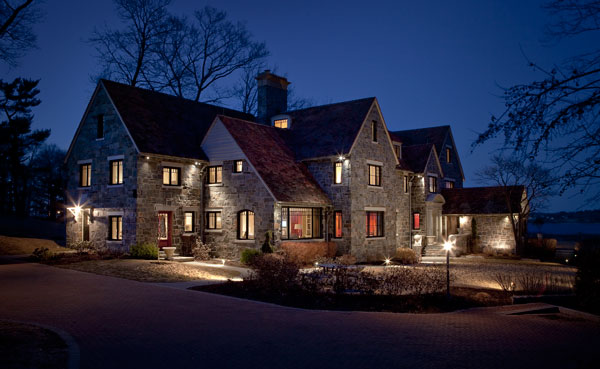 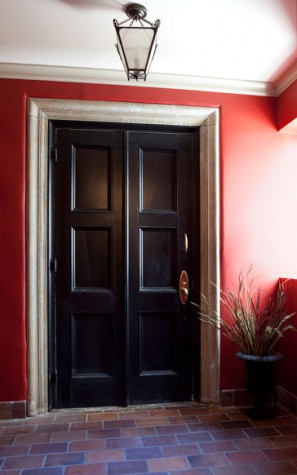 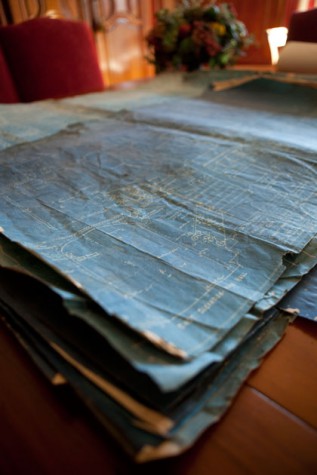 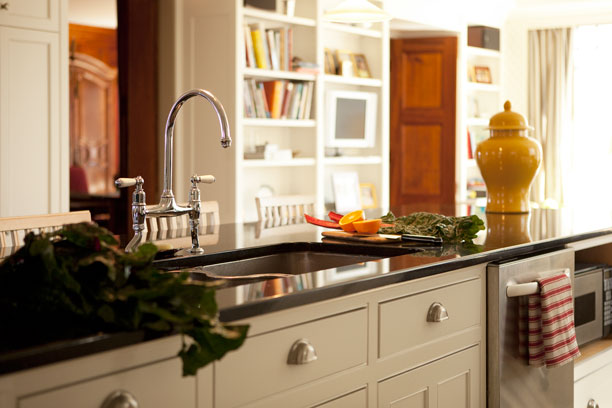 
The transformation of an English manor house in Cape Elizabeth

Stone Gables is the name of an English Tudor–style home perched on a granite ledge in Cape Elizabeth. As perhaps befits a windswept, ocean-side property with such a name, the house has a bit of the feel of the manor and comes complete with, if not a sweeping saga, an interesting history.

Gannett’s granddaughter, Maddy Corson, describes the home as being “of another era,” and not just because of when it was constructed. Stone Gables was clearly built for an Upstairs, Downstairs world, one in which prosperous families could be expected to have live-in help. The rooms intended for the Gannett family included a large space for entertaining, multiple bedrooms, and a wood-paneled library. Leaded-glass windows offered impressive views of Portland’s shipping channel. A bell under the dining room table summoned the help. An upstairs closet was devoted entirely to Maddy’s grandmother’s fur coats.

In the back of the house, away from the views, were the servants’ quarters with smaller windows and lower ceilings. The kitchen consisted of five small rooms. Downstairs, there was a canning room and staff bathroom. Upstairs were the staff bedrooms and a hall leading to a linen room, which was visited weekly by a seamstress. Outside, there was a carriage house: cars were parked below and the chauffeur lived in the apartment above.

The Gannett family owned their home through the early 1950s. It changed hands in the subsequent decades and changed names as well. Maddy Corson’s stepmother, who once lived in the carriage house, remembers the property only as Grey Rocks.

In the early 1980s, Jesus Guevara, a prominent surgeon from Mexico City, bought the main house. By then the property had been subdivided, and Harold Pachios, senior partner at Preti Flaherty Beliveau & Pachios, lived in what had once been the carriage house. Apparently, Guevara’s wife, Joan, had seen Stone Gables listed in the New York Times Magazine and persuaded her husband to purchase it. She had always wanted to live in an English manor house. Though the couple occupied the home for a few years, Pachios says that Guevara “couldn’t stand the house or Maine.” Soon he was visiting only intermittently, and eventually he convinced Joan to move to Dallas, where he had bought a new home. After a while, the Guevaras neither visited nor sold their Maine property, and it remained largely empty for over a decade. The grass grew waist high, a squatter pitched a tent on the lawn, and the place fell into disrepair. Finally, the Guevaras put the home on the market. At the end of the listing period, when Joan was ill with cancer, they decided to take the place off the market and enjoy the home one last time. Only she died before they could return.

This is when Chris Lynch and his family came into the picture. Lynch is the current owner and president of Legacy Properties Sotheby’s International Realty, but in 2001 he was in transition. After seventeen years on Wall Street, he had decided it was time to move on. His hours were too long. He was traveling too much. He didn’t have enough time with his family. So he left his firm and spent a year considering where he wanted to go next. Where would be best for his wife and children? Australia? New Zealand? His wife’s hometown of Philadelphia? All these places were possibilities. Though he had gone to Bates College, Maine wasn’t a spot he was considering until he attended a friend’s wedding. While here, he decided to look at properties. He was thinking of an investment more than a residence, but he was completely taken by the views from Stone Gables. He made an offer, but the deal didn’t go through. A week later, as Lynch says, “September 11 happened and Guevara was motivated to sell.”

What is perhaps surprising about Lynch’s purchase is that, at first, he found the house to be creepy and even “a little scary,” he says. One foggy night—when he was in the empty house before his family had arrived—he phoned his wife in New Canaan and said he was going to try to open the secret door in the library’s bookcase. He had heard about the door from Guevara, but Guevara had never been able to open it himself. As far as Lynch knew, the bookcase had been sealed for twenty years, perhaps longer. Lynch started to unload the heavy sets of encyclopedias on the shelves, and when his back was turned, the door opened on its own. Behind the bookcase, Lynch found a small closet with shelves, on which sat the original blueprints for the house.

The lugubrious feel of the place might have been from its medieval outfittings—the thick wooden doors with brass studs and handles—or perhaps the lawn lamps with their giant gargoyles, which Lynch subsequently had removed. But Lynch saw the possibilities and found plenty to love. The location was a big part of it, of course, but there was also the sturdy construction, abundant rooms, and original detailing, including wood paneling, crown molding, wall sconces, porcelain bathroom fixtures, two original wall paintings—one on the library wall, another in the dining room—and tile flooring. At the same time, Lynch was hearing good things about the Cape Elizabeth community, and he thought it was a place he would like to live.

Still, there was considerable work to be done. While Lynch liked to entertain, and would subsequently come to host several charitable and political events at his home—including a lunch for Dick Cheney and fundraisers for Susan Collins and the Center for Grieving Children—he had practical concerns. The electrical system needed to be redone, as did the plumbing, heating, and lighting. All the windows—more than a hundred of them—had to be replaced. What’s more, Lynch wasn’t planning on hiring live-in staff. He wanted his house to be a family house.
To update the home, architects Rob Whitten, of Whitten Architects, and Will Winkelman, formerly of Whitten Architects and now of Winkelman Architecture, collapsed the kitchen’s many dark, closetlike rooms into one open kitchen. The upstairs servants’ quarters were converted into a guest suite for visitors. The old sewing room became a steam room. The formal rooms remained largely the same, but a glass bay was added to give the feel of a ground-floor conservatory and to provide a balcony for the master bedroom. Meanwhile interior designer Christine Maclin of Maclin Design in Portland worked to make the home “family friendly,” aiming for something informal yet traditional. “The presentation,” she says, “needed to live up to the house.”

As for the area surrounding the home, Lynch says, “We made virtually all the property useable and kid friendly.” John Mitchell of Mitchell & Associates Landscape Architects in Portland converted what had once been asphalt into a circle-shaped lawn with a backdrop of Rosa rugosa. An existing attached garage was demolished, and reddish concrete pavers were placed in front of a new three-car garage. The woods on the west side of the house were largely razed and replaced by a lawn with a swing set. A granite retaining wall now defines the property, and there are patio areas, one of which encloses a hot tub. A steel staircase leads down to the rocky beach off where the Lynch children swim and crab and collect starfish.

Not that the outdoors is the only attraction for the younger set. In years past, Maddy Corson used to ride her bike and roller skate in the home’s large basement. In the more recent past, Lynch’s son took his friends on a forty-five-minute tour of the secret passageways. One day a friend descended from the attic and enthused to his mother, “We found a room he didn’t even know was there!” Just a few months ago, Lynch’s 8-year-old daughter decided the first thing a visitor needed to see was the basement. After all, it has a staircase that goes up to the woodbin hidden behind the living room wall. Such features might once have seemed spooky, but now they seem playful, which is part of the appeal of the present, family-friendly incarnation of Stone Gables.