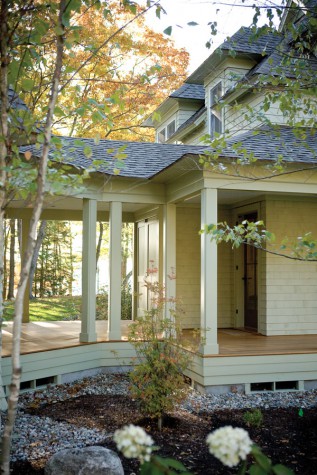 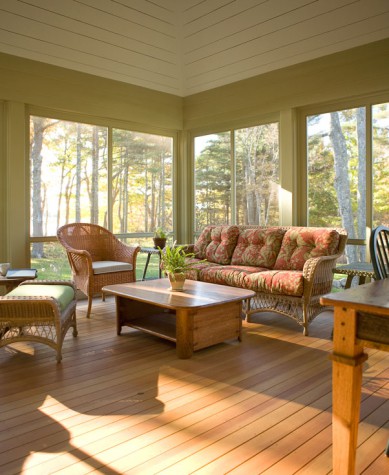 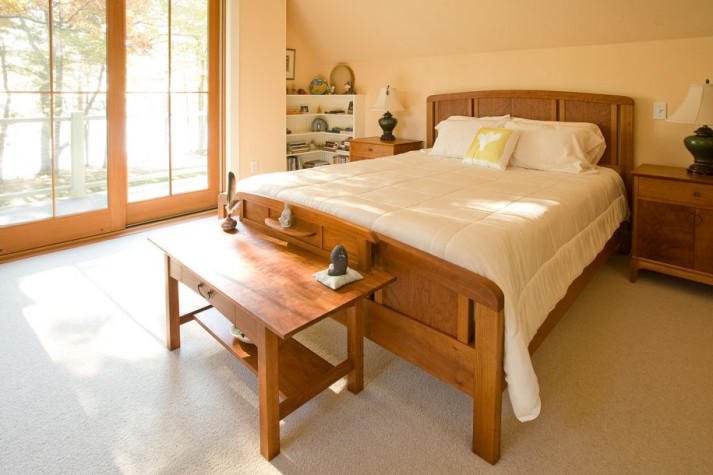 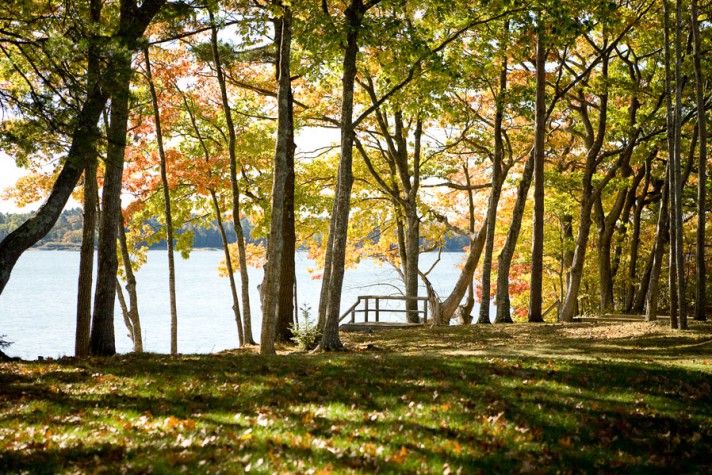 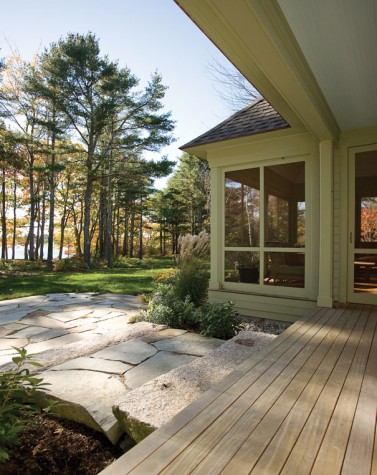 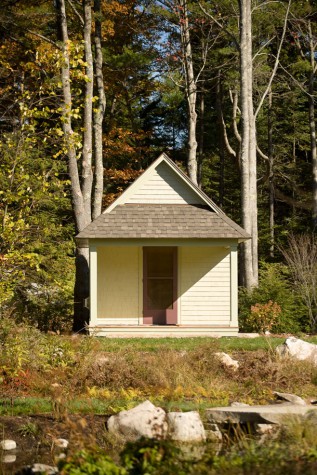 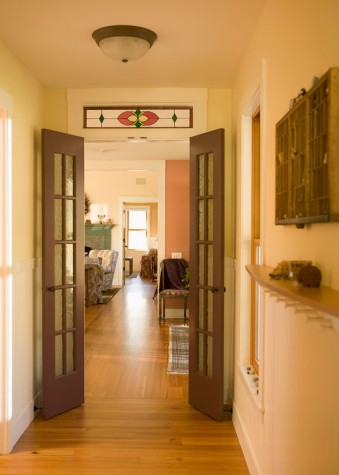 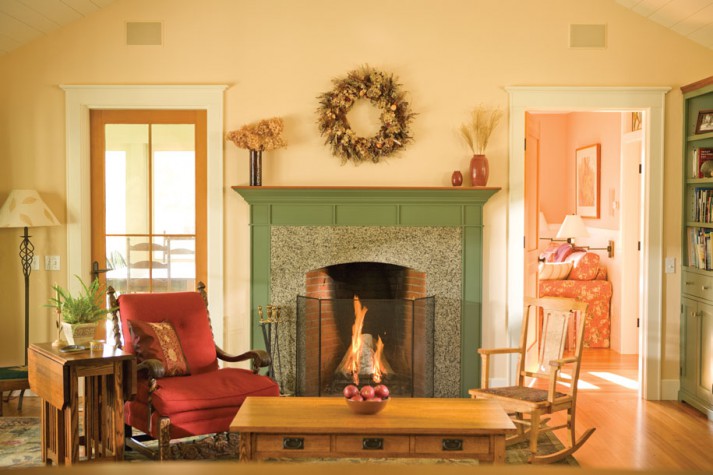 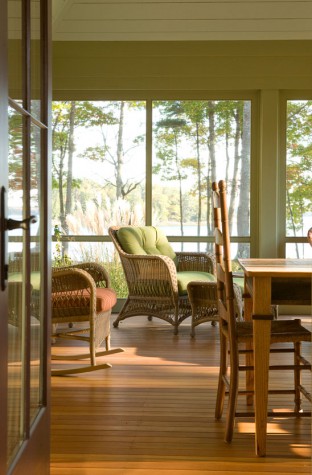 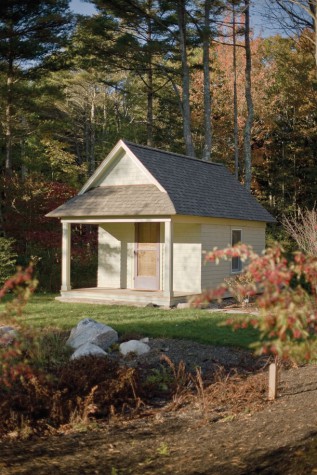 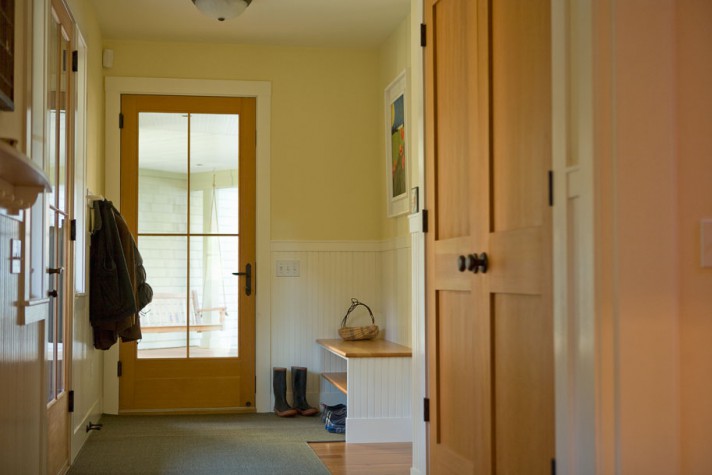 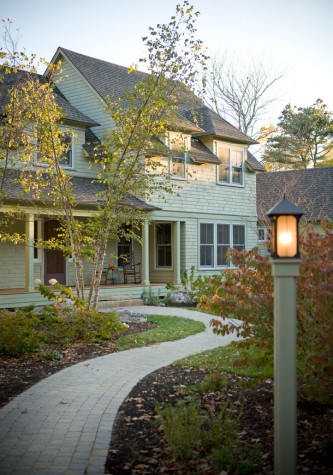 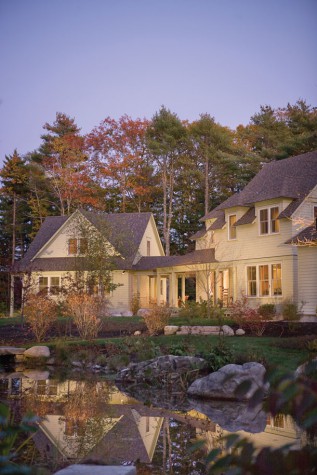 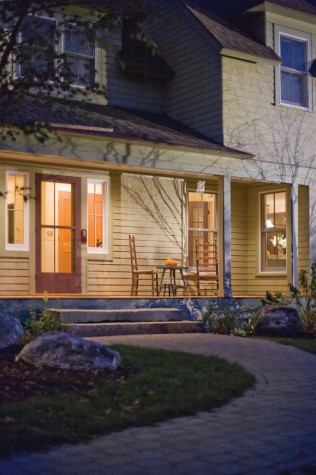 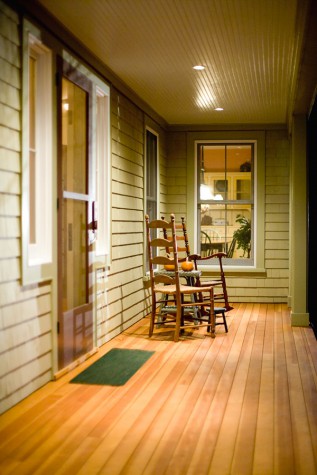 A year-round home designed with old summer cottages in mind

The story of the home at Mere Point begins like this: Some years ago, a homeowner built a garage with a second-floor apartment on a particularly nice piece of property, filled with meadows and forest, with commanding views of the still waters of Mere Point Bay, just west of the Harpswells.

A subsequent homeowner renovated the apartment and added on to the garage. The home was sold once again, this time to a couple from Maui. But there were a few problems. The home didn’t take advantage of the ocean view. The property’s soil was clayey, and the garage had been built without a vapor barrier, so drainage was poor. There was mold. There was mildew. There was a sump pump that operated around the clock, save when it didn’t operate and the basement flooded. Enter Joe Tara of Jozef Tara Design in West Bath. He was a friend of Sharon Whitney, the Maui couple’s gardener, and Sharon thought he might be able to help.

Rather than renovate, Tara and the homeowners decided to rebuild. Relocating the home would provide better views of the bay with its shore birds and occasional raccoon digging for clams in the mudflats. The new home would not only allow the homeowners to improve on what they had, but to daydream about what they really wanted. Beyond their initial desire for something “cottagey,” they had some specific needs: for a home office, a workspace-studio, and ample storage. They also had a fondness for older homes. “They wanted,” says Tara, “a bit of a feeling that the house wasn’t all built at one time. They wanted to get away from it looking like one big box. When those shore cottages were built, you’d go to the local lumberyard and buy what windows were there. When you did an addition, you’d go back to the lumberyard. Now there were all these different windows for sale, so you’d get those windows.” The goal for the house, then, was to achieve something that was “fractured” without being “too contrived or cutesy.”

Tara’s design resulted in a house that feels like a series of discrete spaces, each defined by function, character, and what Joe calls “quirks and unexpected elements.” One of those unexpected elements is simply the home’s many distinct parts. The central section of the house consists of a combination living room, dining room, and kitchen from which spring a sitting area, guest room, and art studio/office space. The second floor features a bedroom, office, and meditation room. On the outside, there are three porches and a breezeway that leads to a carriage house with a downstairs garage and an upstairs room that is currently used for drumming sessions. The property is similarly divided, with a meadow, vegetable garden, cultivated blueberry patch, and small pond ornamented with boulders, vegetation, and a stone bridge. Multiple planting beds surround the house and interrupt what little there is of a lawn. Toward the water, a stairway descends to a boat launch and an area for holding picnics and building campfires.

All these unique features and environments reflect Tara’s notions about “breaking down spaces.” The breaks aren’t so significant, however, that rooms (indoor or out) don’t feel fragmented. Certain design elements and materials repeat throughout the house. For instance, plaster on the walls, wainscoting in many rooms, antique red pine for the floors, and stained glass (made by one of the homeowners) for the transoms over three of the interior doors. The shape of a sprung-arch window is mirrored in the curve of a balcony and fireplace. The wood ceilings of a guest house and a screened-in porch are painted, the latter a sky blue that is a lighter version of the shade customary to some old porches. (“The theory,” Tara says of why the color was so often used, “is that it resembles the sky. Another theory is that spiders don’t like blue.”) And, perhaps most notably, the house is full of built-in wood cabinetry and shelving.

Lynette Breton, a studio furniture maker from Harpswell, designed a number of pieces for the homeowners even before they rebuilt their home, including a cherrywood and red-oak bed frame. Once Tara was on board, the homeowners asked Breton to work with him on all of the interior architectural cabinetry. Because everything in the house was going to be custom made, however, she couldn’t execute all the projects herself, so Breton brought on four other woodworkers to help her, making the house something of a showplace for contemporary Maine woodworking.

The decision worked well with Tara’s overall vision, as each woodworker, in collaboration with the builders—Leon Vaillancourt of Vaillancourt Builders in Bath and Blake Eaton of Blake A. Eaton Carpenter in Blue Hill—brought his distinctive “signature” to the project. Charles Durfee of Charles Durfee Cabinetmaker in Woolwich worked on the kitchen, a mix of paint and natural cherrywood designed to evoke a 1920s-era kitchen. The result is full of ingenious storage and includes an intricate pantry closet with swinging shelves that fold back to open onto even more shelf space. David Stenstrom of Portland’s Last Chance Woodworking was given the challenge of building an unusual cabinet to hide a home theater system. Because television is a minor part of the homeowners’ lives, and because they didn’t want to block one of their sitting room’s many windows, their flat-screen television is housed in a low cherrywood cabinet. With a push of a button, the television rises up and out of the cabinet for viewing. Stenstrom also worked on two doors off the home’s breezeway that open, pivot, and slide neatly away to reveal a sauna. Eric Koehler of Brunswick’s Koehler Woodworks handled a number of upstairs projects, including a bathroom chimney cabinet and a walk-in closet’s large built-in dresser with custom antique red-pine knobs and top. Lewiston’s McIntosh & Tuttle Cabinetmakers worked on the cabinetry that surrounds the living room piano while also hiding the room’s sound system.

Breton didn’t farm out all her designs, however. She created an office of cherrywood for one of the homeowners, who works in finance. This upstairs space consists of an L-shaped desk with simple lines and a curved corner console that hides the computer’s electronics. One wall has a built-in storage area for archived files and a fax machine, while another has a second desk that serves as a project table. Downstairs, in a more public space located just off a short hall leading to the front door, is an art studio and office for the artist-homeowner, who works in watercolors, beads, polymer clay, and stained glass, among other media. While the barrel-vault ceiling and large sprung-arch window in the upstairs office works well with the darker cherrywood and standard business accoutrements, the studio’s built-ins, largely built by McIntosh & Tuttle Cabinetmakers, have a lighter feel that is well suited to the bay window and painted wood ceiling that Tara designed. The center of the room has a stand-up worktable with drawers that hold sheets of art paper, and there are small built-in shelves to display works in progress. A handmade flower press sits atop a cabinet specifically designed for an extensive bead collection. (These two items are courtesy of Breton.) In the art studio and elsewhere, there are shelves and ledges to put objects on. As one of the homeowners says of the arrangements of treasured items that dot the house, there are “little altars everywhere.”