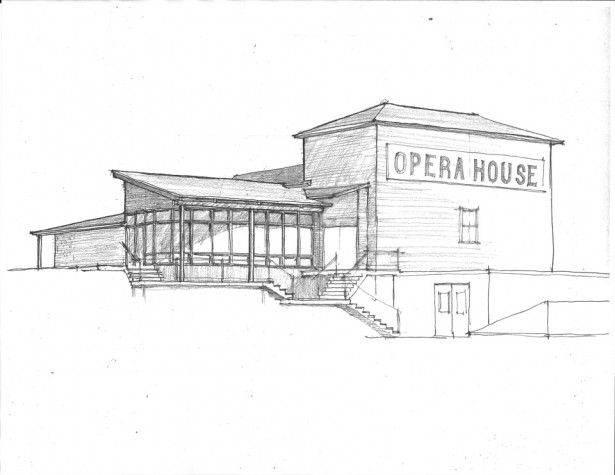 The Opera House sits on a small, rocky, steeply sloping site overlooking Stonington harbor, with a flytower that has been a dramatic presence in town since 1912. When Opera House Arts (OHA) bought the Opera House in 1999 it had been vacant for seven years. OHA resurrected it as a popular and active center for plays, musicals, movies, and community activities. While the owners have steadily made improvements and added new equipment, they have made do with a cramped lobby, no scenery shop, and inadequate restrooms and dressing rooms.
During the past 10 years, Eric A. Chase Architecture has worked with them through many incarnations of their expansion plans. Community members made it clear during a weekend planning session that they wanted the Opera House tower and sign to remain prominent. Their second priority was a spacious lobby with adequate facilities for a full house of 290 patrons. Both the community and the owners wanted the addition to blend with Stonington’s architecture, and the owners also hoped for a dramatic statement.
Once OHA purchased an adjacent building to use for offices, the program was scaled down and the final plans took shape. The scenery shop will be tucked into what is now a two-car parking lot between the tower and the small office building. The shop will mostly be hidden behind the offices, and the roof will remain below the distinctive Opera House tower. The new lobby on the west side of the existing hall will be at the face of the granite ledge at top of a public walkway from Main Street. A south-facing curved glass wall will give a dramatic view of the harbor. The lobby roof is low enough not to obstruct the view of the harbor from the houses up the hill, while its long overhang will shield the glass from the summer sun, and added thermal mass in the floor will take advantage of the low winter sun. The expanded facilities will allow the Opera House to thrive as a creative force in Stonington.