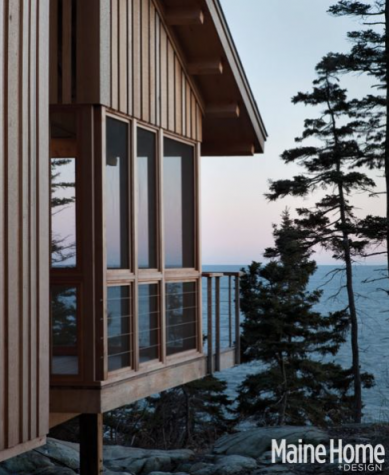 Q+A with Thornton Lothrop about his retreat in Roque Bluffs

When Thornton Lothrop collaborated with Whitten Architects, Nate Holyoke Builders, and structural engineer Albert Putnam to build a getaway at the “edge of the earth” near Machias, the goal was to let the surrounding ocean, trees, and rocky ledge define it. The resulting Norwegian-inspired timber-frame design “pays homage to the phenomena of the Maine experience: nature, rugged coastline, shelter, retreat, and vacationland,” Lothrop says, and has passive solar features that underscore independence and efficiency.

Q. WHAT HAVE YOU ENJOYED MOST ABOUT THE HOME?

A. There’s a sense of the house as a living system. Each day and season brings different sounds. During Hurricane Arthur, the house was buffeted by winds but maintained solid resiliency—similar to an old-growth tree. The character of the outdoors can be modulated depending on where one is in the house, with windows open or closed. Waves pounding the rock coastline are ever-present and can be felt during storms through the ledge on which the house sits, while the igneous and glacial- worn nature of the bedrock imbues a sense of permanence.

Q: WHAT ARE THE ANNUAL ENERGY BILLS?    A: For three/four months of inhabitation during different seasons the average is $1,000 for propane and wood, plus about $400 for electricity. Although the structure is tight, the large expanse of glass surfaces and visual connection to the outside reduces insulation, but it’s a worthwhile trade for the immediacy of the outdoor experience.

Q:WHAT’S NEXT?   A:Future updates include a separate garage and studio/living space for creative endeavors.