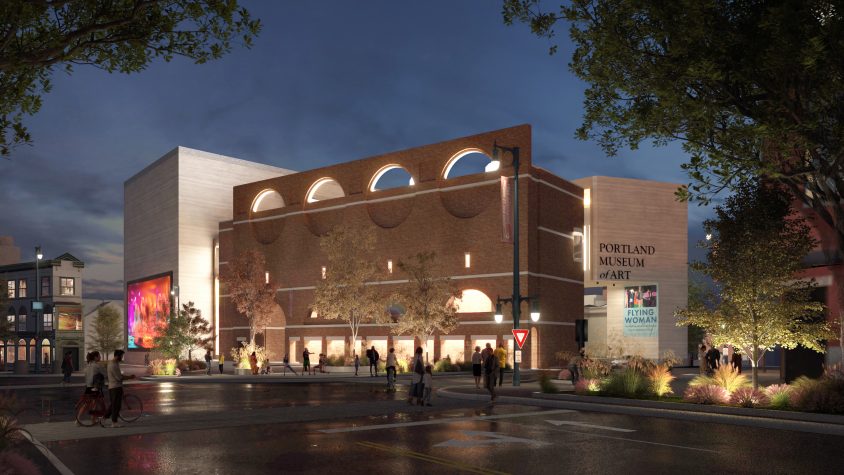 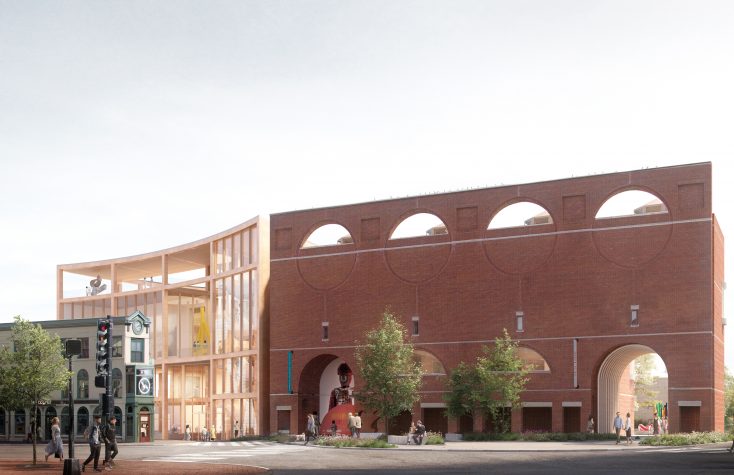 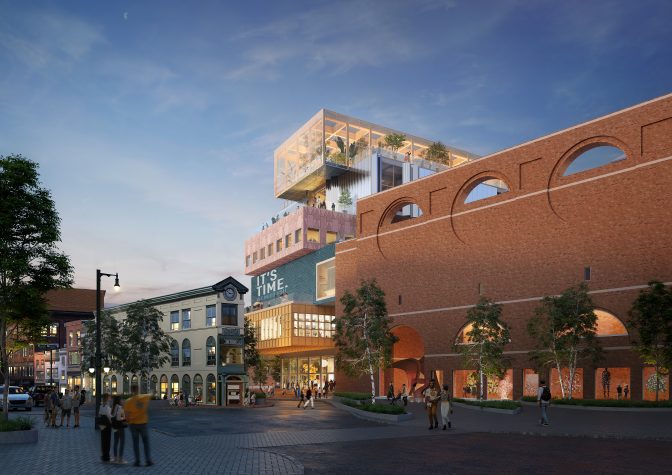 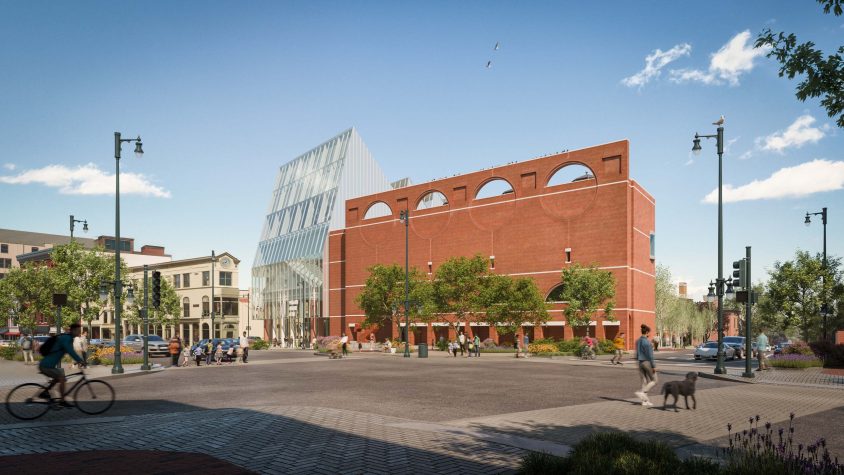 Nearly one year after putting out an international call for designs to imagine the newest building on its Portland campus, the Portland Museum of Art (PMA) is preparing to pick a winning architectural team in January 2023. From the initial 104 entries that the museum received, submitted by architectural teams from 20 different countries, four finalists were chosen: Adjaye Associates, LEVER Architecture, MVRDV, and Toshiko Mori Architect, all of whom presented design concepts that aligned with the PMA’s goal—per the values laid out in the PMA Blueprint—of creating a space that promotes change, equity, and belonging.

“All four of the finalist teams are incredibly diverse and inclusive,” says Mark Bessire, the Judy and Leonard Lauder Director of the Portland Museum of Art (and the only member of the PMA administration to sit on the finalist jury panel), noting that there are women and people of color among the team leaders—still something of a rarity in the architectural field. “Each firm provided a specific vision that would reflect how sustainable architecture can promote equity, and how a building can make programming visible.”

Working with Portland firm Simons Architects as the architect of record for each design concept, the four finalists were tasked with creating a structure that would add 60,000 square feet to the museum’s existing 40,000-square-foot campus. The finished program for each concept needed to address numerous elements, including a community gathering space, a rooftop sculpture garden, workshops, classrooms, a rooftop restaurant, and more. In addition, Adjaye Associates worked with local firm Michael Boucher Landscape Architecture to address how the design would interact with and enhance the landscaping of the campus.

Another element that set the finalist teams apart was addressing ways to attract guests who typically would not visit museums like the PMA. “An overarching factor that went into undertaking this project is thinking about the folks who don’t currently go to museums; how to build a place that is more equitable for them that they would want to belong to,” says Bessire. “All four teams have done a great job presenting different ways we could achieve that.”

The last time a museum opened up an international competition of this caliber was in 2009, when Sir David Adjaye and his associates were chosen to design the National Museum of African American History and Culture in Washington D.C. In opening up the PMA to the world, the hope was to encourage designs outside of the cookie cutter blueprint typically used for museums, in addition to creating a structure that would enhance the PMA’s existing buildings. The last building to be erected on the PMA campus was the Charles Shipman Payson Building in 1983, a project led by architect Henry Cobb representing the architectural firm led by I.M. Pei. “Cobb, who sadly died last year, always told us, ‘When you finally do the building next door, make sure it’s as good as all of the other buildings,’” says Bessire. “By that he was referring to the building that he designed, as well as the Lorenzo Dole Memorial Gallery, which is a classic building from 1910, and the 1801 home in Portland. My gut tells me that any design that’s as good as those will create a new icon for Portland and for Maine. But, it also has to work with the whole campus in moving forward.”

In mid-November, representatives from the four finalist teams gathered in Portland to present their concepts to the public, with videos and lectures explaining the designs and the inspiration behind each. Founder and principal Sir David Adjaye spoke for Adjaye Associates, presenting a design that both acknowledged the unceded native land on which the building will sit, and incorporated elements from Maine’s natural resources like rammed earth and timber beams, creating a structure meant to celebrate the life cycles of the state’s landscape. LEVER Architecture’s concept, presented by the principal in charge, Chandra Wilson, traced a similar line, incorporating a curved roof design that will allow the building to catch as much natural light as possible, in homage to the Wabanaki concept of embracing the light.

Fokke Moerel, a partner at MVRDV, presented the firm’s design titled “The Beacon” which resembles a stack of books—complete with numerous cantilevered elements, public gathering space on each of its six levels, and an easily accessible public route throughout, meant to encourage the public to enter and engage from numerous points. Toshiko Mori, who also designed the building for the Center for Maine Contemporary Art (CMCA) in Rockland, presented the concept developed by her eponymous architecture firm. Featuring a glass exterior and staggered rooflines that filter light throughout the interior, the proposed design is filled with numerous public meeting spaces and quiet corners for museum patrons to use. “It was one of the highlights of my museum career, to have these four superstars in the design and architecture world—Fokke Moerel, Sir David Adjaye, Toshiko Mori, and Chandra Robinson—in Portland, talking to us about the future of museums. It was extraordinary.” says Bessire.

Following the presentations, models of each of the design concepts were placed for public viewing in the main atrium of the museum. Initially scheduled to be removed on December 9, the PMA opted to extend the viewing period until December 31. “There has been so much interest in looking at them, that we saw no reason to take them down. People have been loving them!” says Bessire. “Plus, we figure that the more people see them, the more participation we will get.” As of December 20, the PMA cumulatively received 1,445 public comments onsite and online about the finalists. Once the winning architectural team is chosen by the 12-person jury, the public is encouraged to continue to present opinions and feedback, either on the PMA’s website or in person. Those interested in getting involved further can sign up to be a part of discussion groups that will help to shape the evolution of the project, which has a tentative completion date of 2026.

“There are probably ten museums or wings built in this country every year. It’s a really big moment for a community to have this opportunity to think about what they want,” says Bessire. “We are so thrilled that we’ve had so much feedback about this process, and that we’ve been able to have these architects come talk to us. Portland is a great town to be thinking about what the future of museums could be. I think we can create a museum that other museums across the country are going to want to emulate.”

Follow along on an MH+D field trip to check out the models of the four finalist designs! 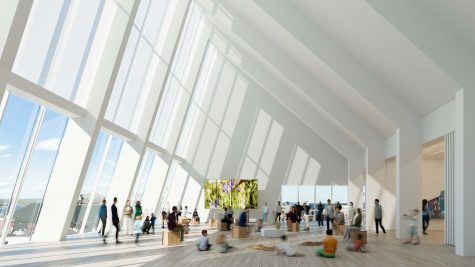 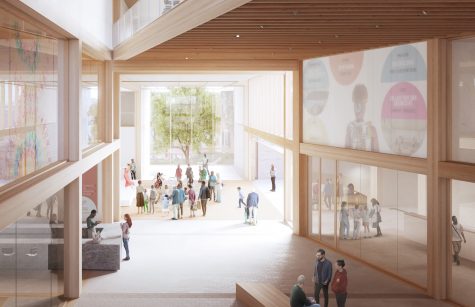 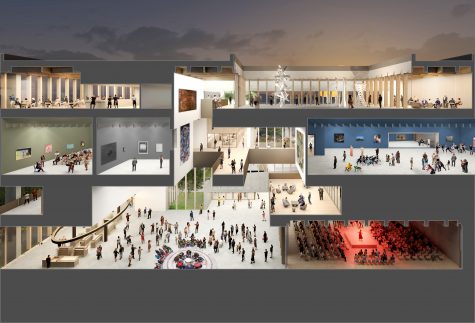 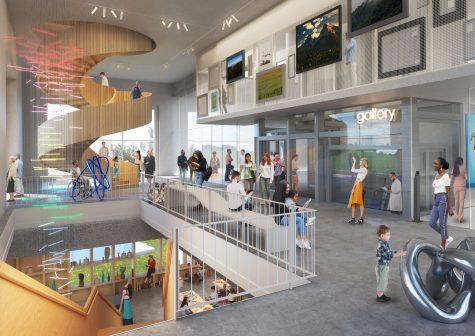