Around the world, far too many feet have been afflicted by the razor-sharp edges of Legos. LEGO and IK 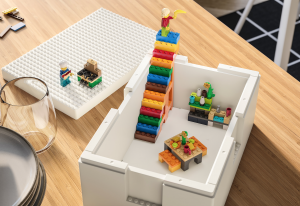 EA have teamed up to create a solution that may soothe weary soles: a unique storage system that doubles as a play structure, called BYGGLEK. Available in four different sizes, the white boxes are covered in Lego studs for easy building. The hope is that the boxes will serve as a base for building Lego structures while still leaving enough room to store extra pieces. The boxes can hold hundreds of Legos, and they come without instructions as a way to help foster creativity.

A new retail and apartment complex is planned for 52 HANOVER STREET in Portland. Developer Tom Watson of PORT PROPERTY MANAGEMENT is proposing a six- to eight-story mixed-use building that will house 171 apartments with retail spaces on the ground floor, including a cafe. Other elements will include a grassy courtyard and a pedestrian walkway that borders local restaurants and businesses on Hanover Street. At least 10 percent of the apartments will be dedicated workforce housing, with the remainder set at market rate. It’s unsure when the project will begin or even be fully approved, but a proposal was submitted to the city planning staff in early September. 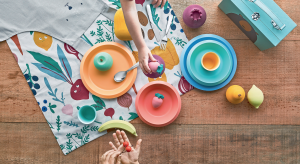 The average child’s dinnerware set is made from cheap plastic and barely resembles adult utensils. In a collection for ALESSI, Dutch designer BEN VAN BERKEL was inspired by his fiveyear-old son to create a tableware set of bowls, plates, and cups—made from melamine and bamboo—and polished steel silverware that is a scaled-down replica of adult silverware but with handles that are easier for small hands to grip. Creating kid-sized adult tableware signals to children that they are equals within their families. “Many kids often have separate menus and utensils, so no wonder they don’t feel like they can eat the same food adults eat or participate in the conversation around the table,” says van Berkel.

Once every decade, the GIRL SCOUTS OF THE USA redesigns its uniforms. The newest ones, designed by three students from the FASHION INSTITUTE OF TECHNOLOGY (FIT), is a collection of clothing that considers both young and old members. Rather than a standard-issue uniform, the line features dresses, skirts, joggers, pants, hoodies, a denim jacket, and a vest or a sash for displaying badges. In an effort to create the line as sustainably as possible, the students designed the collection virtually, and to reduce inventory waste FIT is working with the Girl Scouts on a supply chain that will make each piece as it’s ordered.

REDFERN PROPERTIES has proposed an 18-story apartment building at the intersection of Federal and Temple Streets in Portland. At 190 feet (not including any rooftop equipment or architectural cap), the planned building would be the tallest in Portland. More than 260 units would be constructed: roughly 118 studios, 146 one-bedrooms, and 2 two-bedrooms; pricing would range from $1,200 to $2,000 a month. Parking is planned for Chestnut and Temple Streets, but Redfern owner Jonathan Culley expects that most tenants will be attracted by the potential to ditch their vehicles in the long term. The Portland PLANNING AND URBAN DEVELOPMENT staff is reviewing the project, but meeting dates have yet to be scheduled (as of October). 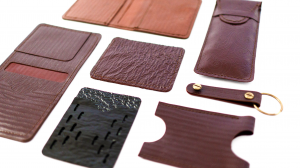 Vietnamese designer UYEN TRAN has created a biodegradable leather alternative called TÔMTEX. The flexible biomaterial is created from a mixture of discarded coffee grounds and a biopolymer called chitin, which is found in the exoskeletons of insects and crustaceans—chitin makes the shells tough but still pliable. “After mixing all the ingredients, the biomaterial can be poured into a mold, where it is air-dried at room temperature for two days,” says Tran. “The process doesn’t require heat; therefore it saves energy and reduces carbon footprint.” Molds are created through 3D printing, allowing Tran to mimic snakeskin or crocodile, as well as create more complex embellishments. The mixture and production process can also be altered to result in a more plastic- or rubber-like material, so the biomaterial can be used for everything from fashion to packaging. And, when you’re ready to dispose of the product, Tran says, it can be recycled or left to biodegrade, acting as a fertilizer for plants. 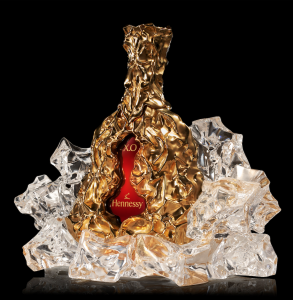 Renowned architect FRANK GEHRY has created a liquor bottle to look like crinkled gold in honor of Hennessy’s 150th anniversary. The limited-edition bottle for HENNESSY’s XO COGNAC was made from 24-karat-gold-dipped bronze, meant to embody the handmade quality of the drink inside it. In addition to the bottle, Gehry formed a crystal glorifier to display it, as well as a fusil—used to taste small amounts of liquor to test its quality—from brass and gold. In a nod to the furniture Gehry designed in the 1970s, everything comes packaged in a corrugated cardboard case.

Chinese studio ARCHITECTURAL DESIGN AND RESEARCH INSTITUTE OF ZHEJIAND UNIVERSITY has completed the world’s longest glass-bottomed bridge. Spanning 526 meters (1725.72 feet), the bridge was built as a tourist attraction over the Lianjiang River in the Huangchuan Three Gorges Scenic Area in southern China. The deck is composed of three layers of tempered laminated glass that’s less than 2 inches thick; it has a capacity of 500 people. It’s suspended by cables and has wide sections that allow visitors to stop and take photos. Guinness World Records has officially recognized it as the longest glass-bottomed bridge in the world.

Three dozen single-family homes are set to be constructed at BRUNSWICK LANDING. SHIPYARD VENTURES is developing the lots, which GRAVIER HOMES intends to purchase for the new residential area. The cost of the homes will range from $275,000 to $350,000 once completed and will be categorized as workforce housing. Already in its second phase, the development is expected to be complete by spring 2021. During phase one, five out of eight homes were sold affordably. “We’re looking to bring an affordability not seen in Brunswick for a long time,” says Loni Gravier of Gravier Homes.