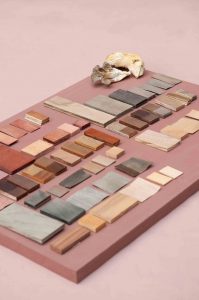 Designer MARIAH WRIGHT of CIRCULAR UNION has launched MUSH-HUES, a research and design project focused on creating environmentally friendly dyes for wood and textiles. The colors are made from farmed or foraged mushrooms that have been steeped in hot water. The final color collection includes more than 50 recipes, with a palette that ranges through mustardy yellows, soft greens, blue-grays, burgundies, and a few bright pinks. In an effort to be as sustainable as possible, Wright collaborates with farmers to use damaged or overripe mushrooms in the process. Because Mush-Hues was created without the use of pollutants or toxins, every dyed piece can be burned or returned to the soil at the end of its life. 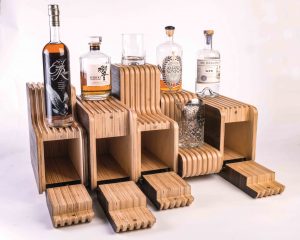 heirloom pieces, has launched a new collection of furniture items and table accessories. “The pieces share common features, from juxtaposed design elements to contrasting colors, and often combine materials in interesting, synergistic ways,” states Dezeen. From the collection, the TEC TONIC BAR is a multilevel tabletop accessory that can display up to ten liquor bottles and store eight tumblers or other bar items within hidden compartments. The LODE SHELF changes in appearance depending on how it’s viewed due to individual ribs that allow light and shadow to pass through; its shape was inspired by Iceland’s basalt cliffs and other similar geological formations. 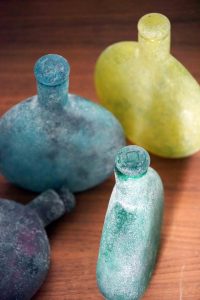 In collaboration with Venetian glass studio LAGUNA B, Beirut design studio T SAKHI has created two Murano glass tableware collections that experiment with texture. In the first collection, TASTING THREAD, founders and sisters Tessa and Tara Sakhi collected metal threads and powder from factory waste streams and incorporated them into the glassware. Tasting Threads comprises long and short glasses, flat plates, shot glasses, and deep bowls. Bright colors were chosen to resemble precious stones such as amethyst, ruby, and cobalt. In the second collection, NOMAD, a sand-blasting technique was employed for a rougher finish and craquelure effect. Nomad largely comprises carafes in various sizes. The designers plan to release a third collection called I HEAR YOU TREMBLE, which will feature “extraterrestrial” glassware. 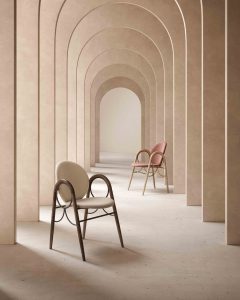 a chair created by late architect NANNA DITZEL in 1983. Called the ARKADE CHAIR, its form alludes to arcade architecture, which is characterized by a series of arches. The chair is composed of steam-bent wooden legs, curved circular seating, and sleek metal supports. Each element comes in a variety of finishes: the legs can be natural or stained oak, the frame comes in brass, black, or chrome, and upholstery options include various textiles and leathers. Ditzel was an architect who originally trained as a cabinetmaker, and she created many furniture designs for Brdr. Krüger during her career. Ditzel developed the Arkade chair with NEILS KRÜGER, a relative of the Brdr. Krüger founders. 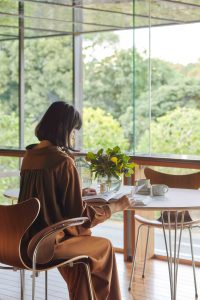 Danish furniture company FRITZ HANSEN has launched a 50th anniversary LILY CHAIR. Perhaps one of ARNE JACOBSEN’s most elaborate designs, the chair was created to resemble a lily with open petals. The anniversary edition comes in a natural walnut exterior veneer and beechwood interior veneer with chrome legs, a historic use of materials, given the difficulty of making curved armrests without cracking the exterior veneer. The Lily chair is available with or without the curved armrests, and each chair comes with a special anniversary tag mounted under the seat.

The U.S. DEPARTMENT OF TRANSPORTATION’s AIR IMPROVEMENT PROGRAM granted the WISCASSET MUNICIPAL AIRPORT $3.2 million to repave its only runway. The airport is town owned and largely used by private planes. Its original runway was built in 1961, and according to town records the runway hasn’t been repaved since 1968. Since the COVID-19 outbreak, the airport has seen a 67 percent decline in traffic, but there is hope that a restored runway will bring in new business. “This paving project is badly needed,” says Steve Williams, chairman of the Wiscasset Airport Advisory Committee. 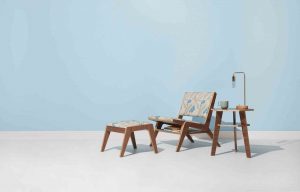 and furniture collection from the FRANK LLOYD WRIGHT FOUNDATION has been launched. In collaboration with INSIDE WEATHER, the USONIA collection comprises three pieces: the Edgar Lounge chair, the West Ottoman, and the Hanna Side Table, with 16 upholstery designs based on Wright’s 1955 designs. The collection is evocative of Wright’s Usonian furniture and architecture, and each piece
is made in the US. Inside Weather works to produce as little waste as possible during the manufacturing process. 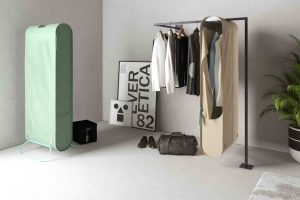 As the world adjusts to a new normal, designers are creating solutions to previously unforeseen problems. Italian studio CARLO RATTI ASSOCIATI’s newest concept can sanitize your clothes inside your closet. The battery-powered wardrobe purifier, called the PURA-CASE, is an airtight portable case that uses ozone to disinfect clothing. Viruses and bacteria can live on clothing for long periods of time, and ozone has the ability to remove up to 98 percent of pathogens contained within the case. The purification process takes one hour and can be started and controlled through a Pura-Case mobile app. Tech startup SCRIBIT commissioned the Pura-Case project and is developing a prototype in its Turin, Italy, factory. The case will soon be available on Kickstarter.