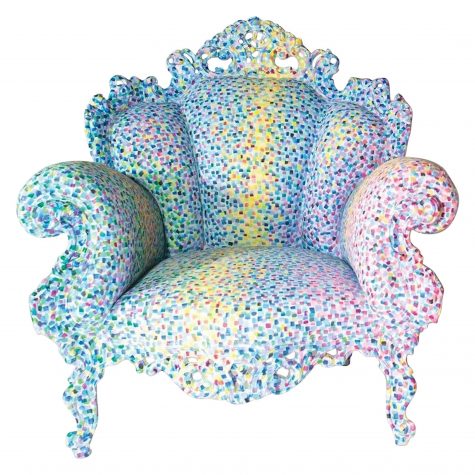 It’s not considered to be the most practical chair, but it has had a serious impact on design history. In 1978 Italian designer and architect Alessandro Mendini (1931–2019) designed his Proust chair for the Palazzo dei Diamanti in Ferrara during an exhibition entitled Incontri ravvicinati di architettura (Close Encounters with Architecture). Mendini called the chair a redesign; he took a ready-made oversize baroque armchair, painted the wood of the chair white, and upholstered it in white fabric. He then projected a pointillist painting by artist Paul Signac onto the chair and painted its pattern all over its elaborately carved scrolled arms, curved legs, and front piece.

At the time Mendini was part of Studio Alchimia, a group of Italian designers rebelling against what they viewed as the “coldness of modernist design.” Studio Alchimia helped launch the postmodernism movement, known for poking fun at stern modernism. The group was formed just before another Italian postmodernist movement, Memphis, launched in the 1980s. “I think the Milanese movements, Alchimia and Memphis, had a very important role in freeing design from the nightmare of functionalism and technicality, and in bringing design closer to the world of art,” said Mendini in an interview with the British publication Metro in 2015.

Why “Proust” chair? Mendini set out to make a chair he thought French author Marcel Proust might sit in to relax while remembering things past. The title is a reference to the idea of memory. He often said he was transforming objects like an author transforms a character in a novel: “The objects are like personalities; all my objects are like characters. One is good, another one is bad. It’s a kind of comedy and tragedy.” Mendini viewed creating the chair as an intellectual exercise, and he created it mostly for amusement. However, he did not intend to mock pointillism, which he said was a real theory: “Because if each point is good, the whole object is good,” said Mendini. “Also, in society: if each person is good, the society is good.”

Mendini also worked as a journalist, editing the design magazines Casabella (1970–1976), Modo (1977), and Domus (1979–1985 and 2010). He used these publications to promote the ideology of the postmodern movement he championed. In 1989 he set up an architecture practice with his brother Francesco and ran their company, Atelier Mendini, right up until his death in 2019. It is not known how many Proust chairs were originally made by Studio Alchimia, but it is estimated at between 15 and 20; some of these are signed on a leg by Mendini. (As we put this issue to bed, there was an original Proust listed for sale on the website 1stDibs for $43,174.) The Proust armchair is still being made by Capellini, although the fabric is now printed, not painted.