October, 2020 | By: Danielle Devine | Photography courtesy of Design Within Reach 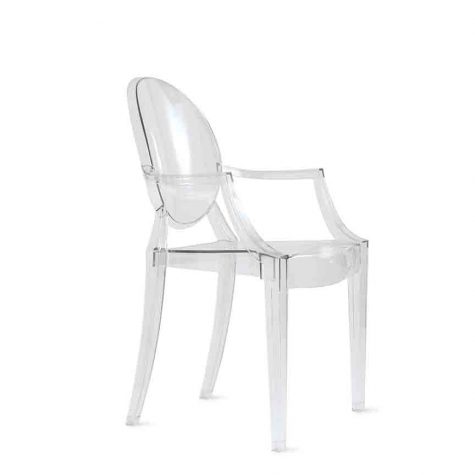 King Louis XVI of France ruled France with his wife Marie Antoinette from the mid- to late-1700s. The couple was known for their extravagant taste and elaborate furnishings at the Palace of Versailles. The most well-known chair designed during their reign had a round upholstered back, column-like legs, and an exposed clean-lined wooden frame. It is now known as the Louis XVI Chair.

Contemporary French designer Philippe Starck rose to fame after he designed a pair of chic Parisian night-clubs in the 1970s drenched in Lucite (clear plastic). But it wasn’t until 2002 that Starck decided to reinvent the classic Louis XVI Chair, creating the much-loved Louis Ghost Chair with the Italian manufacturing company Kartell, who is known for its innovative use of plastics. The Ghost Chair is made by injecting transparent polycarbonate plastic into a single mold; the chair is thus one continuous piece.

The magic of the Louis Ghost Chair is that it can be used indoors or outdoors. It has no joints so it won’t freeze in the snow or crack in the rain, and it can easily be stacked. It is a postmodern masterpiece that can be mixed in a very traditional interior because of its shape, but it’s equally at home in the most contemporary spaces. Like a ghost, you won’t even notice it at first—but when you do, it will haunt you.

The Louis Ghost was an instant success and inspired Starck and Kartell to create other, related pieces, including the Victoria Ghost Chair and the One More bar and counter stool. The crystal clear Louis Ghost remains the most iconic version, but Kartell also produces the Ghost Chair in a range of translucent shades, as well as in two solid hues: black and white.