These elaborate shellwork mosaics took more than 100 hours to create 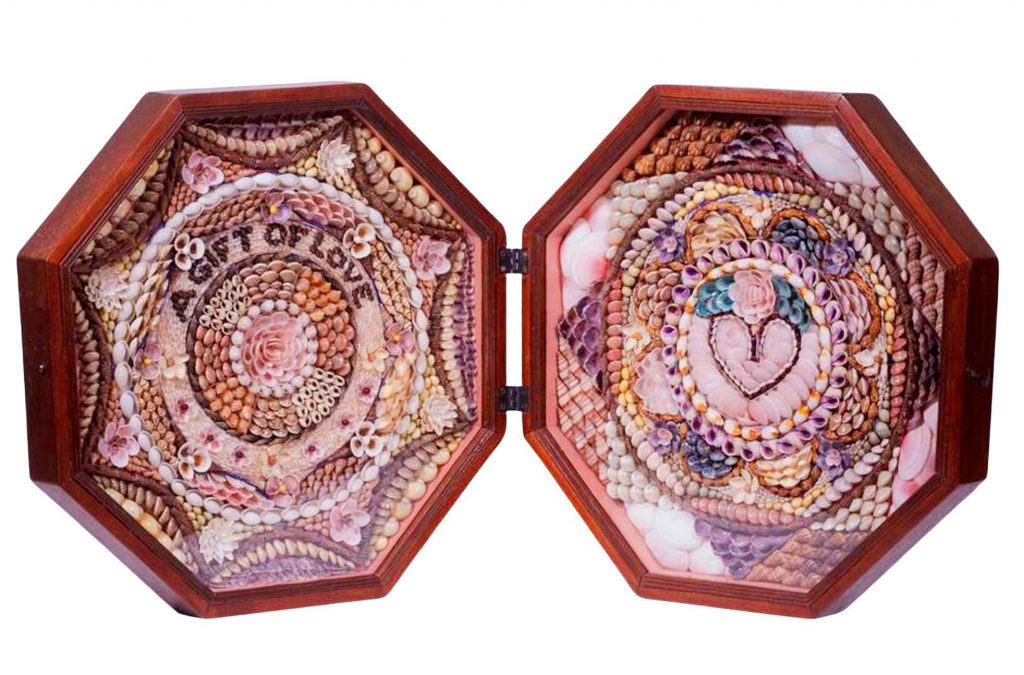 It’s a romantic tale: lovesick sailors, away for months or some-times years on whaling and merchant voyages, collected shells on tropical islands and spent hours assembling elaborate shellwork mosaics to bring back to their sweethearts. The truth is that the intricate shell mosaics known as sailor’s valentines were purchased in the 1800s by sailors as ready-made gifts, primarily from a cottage industry of makers in Barbados. This fact came to light in an article written by Judith Coolidge Hughes for The Magazine ANTIQUES in 1961. Hughes disclosed that a woman restoring an antique sailor’s valentine from a Massachusetts collection discovered an early 1800s clipping from the newspaper The Barbadian in the backing. The clipping mentioned that these “fancy work” items were for sale at Belgrave’s Curiosity Shop in Bridgetown, Barbados.

Ships often landed in Barbados as their last stop before returning to the United States or the United Kingdom. Belgrave’s Curiosity Shop was owned by English brothers B. H. and George Belgrave, who hired local women to create these works. Sailors on whaling ships would not have had all the components and equipment needed to create these mosaics: hundreds to thousands of tiny shells, seeds, wood, nails, cotton, glue, wax, cardboard, newspaper, colored paper, varnish, glass, hinges, screws, hooks and eyes, paint, and gilding. Nevertheless, sailor’s valentines were considered maritime crafts, like scrimshaw (scenes from sea voyages etched on whale teeth using sail needles). This was during the Victorian era and curiosity cabinets across the United Kingdom, the Netherlands, and the United States were filled with unusual shell specimens.

Most valentines took over 100 hours to make. They were inset in wooden octagonal hinged boxes, ranging in size from 8 to 18 inches wide and from 2.5 to 3 inches high; mahogany veneer was often used for the sides and native cedar wood for the bottoms. The shells and seeds were then glued on cotton batting. Colored paper was placed on the edge to delineate the designs, which often included hearts, flowers, and nautical symbols such as anchors or compass roses; some included messages like “Home Again” or “Forget Me Not.” After gluing down all the shells, the maker placed a piece of glass over the design to protect it when the box was opened.

The most valuable examples were made between 1830 and 1880 and can fetch up to $30,000 at auction. Occasionally a large single valentine will come on the market, but this means it has been separated from its other half. Condition is important when considering the purchase of a sailor’s valentine. The work should not have any missing shells and the box should be as damage free as possible. The more desirable valentines will incorporate motifs other than the heart and compass rose design. There are contemporary makers still creating these valentines today.