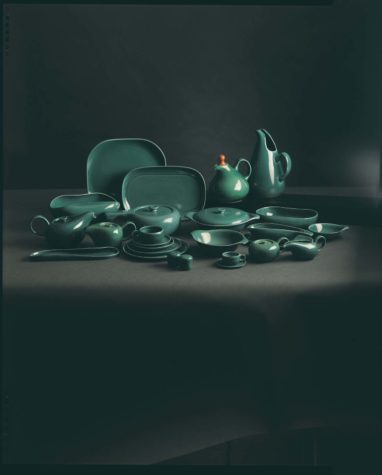 Industrial designer Russel Wright’s American Modern dinnerware was in production for two decades and grossed over $200 million in sales, earning it the title of the best-selling mass-produced dinnerware ever manufactured. Both practical and contemporary, the designer declared it to be the “little black dress” of dinnerware—perfect for sophisticated dining for ten, or casual coffee for two.

Throughout his career, Wright designed practical objects for the home, including furniture, lighting, textiles, spun aluminum punch bowls, melamine dishes, and silverware. Although he was already established as a designer by the 1930s, it took him two years to convince a pottery maker to put his dinnerware into production. Eventually, in 1939, Ohio-based company Steubenville Pottery agreed to take on Wright’s American Modern line (only because the company desperately needed a success story to save itself from bankruptcy). The organic forms of Wright’s dinnerware contrasted with the strong angles and ornate patterns found in formal dinnerware of the time. American Modern dinnerware was long and curved, with distended necks and spouts that facilitated the flow of liquids, and indentations on the bowls and the salt and pepper shakers that provided convenient handholds. The earthenware sets were designed to be interchangeable, in a choice of four different glazes: Chartreuse Curry, Granite Grey, Seafoam Blue, and Bean Brown.

Wright believed the table was the center of the home and designed his housewares accordingly, all with the goal of facilitating easy, carefree living. His pieces were functional not only in shape but in use, too. While a certain amount of informality had been tolerated in the design of breakfast and luncheon services, dinnerware had continued to imply formality. Wright’s pieces were meant to go from the oven to the table, underscoring the changes to society brought about by the Great Depression. American Modern dinnerware was intended as an affordable option for the growing middle class of the time, who could no longer afford servants. Wright’s dinnerware signaled the democratization of the American table.

Wright proved that good design could truly be for everyone—including children, who were able to play with miniature plastic replicas of American Modern pottery produced by the Ideal Toy company in the mid-1950s.

Today, more than three-quarters of a century later, Russel Wright’s American Modern dinnerware is handmade exclusively by Bauer Pottery of southern California (the company for which Wright designed after World War II), which maintains the muted, versatile original hues that have become emblematic of modernist aesthetics while also incorporating exclusive new colors. Wright’s original vintage earthenware pieces are highly sought after but remain hard to find unchipped given the delicate nature of earthenware.