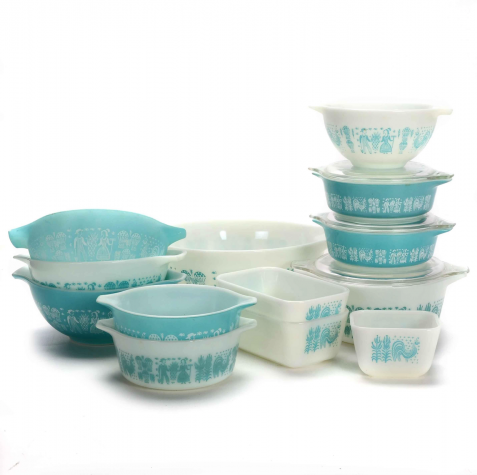 Most Thanksgiving tables are not complete without a piece of Pyrex. Pieces made from 1945 through the late 1960s might be the most popular vintage collectible right now due to the nostalgic aspect, price point, and of course, remarkable design.

The origins of this cookware lie in a problem the railroad industry faced in the early 1900s with broken lantern globes. When the lanterns were hot, rain or snow would cause them to crack. Scientists at Corning Glass in New York found a solution to this problem with borosilicate glass that was shock resistant to reduce breakage. It fixed the lantern problem, and globes no longer needed constant replacing. Borosilicate was then used for other industrial products like wet cell battery jars.

After Corning scientist Jesse Littleton’s wife’s casserole dish cracked, he brought home a cut-down battery jar for her to use as a baking dish. She used it to bake a cake and found that it cooked faster in glass, with the added benefit that she could see it as it baked. Corning’s first line of clearglass Pyrex ovenware debuted in 1915 and featured 12 pieces that included casseroles, custard cups, a bread pan, pie plates, and egg dishes. It sold over four million pieces in its first four years of production. The cookware was an immediate success with homemakers who were used to cooking in metal pans and earthenware, which would often retain food smells after washing. For the first time, they could bake, serve, and store their food in the same dish.

Much of this success was owed to great advertising campaigns that appealed to women, with slogans like “Tough as nails and guaranteed!” and “Yes, it’s glass and can break but rarely does.” This is why, during World War II, the U.S. Army contracted Corning to make mess ware that could withstand heavy use. This commission launched Pyrex opal ware, made from tempered soda-lime opal glass rather than borosilicate. Using its prewar molds, new Pyrex products were made out of opal or white glass, sprayed with a bright color, and then printed with over 150 patterns, including the wildly popular turquoise and white Amish butter print, shown here. Pyrex was an all-American staple that promised easy meals, spotless kitchens, and happy marriages.

The cookware was also promoted in movies and on television shows during the 1950s and 1960s. In Breakfast at Tiffany’s, Audrey Hepburn’s character, Holly Golightly, uses Pyrex bowls to serve food to her party guests and nameless cat.

With the advent of the home microwave in the 1980s, Pyrex’s marketing was all about calling attention to the fact that Pyrex could be used in the microwave. In 1986, however, U.S. Pyrex opal ware manufacturing was discontinued. Today, clear and patterned Pyrex is still being produced by Corelle Brands (formerly World Kitchen).

Tip: Never ever put any vintage Pyrex through a dishwasher. It is one of the fastest and most common ways to damage your Pyrex, as it will etch away at the color.