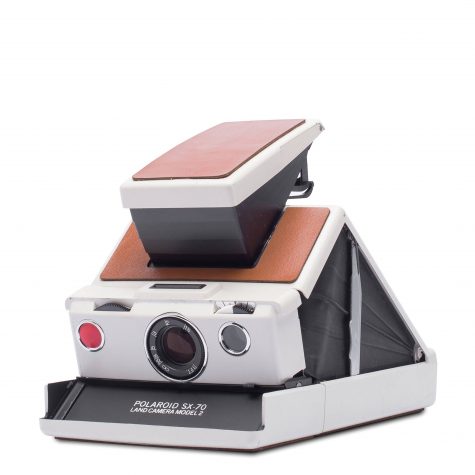 Today we use our phones to take the majority of our pictures. Presciently, the inventor of the Polaroid camera, Edwin Herbert Land (1909–1991), predicted in a 1970 short film he shot for his employees (you can find it online) that there would be a wallet-sized phone/camera that everyone would be using in the future. Land, a Harvard dropout, left college to pursue his fascination with polarized light, in which all rays are aligned in the same plane. He soon created his own company, which eventually became Polaroid. He was constantly inventing, filing for over 580 patents in his lifetime. Did you know that Steve Jobs called Land his boyhood hero? When asked about Land, Jobs famously said, “He saw the intersection of art and science and business and built an organization to reflect that.” Jobs modeled Apple after Polaroid, and we know he visited Land throughout the 1970s and early 1980s at Polaroid. You might even notice the same strips of colors used for Apple’s original logo are the same colors Polaroid used in their branding. The colors actually represent the numerous layers of chemicals found in the instant film that Polaroid insiders called “the goo.”

Land first conceived the idea for a polarizer while at summer camp in Connecticut at age 13 after watching a demonstration by one of his counselors. He went on to design items including polarized glasses, goggles used in World War II, and car headlights. He did not consider instant film, the story goes, until he went on vacation to Santa Fe with his wife and daughter and was asked by his young daughter why she couldn’t see the photos he had taken right then. He spent the rest of that night working on the idea, eventually creating a camera that could produce a developed image in seconds. Land’s instant camera was first marketed in 1948; it sold out at the Jordan Marsh department store in one day, and over 900,000 of the first model were sold within a year.

There were important developments along the way, including the release of color film in 1963. The best-known model of the Polaroid camera was the SX-70, released in 1972. This is the model with the red push button so many of us knew growing up. Designers Charles and Ray Eames even did a documentary/ad about it the year it was released. The SX-70 was considered a miracle of physics, optics, and electronics, containing 200 transistors and a complex of moving mirrors, light sensors, gears, and solenoids. It was this version that allowed the user to merely point, focus, and click. The result was a palm-sized photo with a white border that would develop before your eyes. What was even better was that the instant film pack included a built-in battery: the new model ejected the pictures automatically rather than the user having to open the case and peel off a layer of film like previous models.

Many famous artists have embraced the Polaroid camera, including Walker Evans, Ansel Adams, Richard Avedon, Robert Mapplethorpe, and Andy Warhol. The fascination with seeing and sharing a moment immediately was the core of much of Warhol’s work, and the majority of his work in the 1970s began with Polaroid photos. Since the film did not need to be sent off to a lab to be developed (or seen by anyone else), there was an intimacy between the artist and subject, resulting in what many consider to be “unconventional” poses.

The Polaroid company was extremely successful, with an estimated worth of $3 billion in the 1990s. But as digital cameras evolved, it was pushed under by digital film, and Polaroid announced that it would stop producing the film in 2008. A group known as the Impossible Project (now simply called Polaroid) stepped in to keep the analog products alive.

Our family recently received a new Polaroid camera as a gift. The first thing we questioned was if we should shake the film to decrease the developing time or just let it sit. We always shook them as kids, and many of us are familiar with the lyrical command from the OutKast song, “Shake it like a Polaroid picture.” After much debate and extensive research, we found it is better not to shake.

This incredible innovation can be found in the permanent collections of museums across the country, including the Cooper Hewitt, Smithsonian Design Museum in New York City.