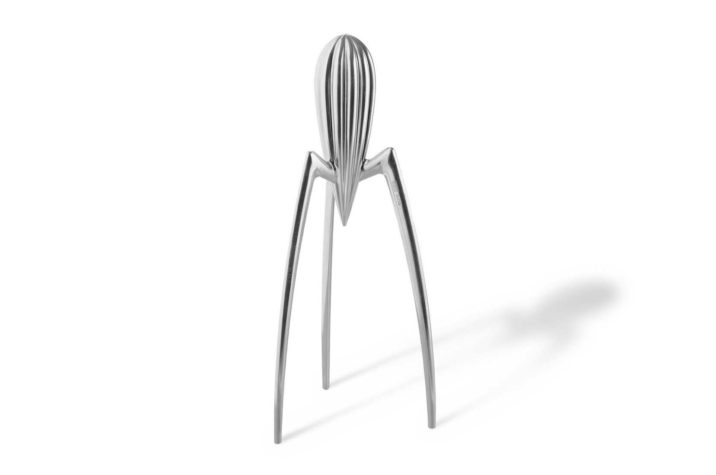 The story goes that architect and industrial designer Philippe Starck was on vacation on the Amalfi coast and stopped at a pizzeria for lunch. Before he left for his trip, he had been commissioned by Italian manufacturer Alberto Alessi to create a tray for his company. When Starck’s order of calamari arrived at his table that day, he noticed they failed to give him lemon. It was then that he decided to use his napkin to sketch ideas for his innovative lemon squeezer inspired by his lemon-free squid. It wasn’t a tray, but when Alessi received the napkin in the mail he jumped out of his chair and immediately wanted to put it into production. “It was a big joke,” Alessi famously declared, “deliberately poking fun at the idea that form should follow function.”

The cast and polished aluminum Juicy Salif Lemon Squeezer by Starck was first produced in 1990 and embodies form over function. It has a creepy shape—a cross between a spider and a rocket. Although the squeezer does work, the legs often wobble, it makes a mess of the work surface, and the seeds go directly into any glass placed under the body for catching lemon juice. The squeezer is part of the permanent collections of numerous museums, including the Metropolitan Museum of Art, the Museum of Modern Art, and the Victoria and Albert Museum. “Starck has imbued what was a perfectly adequate kitchen drawer filler with aspirational desirability, indications of intellectual meaning, and a mythical lack of juicing prowess,” says Michael Czerwinski, of London’s Design Museum. It is still a best seller and Alessi has also produced 10,000 gold-plated versions (which were never intended for use as the citric acid in the lemon would eat away at the gold plate).

As for the original napkin sent to Alessi? It can be now found in the Alessi Museum in Omegna, Italy—with authentic grease, sauce, and lemon stains intact.