The architecture of this midcoast home is informed by its natural landscape and surrounding boulders. 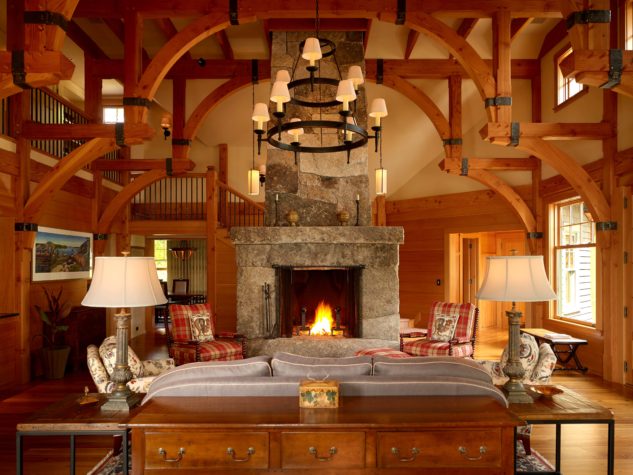 “The intent of the design of this house was to fit into its natural surroundings, in terms of its floor plan as well as the exterior massing and the way it sits on the land. We took a lot of care to make it nestle into the woods even though it’s a pretty large building. The choice of material in the living room—the trusses and the big stone fireplace—really reflect the overall attitude, which is rustic and woodsy and gutsy.

“The fireplace in particular took a lot of inspiration from stones that we found on the site. You have these erratics—large random boulders—that appear on the site. They’re scattered around the building, and the one big stone that forms the base of the chimney is there front and center, right at the heart of the house. The fireplace was built by Freshwater Stone, and they constructed it offsite so that it could be studied before it was actually assembled in place. The selection of all the major stones, not just for that piece, but others used in the building, came about as a result of a search in a nearby field in an old abandoned quarry with the owners, landscape architect, architect, and builder looking for specific stones.

“The Douglas fir was a choice that was made early on. It’s an appropriate material for the rustic personality of the house and its informal nature. It has a long history of use in coastal summer architecture that made it a fitting choice for striking the right tone in terms of the feel of the house. It’s not an uptight painted house; it’s natural, it’s woodsy and cozy, and it has a lot of warmth. The upper reaches of the room were intentionally left painted plaster for lightness, so that there wasn’t an overwhelming amount of wood; we were trying to find a balance between the amount of natural wood in the space and plaster’s reflective qualities. There are numerous high windows in the space because we wanted it to have a very light-filled and cathedral-like feel with sunlight entering up high and being reflected off the upper reaches of the room.”