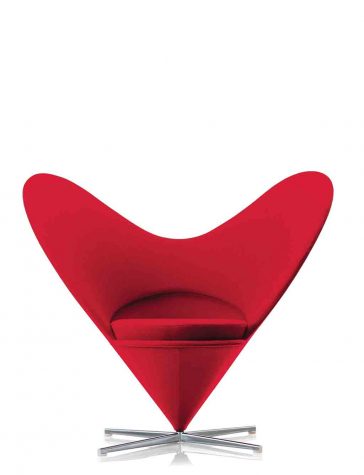 Often when we think of Danish modern furniture we think of sleek wooden designs. In the mid 1950s Danish designer Verner Panton decided to convert his Volkswagen bus into a mobile studio and to travel across Europe. The designer came back filled with inspiration and unconventional ideas. One of the most famous pieces that resulted from this renewed creative stream was Panton’s Cone Chair, based on simple geometric shapes and made using steel, aluminum, molded plastic, and wool upholstery. The Cone was the springboard for the Heart Cone Chair designed in 1959, which was a Panton’s take on a traditional wingback chair.

“The main purpose of my work is to provoke people into using their imagination,” Panton said. “Most people spend their lives living in dreary, grey-beige conformity, mortally afraid of using colors. I try to show new ways, to encourage people to use their fantasy imagination and make their surroundings more exciting.” The Cone Heart chair in bright red—a fun Pop Art piece of furniture for the home or office—is the epitome of embracing the imagination.

The Heart Cone Chair caused a huge stir in New York City when first displayed in a store window. The police ordered that it be removed because of the traffic chaos it created. The chair became even more popular after it was used as a backdrop for a nude photography shoot for Mobila magazine. Panton is perhaps best known for his S-shaped Panton Chair, but the Cone and Heart Cone chairs are often used on film and movie sets and can be found in the permanent collection of several museums across the world.

Panton’s love of intense color defined not only his furniture but also his lighting, textile, and wall decorations. “In Kindergarten, one learns to love and use colors, later on, at school and in life, one learns something called taste,” said Panton. “For most people, this means limiting their use of colors.”