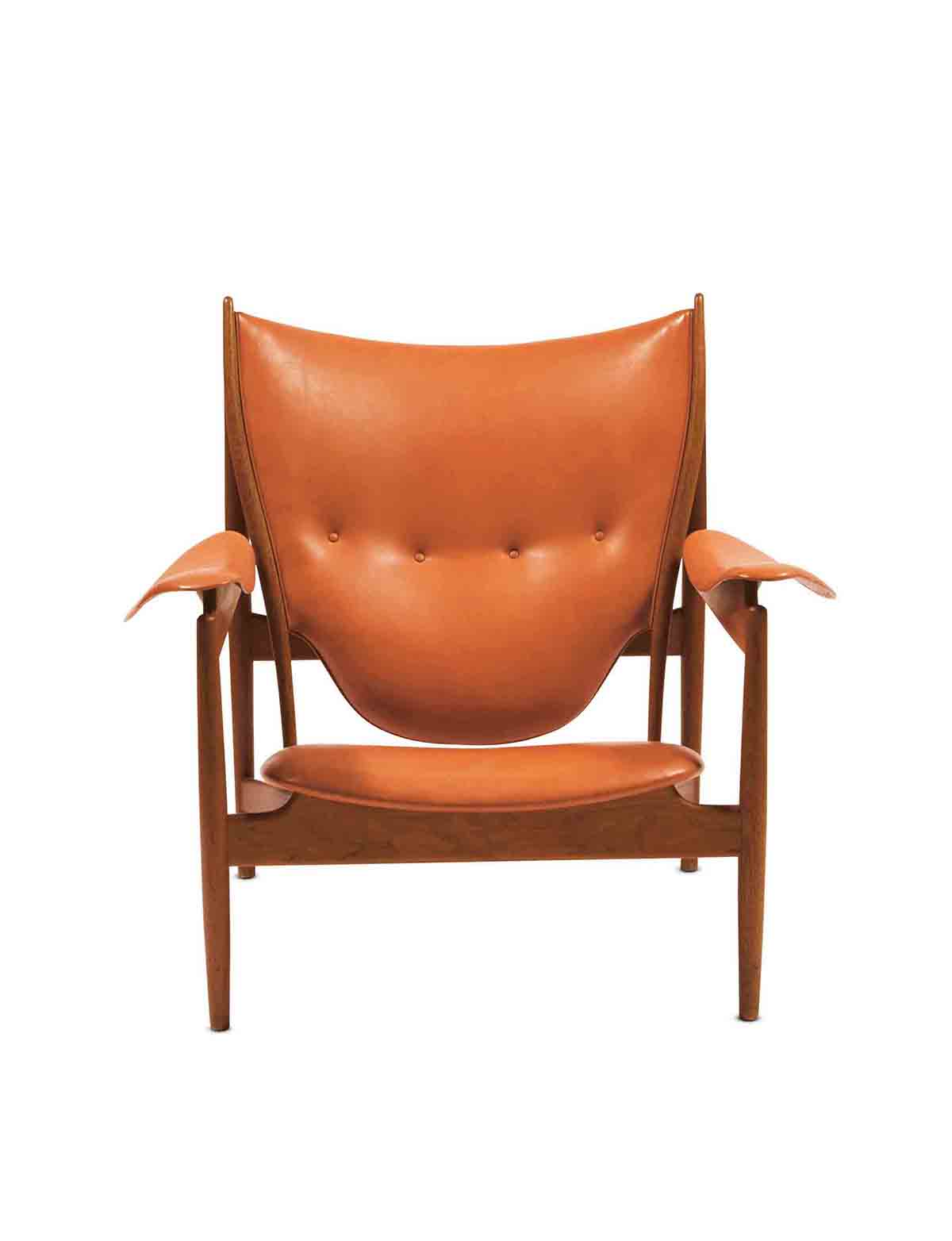 Architect Finn Juhl belonged to the inner circle of the most prominent Danish furniture designers during the “golden age” of Danish furniture after WWII, a group that included Arne Jacobsen, Hans J. Wegner, and Poul Kjaerholm. Juhl’s most famous design, the Chieftain chair, started with a small sketch one morning, “just four vertical lines connected with ‘something,’” Juhl noted. The design mimics the contours of the human body and is the ultimate blend of comfort and function: a large seat that appears to be suspended within the hardwood frame, a leather back that cradles the body, and armrests reminiscent of saddles so the sitter’s arms can be in their most relaxed.

Juhl was enrolled in the Department of Architecture at the Royal Academy of Arts in Copenhagen and, according to his own account, he had no sense of joinery or wooden constructions. He relied on his own intuition and basic measurements of the human proportions when designing a piece of furniture. In 1937 Juhl met the 20-year-older master joiner Neil Vodder, who was able to translate his drawings into products of the highest quality. This synergy between Juhl and Vodder resulted in the “FJ 49 A” or, as Juhl referred to it, the “Big Chair”—what is known today as the Chieftain chair. Prior to designing his most iconic seating, he had been creating small, handy chairs with the help of Vodder, but Juhl said he “felt like designing something a bit more pompous.” The chair is a departure from the Empire-style tradition of putting furniture against the wall, and was made to be appreciated like a piece of sculpture, viewed from all sides.

The chair received its better known name at the 1949 Cabinetmakers’ Guild in Copenhagen. King Frederik and Queen Ingrid of Denmark attended the opening of the exhibition every year. “When the chair was brought in someone asked me who the chair was for, so jokingly I answered, ‘King Frederik,’” said Juhl. “However, of course we couldn’t call it ‘the King Chair’ or ‘the King Frederik Chair’ because he hadn’t asked for it, nor had we asked him.” It was then that Juhl explained that it was made for some random ruler: it was the Chieftain’s chair. Over time the apostrophe and s were dropped and the number of buttons on the back of the chair fluctuated between three and four.

The Chieftain chair relaunched in 2002 and is now made to order by the House of Finn Juhl, a design collective with exclusive rights to manufacture and produce 40 of Juhl’s classics.

The Chieftain Chair received the Danish Design Award in the Classics category for 2012. In 2013 an original Chieftain sold at a Phillips auction in London for $679,099.