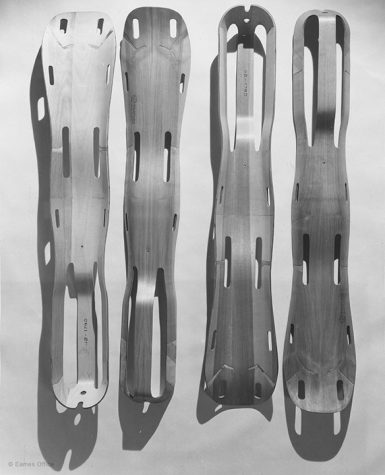 The Eames lounge chair is probably one of the most recognized chairs of the twentieth century, but it wouldn’t exist without the Eames leg splint.

In the early 1940s, Charles and Ray Eames would spend their evenings experimenting with plywood in the guestroom of their home they had converted into a workshop. Their trials used what they called the “Kazam! machine.” The homemade contraption was made using wood scraps and spare bicycle parts with a hinged and bolted curved plaster mold fitted with electrical coils running through to provide excessive heat. They would place a piece of veneer (a thin plane of wood—the “ply’” in plywood) in the mold and add a layer of glue on top. This process was repeated up to eleven times, resulting in a glued sandwich of veneers. The layers were pushed against the mold by a membrane (balloon) that was manually inflated by a bicycle pump. “A la Kazam!”—like magic, bent wood. The first innovation of the Kazam! machine was the molded plywood splint.

In the early days of World War II, the U.S. military used metal leg splints. The metal caused uncomfortable vibrations to the injured appendage; the splints were also heavy, and there was a shortage of suitable metal for fabricating them. The Eameses were called to work on the problem by Wendell G. Scott, a fully trained medical doctor and lieutenant commander in the U.S. Navy Reserves. He was a friend of Charles Eames from St. Louis and had heard about his experiments with plywood.

The Eameses secured a contract with the U.S. Navy in November 1942 and set to work on producing splints in great numbers. They partnered with a giant U.S. company in the wood products industry, the Evans Products Company. Evans was able to provide limitless supplies of material, labor, and funding. They developed a molded-plywood splint that conformed to the shape of the human leg (Charles’s leg was used as the model, which was apparently an extremely painful process, since removing the cast ripped out all of his hair.). As their grandson Eames Demetrios notes in his guide to his grandparents’ legacy, the symmetrical holes in the splint relieved the stress of the bent plywood while giving the medic a place to thread bandages and wrappings.

The splint would go on to be a great success, and it is estimated that 150,000 may have been produced. Evans, in collaboration with Charles, also made many other wartime prototypes including a body litter, arm splint, pilot seat, and even plane flaps. Vintage splints today can sell for over $6,900 with the original box. Each of these splints bears an ink stamp with the words “Eames Process.” The biomorphic design of this plywood splint led to the development of the couple’s subsequent renowned plywood furniture designs, including the iconic lounge chair.