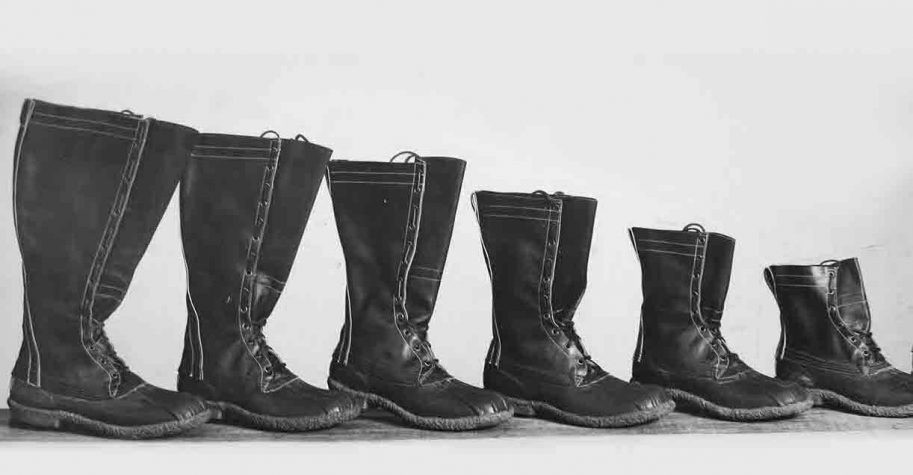 Leon Leonwood (“L.L.”) Bean often went moose hunting in the boggy Maine wilderness, and every time he did, he returned with soaked feet. Most of us can relate to the uncomfortable feeling of wet socks that compelled Bean to try out several types of boots, but in the end none of them kept his feet dry.

Bean’s solution? In 1911 he dug out an old pair of rubber galoshes and brought them to his local cobbler. He asked the cobbler to attach a leather ankle support to the foot of the galoshes. He called his invention the Maine Hunting Shoe. It was just the shoe a hunter needed: a sturdy, waterproof base with a light top support.

Bean was by no means a businessman, but he realized there was a strong need for his product, so he created a mailer. He found the names and addresses of Maine hunting license holders and sent his flyer to those residing out of state. He knew these would be his top customers, because they would need new supplies to tackle Maine’s terrain and climate. It wasn’t long before he sold his first 100 pairs.

Unfortunately for Bean, the first boots were not built to last: the leather and rubber components began to separate after only a few months. Ninety out of the first 100 customers sent their Maine Hunting Shoes back seeking a refund, which they all received. After this Bean borrowed $400 and traveled to Boston to meet with representatives of the United States Rubber Company, who supplied him with new bottoms. The new bottoms and better stitching would ensure that the improved model would not fall apart. Bean returned to Maine, manufactured the updated boots, and sent pairs to his pre-viously dissatisfied customers, free of charge. His reputation for making quality products was established. Well-made products that came with a money-back guarantee were rare in 1912.

Catalogs were printed, additional outdoor gear was designed, and soon “L.L.Bean” was synonymous with outdoor adventure. The L.L.Bean catalog started as a simple four-page flyer but quickly grew to a 51-page guide stuffed with clothing, shoes, sporting goods, and home furnishings. Bean tried all of the products himself to make sure they could stand up to a long day of hunting or fishing, often taking long lunch breaks to do so.

Bean’s small company in Freeport is now legendary. Celebrities such as Jack Dempsey, Babe Ruth, Franklin Roosevelt, John Wayne, and Ernest Hemingway all were ardent admirers of Bean boots. The boot’s design has remained constant: uppers made from premium full-grain leather treated with water-resistant protection that sheds rain and snow, triple stitched to a rubber, chain-tread bottom with a supportive steel shank. Before it is boxed, six to seven factory workers check each boot for quality insurance.

Today, Bean boots are still highly sought after and typically sell out before the winter season even starts. If you want a pair, you can order them to be shipped to your home or stop by the famous L.L.Bean outlet in Freeport. Bean boots are still made right here in Maine in Bean’s Brunswick and Lewiston factories. Each pair of these famed boots will eventually tell their own story.