The Opera House at Boothbay Harbor

Thanks to thoughtful restoration and an impressive concert schedule, the show goes on, and on, at this vibrant community venue 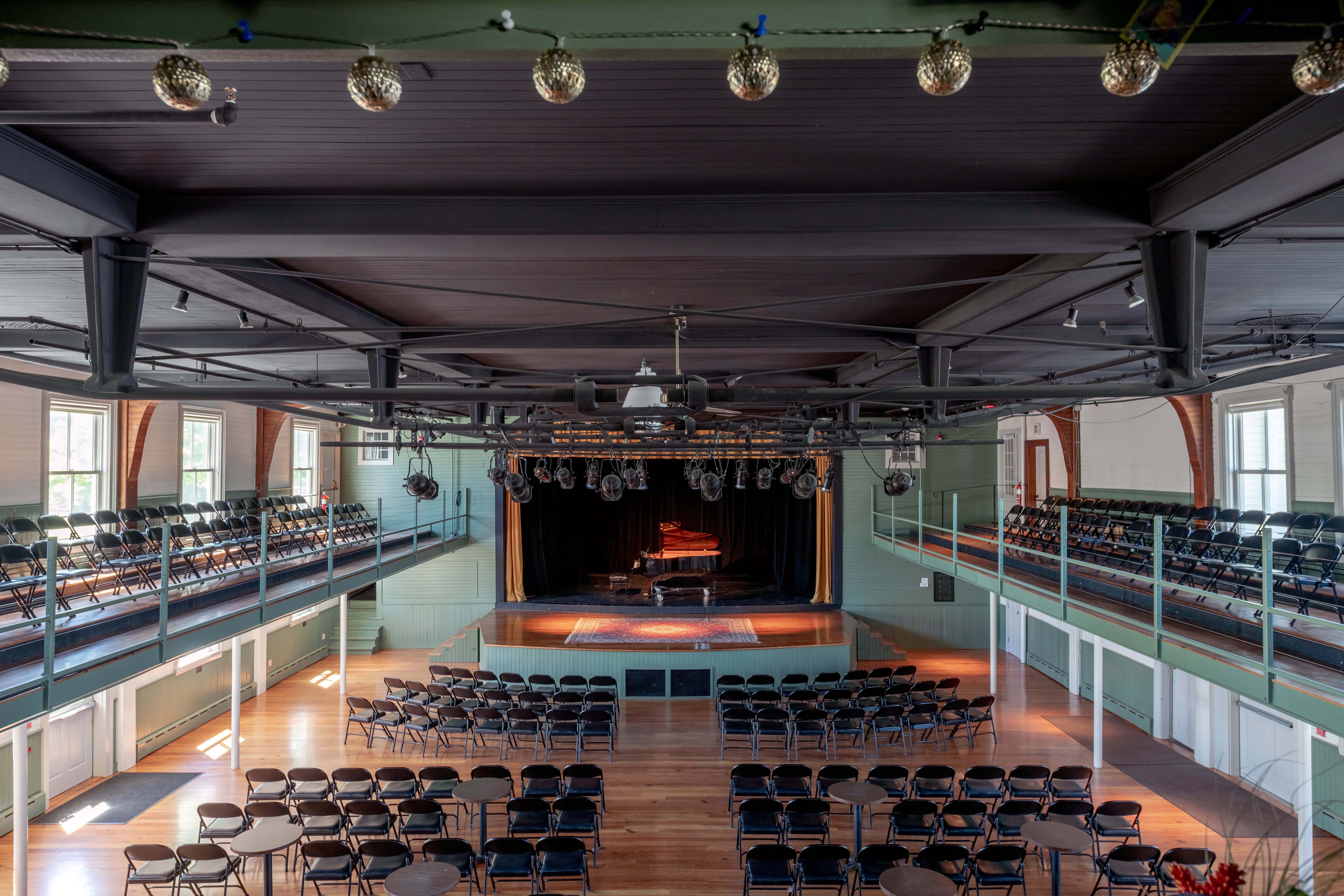 Over its history, the performance venue at the Opera House at Boothbay Harbor has been used for basketball, roller skating, wrestling matches, and as an antiques mini-mall. With the exception of a few nods to modernity, such as the lighting and the balcony’s cable railing, it has been carefully restored to look much the same as it did in 1894 when it was built. 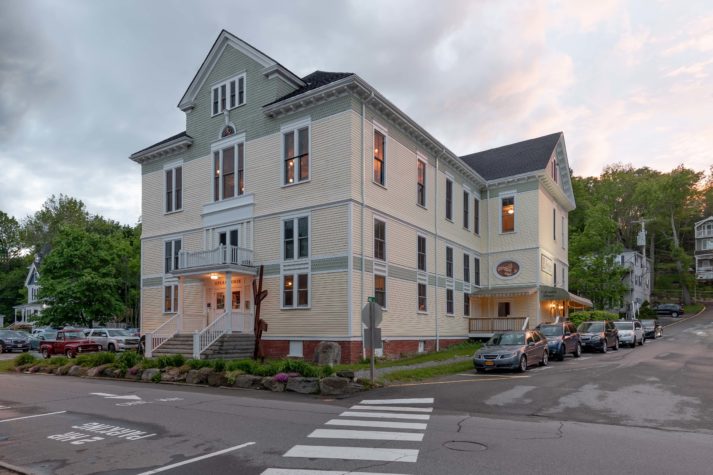 On the north end of Boothbay Harbor, the Opera House still has a commanding presence. The parking lot to the left was created after the movie theater that was there burned down in the 1970s. “I’ve been told by firemen in town that they knew the theater would be a total loss, so they stayed up all night and kept this building watered,” says executive director Cathy Sherrill. 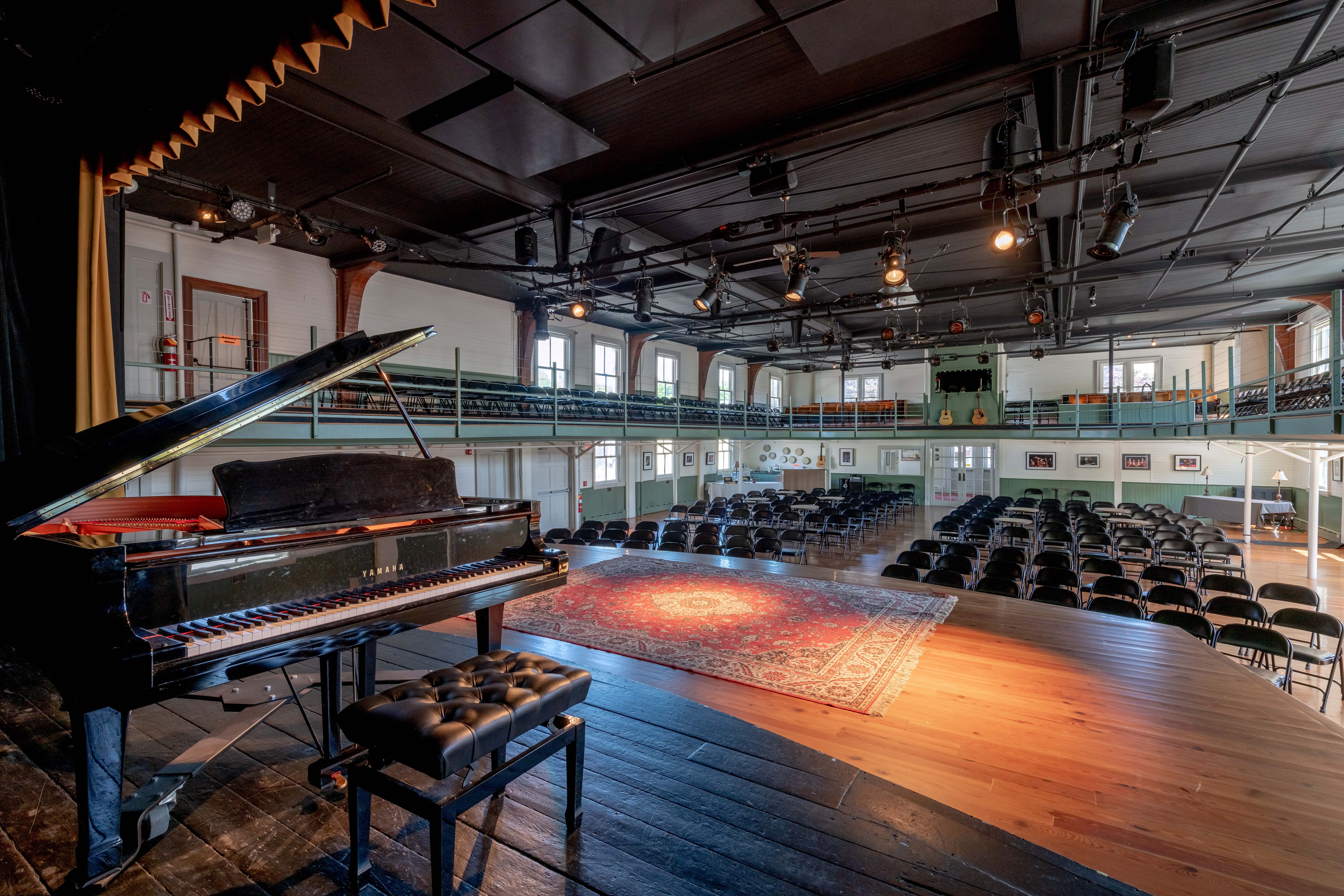 A performer’s view of the Opera House from the stage. The walls used to be dark-stained wood like the knee trusses in the balcony, but were painted to lighten the space. 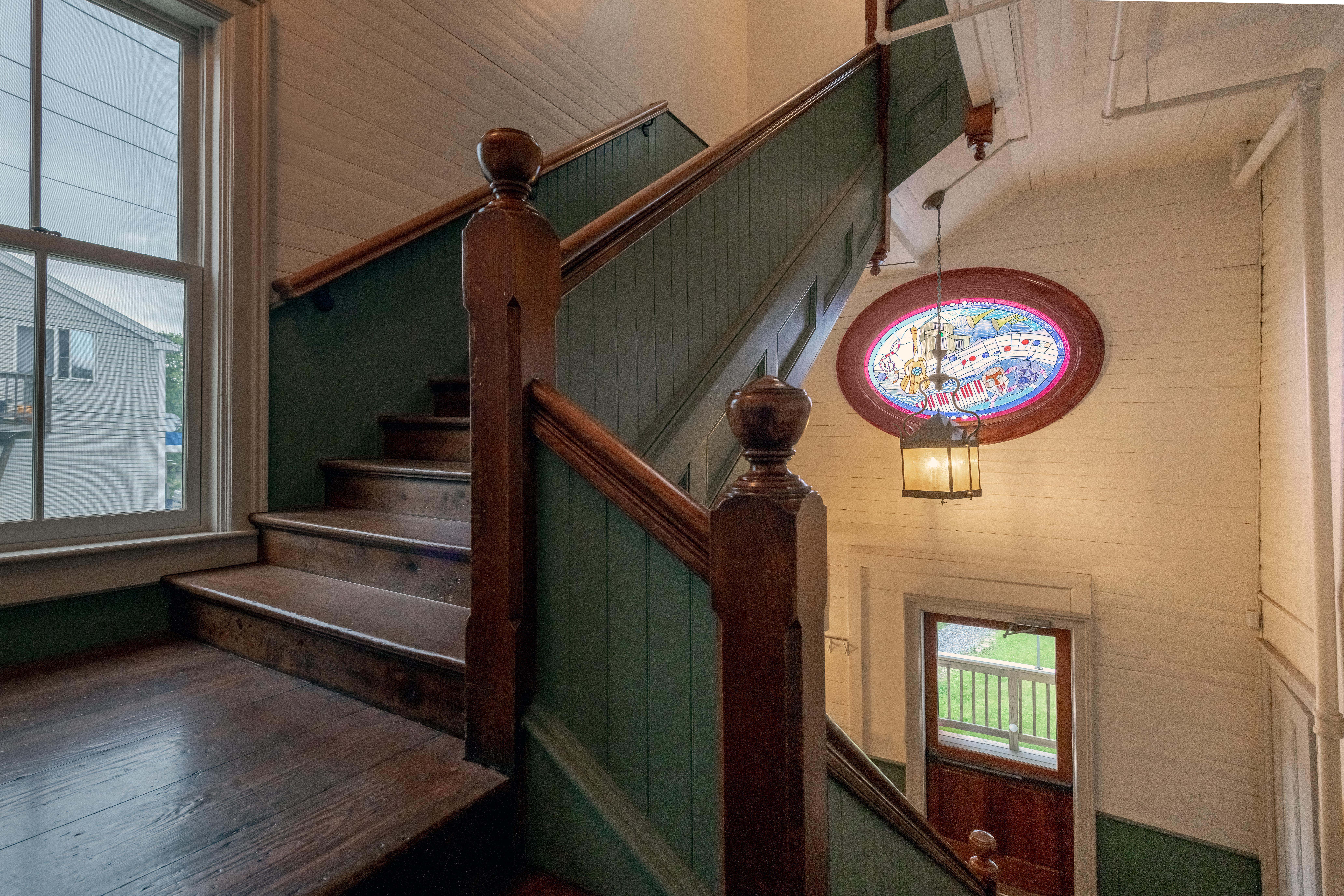 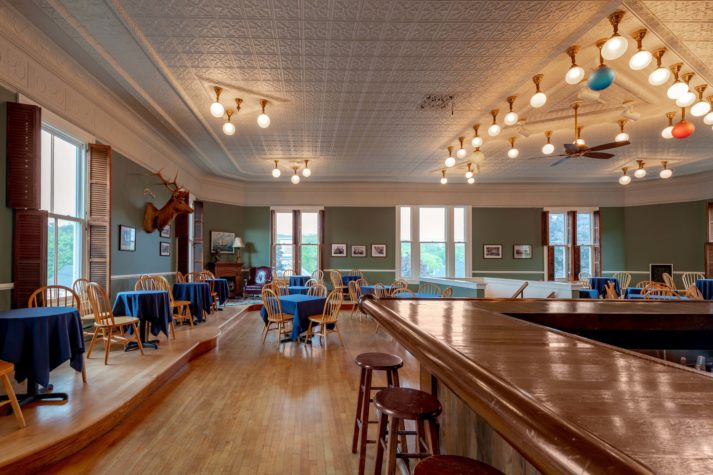 The secondfloor bar and lounge was once the Knights of Pythias meeting room. The ceiling lights date from that period.

The year 1894 ushered in an era of considerable change in America. While the impacts of the economic meltdown that began in 1893 were still being felt across much of the country, industrialism was booming, and thanks to the Progressive movement, many workers were obligated to work fewer hours and therefore had more leisure time. In Boothbay Harbor, the outlook that year was positive. Sardine and lobster canneries provided hundreds of new jobs, and summer “rusticators” arrived each season in droves to enjoy the cool Maine air on the porches of their cottages. It was in this forward-thinking environment that the local chapter of the Knights of Pythias engaged the prominent Portland architect Francis H. Fassett and his son, Edward F. Fassett, to design a meeting hall and multifunction space on Townsend Avenue, now known as the Opera House at Boothbay Harbor.

“It was a time of optimism in Boothbay Harbor, and the opera house was an indicator of both the town’s prosperity and the great expectations for its future,” wrote Boothbay region historian Barbara Rumsey in the July 8, 1999, edition of the Boothbay Register. Built in 70 days by local tradesmen, primarily shipbuilders, the three-story, Queen Anne–style Pythian Opera House dwarfed other local buildings in size and grandeur. The first-floor auditorium and balcony were leased to the town for meetings and cultural events, while the second floor housed two large meeting spaces for the Knights of Pythias and the Masons. The third floor was used for banquets and meetings of auxiliary groups such as the Order of the Eastern Star, the Masonic women’s auxiliary.

“There was a three-story outhouse cantilevered off the back,” says Cathy Sherrill, who has been the executive director of the Opera House at Boothbay Harbor since 2006. She knows every inch of this grand old place, having overseen the operation for much of its new life as a musical performance venue. Black-and-white photographs on the walls of the former Knights of Pythias Hall, now a bar and lounge used during concerts, offer glimpses of the opera house’s history: minstrel shows, musical theater productions, graduations, scout troop activities, kids on roller skates. From the 1960s into the early 1970s the YMCA occupied the building, using the auditorium for basketball, roller skating, and wrestling matches, and there were pool tables in the balcony. But by the mid-1970s the Opera House was largely empty, and in 1977 it was sold. Over the next two decades, the interior was chopped up into little shops that made up an antiques mall; it was also an inn, a restaurant, and a private home. “It was this giant place with peeling paint—impossible to be privately owned,” says Sherrill. When it came on the market again in 2001, some in the community thought it should be bulldozed and turned into a parking lot; others wanted to use the building for affordable housing. But a small group, including builder Steve Malcom of the Knickerbocker Group, recognized the historic value of the opera house and organized a plan to save it.

“It all started when Tony Heyl [owner of the Silver Lining jewelry shop in Boothbay Harbor] and I were serving on the building committee for the Boothbay Harbor Library at the same time the Opera House was going up for sale,” says Malcom. “We thought we could do something to combine the two entities,” relocating the library to the Opera House and reestablishing a performance venue. Ultimately, the library board cancelled the move, so Malcom and Heyl joined forces with the fledgling Friends of the Opera House. Local resident Bob Jones loaned the group $500,000, and Gardiner Savings Bank (now Camden National Bank) loaned them the rest of the $1 million purchase price. “We closed on it, and I shut all my job sites down and begged favors from all my subcontractors in the area,” says Malcom. “We tore all the guts out of it and put it back to what it is today.”

Once all the walls of the rabbit warren–like mini-mall and bed-and-breakfast were removed, the old auditorium was revealed. To show what could be done with the venue, Pulitzer Prize–winning author Richard Ford and his wife, Kristina Ford, who live in East Boothbay, got their friend Jackson Browne to perform for an inaugural concert in November 2003. “That was the very first show in the reincarnated Opera House, and there was quite a buzz,” says Sherrill. “After that concert there was the feeling of ‘We can do this.’” Malcom became president of the Opera House’s board of trustees, a position he held for 12 years. In 2006, a few months after Sherrill came on board, Richard Ford once again reached out to a well-known musician for a benefit concert. Mark Knopfler, former frontman for Dire Straits, played to a sold-out house that November, netting $200,000 that was used to leverage another bank loan and pay Bob Jones back. “That concert is what allowed the Opera House to burn the mortgage, and probably what allowed the organization to survive,” Sherrill says.

Following the Knopfler concert, the roof was replaced, a full sprinkler system was installed, and new Marvin windows and doors were put in. Ten years ago, a second round of work involved installing a new heating system, waterproofing the basement, adding insulation, and upgrading the electrical and sound systems. Malcom was initially worried that the insulation, which was blown in from the outside, would hurt the exceptional acoustics praised by both Browne and Knopfler, but was happily surprised when it had no impact. The balcony was reinforced, and reclaimed flooring from an old mill in Canada was laid in the balcony and on the main floor. “The floors look original and everybody loves them, but they were put down over the old floors that couldn’t be saved because they had been roller-skated on,” says Sherrill. Other projects included a new staircase so the performance venue could access the bar, and painting the formerly dark-stained beadboard walls white with sage green wainscoting. The stage was extended with a permanent platform called a thrust, but for the most part the opera house looks much as it did a century ago. One exception is the balcony’s cable railing, a nod to the modern world installed by a local sailboat rigger. “When people look at it, they don’t think anything’s been done, which is kind of nice, but then there are times when I think, ‘We spent hundreds of thousands of dollars and nobody’s noticing,’” says Sherrill. “That’s a tribute to the people who did the work.” In 2008 the Opera House at Boothbay Harbor was added to the National Register of Historic Places.

Now firmly established as the cultural hub of the community, the opera house hosts well-attended concerts and a smattering of other events year-round. “In the early days, it was mostly theater, but theater is expensive, and you have to do multi-week runs—in a small town you don’t have the audience,” says Sherrill. “Now it’s one night—load in, load out is what we do, and it keeps the community coming together.” The list of musicians she has hosted and continues to attract is impressive. Old Crow Medicine Show, Livingston Taylor, the BoDeans, Dickey Betts, and Kathy Mattea have all played there, and the upcoming lineup includes Darlingside, the Subdudes, and Marcia Ball. “People come from afar for these shows—routinely from Canada,” says Sherrill incredulously. “I don’t go to Canada to go to a concert, do you?” A particularly beloved annual event is the Gingerbread Spectacular and preview dance party, called the Dough Ball, in mid-December. The gingerbread creations by mostly local bakers (an Albany, New York baker has entered three times, and entries have been shipped from as far away as San Francisco) get more inventive every year. Prizes are awarded for “Most Spectacular” as well as “Most Obsessive Compulsive.”

In 2013 the Opera House was instrumental in Boothbay Harbor being recognized as one of “America’s Top 12 Small-Town ArtPlaces” by ArtPlace, a national collaborative dedicated to supporting communities through the arts. It stands proudly as an example of effective stewardship and dedication to not just preserving and honoring the past but carrying it forward. “It’s so iconic as a piece of architecture and as a venue,” says Malcom. “Restraint was the pathway we took right from day one, and we kept it that way. We’ve really been honest with its history and its legacy, and that’s what I’m most proud of.”