Art, culture, and inclusivity weave a rich tapestry at an historical synagogue 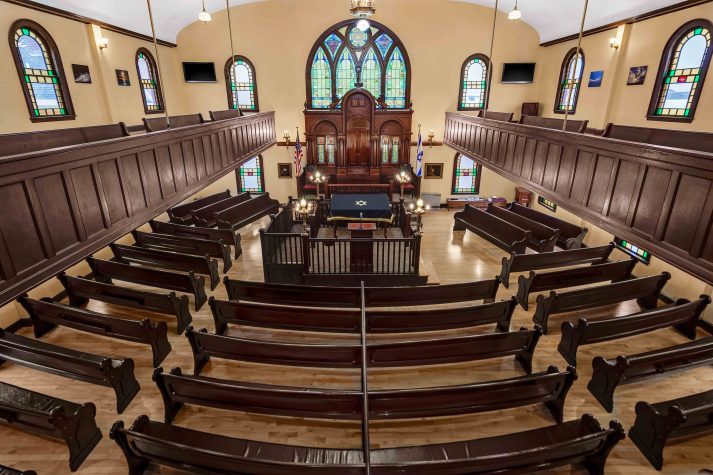 The Etz Chaim sanctuary was built in the early 1920s. As is traditional for orthodox synagogues, men and women did not sit together; male congregants originally occupied the pews on the ground floor, while women sat in the galleries above. Now, the inclusive synagogue is open to all, Jews and non-Jews alike. 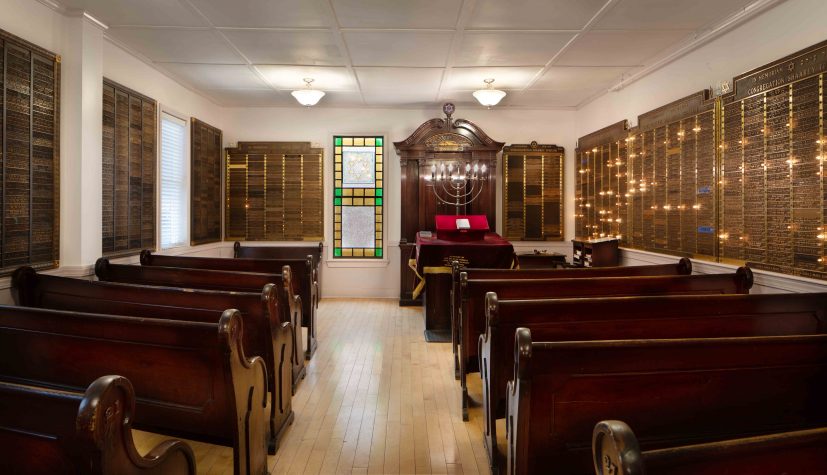 In the chapel, the walls are lined with memory boards from two other synagogues that used to be within walking distance of Etz Chaim. 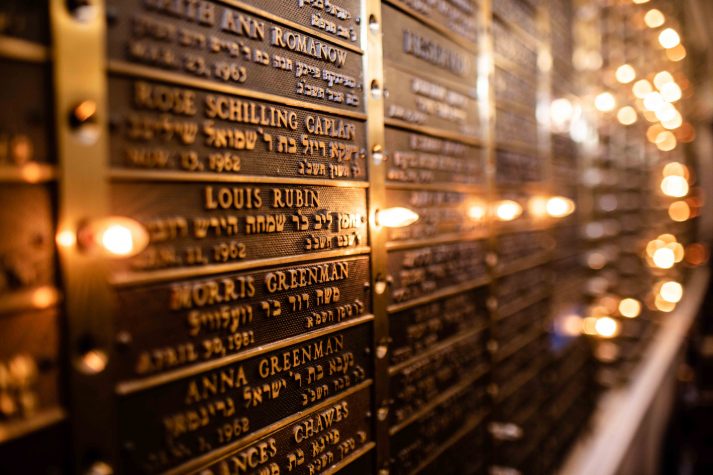 A detail of the memory boards lining the walls at Etz Chaim. 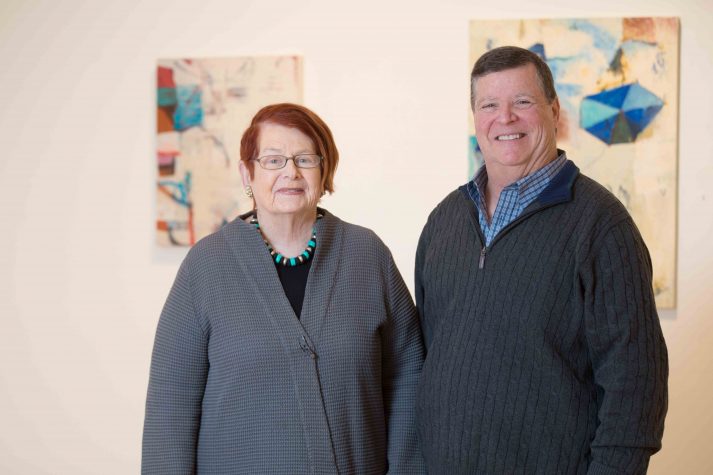 Shaarey Tphiloh was founded on Newbury Street and is now located on Deering Avenue. Anshe Sfard on Cumberland Avenue was torn down in 1983. Curator in residence Nancy Davidson and museum executive director Gary Barron in one of the galleries. 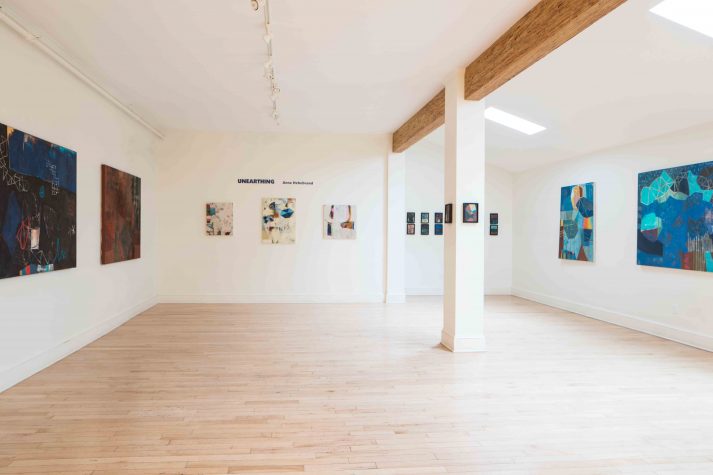 Art exhibits in the Fineberg Family Community Room on the first floor showcase the work of three contemporary Jewish artists with Maine connections and change every two months. From May 7 to June 27 the gallery will exhibit: Skowhegan Artists, curated by Juliet Karelsen; The Art of Mother/Daughter Artists Jane Sutherland and Alex Sax; and Taking a Leap, Meghan Nathanson.

In the early 1900s, Portland’s bustling India Street neighborhood had a large Jewish population and three orthodox synagogues within walking distance. “People used to call it ‘Little Jerusalem,’” says Nancy Davidson, who has deep roots in Portland (her family founded Day’s Jewelers) as well as in Judaism and modern art. She is the curator-in-residence at the Maine Jewish Museum, an art gallery and historical archive that operates in tandem with the last of those three congregations, Etz Chaim. In a restored brick building at 267 Congress Street, worship (inclusive and open to all), community, history, and modern art are woven together into a rich tapestry celebrating Jewish life in Maine. “We are two organizations that have the privilege of sharing the same footprint,” says the museum’s executive director, Gary Barron. “It’s impossible to come see the synagogue without walking through the museum and the gallery, and vice versa. We have two separate boards and leadership, but we each work collaboratively to help the other.”

Like the people whose worship it houses and whose culture it celebrates, Etz Chaim is a survivor. After much of the city was ravaged by fire on July 4, 1866, the local construction industry, including the builder of a six-unit apartment house at the top of India Street, turned to brick rather than the plentiful but flammable wood. The boxy, three-story structure first housed Irish dock and railroad workers, who were the first wave of immigrants to arrive in Portland, followed by Jews from Russia and eastern Europe escaping growing persecution in their home countries toward the end of the century.

In 1920 the apartment building was purchased by a group of Orthodox Jews to be converted into a synagogue, which they named Etz Chaim (“Tree of Life” in Hebrew) in honor of their rabbi, who had died not long after it opened in 1921. They added stained-glass windows, including the arched window with a Star of David that still dominates the facade, and created the worship space with its grand mahogany ark. The curved rows of pews on the main floor were reserved for men, while women sat in galleries overlooking them from the third floor. After World War II, Jewish families who wanted single-family homes and yards began moving off the peninsula to Deering, however, and by 1959 Etz Chaim was struggling to get even ten men for a minyan—the quorum required to hold religious services. The building started showing signs of disrepair, and in the 1970s access to the third floor was closed off by a suspended ceiling installed to conserve heat. The stained-glass windows were covered with brick to prevent more of the vandalism that had already resulted in breakages. “In those days it wasn’t such a good neighborhood,” says Rabbi Gary Berenson, who began leading services at Etz Chaim as a cantor in 1986 (he became a rabbi in 2014). Except for during High Holy Days, services were held in the synagogue’s small chapel.

In response to a small resurgence of congregants, in 2009 Rabbi Berenson and other leaders put together a plan to restore the building. For inspiration, they looked to two other historic congregations, Vilna Shul in Boston, which was founded in 1919, and Touro Synagogue in Newport, Rhode Island, the oldest synagogue in the country. Both are also Jewish cultural centers. “We decided to create a separate foundation to start a museum,” says Rabbi Berenson. A fundraising campaign began, which was bolstered by a $100,000 donation from the Glickman Foundation and by businessman Donald Sussman, who ultimately donated $400,000 to the project. Brick by brick, Etz Chaim’s stained-glass windows were uncovered and restored. The suspended ceiling was removed, revealing the original chandeliers and the galleries. “The electricity had been disconnected so the lights wouldn’t stay on all the time,” says Rabbi Berenson. “But when we reconnected it and flicked the switch, every single light bulb lit up.”

At about the same time, Rabbi Harry Sky, a revered leader in the Maine Jewish community who had retired after 30 years at Portland’s Temple Beth-El, was leading services in his home. He called this ad hoc congregation Jews Without Boundaries, and as participation grew Rabbi Sky found himself running out of room. He approached Rabbi Berenson about bringing his inclusive worship services to Etz Chaim. “He was an inspiration for me and was one of the reasons I went back to school to be a rabbi,” says Rabbi Berenson. Rabbi Sky eventually moved out of Maine, so Jews Without Boundaries was dismantled, but Etz Chaim’s charter was changed to make it similarly inclusive. “You don’t even have to be Jewish to be a member of our synagogue,” says Rabbi Berenson.

In 2013 Davidson walked through the door for the first time. “I had never seen this place because the front was covered with shrubs, and my family was a member of another congregation,” she says. “I was amazed.” She offered to volunteer for one year with the goal of demonstrating that exhibits of contemporary art by Jewish artists with a connection to Maine would benefit the museum. The exhibits, each of which showcases the work of three artists, change every eight weeks. Art is the first thing visitors see at the museum; some of the pieces are mounted on the walls of the entrance hallway, and others are in a gallery off to one side. On the second floor, near the main entrance to the sanctuary, a hall lined with memory boards chronicles the history of Jews in Maine.

A third-floor exhibit, Soul Survivors, is a breathtaking series of black-and-white photographs of Holocaust survivors who settled in Maine, each photo accompanied by the survivor’s testimony of their experience. The photos were taken and donated to the museum by Jack Montgomery, a retired attorney with the Portland law firm Bernstein Shur. The third level also includes an interactive video presentation of the inductees into the Maine Jewish Hall of Fame, inaugurated two years ago. “We have inducted some magnificent people who have made a significant difference in the lives of Mainers from long ago to today,” says Barron. They include Dorothy and Harold Alfond, the Osher family, and Louise Nevelson, among 23 other individuals, couples, and families. This fall, a new class will be inducted in a celebration that will lead into Etz Chaim’s centennial next year.

From their desks facing each other at the back of the chapel, Barron and Rabbi Berenson are working on plans for the centennial and hoping for an uptick in visitors to the museum, which now number about 18,000 a year. Because it is a short walk from the Old Port, many come from cruise ships. Others find it on TripAdvisor. “We are quite proud that, of the 135 activities that TripAdvisor lists to do in Portland, we are number 14,” says Barron. “We are open to everyone, and there is no entrance fee.” Similarly, no dues are charged for membership in the congregation, which has swelled to about 250 families. “The secret sauce to our success after the restoration was the announcement that it was egalitarian, whether you are Orthodox, Conservative, or Reform, or don’t even know what you are,” he says. “At Monday minyans, I see people sitting next to each other; one is Orthodox and one is as Reform as you can get. I think that says something about what we have accomplished here.” 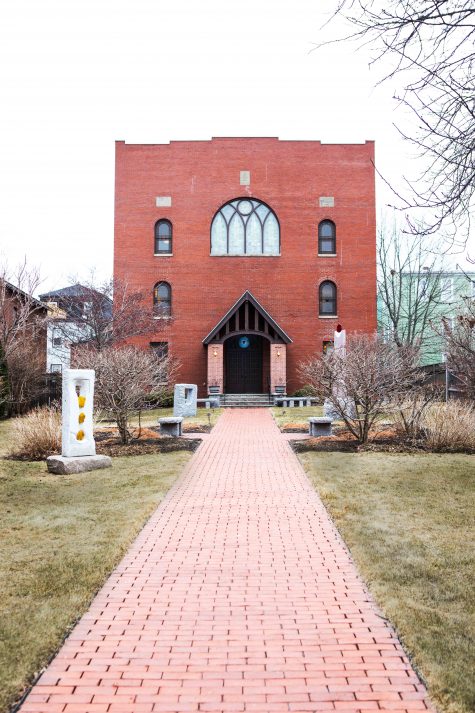 Restored 11 years ago, the Etz Chaim synagogue and the Maine Jewish Museum share a building at the top of India Street in Portland. The garden was donated by the Nelson family. 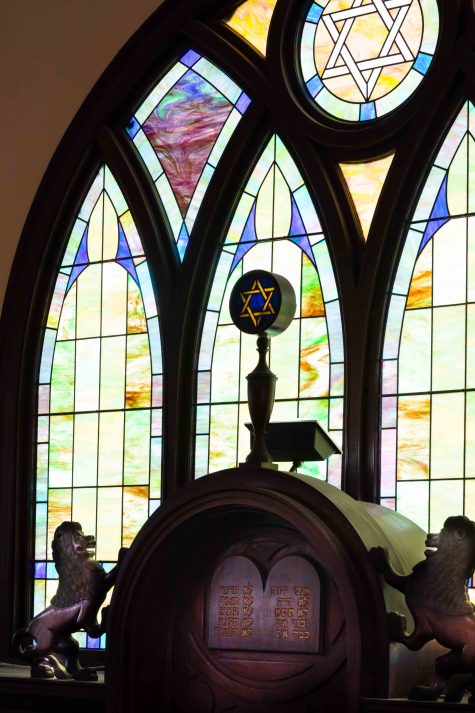 A detail of the mahogany ark, which holds the Torah.