Built by a beloved female industrialist, a lavish Queen Anne home lives on as a bed-and-breakfast 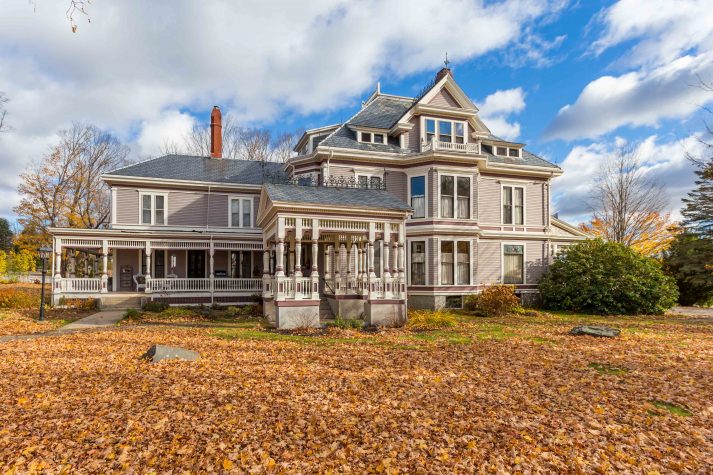 An ornate porte-cochere and wrap-around veranda give the owners’ portion of the bed-and-breakfast a private and spacious feel. The 85-inch windows on the first and second floors allow nature to interact seamlessly with the living space. 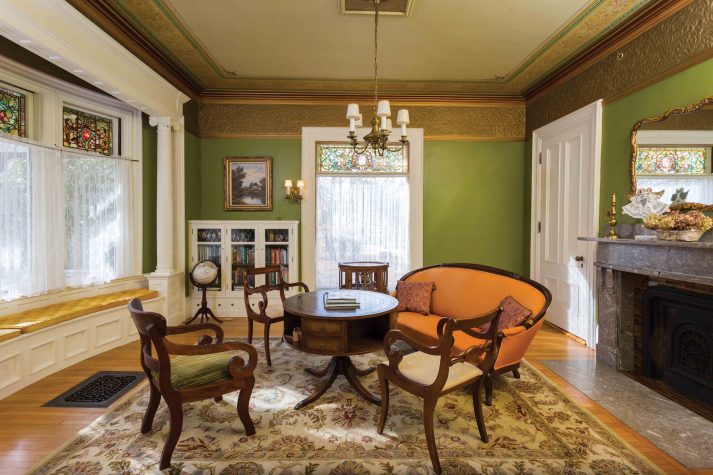 In the library, a massive bay window framed with classic columns has a hand-carved seat. The fireplace mantle is made from 450-million-year-old fossilized marble. 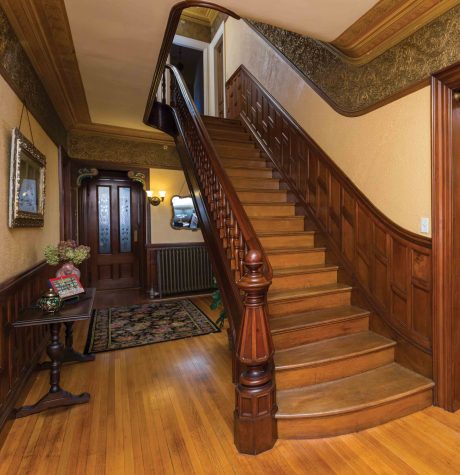 Black walnut woodwork gives warmth to the grand staircase in the entrance hall, which has boasts a gilded frieze and hand-stenciled ceiling. 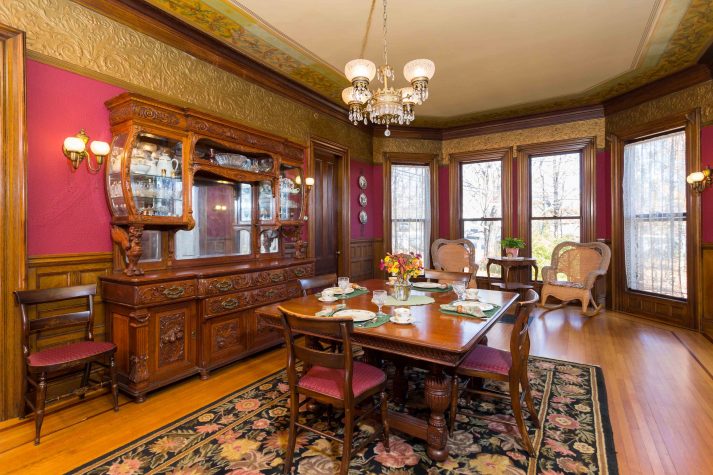 In the ornate dining room, the antique table seats 12 and the large breakfront came from the owners’ former bed-and-breakfast in New Hampshire. 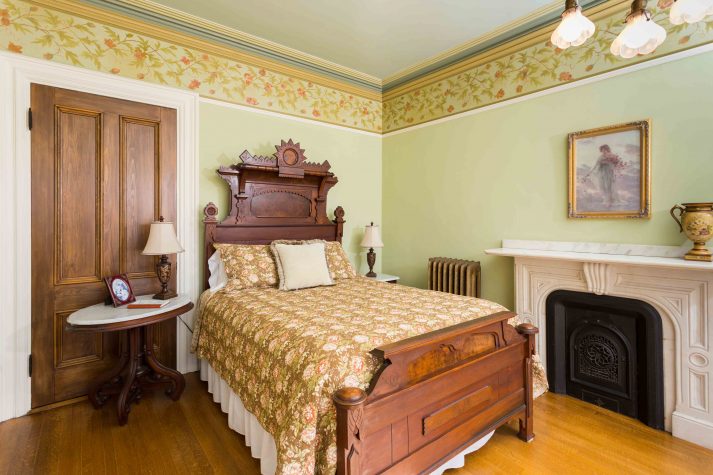 One of five guest bedrooms is furnished with a five-piece Eastlake bedroom set from England. A hand-stenciled frieze and marble fireplace add to the character and charm.

During America’s Gilded Age—loosely defined as extending from the 1870s to the Wall Street crash of 1929—industrialists put their wealth on public display by building grand and lavish homes. Some of them, such as the Breakers in Newport, Rhode Island, and the Biltmore in Asheville, North Carolina, mimicked the castles and country houses of their counterparts in Europe and Great Britain. But not every captain of industry had the bottomless pockets of a Rockefeller or a Vanderbilt. In small and midsized towns throughout New England, mill and factory owners built more modest yet still impressive homes, often in a variation of the quintessentially American Queen Anne style. One of these industrialists was a woman—North Berwick’s Mary Hurd.

Hurd Manor (which now operates as the Angel of the Berwicks bed-and-breakfast) was built in 1887 in the Queen Anne–Eastlake style, named for English architecture author Charles Eastlake and distinguished from the Queen Anne stick and shingle styles by its more elaborate ornamentation. In the nomination for the house to be listed on the National Historic Register, Maine historian Earle Shettleworth wrote that it “is the most outstanding example of its style in southern Maine and nowhere in the state does a more impressive Queen Anne–Eastlake residence exist in wood.” Painted in several shades of purpley mauve, trimmed in white, the exterior boasts hand-carved friezes depicting the faces of the north wind and the Roman god Bacchus decorating the porte cochere and broad front porch—which is supported by multiple turned and carved columns. Many of the rooms have wide, gilded plaster friezes and hand-painted designs on the 10-and-a-half-foot-high ceilings. The center hall features black walnut paneling and a stained-glass skylight. Tiny, prehistoric fossils are imbedded in the marble mantle of the library fireplace—one of eight in the house.

Sally McLaren and Ben Gumm bought Hurd Manor in 2004 and spent more than four years restoring it before opening Angel of the Berwicks in 2009. They were veteran innkeepers, having previously owned Angel of the Mountains in New Hampshire. (The “angel” name was inspired by Angel of the Sea, a bed-and-breakfast in Cape May, New Jersey.) They were also experienced renovators of older properties, but of the five homes the couple has restored, the 7,000-square-foot Hurd Manor is by far the largest. On the outside, it needed paint and the slate roof, topped with decorative iron cresting, had to be repaired, as did the three medieval-style chimneys. “On the inside it was in very good condition, but old, tired, and drab,” says McLaren. “All the original architectural details were there, but in terms of interior spaces and modern functionality—that wasn’t there.” In addition to updating wiring and plumbing, there was the requirement to install a sprinkler system—especially daunting due to the plaster walls and carved moldings. “How we were going to do this without ruining them was a huge concern for me,” says McLaren. “But we found a wonderful company to do it and now you can’t even tell.”

The Hurd Manor’s former owner, David Brooks, used the ground floor of the house for his law offices and rented out a few apartments he established on the second and third floors. Fortunately, Brooks, who was responsible for nominating the house for the historic register, knew its architectural value and all his improvements were easily removable. “Everything he did was with an eye to not damaging the building,” McLaren says. She and Gumm knew they wanted to create five guest rooms and suites, each with its own bathroom. They are appointed with a mix of antique and modern furniture, including a striking Queen Anne–Eastlake queen-sized bedroom set in one of the suites.

“The first floor is where Mary put all of her money,” says McLaren. Before they renovated the spacious and architecturally detailed common rooms, green shag carpeting covered all of the floors; fortunately, when they pulled it up, she and Gumm found that the hardwood underneath was in remarkably good shape. “The dining room had a mahogany ribbon inlay running the perimeter of the room that we couldn’t see until the floor was refinished,” she says. In the music room, which has a baby grand piano guests are welcome to play, the colors of the frieze were hidden under a “brown, gooey, glaze,” she continues. “I took some Comet spray and began wiping. It took me three days to do it, but I uncovered this gorgeous painted frieze—the biggest problem was to be gentle so I didn’t crumble the plaster.” The first floor also includes the couple’s private living space with a commodious kitchen McLaren designed, incorporating the home’s original butler’s pantry. “It leads to a back veranda overlooking a kitchen garden—my happy place,” she says.

The butler’s pantry still houses Mary Hurd’s safe, a household item not uncommon for wealthy industrialists of her era, but uncommon for a woman to own and use. In 1871, 48 years before women were given the right to vote, Mary took over the North Berwick Woolen Mill after her father died, and in the years that followed, she not only put her personal stamp on her grand home, she also left an indelible imprint on her town. She founded the North Berwick Bank, funded the construction of the community’s firehouse, and endowed its library, named for her second husband, Daniel Hurd, whom she had been in love with as a young woman.

“Her father, a Quaker, didn’t approve and arranged a marriage for Mary to one of the officers of the mill, a widower with two small children,” says McLaren. “He died and then her father died, and lo and behold Dan Hurd was still unmarried.” Mary moved the modest house her father gave her and her first husband as a wedding present to the back of the property and commissioned the construction of the Queen Anne mansion, with the original house as servants’ quarters. She married Daniel Hurd in 1893 and they lived happily in adjoining rooms until his death in 1931. She continued to run the mill until shortly before her own death two years later, at age 94.

In stark contrast to the “robber barons” of the Gilded Age, who amassed their fortunes at the expense of their workers, Mary was a beloved benefactor. During the early years of the Great Depression she kept the mill operating, even paying the payroll out of her own pocket. Her gracious and welcoming home stands as the legacy of this extraordinary Maine woman’s business acumen, kindness, and good cheer. “If you needed something and you came to Mary,” McLaren says, “chances are it was going to happen.” 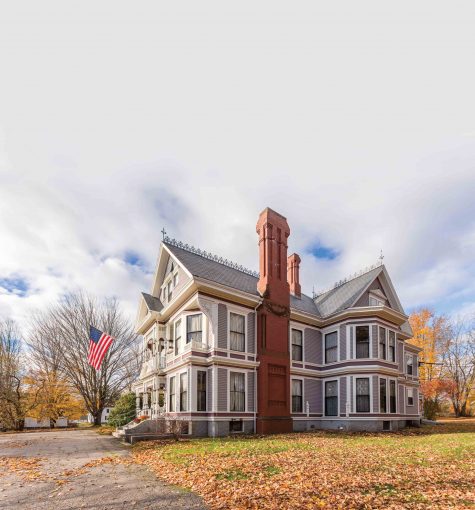 Now a bed-and-breakfast known as Angel of the Berwicks, Hurd Manor is a prominent landmark in North Berwick. Built in the Queen Anne–Eastlake style, its exterior details include a 60-foot chimney with a herringbone brick design, Grecian columns, and a Doric sash. The roof peaks feature iron cresting to prevent damage from lightning strikes.