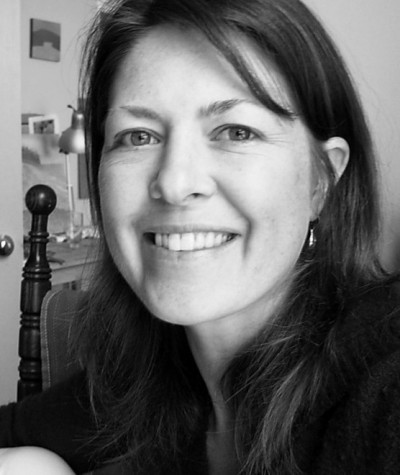 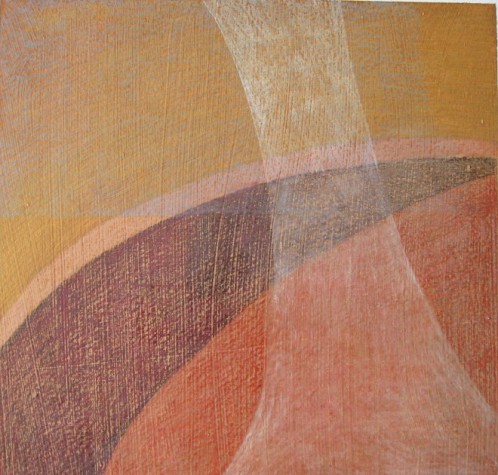 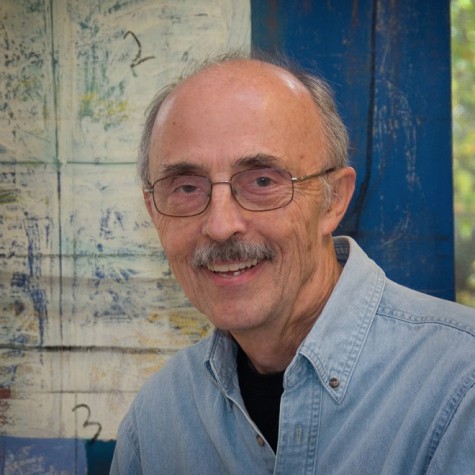 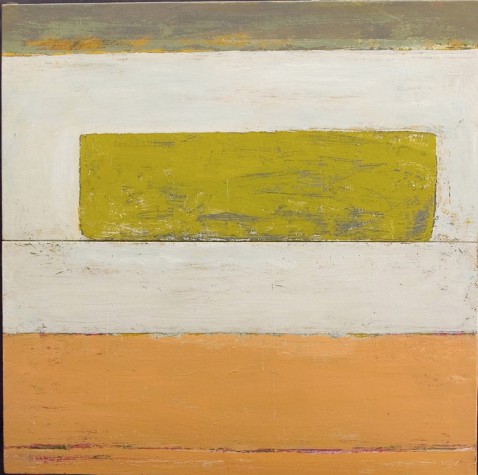 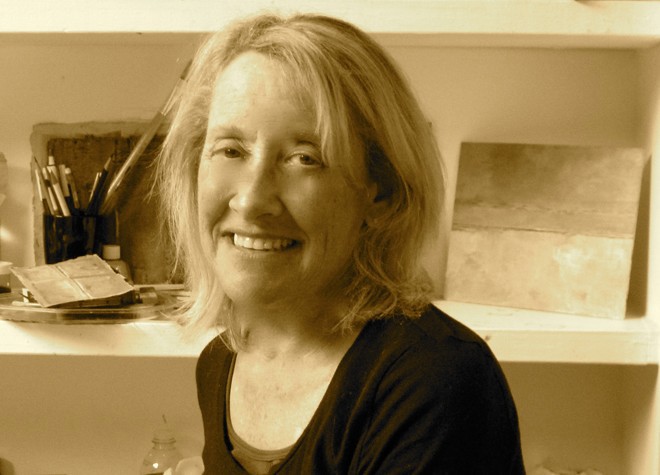 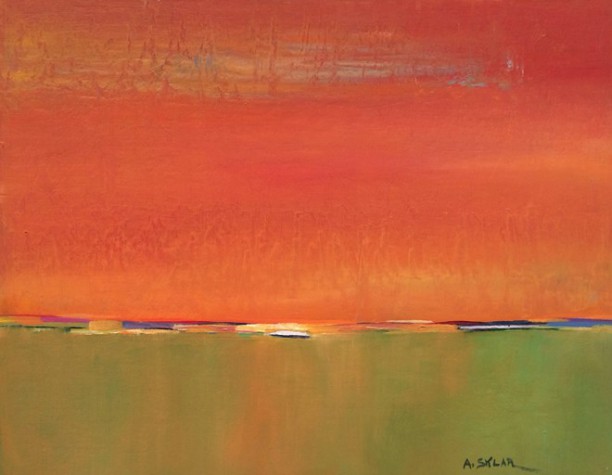 THE CANVAS – February 2014
By Britta Konau

Painters Nancy Desmond Brown, Tom Gaines, and Ann Sklar draw on nature for inspiration. The artists simplify and abstract its basic colors and forms to such a degree that their images become organic evocations of universal landscapes rather than particular views.

Her mother being a Mainer, Nancy Desmond Brown’s family moved here from Bozeman, Montana, when she was three years old. Brown studied art at the University of Montana in Missoula and received a master of arts in K-12 art education from the University of New Hampshire in Durham. She has been an elementary art teacher for the past six years and has participated in group shows in Maine, New Hampshire, and Canada.

Working in her flower and vegetable gardens and taking daily walks along the Maine coast supply Brown with inspiration and physical material as well. Looking for colors, forms, textures, and patterns, “each of my pieces begins as a representation of a particular place or element, and then I transform it into an artwork focused on color and shape relations,” she explains.

Brown is a painter, printmaker, and collage artist, whose varied approaches match her range of subjects. From linear representations of mussels and jellyfish and playful geometric paper collages to sophisticated still lifes and abstract paintings, Brown’s interest is broad and experimental. “When teaching art you introduce a variety of materials,” she explains, “and that keeps my own work fresh, but I always tend to go back to painting, which is the most immediate medium for me.”

Working mostly on a small scale, Brown simplifies her nature-inspired compositions “to the point that they become an idea rather than a landscape.” Shapes 2 is from a series of paintings inspired by the physical relationship between a Mount Desert Island sound and the mountains surrounding it. “I abstracted it to something flowing through the center of two semicircles,” says the artist, “to movement and solidity.” In Shape 2 arcs of solid color are overlaid with veils of white, creating a dynamic tension between these layers. The painting is a perfect example of the importance of color relationships in supplying much of the visual interest and content in Brown’s paintings. The artist also likes “to make people think of what is outside the boundaries of the image.” The shapes the colors take thus create a fluidity that extends beyond the picture itself, suggesting a snapshot of a larger configuration.

Born in Portland, Oregon, Tom Gaines studied art at the School of Visual Arts in New York and at the University of California–San Diego in La Jolla. He has had solo shows at galleries in New York, Philadelphia, and Wells, and was included in 2013 EARTH: Annual Open Call Show at Waterfall Arts in Belfast. Gaines’s work is in the Delaware Art Museum and many corporate and private collections. For many years he was a teacher and chair of the art department at Centre College in Danville, Kentucky. Gaines now divides his time between New Jersey and Belfast. The Corey Daniels Gallery in Wells and Susan Eley Fine Art in New York represent his work.

Coming to Maine changed Gaines’s artistic outlook dramatically. His earlier representational paintings of interiors, flowers, and people showed the influence of Pierre Bonnard’s (1867–1947) highly patterned domestic scenes. Gaines increasingly removed details from his paintings, literally painting them out again, because “subject matter was getting in the way.” Extreme simplification and the room itself became more and more interesting to him. “My goal was to concentrate on the paintings’ surface alone,” Gaines says.

In 2005 the artist completed the switch to abstraction with his ongoing Rock series, which is inspired by the sky, sea, sand, and rock found in abundance in Maine. Irregularly shaped forms, alone or in groups, are set against several boldly colored horizontal zones that reference essential landscape elements. The central rocks retain a figurative and psychological aspect in their specific groupings, leaning into or dominating each other, as if enacting relationships.

While Gaines initially made sketches of rocks, he is now “working from rocks in my head,” as he describes it. For their arrangements he refers to a large stack of compositional sketches. After a layer of paint has dried, Gaines uses an electric buffer and cleaning pads to grind it down and partially washes it away with solvent and water. He thinks of this process as erosion and appreciates the chance it entails. “In this way any firm edge will become more organic and alive,” the artist explains, “and sometimes ghosts of former shapes will remain.”

The title of Rock 131: Peridot refers to the color of its central shape, peridot being a green mineral of gem quality. The three background bands of color reference sand, sky, and another narrow expanse of sky, according to the artist, with the horizontal orientation of the rectangle echoing their orientation. This shape is resting on the small physical gap between the two canvases that constitute this painting. Figuratively speaking, it thus rests on painted and real air, a paradox Gaines thoroughly enjoys. Seen from afar, the general scheme of Peridot seems straightforward, yet closer looking reveals subtle coloristic underlayers and variations that engender intimacy. Gaines muses, “This viewing process is similar to coming closer to a person and realizing his or her nuances of personality.”

A Philadelphia native, Ann Sklar studied art at the city’s Temple University and at Beaver College (now Arcadia University) in Glenside, Pennsylvania. She also learned jewelry design at the Fashion Institute of Technology in New York. Sklar co-owned and cofounded two galleries in Philadelphia, one specializing in contemporary American craft, the other a women’s cooperative. Since 2005 the artist has divided her time between Florida and Maine, showing her work extensively in both states. Sklar has been selected to show her work at the Stable Gallery in Damariscotta and is represented by the Gallery at the Grand in Kennebunk and the Gallery at Somes Sound in Somesville.

For Sklar, “Painting is an expression of my connection to both the visual world and my own inner world.” Her early, ultra-realist paintings were close-ups of knotty wood, coils of rope, and rusted pipes and metal shelves. Leaving detailed description behind, the artist remains interested in texture, color, and geometry in her newer landscapes, still lifes, and abstractions. “I play with the colors and forms until they work together,” she states.

Before starting a new painting, Sklar spends a long time looking at her own photographs of landscape formations and rusty objects, like old fenders, which she considers an intrinsically Maine subject. Sklar then puts the images away and lets memory and intuition guide her in creating universal rather than particular landscape views. The color schemes of some of her panels and canvases are surprisingly warm, others decidedly cool—aesthetic choices the artist makes subconsciously. With thin glazes of paint layered to achieve luminosity and depth, a painting may change considerably over the several weeks it takes the artist to finish it. It may even change its orientation.

This can be detected in the upper half of Sounds of Summer by the drips of paint running upward. In contrast to this orange, hot sky, the reflective expanse of water below appears green and cool. Separating these two fields of color is a busy band of multicolored marks that may suggest a cluster of islands on the horizon. “I think of this painting as maybe a little noisy,” Sklar says in reference to the work’s title, “and I want there to be enough visual interest so that one can always discover something new.” Painting is for Sklar a very peaceful experience, and she aims to share this feeling through her paintings. Although relatively small, their horizons seem infinite, expanding beyond the edges. “I like to create a feeling of limitlessness and mystery,” the artist explains.