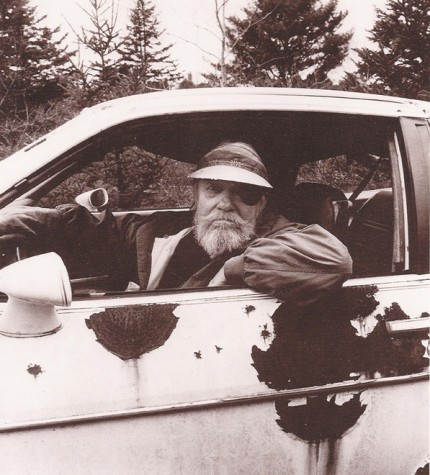 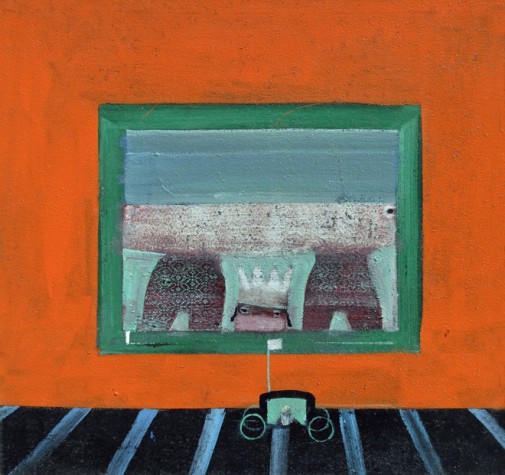 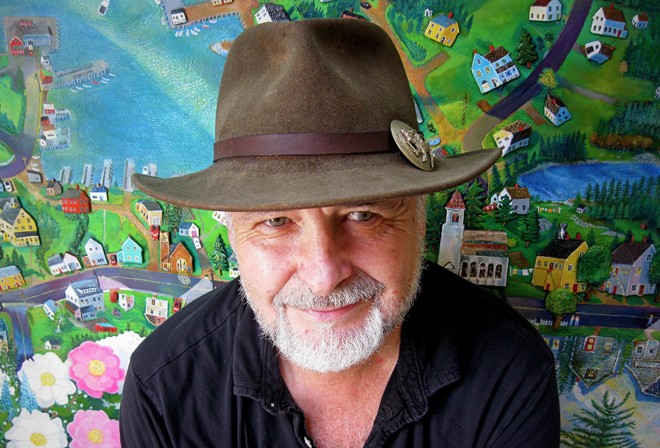 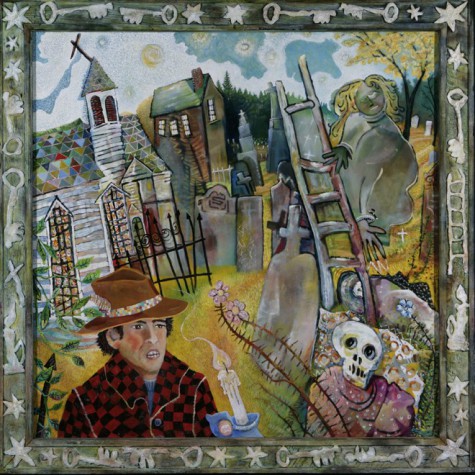 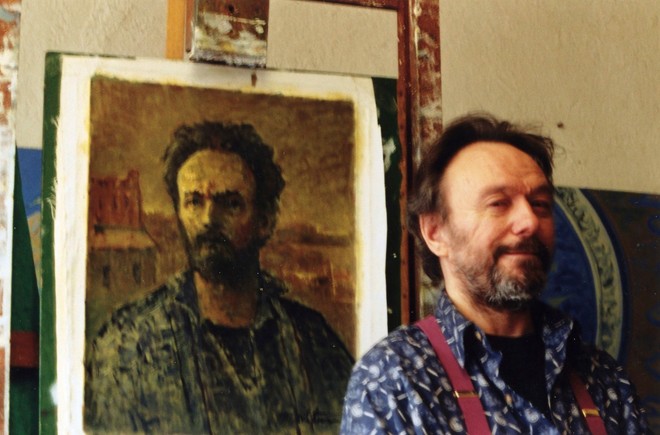 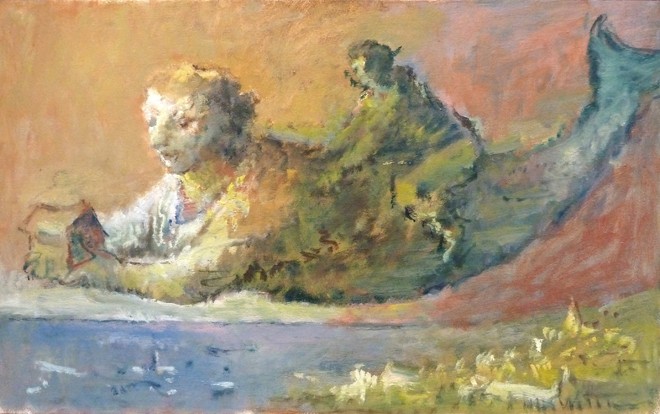 THE CANVAS – October 2013
By Britta Konau

Artists Robert Hamilton, Charles Wilder Oakes, and Michael Waterman can rightfully be called visionary for the idiosyncratic style and subject matter of their paintings. They seem to see the world differently—in a way deeply informed by their interior lives. Some of the artists’ images may amuse us, others bewilder us, still others may remain incomprehensible, yet they are always highly intriguing.

Born in Seneca Falls, New York, Hamilton attended the Rhode Island School of Design (RISD). During World War II he flew 100 missions, an experience obliquely alluded to in many of his paintings. After the war, Hamilton taught at RISD for over 30 years with students including Yvonne Jacquette, George Lloyd, Eric Hopkins, and David Estey. Upon retirement Hamilton moved permanently to Port Clyde, where the family had had a summer house since 1957. In 1974 Hamilton was awarded a residency at the American Academy in Rome, and in 1997 he received grants from the Adolph and Esther Gottlieb Foundation and the Pollock-Krasner Foundation. He has had solo exhibitions at the Farnsworth Art Museum, Rhode Island School of Design Museum, and the deCordova Sculpture Park and Museum. Hamilton is also the subject of a documentary in the Maine Masters film series, featuring some of the state’s most distinguished artists. His paintings are in the Farnsworth Art Museum, Rhode Island School of Design Museum, and deCordova Sculpture Park and Museum, among others. Hamilton’s widow continues the tradition of organizing annual shows of his work in self-built galleries in Port Clyde, and Greenhut Galleries represents him in Portland.

Robert Hamilton is considered a genius by some for his highly imaginative and idiosyncratic imagery. Not unlike a theatrical director or magician, he conjured a world of fantasy, memories, and dreams, inhabited by denizens who seem real enough after all. Hamilton’s simple brushstrokes call forth animals, performers, shady characters wearing odd headpieces, striped balloons and balls, and vehicles of all sorts, including circus wagons and flying bombers.

Relatively uncomplicated compositions are enlivened by mysterious jumps in scale, stage-like spaces complete with proscenium curtains, pictures within pictures, and multiple scenes set in a grid of lines. This latter formal device reveals one of Hamilton’s early artistic influences: comic strips, especially Krazy Kat, whose complex sensibility chimed with his own. Growing up, Hamilton copied illustrations in the Saturday Evening Post, thinking he’d become an illustrator like Norman Rockwell.

Irreverent humor and a touching quirkiness are endearing features of Hamilton’s creations. Within the interior space of The Little King, more questions arise than answers can be found. Is the green rectangle meant to frame another painting, or is it a window? What happened to the rest of the lacy bodies within it? From where is the dreamy king observing us? Is he also in the diminutive carriage brandishing a white banner of peace? Hamilton’s stories remain fascinating suggestions, and the artist did not help viewers much to make sense out of them. “The picture makes itself,” he once explained. “When I’m finished, I don’t know how the hell I did it.”

Hamilton also created complex line drawings of lively scenes full of narrative detail and surprise reminiscent of the German artist Otto Dix (1891–1969) in their acerbic humor as well as style. The paintings of another German, Max Beckmann (1884–1950), were indeed a major influence on Hamilton, but so was improvisational jazz. “From them [my jazz heroes] I knew my paintings had to be improvised, spontaneous …one thing leading to another, … a series of metamorphoses, surprised arrivals,” the artist explained.

Charles Wilder Oakes
Born in Rockland, Charles Wilder Oakes grew up in Port Clyde and draws inspiration for his art from living in the fishing village. While he has had some training in art, Oakes prefers to ignore the lessons taught. Over the years he has had solo shows at the University of Maine at Augusta, the Portland Public Library, and many commercial galleries, including Fahey. Bodell (now Umbrella Arts) in New York, the Mars Hall Gallery in Tenants Harbor, and the Gallery by the Sea in Port Clyde. His most recent solo show was last year at Asymmetrick Arts in Rockland. Oakes has also participated in group shows throughout Maine and his work was featured at art fairs in New York and Washington, D.C. Maine Sunday Telegram and Down East magazine have published articles on him and he is the subject of a short documentary, Charles Wilder Oakes and the Muses of Port Clyde.

All of Charles Wilder Oakes’s art is about himself—his life history, experiences, visions, struggles, and triumphs. However, the artist does not lay himself bare in his autobiographical work but rather delights in telling stories that are deeply meaningful to him although as viewers we may only surmise some of their significance.

As a toddler Oakes saw an angel who, as he describes it, imbued him with consciousness. The artist still feels guided by her and depicts her in various incarnations in his paintings, often blending her image with that of the loves in his life. Just as we all periodically revisit events in our lives through recollection, understanding and rewriting them in the process, it can take Oakes many years to finalize a painting and through it create a public version of his history. While working on and transforming a piece, he creates extensive notes, and consults collections of photographs and background materials, all kept in large ring binders.

Oakes’s paintings are colorful and animated, featuring a wealth of descriptive detail in shallow pictorial spaces. In a simultaneity of time, place, and history, several narratives and time frames are combined into complex compositions of sometimes panoramic and epic proportions. The 4-by-8-foot The Lovers over Port Clyde, for instance, took Oakes 20 years of intermittent work. In such complicated paintings every little detail is significant, including the frames which Oakes sometimes carves or decorates with material relating to the image. The viewer’s captured attention follows in the artist’s footsteps, retracing his life, dreams, nightmares, and visions. In Spirit Lamp, the youngish artist is guided through a dark and gloomy cemetery by a candle inscribed with the title of the work. All the while, a rather cheerless version of the angel is watching over him from a ladder. When Oakes started this painting in 1979, he was thinking, “this is coming from the future,” and indeed, it took a journey from alcoholism to sobriety, a lifetime in itself, to complete it. For Oakes, both life and art have lately become affirmative statements of belief in the significance of spiritual guidance.

Michael Waterman
Michael Waterman was born in Portland, has lived there most of his life, and has made it the predominant subject of his work. Encouraged by his painter father, Waterman had solo and group shows, created a large commissioned mural, and won several awards before he even finished high school. He received scholarships to attend sessions at the Pratt Institute and Art Students League, both in New York. In 1988 Waterman had a retrospective at what was then the University of Southern Maine Art Gallery. Waterman is represented by Harbor Square Gallery in Rockland and Aucocisco Galleries in Portland. His drawings are also shown at the June Fitzpatrick Gallery in Portland.

Enigmatic is probably the best word to describe Michael Waterman’s images. Working in a manner reminiscent of 1930s American realism in style and overt subject matter, his fantastical allegories and religious narratives have a strong surrealist undertone: a woman looms large over the surrounding landscape as she plays the violin in duet with a bird, a gargantuan mermaid is caught spying with binoculars in hand, another is being retrieved from the sea by a love-smitten fisherman, and Christ carries the cross through Portland’s streets. Waterman also creates paintings of couples walking down the street, people waiting at a ferry terminal, and others just going about their business.

While Portland and its coast and lighthouses are the stage for these dramas of ordinary and extraordinary life, in most cases it remains unidentifiable. And while much of the symbolism of Waterman’s work is quietly personal, it also appeals to common emotions and experiences. When describing a particularly eye-opening incident observing people in their surroundings Waterman states: “The implications of their inter-relationships became an endless source for my imagination.”

Main features in Waterman’s paintings are delineated with dark outlines, but instead of additional detailed descriptions, layers of feathery brush strokes build up the images in warm and muted colors. In Look Homeward Angel, a huge mermaid cum angel crosses the sky above a town’s coast line. Not only does he or she give a ride to a much smaller human being, she also cradles a small house in her hands. It is a dreamy scene of longing and caring—of the possibility of going home after all. In Waterman’s vision, the line between believable reality and fantasy is nonexistent. Suspended in a sense of timeless storytelling, all seems the same, equally real and deserving the same attention.