Not the Bookish Kind 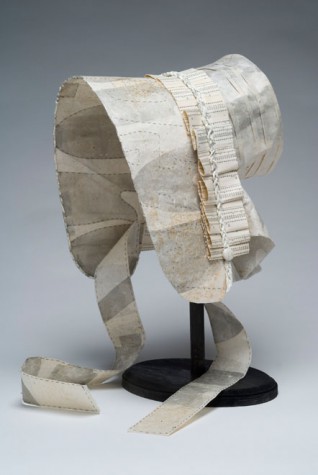 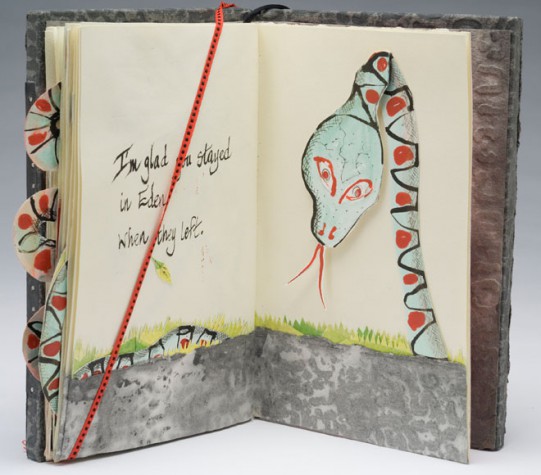 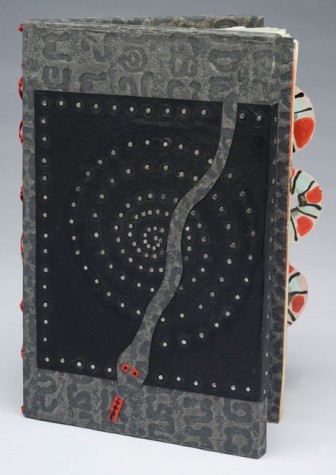 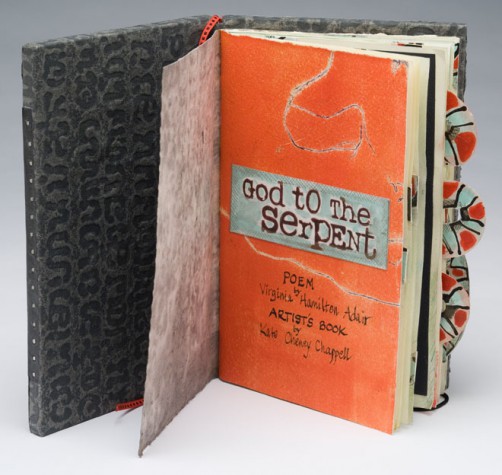 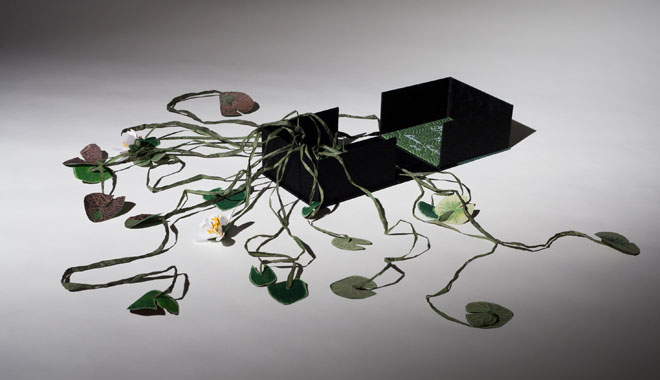 The work of Crystal Cawley, Kate Cheney Chappell, and Rebecca Goodale show that artists’ books often transcend the traditional codex, becoming quite sculptural while still retaining the uses of elements of the book.

What we generally refer to now as artists’ books are part of a long tradition of combining or replacing text with images, starting with medieval illuminated manuscripts. The genre takes forms as varied as its many names, which include book art, bookworks, and book objects. Artists’ books often incorporate a multitude of techniques, from printmaking and painting to photography and digital image manipulation, but any successful work is characterized by a compelling alignment of form and content. While many artists’ books do not include text, they often ask for other forms of physical interaction, such as turning pages or arranging other flexible components. As the selection of works by Crystal Cawley, Kate Cheney Chappell, and Rebecca Goodale shows, artists’ books often transcend the traditional codex and can become quite sculptural while still retaining the uses of elements of the book.

Crystal Cawley received a grant from the Pollock-Krasner Foundation in New York in 2005 and two Good Idea Grants from the Maine Arts Commission (2004 and 2010). She has given presentations on her work and participated in roundtable discussions throughout Maine and frequently teaches book arts workshops at Wolfe Editions in Portland. Cawley’s work has been included in group shows nationally, as well as in Greece and England, and has been collected by the Center for Book Arts in New York, the Rare Book and Special Collections Division at the Library of Congress, the Barbara Cash Collection of Artists’ Books at the Portland Museum of Art, and the Graphic Arts Collection of the National Museum of American History in Washington, D.C., among other institutions. She will be in a two-person show at the Center for Maine Contemporary Art from May 25 to July 7.

Cawley’s work inhabits the intersection of artists’ books, printmaking, sculpture, and textile work, “but these strands don’t feel that different to me,” she says. They all share similar starting points in preexisting objects or materials that already bear markings of their history, sometimes including their past lives as earlier creations by the artist. She explains: “Responding to something given is not the focus of the work but an important ingredient, as something to start from or fight against.” Cawley has thus created embroidered adult-size baby booties made from vintage tablecloths and a dress built of overlapping disks cut from old greeting cards. Some of her sculpture is more book-related and uses the structure and components of books such as the covers, spine, and pages or entire text block.

Writing, or rather lettering, turns up in most of Cawley’s work. It is not always legible or coherent.

It can be found or newly created, and thus introduces an element of time and mystery. Cawley also likes language’s purely visual pattern, which is on prominent display in her ongoing series Thinking Cap, of which Thinking Cap 3 (Math Bonnet for Ada Lovelace) is a part. Ada Lovelace (1815–1852) was an English mathematician who wrote the first algorithm to be processed by a machine, an early example of what became computer programming. Cawley’s homage is shaped and sized like a woman’s bonnet from the 1840s and incorporates pages from a mathematical volume. Using a drop spindle, Cawley spun paper thread for the braid running over the pleated book pages. The bonnet’s brim is made of handmade paper that is as soft as fabric and printed with large letterpress letters, which the artist also embroidered. “The fact that you can read some of my hats is what connects them to artists’ books—I want people to think about the type and writing on them.”

Kate Cheney Chappell has received honorary degrees from Chatham College in Pittsburgh (1996) and Colby College in Waterville (2009). She is cofounder of two environmentally conscious corporations, Tom’s of Maine and Ramblers Way Farm, and is on the board of Haystack Mountain School of Crafts. In 2006 Chappell gave the funding to establish the Kate Cheney Chappell ’83 Center for Book Arts at the University of Southern Maine. She has had four solo shows, including last year’s InterRelated: One Artist’s Response to Silent Spring at Chatham University Art Gallery. Her work is in the collections of the Portland Museum of Art, New Britain Museum of American Art, and the New York Public Library, among other prestigious institutions. She is represented by the Lupine Gallery on Monhegan Island and the Mast Cove Gallery in Kennebunkport.

For Chappell, art making is a sacred act. She uses printmaking, painting, watercolors, collage, sculpture, installations, and artists’ books to convey her profound awareness of and concern about the environment and our place in the world. She says she became conscious of the interconnectedness of the universe at a very early age and continues to find inspiration in the natural world as an adult. While some of her work evokes humanity’s disastrous effects on the environment, much of it pays homage to the resiliency of nature. Combining abstract and representational imagery of flora and fauna, often in multiple layers, Chappell’s creations evidence a highly sophisticated sense of color and composition.

The artist’s personal connection to books dates back to childhood visits by her aunt, who was a writer of young adult fiction. Chappell herself has been writing poetry since age 14, and she made her first artists’ book, a collection of poetry, in college. Having kept visual journals for the past two decades, Chappell began making artists’ books in earnest after taking a class with Rebecca Goodale in the mid-1990s.

The unique artists’ book God to the Serpent takes its title, inspiration, and text from a poem by Virginia Hamilton Adair (1913–2004) in which God praises the serpent’s sleek, silent body as superior to that of men. In Chappell’s interpretation, a serpent winds through the pages of the handmade book, disrupting its formal unity. The book’s visual coherence is reestablished through the use of just a few colors throughout. “Humans generally think of themselves as the favorites of God and every other being as lesser,” explains Chappell, “but Adair’s poem turns that notion on its head, and that inspired me.”

Rebecca Goodale’s artists’ books have been the subject of numerous solo shows and are in many public collections, including the George J. Mitchell Department of Special Collections and Archives at the Bowdoin College Library, the Maine Women Writers Collection at the University of New England, the Herron Art Library at the Indiana University-Purdue University in Indianapolis, and the Miriam and Ira D. Wallach Division of Art, Prints, and Photographs at the New York Public Library. Goodale has received many awards, grants, and fellowships, and has taught book arts at various institutions, including the Haystack Mountain School of Crafts. Goodale is the faculty director for Book Arts at Stone House at the University of Southern Maine. Her artists’ books can be found at the Turtle Gallery in Deer Isle and Vamp and Tramp Booksellers in Birmingham, Alabama.

Goodale studied both book arts and textile design but has concentrated on the former since the late 1980s. She actually made her first artists’ book, about her chicken, at the ripe age of five, and sold its first two copies to her mother and grandmother. For Goodale, “artists’ books have everything I want: form, color, narrative, and intimacy with my audience.”

Goodale is a perfectionist who produces meticulous works of art that are thoroughly researched and perfectly capture the characteristics of her dominant subject, the natural world, through artistic means like texture, color, and repetition. Using elaborate processes, intricate details, and three-dimensional layering, her books become equivalences for how leaves fall through the air, birds take flight, and plant tentacles cascade downward. “My books do a lot of things,” says Goodale. She uses a great variety of bindings and book-related forms, with printmaking as the main medium to create imagery.

Goodale editions most of her books, and likes to concentrate on a particular theme for a while. Since 2000, she has focused on plants and animals currently listed as threatened or endangered by the state of Maine. Working with local naturalists, she sketches and takes copious notes on her subjects. Pygmy Water Lily is part of the Maine Threatened Species series. Its leaves and blossoms have been printed on handmade paper, colored in, and cut out, and its stems formed from dyed and crinkled paper ribbon. The book is interactive and can be arranged as seen here, showing how the plant would occupy water. With this series Goodale aims to raise awareness and appreciation of Maine’s endangered flora and fauna, not as a botanist would, but as a visual artist fascinated by her subject’s complex beauty.