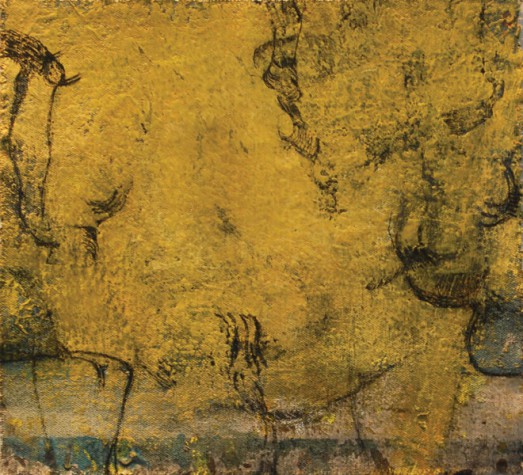 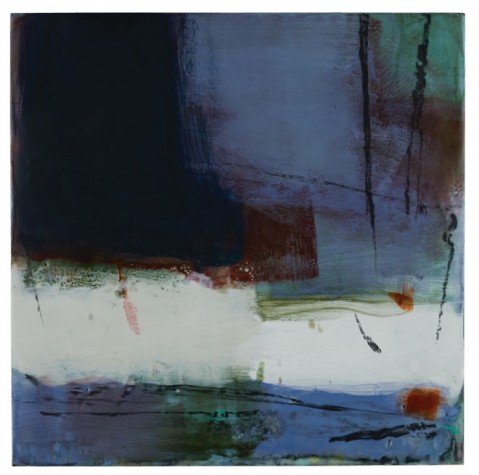 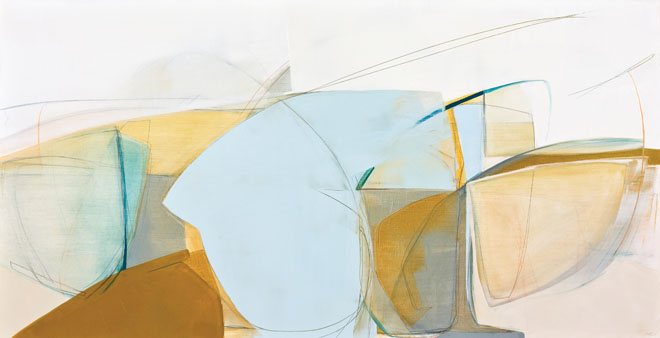 THE CANVAS – February 2013
By Britta Konau

Painters Steven Aimone, Sandra Quinn, and Rose Umerlik use richly layered color and line for intuitive expression. Reflecting an idiom of gestural abstraction, each of the artists’ works visibly contains its history of making.

Steven Aimone spent his formative years as an artist in New York, immersing himself in the offerings of galleries and museums. Before receiving an MFA in painting and drawing, he earned a BA in philosophy. His analytical mind serves him well in teaching and writing about art. Aimone’s most recent book, Expressive Drawing: A Practical Guide to Freeing the Artist Within, was published in 2009. He has work in numerous corporate and private collections and in the Ormond Memorial Art Museum and Gardens and the Duncan Gallery of Art at Stetson University, both in Florida. The artist divides his time among Asheville, North Carolina, Rockland, and Monhegan Island, where the Lupine Gallery shows his work.

When he was studying philosophy in college, Aimone realized that the questions he wanted to answer “were not answerable but matters of faith.” For him, however, painting could touch and express the human psyche and spirit, accessing the same forces and energies present in nature. It may have taken surrealism and abstract expressionism to provide a visually concrete language that directly draws on the human psyche and body, but according to Aimone, throughout the history of art “every great painting has this nonobjective language of rhythms and sequences embedded in it beyond any narrative and representation.”

Aimone gradually turned away from landscape painting in the late 1980s and early 90s, when representation increasingly encumbered his tendency toward improvisation. With rare exceptions, he has been painting nonobjectively ever since. His recent works incorporate gestural graphite marks that are partially obscured by fields of one or two colors. The paintings appear to be suspended in time, unrelated to the temporality of the here and now. Aimone starts every painting with automatic drawing or chance marks. “These first features set events into motion, and I proceed, responding to them with the intelligence and intuition of my body,” he explains. In the process, analytical thinking acts as a compositional corrective only. “I am not so much expressing myself as tapping into the universal, doing the same thing over and over again, each work becoming a unique attempt to capture it.”

Emergence and Dissipation SW 2012-#1 (Asheville #1) is from a series of paintings executed on pieces of a used drop cloth. The found colors and forms supply a starting point for serendipity and remain visible on the work’s bottom edge. The organic quality of the hatched lines and shapes, together with the painting’s parchment-like color, vaguely suggest parts of the human body, as if we were looking at a half-erased Old Master drawing. Although he is not consciously aiming for figuration, Aimone sees echoes of cave paintings in this work, suggesting the presence of kindred spirits over time. “Elements are in continual flux—emerging and dissipating—as if undergoing processes of birth, growth, decay, death, and rebirth.”

Sandra Quinn grew up in Texas and lived in the western part of the United States before moving to Maine from California. Fourteen years ago she switched from oil painting to encaustic, a wax-based medium, out of a desire to try something new and challenging. Quinn’s work has been exhibited widely in galleries throughout Maine and as far away as Tanzania. She is represented by the Greenhut Galleries in Portland and the Littlefield Gallery in Winter Harbor.

Quinn aims to express the influences and experiences of her life, which can take the form of memories, emotions, and perceptions, often of the nature around her. “I respond to a bright sunny day, to the light on the snow, the short days of winter, how it affects me,” says the artist. Her paintings thus become “a reflection of what I hold sacred.” Quinn communicates this rich interior life in a variety of media in addition to encaustic, including printing, drawing, and mixed-media collage. Her work also embraces a great variety of compositional approaches, from allover fields of gestural marks to clearly structured fields of color. Some paintings are joyous and colorful, others rather somber in mood. Reflected in this spectrum of expression may be both Quinn’s memory of the open vistas of the West and her current reality of beautiful but more contained Maine. “What ties it all together is a sense of space, light, and movement.”

Quinn’s working process becomes a dialogue between the artist and the canvas, panel, or paper she is working on. She explains that, in responding to previous marks and layers of color, “I carefully edit to maintain the prominence of the rhythm.” Applying layer after layer of heated, fluid wax in various colors, the artist works back into the medium using razor blades, knives, and other tools. The linework is executed with graphite or oil sticks and remains partially visible through several layers of encaustic.

Sundown brims with layered fluidity interrupted by occasional solid marks. Overlapping areas of cool blues, greens, and rust red are intersected by a horizontal river of white that laps into the colors bordering it. For Quinn the final image triggered a memory of a winter night sky as the sun is going down. Titles always come last for the artist, and they are often intentionally ambiguous. “I invite viewers to explore their own responses to the work by looking within themselves,” Quinn says.

Rose Umerlik was raised in Baltimore, Maryland, and frequently traveled nationally and internationally before settling in New England. She currently divides her time between a home in Kittery and a studio in neighboring New Hampshire. She has had 10 solo shows in galleries throughout New England and has been included in group shows all over the country and internationally. Umerlik has won several awards, among them a 2008 grant from the New Hampshire State Council on the Arts to participate in the Takt Kunstprojektraum residency in Berlin. Her work has been reviewed in Art New England and Artscope and appears in two books published by the artist. Umerlik is represented by Nahcotta in Portsmouth, New Hampshire, Alpers Fine Art in Andover, Massachusetts, and the Mark Humphrey Gallery in Southampton, New York.

Working mostly on a relatively large scale, often in diptychs and triptychs, Umerlik seeks to express her emotions, memories, and private struggles in a universally accessible abstract language. In addition to the self-exploratory and revelatory character of her works, the paintings also encompass notions of the figure and landscape.

Within a very flat pictorial space large expanses of color are intersected by areas of dense activity, either clusters of lines or accumulations of smaller, organic forms. Lines are not always outlines but can have authority in themselves. Together with colors and forms, they suggest presences, or people, in complex relationships with each other, full of force and movement. Until 2008 Umerlik included direct references to nature in her paintings; associations with geology and coastal landscape still surface in the boulderlike shapes and color schemes that have become part of the artist’s abstract vocabulary.

When working on one of her paintings, Umerlik both intuitively shapes the composition and at the same time is receptive to recognition, in a continuous dance of give and take. Her extensive reworking of an initial design may take away as much as 70 percent of the original layout, which results in texturally rich surfaces. The decidedly horizontal Negotiations is enlivened by an interplay of opacity and transparency within its narrow palette of blues, ochres, and whites. Lines end abruptly or momentarily disappear to resurface at another point. The central and dominating light blue shape is on the verge of overpowering and suppressing all other forms, yet they are crowding in and demanding their own space. This struggle is calmed by the white expanse overhead that gives rise to an undulating horizon line, a formal element that used to be very prominent in Umerlik’s paintings. Negotiations is part of a series of paintings in which the artist deals with her biological and chosen family. “It visualizes a family dynamic, the good and the bad, and the struggle which is required to make it work because this is where you are,” Umerlik explains. “I hope that my work resonates with the human nature and collective experience we all share.”