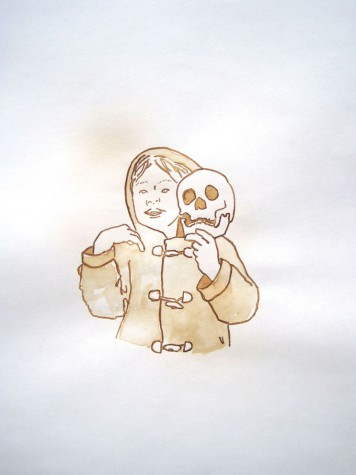 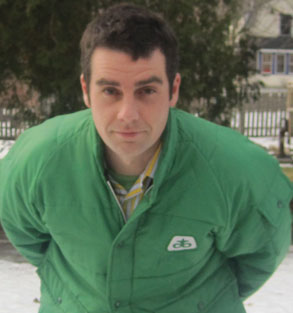 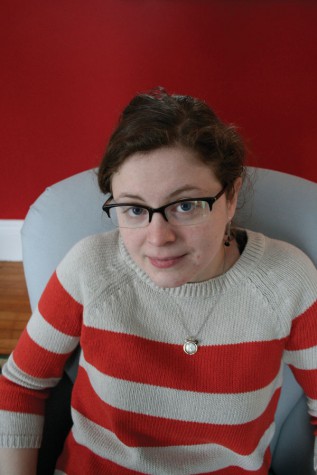 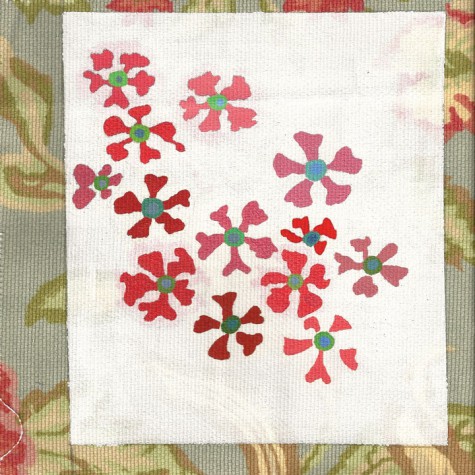 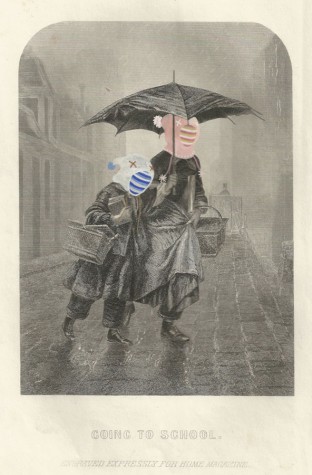 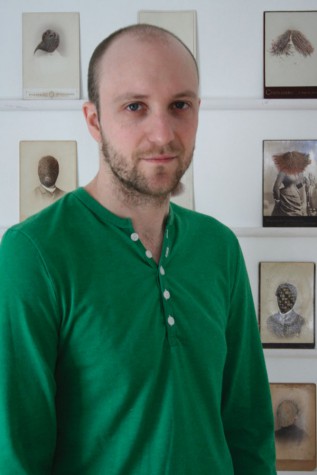 Tom Butler, Ben Potter, and Kate Russo are three young artists who use media, often of a non-artistic kind, in surprising ways. Their approaches include repurposing and appropriating found objects and mundane materials for their own creative ends. Russo and Butler are married, and—not surprisingly—their work shows some affinities.

Born in London, Tom Butler received a degree in the history of art and design at the University of Southampton before switching to studio art. He earned his BA from the Chelsea College of Art and Design and his MFA from the Slade School of Fine Art. Butler’s work has been included in many solo and group shows in England and was shown at Susan Maasch Fine Art in Portland. He is currently the art director at the Community Schools at Opportunity Farm and Camden.

Butler performs appropriations and interventions using vintage postcards, withdrawn foreign banknotes, Victorian etchings, and photographic cabinet cards and cartes de visite. With a pronounced inclination toward the weird, he transfigures imagery of the real into unsettling scenarios and characters of the imagination.

Butler first worked with banknotes by interweaving strips of them to create pictorial dislocations. He then cut out individual design elements and built fascinating new imagery from the currency. The more abstract collages are beautiful arrangements of patterns, colors, and shapes, and the more representational works include imaginary towns and disfigured faces. These facial distortions led Butler to work with vintage portrait photographs. In what he calls “a collaboration with the sitter,” Butler paints wild cranial and facial hair formations, decorative patterns, and gaping, toothy orifices that partially or entirely conceal the sitters’ faces to hilarious yet disturbing effect. “Initially, I was quite nervous about doing this,” Butler admits, “but on the other hand, these photographs were abandoned, and I am giving them another life and take good physical care of them.”

Going to School belongs to Butler’s series of appropriated Victorian etchings. Using gouache, the artist gives the original images a decidedly sinister turn, playing with the Victorian sense of the grotesque, which often indulged in the monstrous. Butler’s creations are also reminiscent of Max Ernst’s imaginative collages and graphic novels, which repurposed illustrations from Victorian encyclopedias and novels. Going to School was originally included in Home Magazine, as the engraved caption states. Two girls hurry along an urban street on a rainy day carrying baskets and schoolbooks, while the older girl shields them under a large, battered umbrella. Where once the faces and hairstyles portrayed a semblance of identity, Butler has added stripes and colorful ski hoods with embroidery and pom-poms. The artist’s various interventions act as different kinds of masks, making visible the obscurations we all employ. “I have always been fascinated by hiding, which I consider the most honest way of representing ourselves,” says Butler.

Originally from Tennessee, Ben Potter received a BA in biology and fine art from Williams College and an MFA from California College of the Arts. He has received many grants and fellowships, including a Mellon Environmental Studies Grant for experimental work in the arts as an undergraduate and a Good Idea Grant from the Maine Arts Commission in 2010. Potter has taught at colleges in Wisconsin and Vermont and is currently a professor of art at Unity College. His work was featured in recent solo exhibitions at Unity College, Perimeter Gallery in Belfast, and NavtaSchulz Gallery in Chicago.

It is probably Ben Potter’s dual interest in biology and art that motivates him to experiment, take artistic risks, and work with a wide range of material and conceptual approaches in two and three dimensions. So far his oeuvre includes woodcuts, paintings, gouaches on paper, drawings executed with milk and pollen, and sculptures created from wood, felt, lead, crocheted afghans, plastic bags, and found objects. Potter explores the same images of plant forms, landscape elements, man-made structures, and the human figure in various media, as if searching for compositional and material essences. He is guided in this process by a great sensitivity to material properties. “I am very interested in the connotations of materials and how they complicate and enrich a piece,” says Potter.

Many of his images consist of a variety of marks and lines—which barely add up to recognizable subjects—that he creates through a process of formal reduction. He also produces images of friends and family as protagonists in his landscapes to explore “how we create our own micro-worlds.” Ada and Her Skull depicts one of the artist’s children holding a human skull near her head. Juxtaposing a symbol of death against youthful life and beauty, Potter deliberately renders a wealth of clichés we associate with the two subjects and their representations. The child’s joyful attitude and use of the skull as a mask stand in stark contrast to the object’s function as a memento mori.

Potter drew this image with milk—a medium that is extremely difficult to control, since its application remains invisible until the paper is heated and the milk is essentially scorched. Milk and whiteness have strong emotional resonance as symbols of life, primal sustenance, and innocence. Potter superbly combines evocative use of materials with a strong design sense to complex expressive ends.

Kate Russo moved to Maine with her family at age nine. While enrolled at Colby College, she went on a study-abroad program to the Slade School of Fine Art in London, where she met Tom Butler and later earned her MFA. Russo has had solo and group exhibitions in England and Maine, including a show at Susan Maasch Fine Art in Portland. Her work was included in the recent exhibition DÉCOR at the University of Maine at Farmington Art Gallery.

The majority of Russo’s work involves superimposing colors and patterns onto materials that already possess an existing design structure. During her process, she responds intimately and imaginatively to the found arrangements. In one of her series the patterned insides of envelopes provide Russo with a multitude of possibilities for reinterpretation. Fascinating appropriations on an incredibly intricate scale are made by highlighting existing patterns with color or establishing new formal connections.

Russo also uses the grid structure of graph paper to set up rules and parameters that lead her to unearth decorative patterns within the strict geometry of the paper, as if she’s excavating existing but formerly invisible traces of organic origins. Her hand-drawn additions superimpose a nervous, intense energy onto the manufactured paper. Russo has also painted on square panels with a similar focus on pattern, yet here the format of the support alone serves as the preexisting condition. The painting’s designs have developed from stripes to colorful grid systems and intricate, lace-like patterns.
In addition to working with wood panels and paper, Russo has a large collection of patterned fabric samples on which she enacts “interventions.” In Floral Intervention #6, she covered a square portion of the fabric with gesso, creating a neutral background against which she could foreground a particular pattern element in a subtle range of colors. In other works on fabric, she gessoes only those parts of the pattern that she elaborates on or repaints—only careful scrutiny will reveal her contribution. The fabrics act as indices of domestic space. “The patterns themselves become like rooms, and it is my job to find a way for the paint to live in this room,” the artist says. Yet patterns, layering, and repetition are also elements of music—an art form that Russo initially wanted to pursue and that she listens to, loudly, when working in her studio.