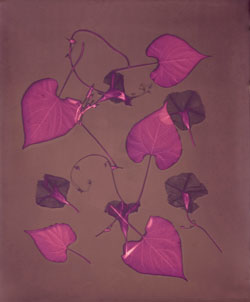 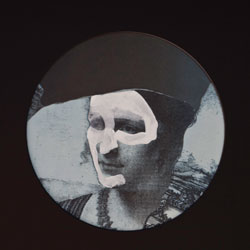 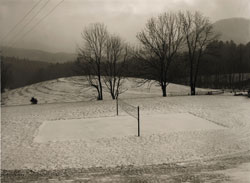 With the invention of digital cameras and printers, photography has undergone major changes over the past few decades. A tremendous amount of possibilities have opened up for fine-art photographers, but not everyone is subscribing to the new technology. In fact, there are a considerable number of photographers who have revived historical printing processes, and Brenton Hamilton, Dianna Rust, and David Wolfe are among them. While these Maine artists use historical and alternative photographic processes, they do not shy away from digital technology if it serves their vision.

Hamilton’s photographic process of choice is cyanotype, which was invented in the 1840s. Cyanotype printing involves coating paper with a photosensitive iron-compound solution, placing a transparent, translucent, or perforated object on it, and exposing it to sunlight. The image appears in white on a Prussian blue background.

For his source material, Hamilton combs through old scientific, anatomical, botanical, and art historical illustrations that he digitally turns into negatives. These he collages or superimposes to create complex compositions or simple silhouettes. After printing, he sometimes embellishes his works with white gouache and silver leaf.

When measuring out the necessary chemicals using small scales, Hamilton feels like an alchemist. He has found his overarching inspiration in the Renaissance and calls himself “a voracious collector of objects,” with the earliest items in his possession dating back to the seventeenth century. “My living environment looks a lot like my photographs,” he says. Much of his source imagery depicts art from previous centuries, but Hamilton also incorporates elements of the surreal. Plants sprout within and out of a man’s head, faces are deformed and violated, and limbs and body parts are reconfigured in new relationships. In this way, the artist reinvents narrative using poetic juxtapositions and associations that are designed to disrupt and even disturb. Tondo, a Renaissance term for a round work of art, reconfigures elements of works by Lucas Cranach the Elder and Albrecht Dürer. Fragments of landscape and solid black encroach on the contour of the head, emphasizing the directional gaze of the sitter. Casually applied white paint outlines the eyes, nose, and chin, giving the face a skeletal appearance. This photograph does not have the typical color of a cyanotype because Hamilton also utilized another nineteenth-century process—applying washes of gum arabic—to add texture and color.

Dianna Rust’s fascination with historical and alternative photographic processes stems from the delight she takes in “the transformation and transcendence of what I am looking at.” She enjoys experimentation and chance, and often uses materials and processes in unconventional ways. The artist’s scope includes toned gelatin silver prints (using minerals and metals such as selenium, copper, and gold) as well as historical processes such as palladium and platinum, cyanotype, and salt printing. Many of her images do not involve a camera at all or were shot with pinhole cameras that Rust fashions from hat boxes. “In a fast-paced, high-tech age, there’s a certain beauty in the simplicity of this ‘equipment,'” she says. For some processes, Rust will use digital tools, but never for printing her images.

Rust’s inspiration and literal subject matter is drawn from her immediate surroundings—her house, garden, and nearby woods. Morning Glory is part of Rust’s ongoing series of lumen prints entitled Lumina. For this cameraless alternative process, plant materials are placed on black-and-white gelatin silver printing paper, weighed down by a glass plate, and exposed to the sun for several hours. The type of paper, outside temperature, and duration of exposure affect the character and tint of each image. Morning Glory presents a wonderful range of single-color values and intensities. Petals, leaves, and swirling vines sometimes overlap, affecting relative brightness. Although crushed and represented in a unifying hue, the flowers’ distinct shape and delicacy has remained intact and identifiable. Yet this rendering pays more attention to its abstract and poetic qualities than to its botanical specificity. Rust believes in the words of French poet, essayist, and philosopher Paul Valéry: “To see is to forget the name of the thing one sees.”

Paper, print, and process are recurring motifs in David Wolfe’s various artistic pursuits and interests. As a master printer, he enjoys bringing the vision of other artists to life, and he is currently collaborating with Charlie Hewitt, Alison Hildreth, Katarina Weslien, and Henry Wolyniec. As the owner of a letterpress operation, he not only actualizes the specific requests of his clients but also creates broadsheets combining text with images of his own design. And as a photographer, he relishes preparing the paper and printing his platinum and palladium images.

Wolfe spreads a small amount of platinum and palladium emulsion over paper, which entirely absorbs the metals. A film negative shot with a large-format camera is laid directly on the paper, exposed to ultraviolet light, and then washed and fixed. The resulting matte print is extremely detailed and has a warm brown tone. Because of their tint the prints are reminiscent of historical and archival photographs—an association that Wolfe uses to great advantage. Many of his images are of timeless landscape motifs, yet others represent architectural and urban scenes that are clearly modern. Wolfe uses this tension between subject matter and presentation to ask: “What kind of story is this object or scene trying to tell us?”

In Winter Games, a snowy rural scene of farmland, woods, and rolling hills is disrupted by power lines running diagonally through the top left corner. A rectangle of even ground, a volleyball court with net, is residual evidence of a summer pursuit in the midst of a natural winter landscape and provides an element of humor and incongruity. In addition, the linear affinities between man-made structures—the power lines, volleyball net, and post-and-rail fence—present graphic interest that is rhythmically spaced within the composition. Wolfe likes to encourage closer looking. “We don’t really notice our surroundings,” he says.