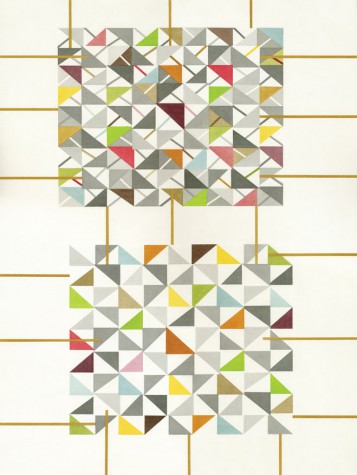 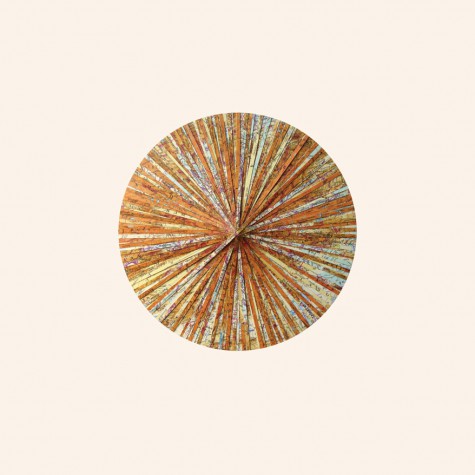 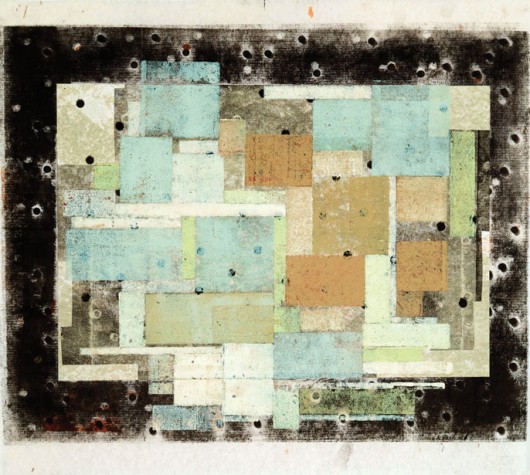 Joe Kievitt, Shannon Rankin, and Henry Wolyniec create intricate abstract works on paper. While the artists use different media and techniques, they employ a similar approach: repetition of elemental components. The resulting patterns are powerfully intriguing and stimulating to both the eye and the mind. All three also share an appreciation for the tension between artistic control and creative chance.

Joe Kievitt uses nothing but geometric shapes of solid color and intricate linework to create complex, abstract compositions. Early on in his career, he found inspiration in nature—specifically the overlapping transparencies of leaves, which he abstracted in shades of black. Since 2010, his work has become entirely nonrepresentational and magnificently colorful. The artist works with ink and acrylic on paper or with tiles in mosaics, and each medium has influenced the other.

For his drawings, the artist develops written instructions a la the minimalist Sol LeWitt, who was a great influence on Kievitt. The self-imposed directives, however, always allow for a certain amount of artistic freedom. He sets up particular spatial situations and resolves them with a mixture of chance occurrences and aesthetic choices that result in geometric patterns composed of elemental repetitions. After several preliminary sketches, Kievitt applies tape to certain areas and then lays down washes of ink and paint over the exposed sections. The interplay of chance and choice ensure liveliness in the work. “Each action, although aided with tools, is done by hand, and the innate imperfections of the human hand are evident when viewed closely,” Kievitt says.

For suspension II, the artist’s instructions included a clear directive: Suspend two forms from the edges of the paper and from each other. Moving out from the center, the rectangular forms were divided into triangles and colored according to specific parameters. The two intricately subdivided rectangles appear suspended by orange lines that seem to pierce and penetrate them. The two forms are slightly offset, and the varying color values create the illusion of advancing and receding shapes. Our eyes keep roaming across the work, striving to resolve and make sense of the patterns.

Shannon Rankin explores the aesthetic and expressive possibilities of maps with great sensitivity to their internal logic. She first started working with maps in 1996 and for the past four years has focused on them exclusively. Rankin’s raw materials include nautical, aeronautical, topographical, statistical, and star maps from the 1960s and 1970s from which she generates installations, collages, and drawings. Her smart and beautiful creations reveal an acute sense of color and form. She works mostly in series and, with an immense amount of patience and great attention to detail, manipulates the maps by cutting, scoring, wrinkling, layering, painting, and pinning them. The resulting work often assumes the character of the charted terrain, including undulating forms made from map portions of waterways or crumpled mountainous territories, thereby imitating nature in the process.

For Peak, from Rankin’s The Uncharted Series, the artist cut narrow strips from mapped mountain ranges and painstakingly arranged them to literally form a peak in the circle’s center. The predominant color of this piece is determined by the shades of brown customarily used to identify elevation changes. Some of the map’s text remains legible, adding visual interest and encouraging a closer look.

While Rankin creates self-imposed guidelines for her work, she keeps them flexible and often lets the material itself suggest the rules of engagement. Additionally, the words she collects from science textbooks and atlases may trigger certain directions to explore, while occasionally supplying titles for the works as well. “Maps are the everyday metaphors that speak to the fragile and transitory state of our lives and our surroundings. Rivers shift their course, glaciers melt, volcanoes erupt, boundaries change both physically and politically. The only true constant is change,” says Rankin. While maps may help orient us physically or intellectually, their promise of certainty remains subject to constant adjustment.

Henry Wolyniec has been making abstract works on paper for the past 11 years. He builds up complex and subtle compositions in multiple steps using a variety of techniques and materials. Initially, these included paper collage, india ink, acrylic, and inkjet printing. Dots were a major compositional element—“the simplest, purest image possible,” Wolyniec says. Since 2009, he has been working closely with David Wolfe of Wolfe Editions in Portland to incorporate relief printing—which he considers a perfect accompaniment to collage—into his process. Today, it is often difficult to distinguish the printed and collaged elements of his compositions. Moving back and forth between printing inked pieces of Masonite and collaging paper onto a work in progress, Wolyniec allows a work to dictate its own needs. In this way, he balances intention and accident to create compositions of symphonic effect.

Papers of varying color, texture, and weight set off rhythms that reverberate throughout each work. The subtle whites, blues, greens, and browns of HW10.21 are set against a dark ink background that is pierced by halos of light around the raised shapes where ink did not reach the paper. Black dots also spill over into the rest of the composition. The squares and rectangles that make up the center seem almost insubstantial in their transparency. Carefully balanced colors and shapes, weight and lightness, give this work a profound sense of harmony, even meditative gravity. Meaning in this case may lie within material and form, and as with all of Wolyniec’s collages, HW10.21 is self-contained yet open to free association.