Power of the Wind 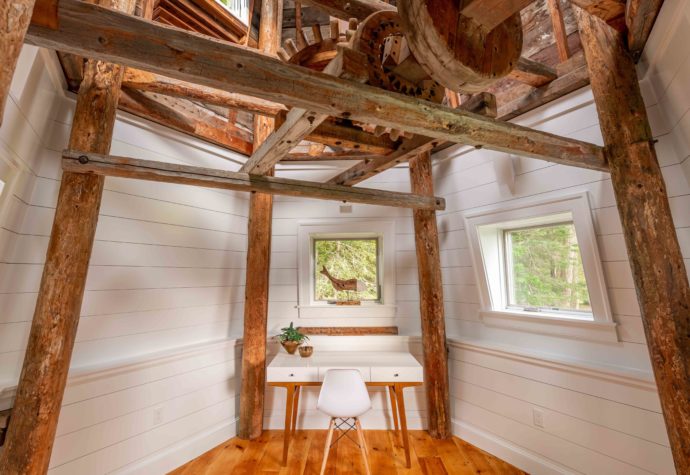 “It’s kind of a little bit of local folklore and part of Castine’s history. There was a Mr. and Mrs. Robert Haines from Philadelphia, who we think might have initially summered in Castine and then later stayed over winters, but we don’t really know for sure. Around the 1920s the Haineses had the windmill shipped up to Castine on a steamboat from Philadelphia to be used as a hobby house for Mr. Haines. After the Haineses, there’s a blank period until the 1960s when Clark Fitz-Gerald, famed sculptor and Castine resident, purchased the property with his sister Leah. It was again kept as a hobby house, and they would rent it out over the summer because there’s a small structure attached to it (that we refer to as ‘the shack’) which had a small sitting area, a tiny bathroom, an efficiency kitchen, and a built-in bed inside the windmill.

“We bought the property from Clark and his wife in 2000 and built and attached our current home to the structure. The whole idea was to preserve and protect the windmill and the shack because they are original to the property, so we had both structures lifted and poured a new foundation for them. It wasn’t until later that we decided to further renovate the windmill, and that’s when Ben Block from Block Brothers Custom Cabinets came in. He was willing to work with us on refurbishing the interior of the windmill while preserving all of the original mechanics.

“There used to be a subfloor below the mechanics with a tiny staircase, but we removed that to open up the space, and now you can see everything when you walk in. We added nickel-gap paneling on the lower walls to brighten it up and breathe new life into it. The inside of the windmill had remained incredibly dry and was well preserved, so it was mostly a matter of shoring it up (and waging war against some stubborn resident squirrels). We wanted to make sure that it was welcoming and usable, and at the same time respect that it is a very special piece of architecture with a fun story behind it. Now it’s my husband’s office and is very much a part of the heart and soul of our home. We love to turn up the lights and run down the street to admire it.”
– Linda and Ned Cloonan, homeowners