Jenn Bravo, owner of the Kitchen and Photo Studio, on how she dreamed up and designed the space. 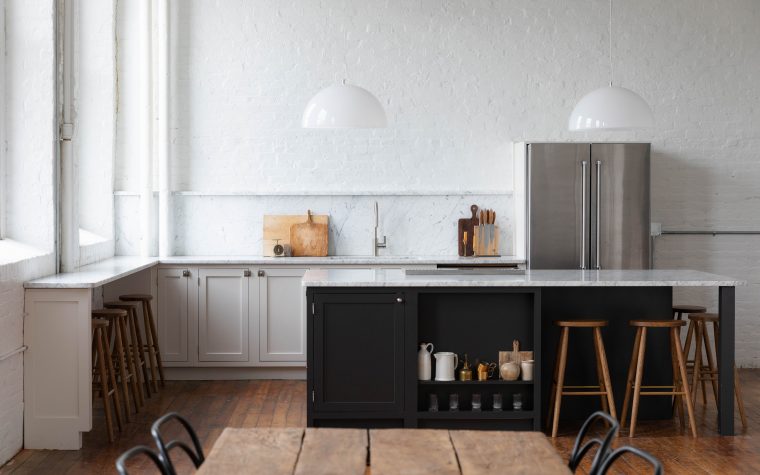 “I noticed a lack of aesthetically focused production spaces in Portland and northern New England for small businesses, so they have to set up a huge staged room or kitchen or rent an Airbnb or a house, which creates its own hurdles. I knew the studio needed to be pretty, to have natural light with the option of strobe lighting. This unit was shown to me, and it was the blankest canvas of any of the spaces I had seen. We had to bring in all of the plumbing, for example. But because it was this blank canvas, it gave me the opportunity to make it just as I saw it in my brain.

“First it needed a fresh coat of paint, and then we installed the offices and the kitchen. A space I had seen before had all these nooks and crannies. Going into this big blank square, I knew there would need to be a spot to hold all of my gear and props, and that it would be nice to tuck away into an office to do some editing or phone calls during production times when there might be other people in the studio.

“When designing the kitchen, I knew I wanted a large, eight-foot island, which happens to fit an eight-foot roll of seamless photography paper. I wanted the stove in the island so people could film things like cooking tutorials with the host making the food while facing the camera. And then I wanted to create some space to accommodate seating so I could eventually rent out the studio for events. It dawned on me that I should pull the counters further around under the windows. It gives me more production space, but it also adds four to six more seats. I made decisions like having a Bertazzoni oven instead of a more production-focused oven to be aesthetically pleasing and to have a photo-focused space rather than a production-focused space so it could look like somebody’s home if it needed to.

“I am, by the way, very lucky to have a husband who is a professional carpenter: I get to come up with these grand ideas, and he’s able to help execute them.

“I think the thing I want to hit home whenever I’m talking about the studio is that it’s a production space available to small businesses in the area—that’s my goal in having it. Of course it serves me in all the ways I need it to serve me, but I really see it as an opportunity to champion the small businesses of Maine.”