A Spirit of Home 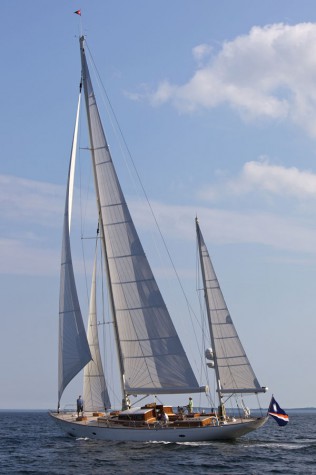 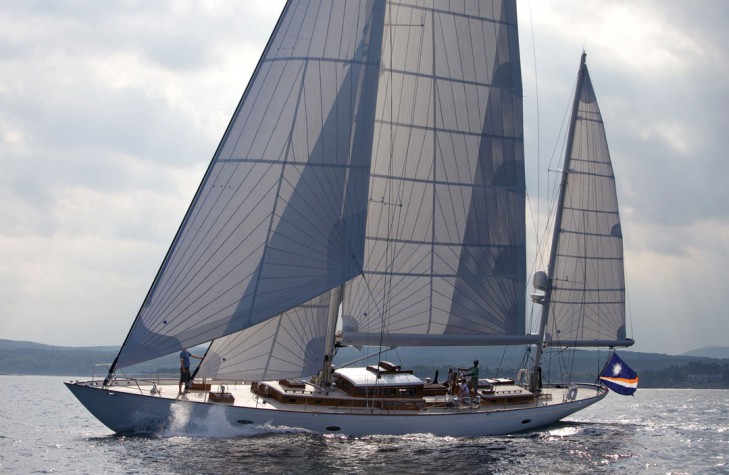 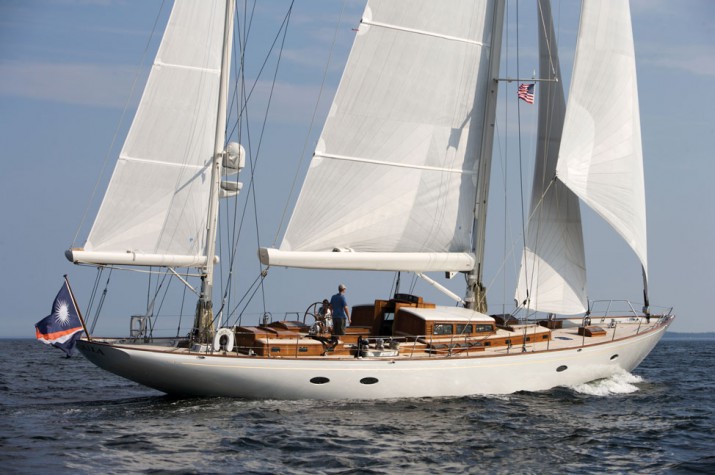 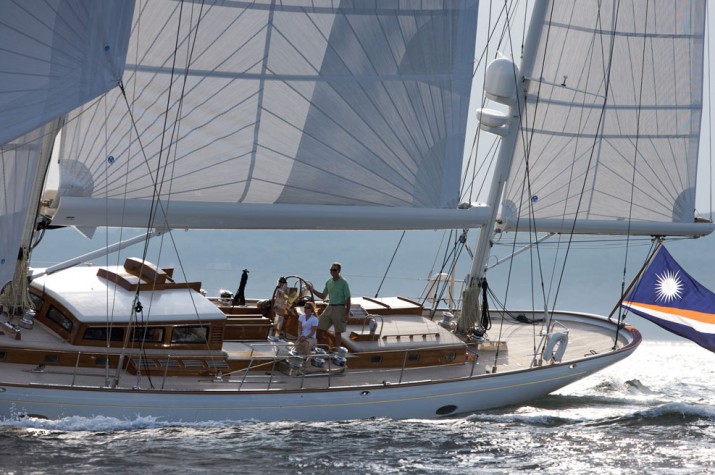 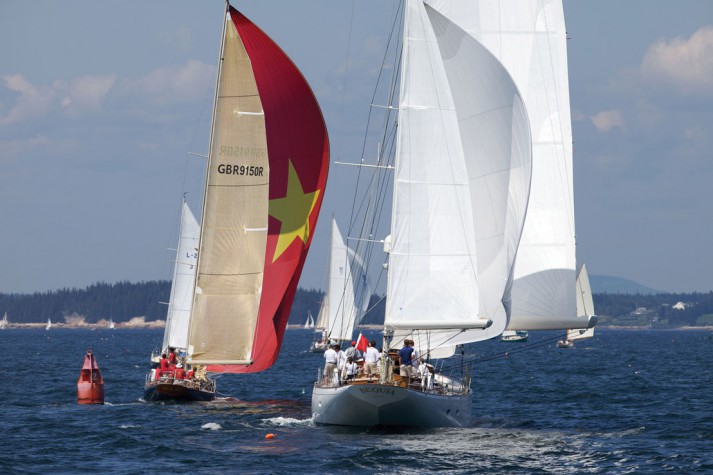 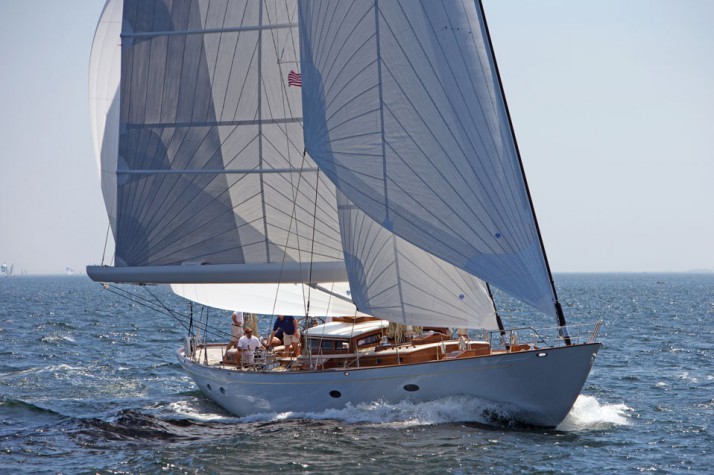 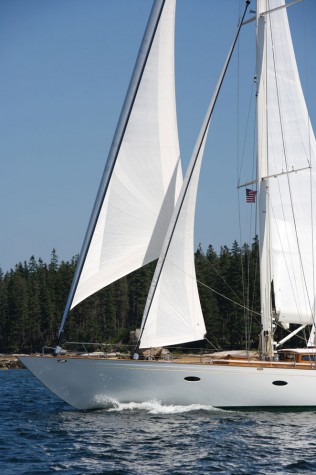 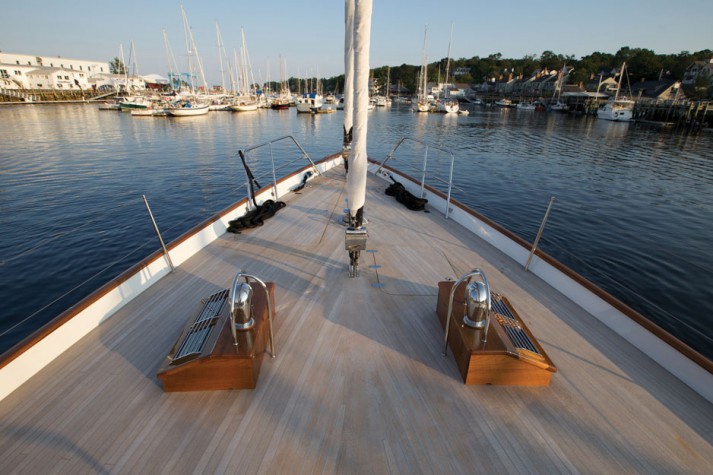 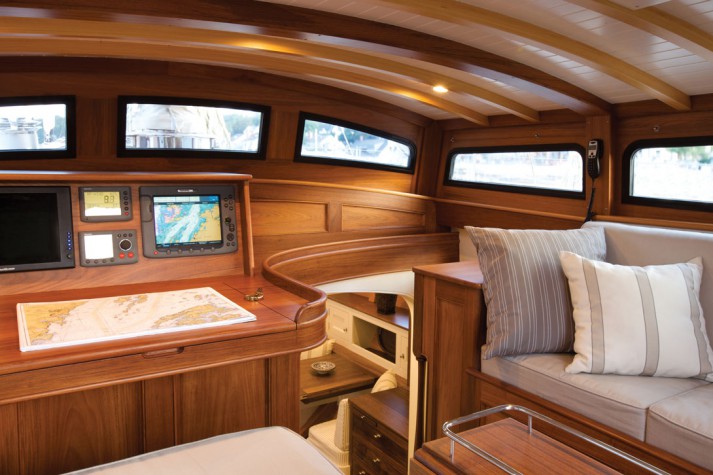 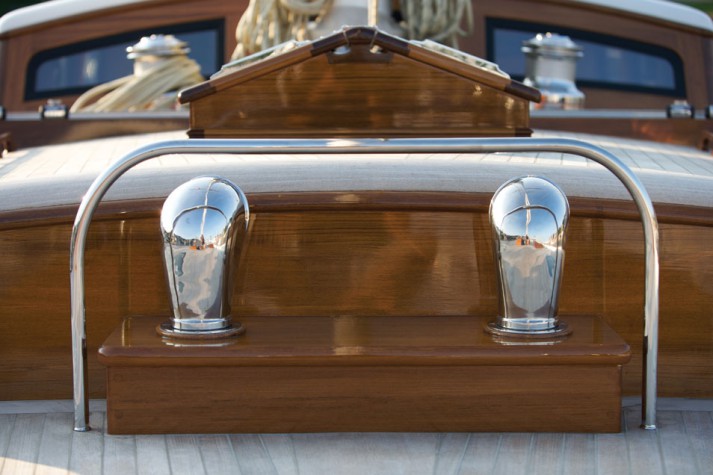 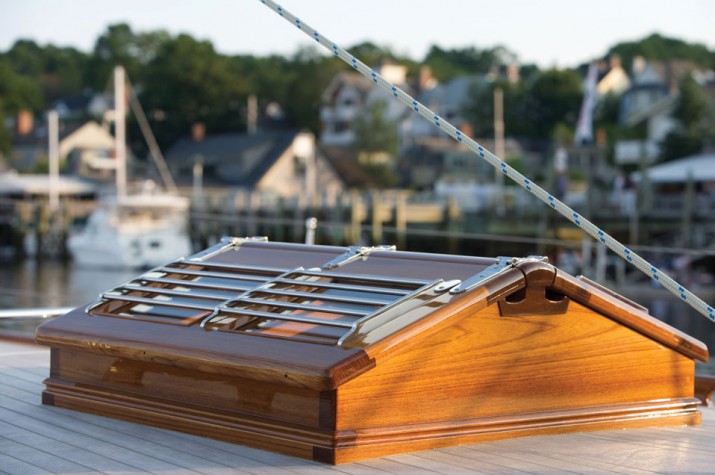 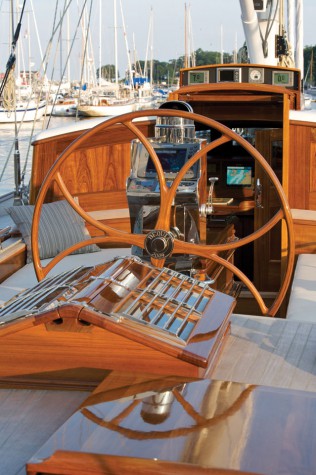 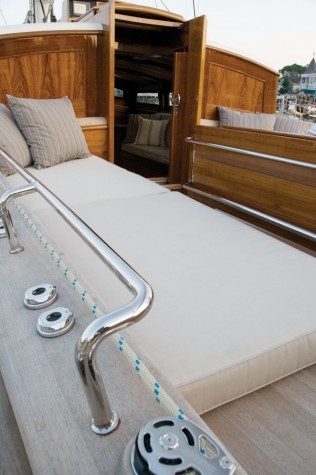 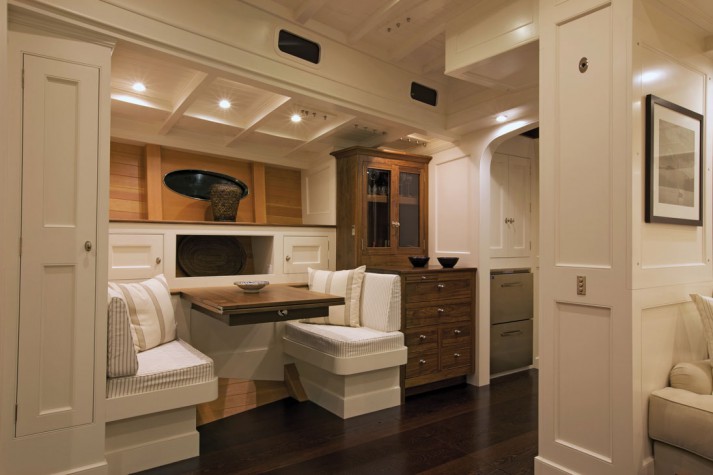 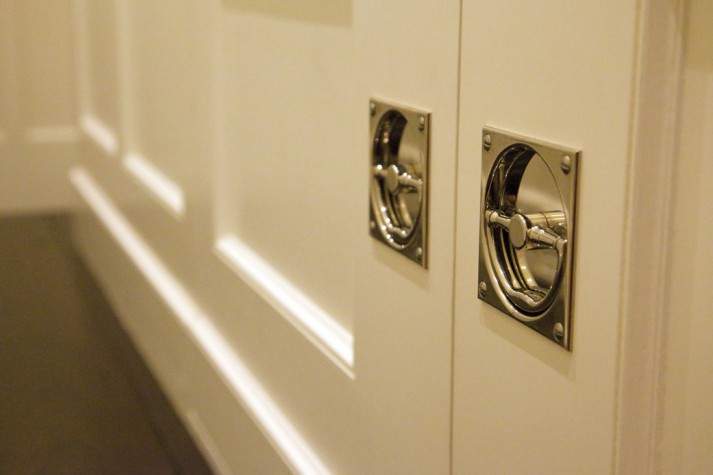 Tradition, modern technology, and style come together in a sailing yacht

Yacht design and residential architecture both involve the creation of living spaces that must serve the practical needs and aesthetic preferences of their occupants, but beyond that the two professions have little in common. While a house can take almost any shape, the design of a sailing yacht is dominated by the fact that it is fundamentally a vehicle—a machine using the relative motions of air and water for its propulsion. Unlike a house, a yacht has no fixed setting—she must look at home in constantly changing scenes of land, sea, and sky. Every yacht is also viewed against the background of Tradition, a setting in itself, and a stronger influence in yacht design than in most fields of endeavor.

The Brooklin-based firm of Stephens Waring White Yacht Design has made a name for itself by designing yachts large and small that fall into an emerging “Spirit of Tradition” category: celebrating modern wooden boat-building technologies and the beauty inherent in the resulting structures and emphasizing superb sailing characteristics while incorporating aesthetic elements that harken back to traditional notions of beauty.

When in February of 2005 Jes and Deby Staley approached the firm for the design of a new yacht, it was a request that any designer would be pleased to receive. The couple had a specific interior arrangement in mind, but allowed the designers to determine the size of the vessel based solely on what was needed to comfortably contain that arrangement. With regard to the character and appearance of the yacht’s exterior, the Staleys simply asked for traditional beauty second to none.

It was agreed that Deby Staley, proprietor of Debora Staley Interiors, Inc., an interior-design firm in New York, would work closely with the designers in creating the interior of the yacht. With different individuals this arrangement might not have worked, but in this case all parties quickly developed a warm working relationship based on trust, flexibility, and a mutual respect that grew deep over the course of the project. The design phase consumed a year, and the yacht was constructed between the summer of 2007 and her launch in June 2009.
The Brooklin Boat Yard was selected to build the yacht, in a deal sealed by a handshake with yard owner Steve White. The Staleys were able to work directly with Steve and his craftsmen, and every detail remained open to their input, right down to the hinges on the cabinets. Many elements of the decor and woodwork, some interior compartments, and the cockpit were first created as full-size mock-ups during the design process, and in some cases these were actually tilted to simulate the yacht under sail.

The stunning result is the 90-foot yawl Bequia, widely recognized as one of the finest yachts of her time. Named for the Caribbean island on which the Staleys spent their honeymoon, she is seen by the owners primarily as a comfortable living space. They wanted not ostentation but “a spirit of home,” as Deby puts it.

Most large wooden yachts built in recent years have interiors dominated by vast amounts of varnished wood cabinetry. Bequia is something entirely different. Most of her interior is painted in various shades of white. Paneled bulkheads, grooved overhead decking, exposed structural members, and carefully designed moldings and trim—all white—provide visual texture through the interplay of light and shadow. Instead of the traditional striped teak-and-holly cabin sole, Bequia’s is made of wenge, a nearly black tropical hardwood. With accents of color in the upholstery and carefully designed lighting, it is a warm, homelike, upbeat space—a far cry from the sometimes oppressive atmosphere created by the dark, all-varnished  interiors typical of many recent large yachts.

The arrangement reflects an intended pattern of use different from that of many large Spirit of Tradition yachts. While Bequia will participate in a number of low-key classic yacht regattas, it will be just for fun. Therefore, the yacht does not need the large crew necessary for intense competition, or the berths to accommodate them. The owners do not anticipate having many guests aboard, and they assume they will have no guests when sailing offshore. The resulting layout includes a full-width owner’s stateroom aft, and a large guest stateroom all the way forward. Up forward is the usual location for crew’s quarters, but at sea this is an area of increased motion, and the Staleys wanted their crew to be comfortable. A stateroom for the captain and two alcove berths for crew members are located amidships.
The other unusual feature of the interior is the absence of a dining area other than a small dinette opposite the galley. Typically, the main living space, or saloon, of a yacht this size is primarily arranged for dining, but the Staleys wanted it to be more like a living room, with comfortable seating and a broader, more open arrangement. The saloon features eight and a half feet of headroom, also unusual in a yacht of this size. Virtually all dining is done on deck in the cockpit.

The cockpit dominates the on-deck arrangement, and represents yet another departure from tradition. The seats are exceptionally wide, with high railings outboard and large, movable cushions that can be arranged to accommodate the activity at hand. If arranged two deep, for example, they can be used as backrests for sitting around the large drop-leaf table. When otherwise arranged, the owners can sit back with their feet up on the seat or stretch out to take a nap. A traditional awning, which can cover a large portion of the deck area and the cockpit, provides shelter from the sun and rain.

On deck, Bequia is an example of the Brooklin Boat Yard’s mastery of traditional joinery and detailing. While the interior is largely painted, almost everything on deck is either bare or varnished teak, and every detail is designed to emulate and exceed the quality and finish typical of yachting’s “golden age”—the period between about 1880 and the First World War, when yacht building reached its zenith in terms of craftsmanship and finish. The bold and sweeping curves of the hull, the long overhanging bow and a shapely stern complete the yacht’s traditional appearance. Indeed, a look at Bequia suggests that a new golden age of yacht building has commenced.

One of the owners’ favorite features is the chart house, a small superstructure with windows all around, containing settees, a table, and navigation equipment and serving as a foyer for the rest of the interior. The yacht can be sailed from the chart house in inclement weather, when it can also serve as a sheltered dining area. Because the owners see it as part of the deck arrangement, the chart house is mostly varnished inside in the traditional fashion. The Staleys love the dramatic transition one experiences when going below from the cool, dark chart house to the unexpectedly bright, airy interior lower down.

Because the designers were allowed to configure the hull, underbody, and rig as they saw fit, Bequia’s function as a sailing vessel is uncompromised. Recently, racing in a classic yacht regatta in Antigua against former America’s Cup contenders and other large yachts, Bequia placed third after sailing a relaxed and comfortable race.

Jes and Deby look forward to many years sailing Bequia, following the seasons between New England and the Caribbean, with voyages to Europe and Deby’s native Brazil among future possibilities. The experience of working with designers and builders so clearly committed to quality, craftsmanship, and integrity, together with their eagerness to please and their famous Maine sense of humor, have given the Staleys memories that will always form the foundation of their relationship with a yacht that is both a home and one of their generation’s most enduring works of art.