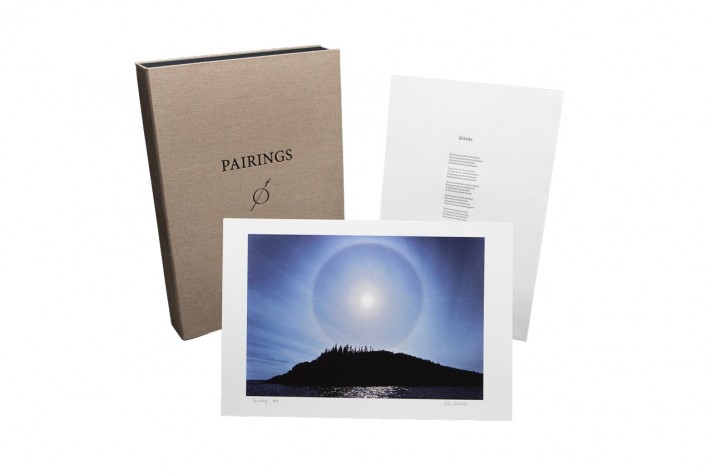 Photographer Peter Ralston and writer Philip Conkling have been collaborating for nearly 40 years. In 1983 the two founded the Island Institute, and over the past three decades the pair and their team have been working tirelessly to sustain Maine’s island and remote coastal communities by studying them, advocating for their residents, and exchanging ideas and experiences. Ralston’s photographs and Conkling’s words have long been paired together in this pursuit: in 1984 the two launched the Island Journal to chronicle the art and science of island life; they later created the newspaper The Working Waterfront, which now has a readership of over 65,000. Conkling and Ralston also wrote and photographed, respectively, the book Islands in Time: A Natural and Cultural History of the Islands of Maine, a landmark study in human ecology.

The two recently embarked on a new creative collaboration: a limited-edition portfolio called, fittingly, Pairings—20 archival pigment prints handmade by Ralston paired with 20 poems by Conkling on 13- by 19-inch sheets of Museum Etching paper made by Hahnemühle of Dassel, Germany. “It’s ultimately much more intimate than simply having created another book,” says Ralston. “We’d been thinking about this project for 20 years,” says Conkling. “Peter would often ask me for a poem that paired well with one of his images, so it was only natural that we do something like this. In many ways, a poem is an emotional image.”

Editions of the collection—with letterpress by Wolfe Editions, folio sleeves by J.S. McCarthy Printers, and a linen-covered portfolio case by Mullenberg Designs—are being sold through the Ralston Gallery in Rockport. “Our 30-year collaboration at the Island Institute is something of which we will always be quietly proud,” says Ralston, “but Pairings is, I think, really the ultimate expression of how much the two of us love and understand living where we do. Of course, it’s actually a self- portrait as well as a depiction of those we have known and, in some cases, loved over all these years.”