The Maine Maritime Museum reveals sailors' chests to be portable cabinets of curiousities. 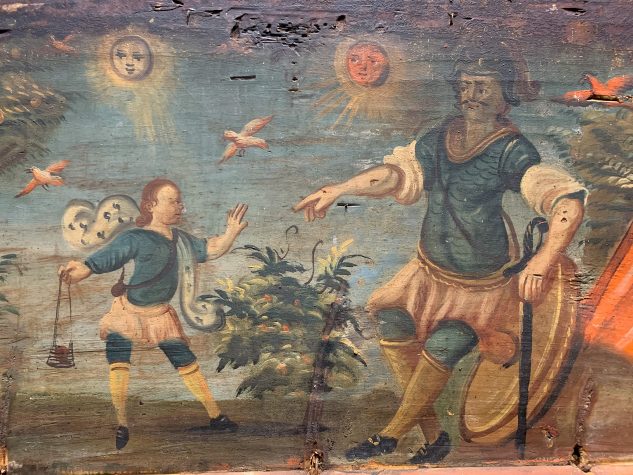 A close up of the David and Goliath Chest's lid; The museum has 45 sea chests in its collection but is only showing a select few. Charlie Burden, who was a founding member of the museum back in the 1960s and a donor of several beloved artifacts, helped choose some of his favorite chests before he died. 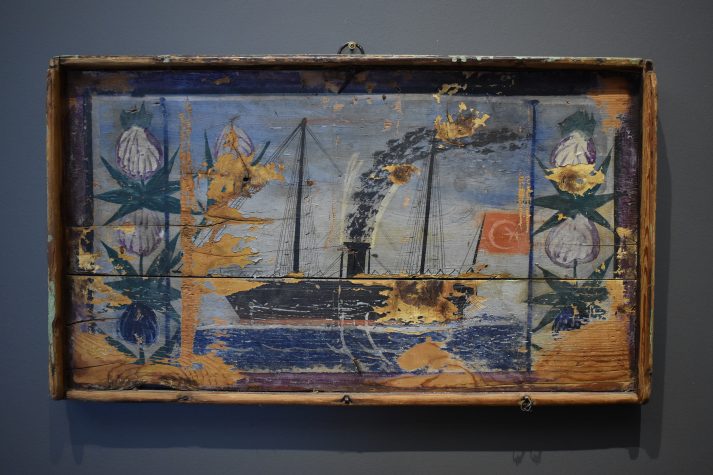 This painted lid depicts a steamer flying the Turkish ensign and is framed by decorative thistles. 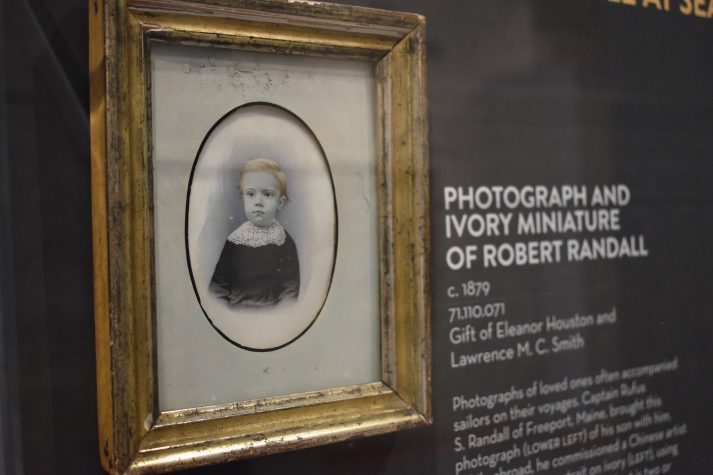 On the back of this ivory miniature portrait of Robert Randall, circa 1879, in Cantonese, the artist wrote "blond hair, blue eyes," a description of Robert's father, Captain Rufus S. Randall of Freeport, surely gave and which couldn't have been deciphered from the accompanying black and white photo. 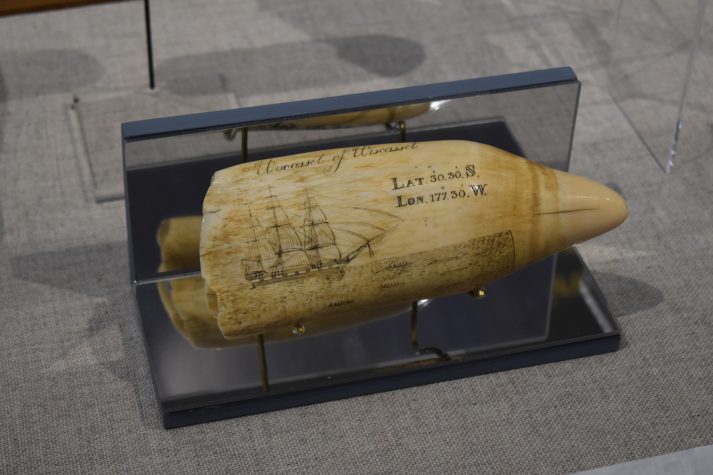 Scrimshaw, engravings done on the bones or cartilage of whales, was a popular pastime aboard whaling vessels; the largest tooth shown here is engraved with a documentary inscription naming the vessel ("Wiscasset" of Wiscasset, Maine) and the latitude and longitude where the whale was encountered: between New Zealand's North Island and Raoul Island—and dates back to 1836. 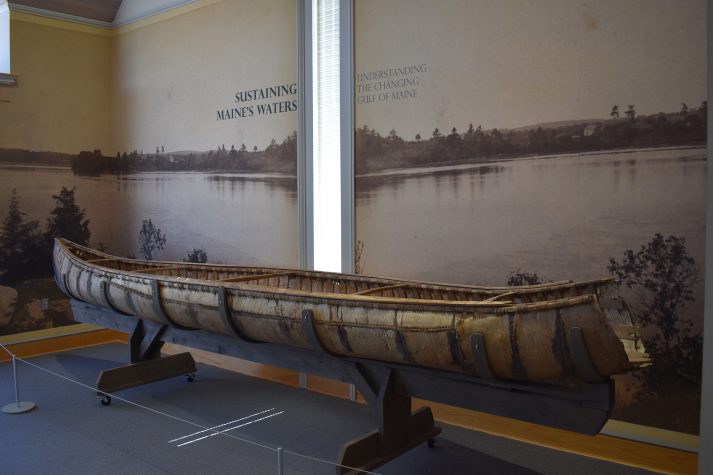 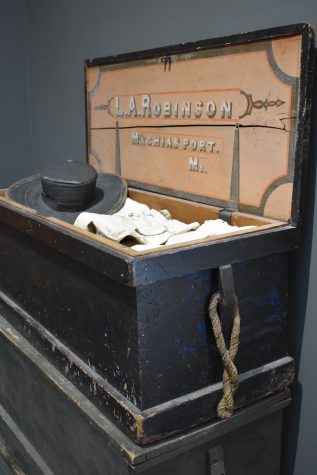 Some of the sailors, such as L.A. Robinson from Machiasport, clearly went to a sign maker to have their names inscribed onto the lid of their chest.

When bringing to mind a sea chest, one’s thoughts may drift directly to the bottom of the ocean floor, a wooden box propped open like a clamshell, golden coins spilling forth, shimmering and forgotten. While some riches may have been uncovered that way, buried inside the bowels of a shipwreck, most of the chests—everyday trunks sailors kept next to their bunks to hold possessions, knickknacks, and souvenirs—were brought safely home.

Thanks to the generous donations of several maritime Maine families, a number of nineteenth-century sea chests are now on display at the Maine Maritime Museum in A Sailor’s Treasure: Sea Chests and Curiosities, which runs through June 14. While the chests themselves are works of art, with their classic wooden cleats and ropework handles, wooden keyhole escutcheons, and even elaborate artwork decorating some of the lids—those more intricate examples likely belonging to a captain or master—the museum puts as much emphasis on what would have been found inside.

Incredible objects from across the world hitched a ride in those boxes as sailors bartered something commonplace for a curio from their travels, and a story to tell upon their return. (What was bought, bartered, and brought back could also say a lot about a person, like Sir James Bisset, a British sea captain who traded his father’s beloved Bible for a Pitcairn coconut purse.) And like in any family, tall tales would be handed down for generations before anyone was the wiser. Take the terra-cotta votive plaque depicting the Buddha, acquired by Captain William Hardie at a temple in Yangon, Myanmar (formerly Rangoon, Burma). Through the display case one can still read Hardie’s writing, which states the plaque is “over 3,000 years old” and taken from a “heathen temple.” “In reality, votive plaques such as this were sold to travelers at major Buddhist religious centers,” says chief curator Christopher Timm. What Hardie claimed as an irreplaceable piece of art was actually more akin to a kitschy lobster buoy.

And while A Sailor’s Treasure is a small exhibition, there are plenty of other intriguing items on display in the museum, like the 1740s birchbark canoe on loan from the Pejepscot History Center in Brunswick. Built by the Wabanaki people, it is confirmed to be the oldest birchbark canoe in the world. And don’t miss out on the museum’s outdoor offerings set on 20 acres along the banks of the Kennebec River in Bath. Late spring and early summer is arguably the best time to visit—the weather is a bit warmer, and the museum is not yet bustling. Book a ride on the Merrymeeting, a 75-passenger cruise boat that takes daily lighthouse and nature cruises (through October), or plan your visit around the Mary E’s sailing schedule. The historic 1906 schooner, originally built in Bath and restored in the museum’s historic shipyard, takes two-and-a-half-hour sails at 4 p.m. on Fridays and Saturdays, June 4 to 26, and at 4 p.m. on Wednesdays, Fridays, and Saturdays from July 2 to September 29.

David and Goliath Chest, a gift from William P. Ripley. 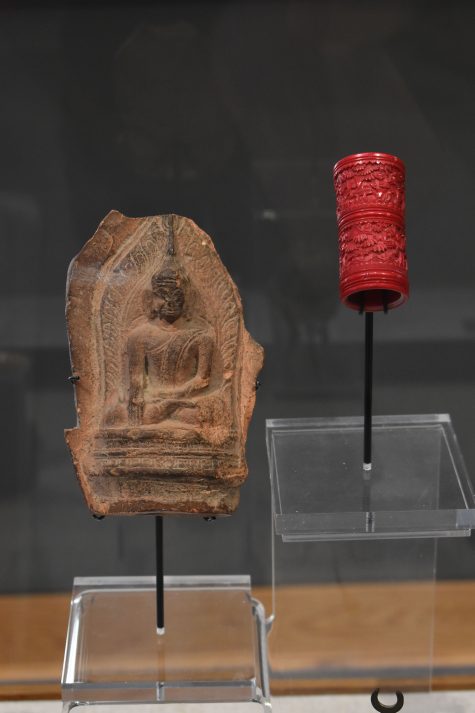 This Buddha votive plaque, a gift from Mary Hardie, was acquired by Captain William Hardie at a temple in Yangon, Myanmar (formerly Rangoon, Burma).