The Collectors & The Pavillion 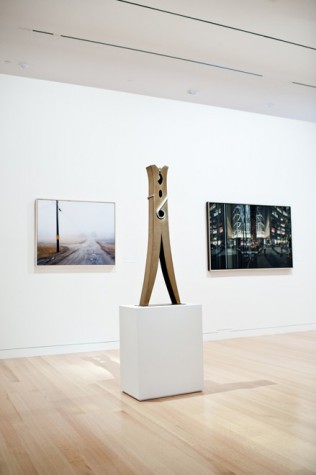 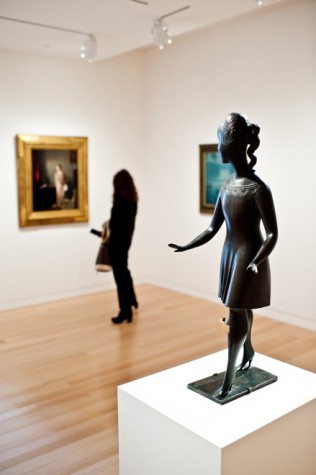 Elie Nadelman's The Hostess, bronze, ca. 1928, is one of the masterworks of American art given to the Colby College Museum of Art by Peter and Paula Lunder. 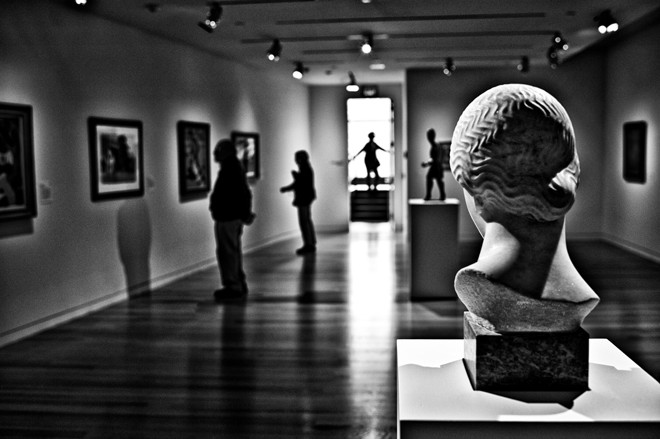 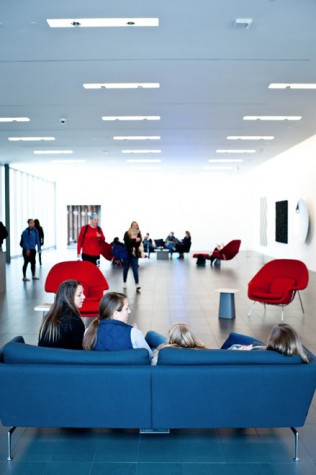 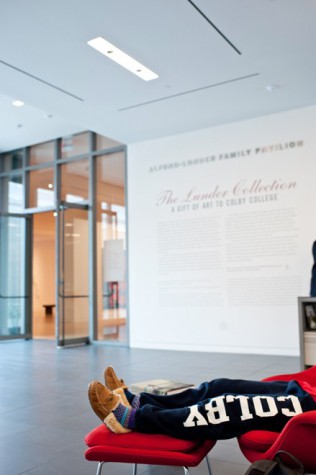 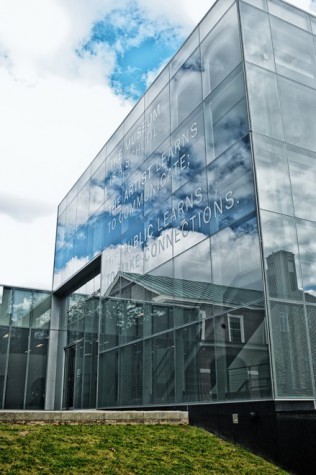 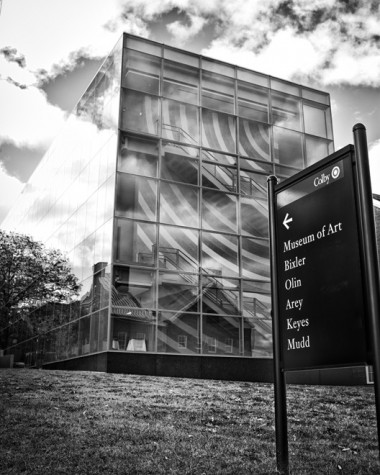 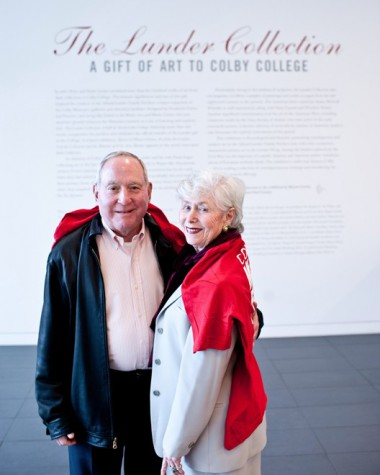 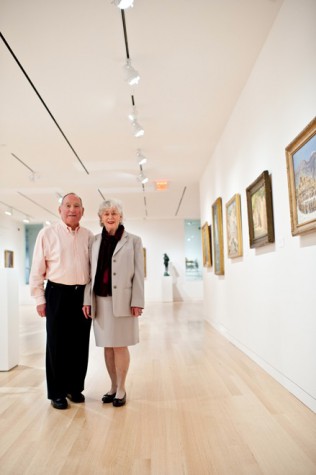 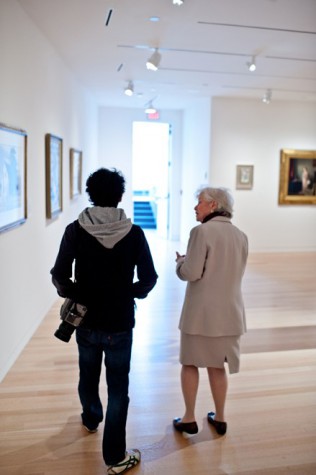 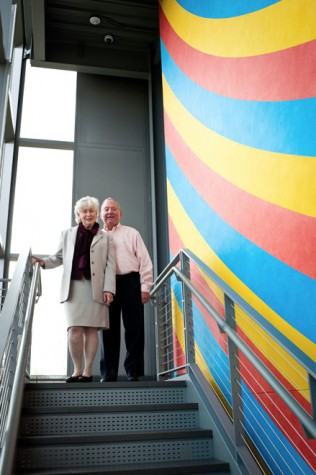 Paula and Peter Lunder visit the new Alfond-Lunder Family Pavilion at the Colby College Museum of Art. The colorful stripes to their left are part of conceptual artist Sol LeWitt's monumental Wall Drawing #559, which stretches three stories and is visible from a distance through a glassed-in stairway. 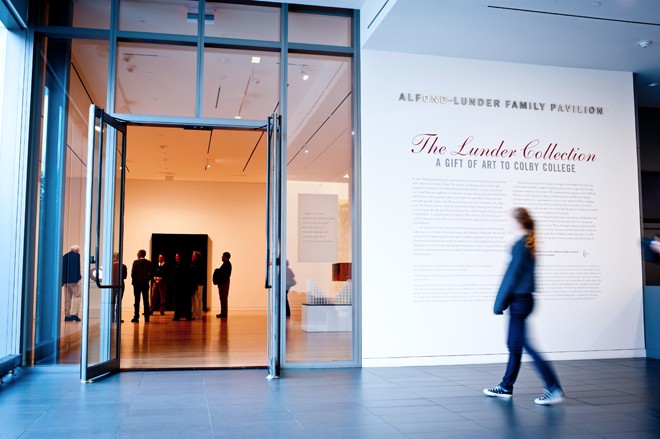 Glimpsed through the entrance to the pavilion, the inaugural exhibition offers highlights of the Lunders' collection, given to the museum in 2007. 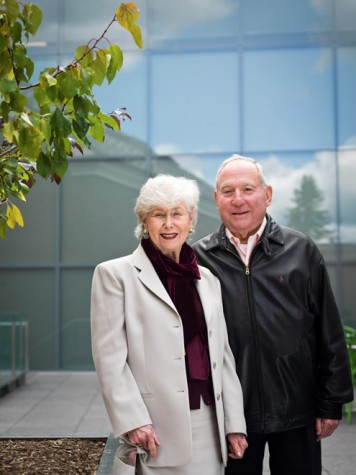 Peter and Paula Lunder build a legacy of art at Colby

Founded in 1959, the Colby College Museum of Art owes its distinguished history and remarkable growth to a number of individuals committed to creating an outstanding venue with a world-class collection on Mayflower Hill in Waterville. One thinks, for example, of James Carpenter, the founding director, who helped produce the groundbreaking Maine and Its Role in American Art (1963), and Hugh J. Gourley III, Carpenter’s successor, who over his 36-year tenure finessed many of the acquisitions—the John Marin and Alex Katz collections, among others—that have put the museum on the map of American art.

To that illustrious roster must be added Peter and Paula Lunder. The Lunders represent the ideal museum benefactors: devoted to the institution for the long term, focused in their passion, generous to a fault. The couple has strong ties to Colby that go back more than a half-century (Peter Lunder graduated from the college in 1956). They lived in Waterville for 45 years while Peter was president of the Dexter Shoe Company. They are truly devoted to place: to the college, city, and state.

The Lunders cut their collectors’ teeth at antique shops around Maine in the 1960s, purchasing collectibles but also paintings. Over time they expanded their sphere of interest and range of resources. “In collecting,” says Paula, “we use every possible opportunity to see, learn from, and enjoy art.” Museums, galleries, private dealers, and auction houses have all played a part in the process, she explains. Their associations with the Colby Museum and the Smithsonian American Art Museum, in particular, have had a major impact on their collecting, as have interactions with fellow collectors they have met along the way.

The Lunders’ gift of 500 works of art to the Colby Museum in 2007 was a game changer. Already recognized for its formidable holdings, the museum gained a body of art that both firmed up and expanded the diversity and stature of its collection. Prime examples of American art spanning three centuries, a trove of Whistler’s work, and a magnificent assortment of Chinese ritual and mortuary pieces are among the Lunders’ treasures gifted to the museum.

A selection from this momentous acquisition is on view through June 8 as part of the celebration of the opening of the Alfond-Lunder Family Pavilion, a stunning addition to the museum designed by the Los Angeles architect Frederick Fisher. Director and chief curator Sharon Corwin and her team have done a superb job of installing the work in the spacious galleries. Whether it’s Maya Lin’s Pin River—Kissimmee (2008), Jacob Lawrence’s Builders #1 (1968), or Richard Estes’s Mt. Katahdin, Maine (2001), each piece is given plenty of space even as it sets off visual conversations with its neighbors.

Even those familiar with the collection from prior showings will enjoy the new presentation—a kind of “greatest hits” with a number of surprises. One out-of-the-ordinary inclusion, at least for a Maine museum, is a room devoted to artists of the American Southwest. This superlative collection of twentieth-century painting and sculpture takes you to a different place, both geographically and aesthetically. It offers a welcome escape from a wintery Maine day—and for some visitors, no doubt, a respite from the conceptual goings-on elsewhere in the complex.

Paula Lunder notes that her husband admired Southwestern art from early in their collecting lives. Guided by dealer Steve Rose from the Biltmore Gallery in Scottsdale, Arizona, and Los Angeles, Peter obtained prime examples of some of the masters, including Victor Higgins. While originally not as taken by this art as her husband, Paula came to love it, “as it depicts,” she notes, “a bygone era but an important time in American history of the West.”

Some of the pieces in the Lunder collection have already achieved “old friend” status in the years since they were given to the museum. A favorite of many visitors is the Duane Hanson sculpture Old Man Playing Solitaire, 1973, a hyper-realistic rendering of the artist’s father seated at a card table, which was on view earlier in the current show.

The acquisition of the Hanson piece illustrates the Lunders’ evolution as collectors. Originally interested in traditional sculpture, they grew to admire the work of certain contemporary artists. After viewing several Hanson pieces, including Woman Eating (1971) in the Smithsonian American Art Museum, and learning more about the artist, they decided to purchase the card player.

Some years ago during a visit to the museum with an art history class from College of the Atlantic, I remember the students did double-takes as they walked past the lifelike figure. Later, they carried on a lively discussion of what made this seemingly perfect replication of a human being a work of art and not a loan from Madame Tussauds. That’s the beauty of this collection: the provoking and the pleasing that occur as visitors confront the dynamic spectrum of American and world art.

According to Paula Lunder, Colby College President William Adams encouraged the curators to work with professors “to integrate the museum more closely into the curriculum.” She is pleased with the way Lauren Lessing, Mirken curator of education, has expanded the opportunities for learning in the museum.

Asked if there is a particular piece the couple misses, Paula admits that they pine for all the art that has been a part of their lives over the years. At the same time, she expresses their shared delight that the students at Colby and, more broadly, the people of Maine may enjoy the collection “and perhaps gain a degree of pleasure from selecting their favorites.”

The new pavilion, says Paula, was “beautifully created” through a collaboration among curator Corwin, architect Fisher, and President Adams. She and her husband are doubly thrilled to be sharing the success of the new space with the Alfond family. Harold and Bibby Alfond were the Lunders’ mentors, both personally and professionally, when the couple first moved to Waterville. According to Paula, the Alfonds showed them “a marvelous way to express our appreciation for living in the state of Maine!”

With the addition of the pavilion, the Colby College Museum of Art has reached a scale that places it in the category of museums where visitors can get lost in the galleries. Wandering through room after room, you become immersed in the art and lose track of the outside world. It’s what you might call “large museum syndrome,” an experience that, paradoxically, art lovers cherish.

The Alfond-Lunder Family Pavilion has earned Colby College additional bragging rights: its museum is now the largest in Maine. At the same time, the new building and the expanded collection help to solidify the state’s overall reputation as one of the premier art destinations in the country.

The Lunders will continue to be a part of the rich dynamic of art and education at Colby. They remain avid collectors; as Paula notes, “Once we began collecting we knew it was a lifetime passion, one which we continue to enjoy today.” She and her husband look forward to the treasures they may find in the future that will “enlarge our vision and knowledge.” They are building on a remarkable legacy—and a very special gift to the people of Maine.