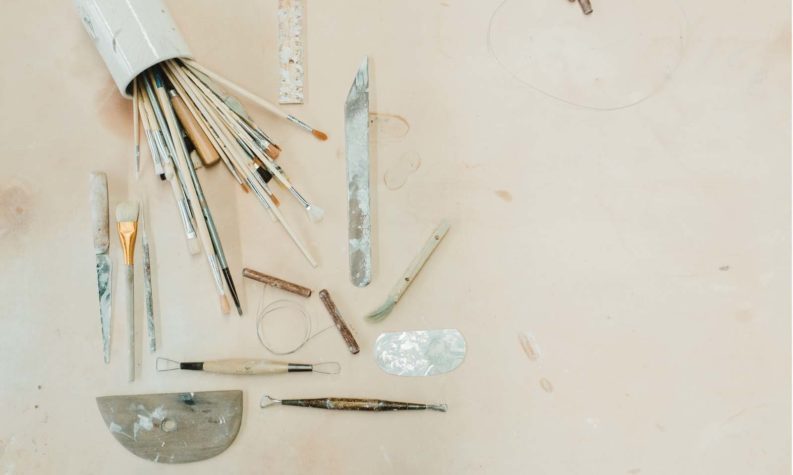 Kristen and Joe Camp met in their hometown just south of Atlanta, Georgia, and moved to Maine in early 2014 to help establish a new location for their church. They intended to stay for two years, but have fallen in love with their adopted state. 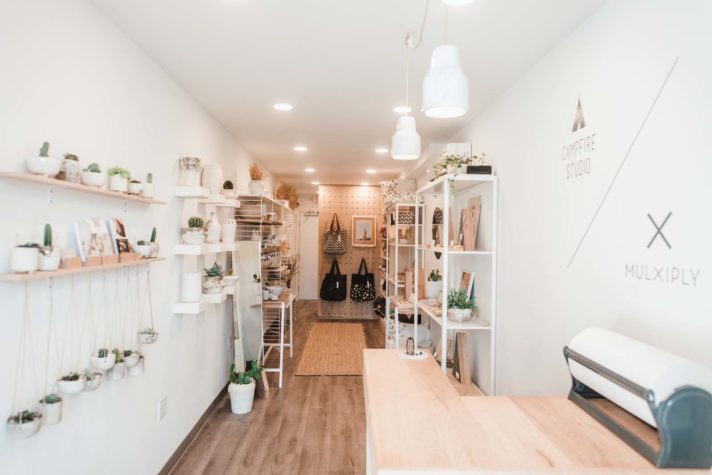 A wide variety of products available from Campfire Studios and Mulxiply in Portland. 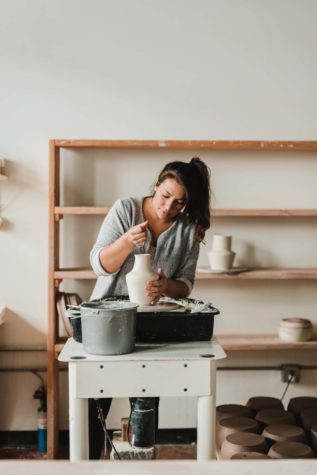 Kristen works at a pottery wheel in the Campfire Studios workshop in Westbrook. 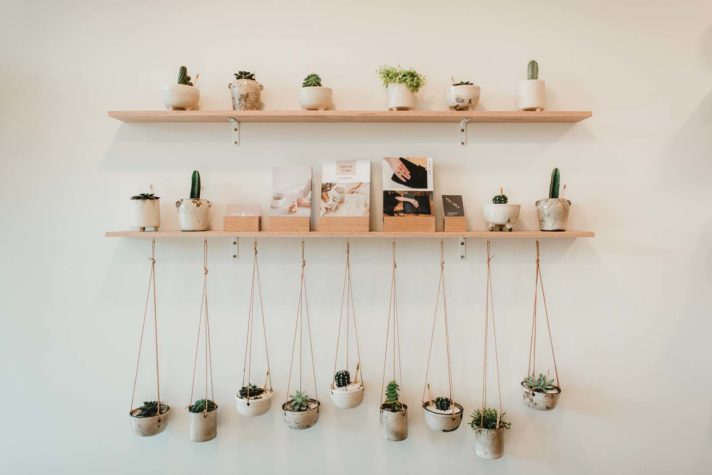 A display of raku planters at Campfire Studios’ shop on Washington Avenue in Portland. 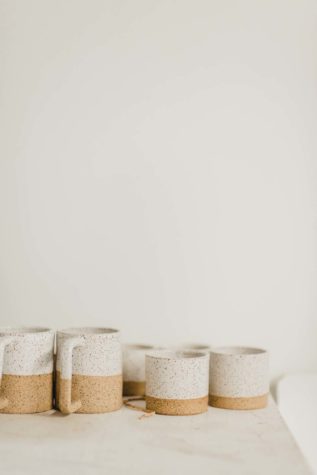 Stoneware mugs are handdipped in a white speckle glaze.

One of civilization’s most ancient arts—making pottery—is being practiced in a thoroughly modern style at Campfire Studios in Westbrook. Kristen and Joe Camp make sleek, functional pieces glazed in light neutral tones, making them equally at home in traditional and contemporary settings. The Camps create each and every item by hand and sell their pieces at their shop on Washington Avenue in Portland or online. Their business name is a serendipitous blend of their own surname and the dual meaning of “fire”—the process used to make pottery and the communal hearths humans have gathered around for centuries.

The new shop is a long, narrow, yet bright space in the Black Box building, which was created from shipping containers and which Campfire Studios shares with contemporary accessories boutique Mulxiply. Campfire’s offerings include hanging planters; one-of-a- kind raku vases; stoneware mugs, plates, and bowls; cheese boards; pitchers; and serving bowls and platters. “What inspires us are Danish and Japanese-style ceramics,” says Kristen. “We’re really into the dinnerware collection right now, and serving pieces are one of the big things we’re looking to expand.”

Both from Jonesboro, Georgia, just south of Atlanta, the Camps met at their Southern Baptist church. Kristen moved back to the area after graduating from Bob Jones University in Greenville, South Carolina, with a degree in three-dimensional studio art concentrating on ceramics. Joe was still in college studying accounting. “I had taken a liking to her, so I thought a good way to get to know her better would be to take a ceramics class as an extra credit,” he says. Eventually they married, and ten months later, in February 2014, the Camps moved to Maine to help establish a new location for their church in Portland. They settled into an apartment in Westbrook, and Joe got a job in the accounting department of a manufacturing company, while Kristen began working at Portland Pottery, giving her a chance to work on her craft. Their own business got its start at the Portland Farmers’ Market, where they met Carolyn Snell of Snell Family Farm in Buxton, who commissioned Kristen to make 20 pitchers for Mother’s Day. Soon they had their own booth at the market and began doing pop-up shops at West Elm and Anthropologie in Portland. In short order the Camps were looking for studio space at the Dana Warp Mill in Westbrook, where they opened Campfire Studios in December 2016. But their rapid growth had a downside. “We were building up the wholesale scene and realized that’s not where we wanted to be,” says Kristen. “We decided we were going to cut back this spring, in March, which was right about the time we saw the sign for the retail space in Portland.”

Sharing the shop with Mulxiply gives the Camps the opportunity to spread their retail wings in a way that’s manageable and affordable. The shop is open Wednesday through Sunday, 11 a.m. to 7 p.m., and the couple shares staffing responsibilities with Mulxiply owner Tanja Cesh and one other part-time employee. The Camps also have a few helpers at the Westbrook studio, where Kristen makes most of the pieces that are thrown on a wheel and Joe creates the hand-built items. “We like the process of actually touching every piece we make,” he says. “Most of our dinner plates, salad plates, and cheese platters are all hand built; I use a slab roller to roll the clay out flat, and I manually manipulate it into different shapes.”

Kristen uses the Japanese raku process for decorative pieces such as vases and planters (since raku-fired pottery is not food safe). The glazed pieces are fired to a certain temperature in the kiln, then carefully removed and placed in metal trash cans with combustible material, such as wood chips. “The smoking and smoldering that happens inside the can creates the metallic effect on some of the pieces, and the crackle is from the thermal shock,” she says. “It’s always unpredictable, and sometimes that’s the best thing about it.”

When the Camps first arrived in Maine, they were expecting to stay two years before heading back to the South. “After the first year, we said, ‘I think we’re going to be here long-term,’” says Kristen. “I feel like people here really care about where they source their stuff from,” says Joe. “It would be hard to go back home and do what we do here successfully.” They came to Maine to help build a church and ended up building a new, creative, and connected life for themselves, which they see as a divine gift. “I think there are so many examples that prove art is something that God loves, and it’s all about how you conduct your business and how you use it to love other people and share your gifts,” says Kristen. “Everyone was created for a purpose; ours is to make beautiful things that are useful and that bring joy.”

Kristen and Joe Camp’s tips on using and gifting their pottery: 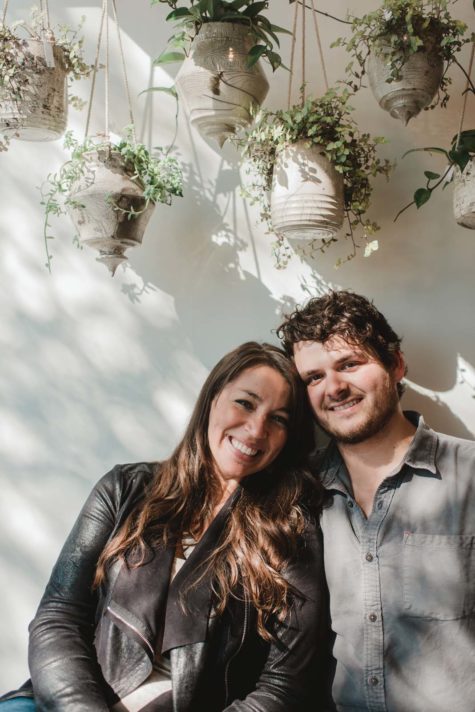 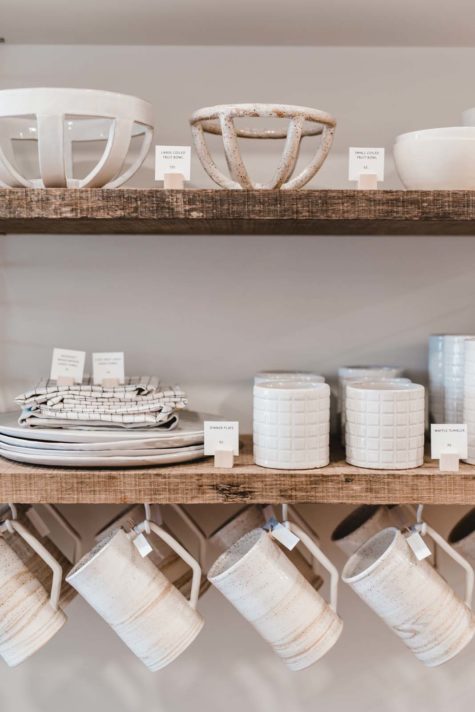 Shelves at the shop hold dinnerware and serving pieces including, from top: coiled fruit bowls, plates and waffle mugs, and marbled sandstone mugs. 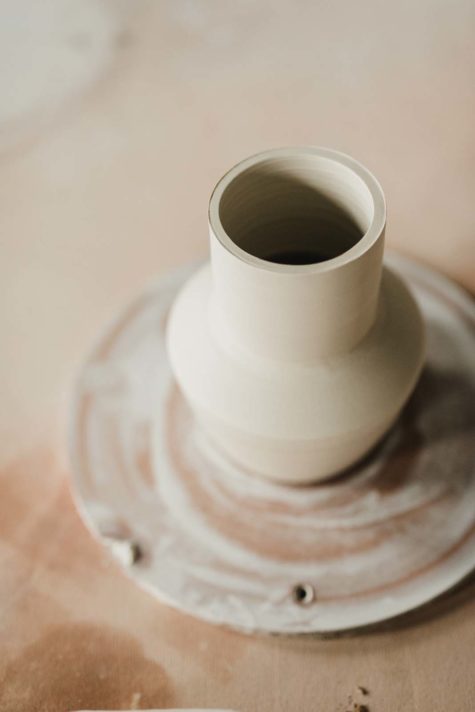 A vase takes shape on the wheel.