At Folk in Kittery, Amelia Davis mixes fashion with fun and functional objects 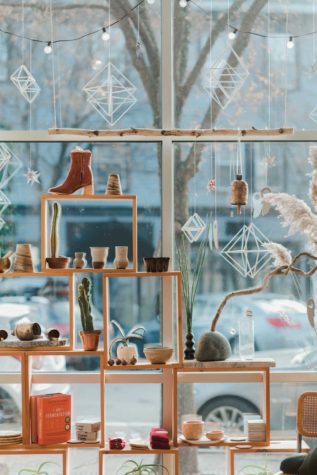 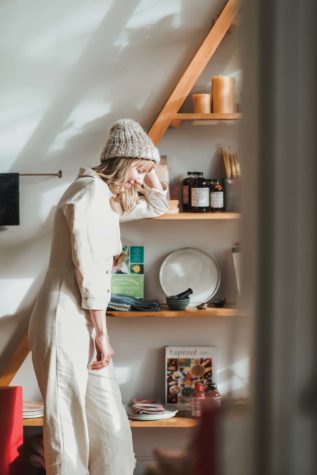 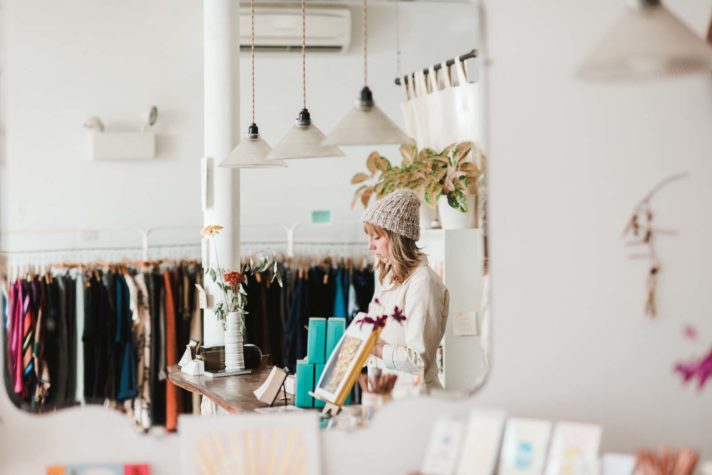 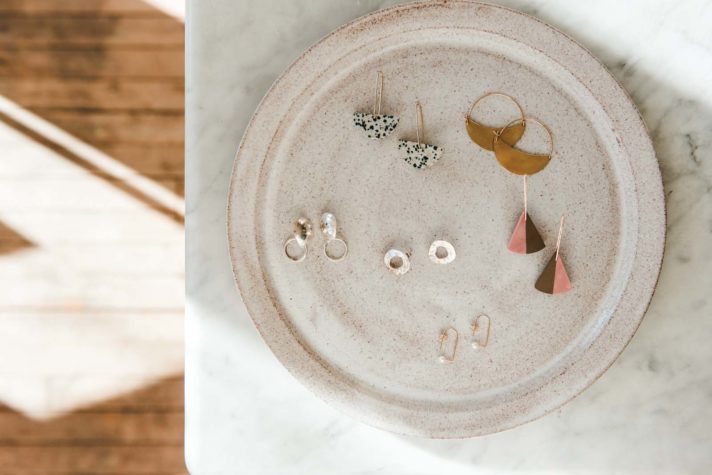 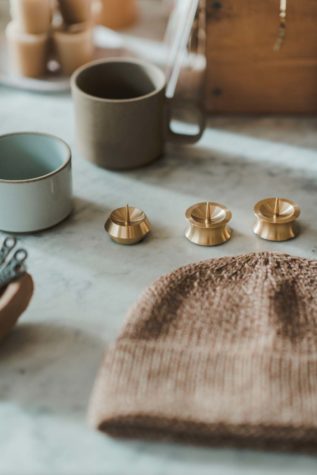 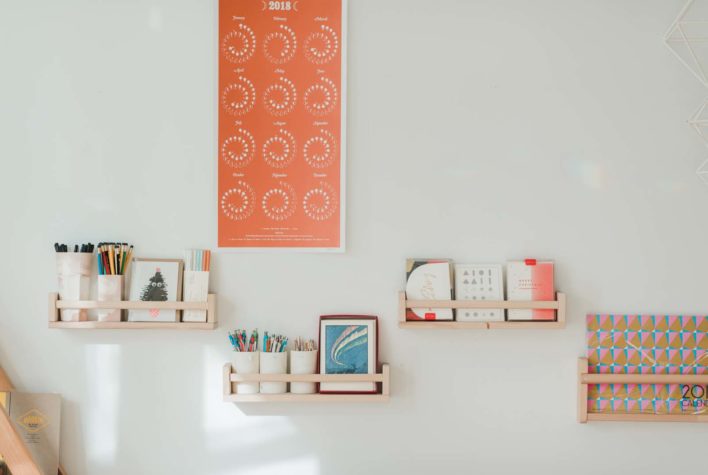 Calendars, cards, and writing implements for stocking the stylish desk.

In an age when we are urged to minimalize, to pare down the design of our rooms and the contents of our closets, walking into Folk in Kittery Foreside brings to mind the famous William Morris quote: “Have nothing in your houses that you do not know to be useful or believe to be beautiful.” On a marble-topped table in the center of the shop lie a camel-colored leather wallet, a neatly folded creamy white alpaca cardigan, and a precisely arranged display of pocket knives and corkscrews, their handles inlaid with kaleidoscope-like designs in colored wood. On a nearby shelf, beeswax candles, wooden spoons, and marbled stoneware vases share space with apothecary bottles and boxes of Douglas fir spring tip tea. Along one wall, flat glass cases hold contemporary jewelry and a clothing rack includes a pair of velvety, burnt sienna corduroy pants I can’t resist reaching out to touch. In fact, nearly everything at Folk invites tactile interaction. While the shop itself is small and there is a spare quality to the arrangement of merchandise, there is also an astonishing range of texture: linen, wood, metal, leather, paper, wool, and stone. “People will come in and spend two hours picking up everything in the store, which is just fine,” says owner Amelia Davis. “We may have special things, or may treat them sort of preciously, but I don’t want them to be inaccessible.”

When Davis opened Folk the week before Thanksgiving in 2013, hers was the second business to move into the block-long, former Masonic Hall that is now the anchor of Wallingford Square. “Lil’s Cafe was the only other thing in the building and the employees would always come in for a break and chat with me,” Davis says. There’s a clear sense of style at Folk, but also an atmosphere of approachable serenity, buoyed by Davis’s purposeful merchandising and also by the wide range of prices. “I maybe have a little more of an urban aesthetic, which I try to blend with what fits here,” she says. “For me, the display is just as important as the object that’s going on it, and I think it might help the customer determine how an item could look in their home.”

Having grown up in Portsmouth and Kittery, Davis has a good idea what fits in her hometown, and how to appeal to both locals and visitors who stream into Kittery from Boston and beyond year round. The daughter of a former plant nursery owner and an architect, she studied printmaking and painting on the West Coast—at California College of the Arts in Oakland, and Evergreen State College in Olympia, Washington—followed by a stint in New York City, before moving back to Maine. She went to work for her mother, Ellen Mitchell, at the Pick of the Planet, Mitchell’s former wholesale and retail business specializing in tender perennials and unusual tropical plants. It was just her second experience in retail. “People used to tell me, even when I was young, that I should open a shop, but I never really thought about it until I saw the space in Wallingford Square,” Davis says. “I always had creative friends—artists and makers—and I knew I wanted to work for myself and to support people doing honest work with their hands.”

Before she opened the shop, Davis produced a small line of leather goods and jewelry called Kin of Kin. The name, Folk, reflects this earlier project as well as the connections that have always been significant in her creative life. “When I first opened, 80 percent of what I had came from people I knew,” Davis says. While she now sources some of her products at trade shows, “There’s still a lot I hear about through word of mouth.” Her original plan for the store included selling items of her own design, which proved more complicated than she expected given the challenges of running a business as a sole proprietor. Now that her mother is retired, however, she serves as Folk’s “resident seamstress,” stitching up small items such as balsam sachets and soft toys. Together with a friend, Davis also designs an annual calendar featuring the phases of the moon.

Like the corduroy pants I fell for at first touch, Folk’s apparel collection focuses on well-made, modern, and versatile pieces in organic cotton, linen, and merino wool, as well as a small selection of jeans. Clothing is a particular passion for Davis, who sources it mostly from independent design houses in New York and Los Angeles such as Ilana Kohn and Ace and Jig. “I love that clothing manufacturing is coming back—I think it’s important to have it in the United States,” Davis says. She emphasizes that while the pieces are not inexpensive, they can be the foundation of a thoughtfully put together wardrobe. “I’m trying to educate people that you can wear a nice sweater with some vintage jeans, and that’s a way you can incorporate this kind of clothing into your life,” she says. “You just buy a couple of pieces a year, and then you have them for many years; they are not something that’s going to wear out.”

Davis’s style may be far removed from Morris’s romantic flowers and ferns, but the nineteenth-century designer would have approved of her creative spirit, the strong work ethic she attributes to her parents, and her philosophy in both choosing items and curating her shop. At Folk, the useful and the beautiful are two halves of a well-ordered whole. 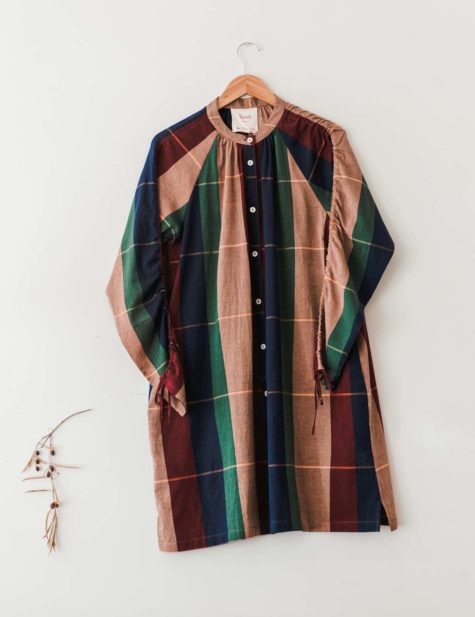 The Cy shirt dress in handloomed cotton is made sustainably in India for Seek Collective. 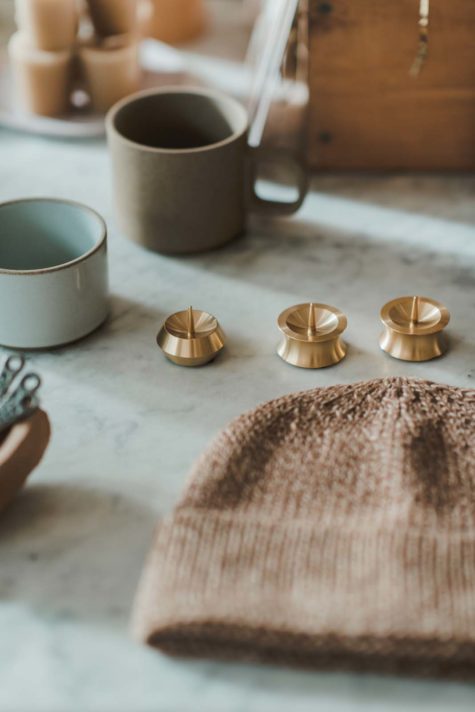