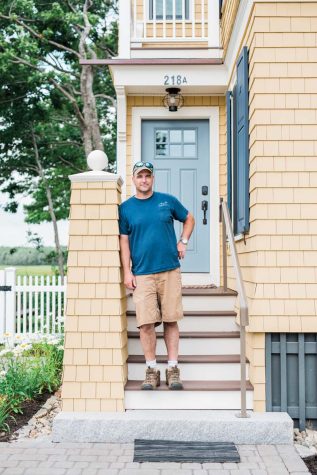 Home builder Jonathan Trudo on the front steps of one of his latest projects, a rental cottage across the road from Goose Rocks Beach in Kennebunkport that he built for longtime clients. 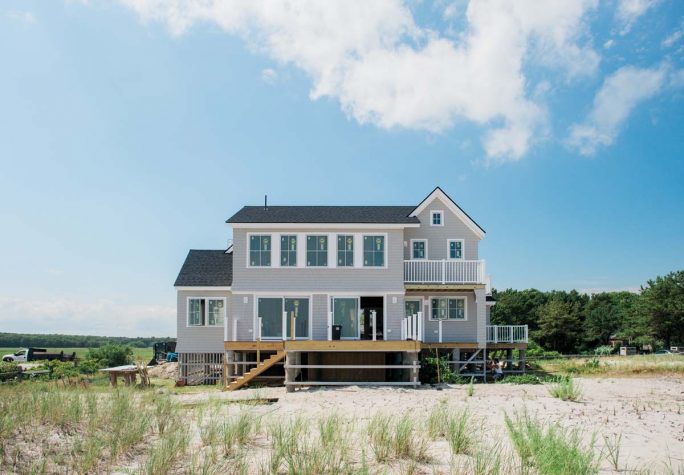 Trudo recently completed this four-bedroom, four bath beachfront home in Kennebunkport for the Garvey family. The large deck now has a cable railing and latticework underneath. 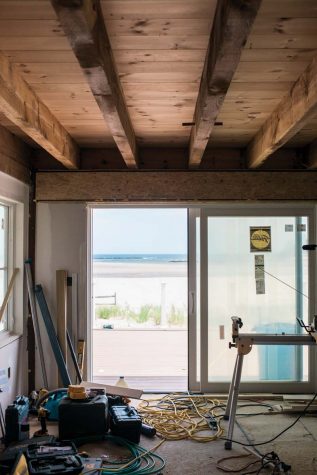 The ceiling in the living room of the Garvey home on Goose Rocks Beach was part of the original structure and will be painted white when the space is finished. 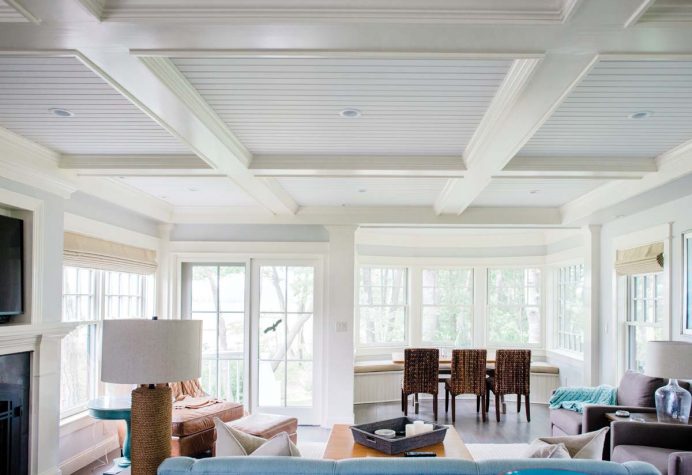 The open main floor of the rental cottage boasts a coffered beadboard ceiling, a curved dining banquette, and to offset its narrow footprint, plenty of light through windows looking out to a salt marsh. 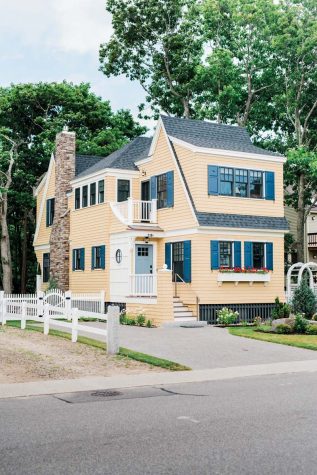 A fieldstone chimney, porthole window, shutters with seagull cutouts, and a shingled post topped with a finial are among the exterior details that give the cottage its vintage-style charm. 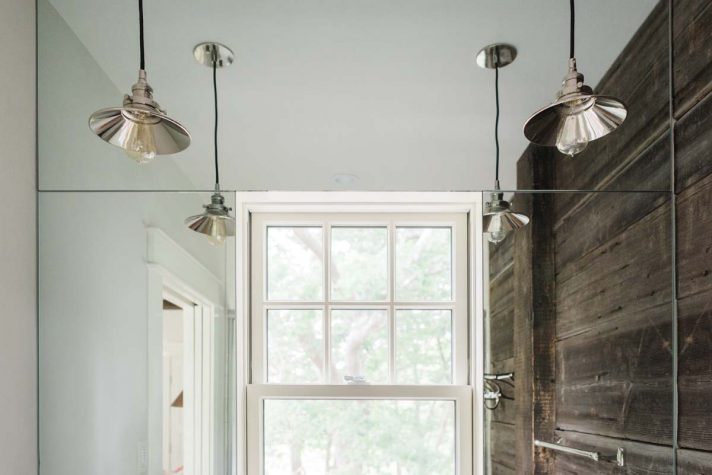 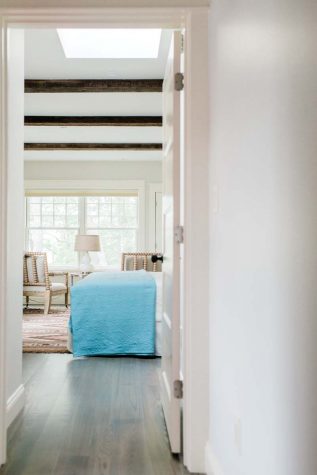 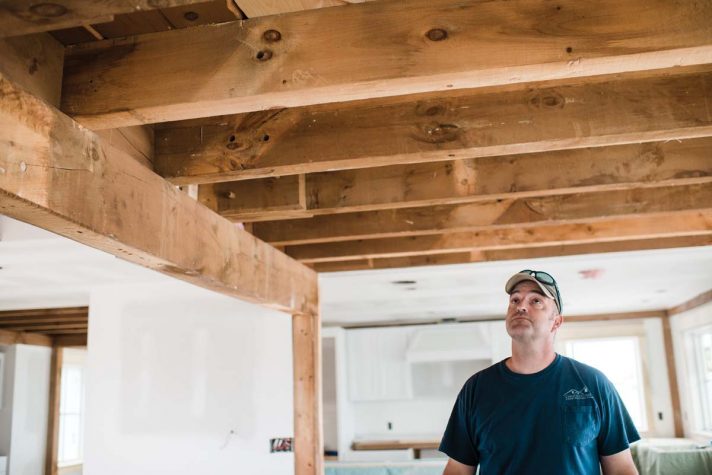 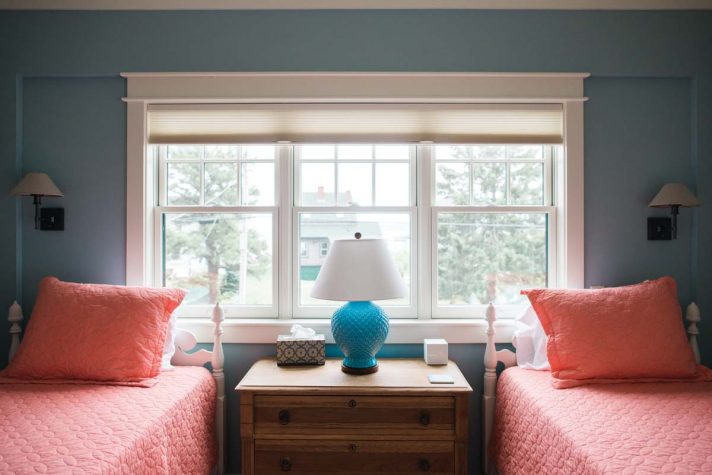 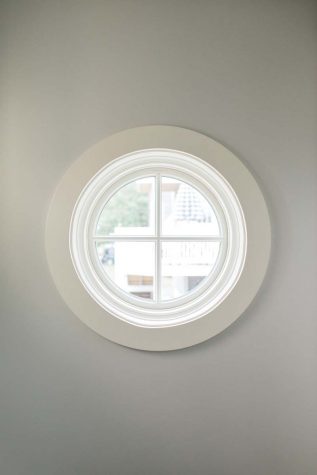 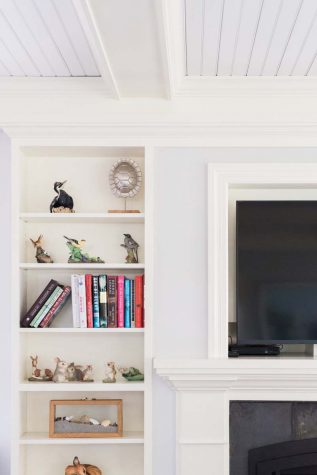 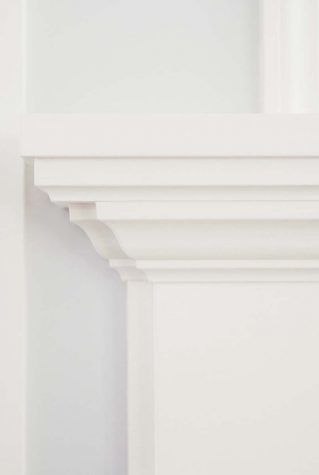 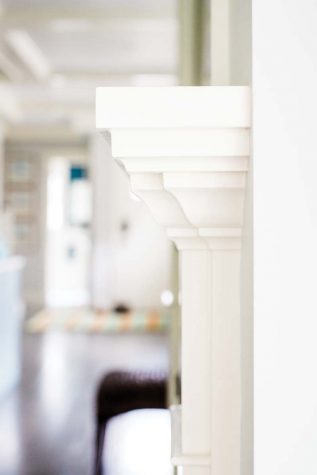 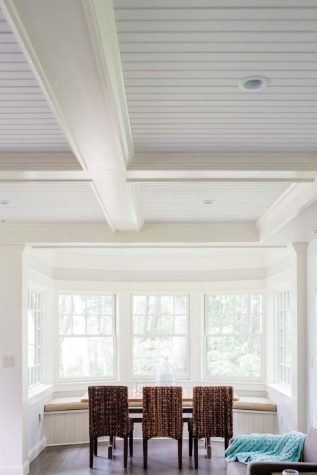 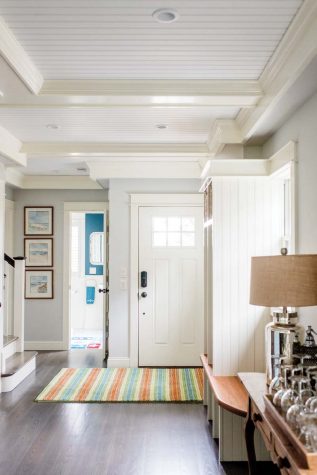 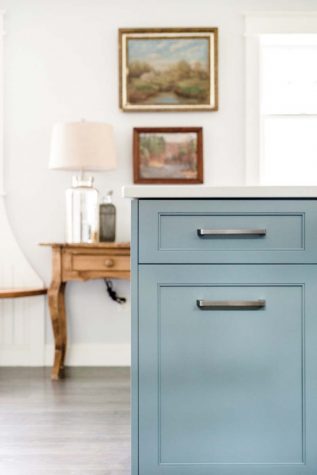 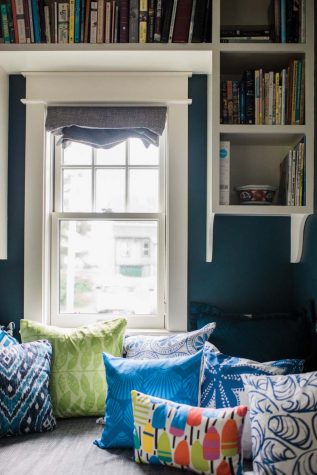 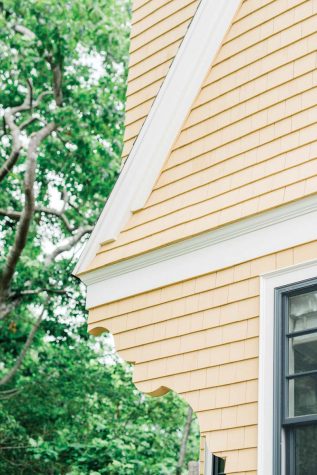 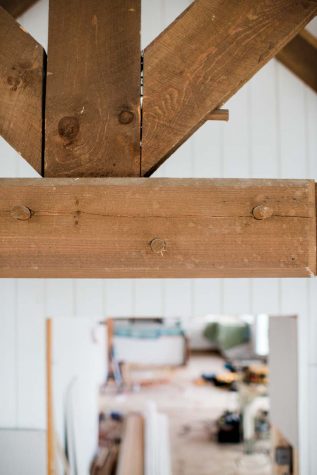 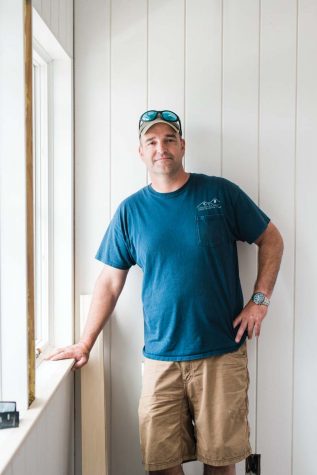 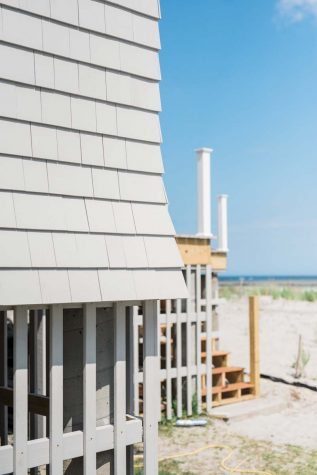 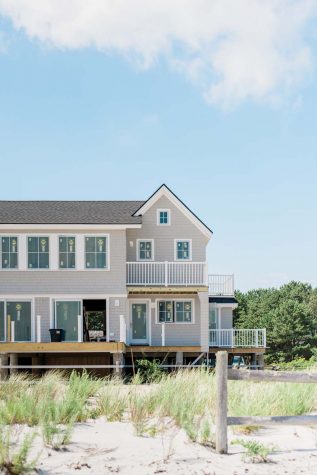 For builder Jonathan Trudo, fine homes and happy clients are his legacy

Jonathan Trudo works in one of the most picturesque places in Maine, if not the entire country. His daily view is of the white sand and blue-green water of Goose Rocks Beach in Kennebunkport and other communities along Maine’s southern shoreline, where his job is usually to build homes that take full advantage of the scenery. And yet the owner of Creative Coast Construction is more focused on what’s inside those homes— the well-crafted details and fine finishes he is known for—than the seascape outside. “I’ve been on the beach maybe four times since 1989,” Trudo says with a chuckle. “Seriously, I’m not a fan of sand. I just like building in the community.”

Trudo grew up in the construction business, working with his father first in Weston, Vermont, then in Kennebunkport, where the family established Shoreline Builders in 1989. He went out on his own in 2013, and still works with many of the subcontractors he came to know and trust through his family’s business. “Even the plumber is the son of the guy we used to work with years ago,” he says.

Trudo and I meet at one of his latest projects, a cottage- style home built as a rental property on a compact lot on Goose Rocks Beach. Between the sand and a salt marsh, the idyllic site matches the charming house, which is loaded inside and out with eye-catching details. Creamy yellow shingles flair out where they meet the foundation, royal blue shutters boast seagull cutouts, and a shingled column topped with a round finial makes a statement next to the front steps. Inside, the ceiling of the open first floor is coffered, adding depth and dimension to the narrow room.

The limited width of the house offered a number of design challenges. Just inside the entrance, built-in cubbies and a polished wood bench take the place of a closet; the plans called for the cubbies to flank a window, two on each side, but Trudo knew the homeowner had a piece of furniture she wanted to place along the wall on the far side of the window, so he redesigned the storage units to accommodate it. At the top of the staircase, a linen closet had to be relocated to its own little landing to make better use of the tight space. A first-floor bedroom—one of four in the house—was supposed to accommodate a full-size bed. With the help of Peterson Design Group, Trudo convinced his client to swap it for a built- in daybed with storage drawers. The cozy room now works as a quiet spot to read or watch TV as well as a single bedroom. “I love problem solving,” says Trudo. “There’s always a little figuring that needs to be done, and I like that. Once I start to know the customers, and what their likes and dislikes are, it doesn’t take me long to start putting things together.”

John and Kathleen Cochrane reached out to Trudo last fall after the builder they originally contacted to remodel their Kennebunk home wasn’t responsive. “My wife called Jonathan, and he called us back in five minutes,” says John. “We met him at the house shortly thereafter; the first thing he told us was a wall was cracked. He went into the crawlspace and looked around at everything.” The Cochranes, who live in Hingham, Massachusetts, quickly bonded with Trudo. “Having a contractor you can trust and who is very attentive is important to us, especially not living here,” says John, adding that Trudo also has “really good taste.” He and his crew started in January on the project, which ended up being much wider in scope than anyone expected. “We were just supposed to do three bathrooms and a kitchen, but the house had some structural problems and we ended up gutting the whole place—all new electrical, plumbing, siding, windows, roof, and trim,” says Trudo.

The Cochranes had sold their previous summer home in Kennebunk and hoped to be in the new one by June. Because of the extra work, they stretched it to July Fourth weekend. John gave Trudo the hard deadline five weeks before the holiday, when his crew had just finished drywalling. “I called all the subs and said, ‘Here’s the deal, we gotta go for it,’” says Trudo. “I think the painter was the one who was going to have a coronary.”

They pulled it off, working 12-plus hours a day, seven days a week. On Thursday, June 30, the Cochranes stayed at the Seaside Inn across the street while Trudo got the Certificate of Occupancy from local construction officials. Over the long weekend, the furniture was moved in. “There were stretches when there were 13 trucks and 16 people here, and as always Jonathan managed it,” says John, noting that, despite the mad dash, the work is “unbelievably high quality.” He adds, “The trim work in this house—and there’s a lot of it—is phenomenal. Even if you look at it up close, you don’t see any gaps. It’s seamless.” Trudo, who calls himself a “workaholic,” wholeheartedly embraced the beat-the-clock challenge. “The mechanical guy said, ‘You guys are never going to be done,’ and I said, ‘Don’t say never, especially to me,’” he says, his eyes narrowing with bemused defiance.

“I’m obsessed with construction and work,” Trudo says. “My wife knows that I’m nuts and that I work a little too much. Hence why I don’t have kids; my houses are my babies. I’ve got projects I’ve done all up and down this beach and I can still remember what’s in the walls.” He points to his head: “It’s all right here.” 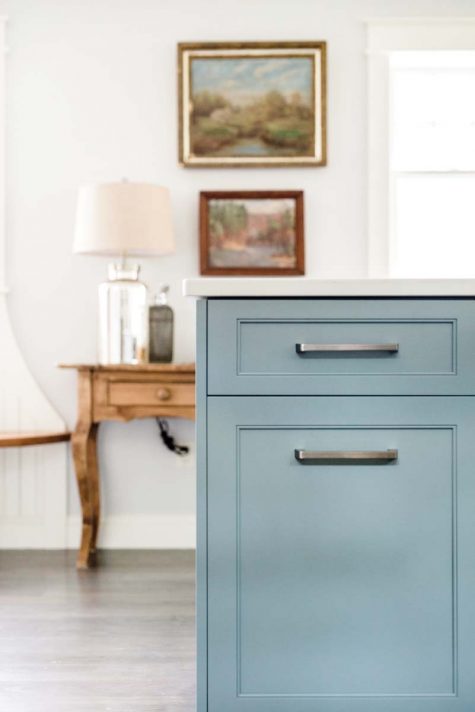 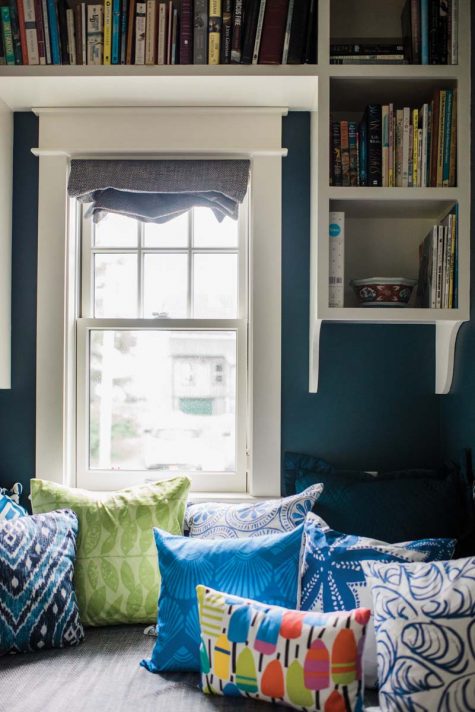 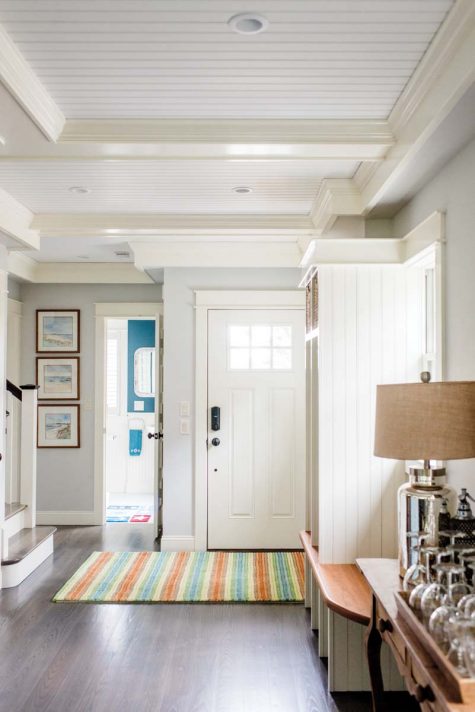