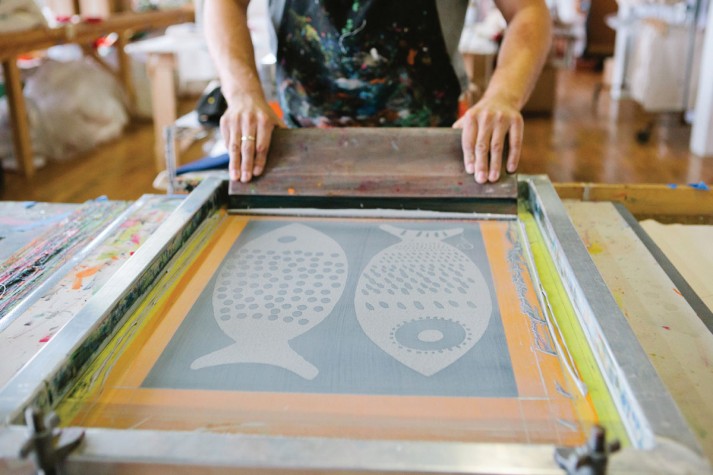 At Erin's studio space in the Dana Warp Mill in Westbrook. 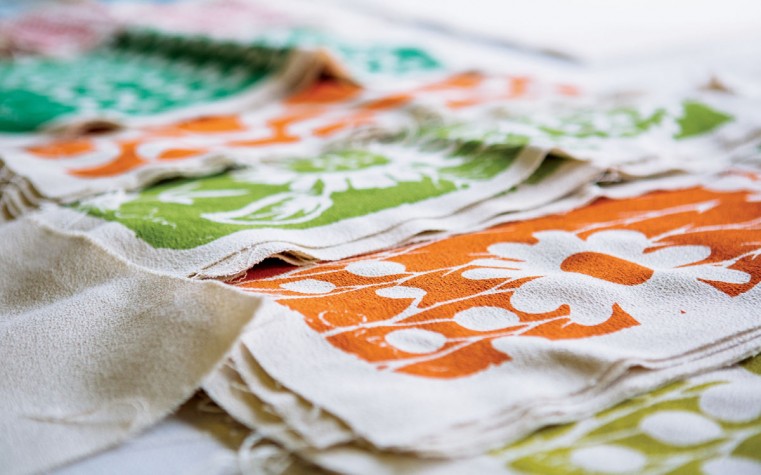 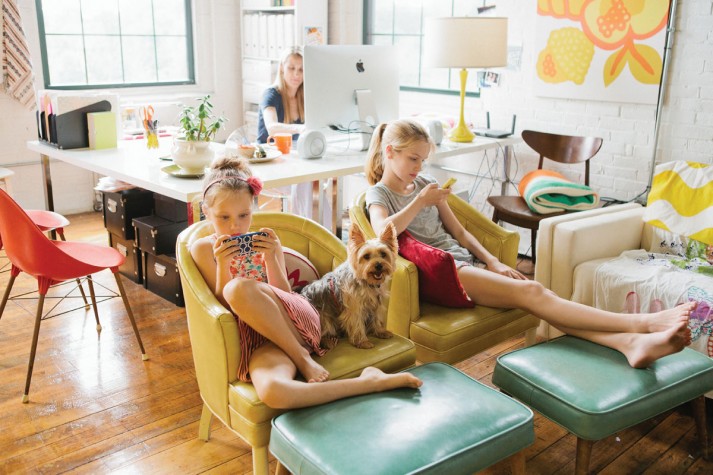 Flett’s daughters, Aryana and Breshia, settle in to the artful studio space while Flett works in the background. 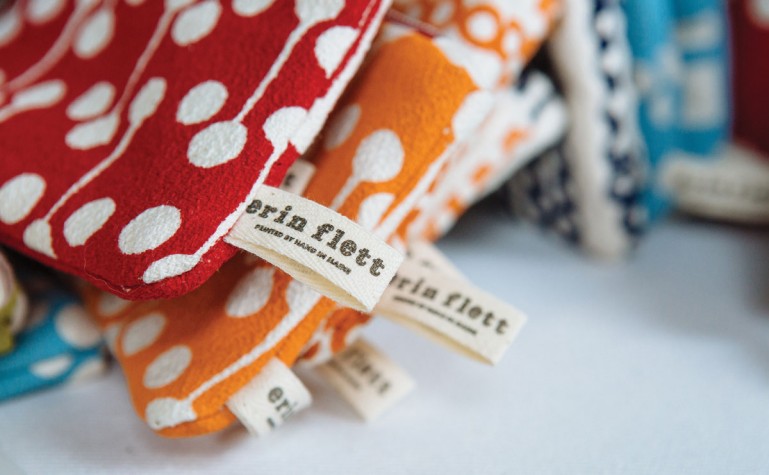 Textile designer Erin Flett and the making of a beautiful brand

Textile designer Erin Flett and I are sitting in her studio space in the Dana Warp Mill in Westbrook. One part of the cavernous 1,400-square-foot room is roughly divided into a corner office and a kind of living room, where her daughters Breshia, 11, and Aryana, 7, lounge on couches reading, playing games on iPads, and humming to themselves. The rest of the room—most of the room—is work space, striped with long tables for printmaking, storage for her textiles and home goods, racks for hanging fabrics and bags, cupboards for tea cloths and pillows. Her textiles and home products are cheerful but sophisticated, and made of materials and textures of such an obvious high quality you’ll cross rooms to touch them.

Behind the lovely surface of this studio space there is a story. One of the things I appreciate about Erin Flett is her willingness to hash it out, to talk process and pitfalls along with all of the positives. How did she get to this place on the river, surrounded by artful products of her own making; to the pages of magazines ranging from Country Living to O, The Oprah Magazine to Real Simple; to selling her wares on sites like One Kings Lane and Serena and Lily? Earlier in the afternoon, I got what felt like a peek into her past, and her myriad sources of inspiration, when she showed me around the 1,700-square-foot space across the dark hallway, which she also rents. This space is currently filled with finds from antique stores and estate sales and Goodwill—big blooms of retro flowers tacked to the walls, midcentury dining chairs and wild wicker thrones, paintings by her daughters, signs reading “$15 prints.” The souvenirs of a mother, an artist, and the daughter of an antiques dealer.

“I grew up with a mother who was obsessed with old things,” says Flett. “The fabric that my mom collected was always wild and colorful, and my nana also loved really poppy and graphic things, so yes, I’ve totally been inspired by all of that.”

As a high school student in Windsor, Colorado, Flett channeled this inspiration into abstract and figurative painting. In college at the University of Kansas, she started off on the journalism track but found herself wavering among peers who seemed more interested in being on television than writing stories. One day, while working as a barista at a local coffee shop, she started talking to a woman whom she worked with about her struggles with school. The woman suggested that she look into the graphic design program at KU, which, coincidentally, was one of the top programs in the country. Flett met with a guidance counselor, and changed her major the next day. “I loved graphic design,” says Flett. “I treated it like painting. The push and pull of elements was so similar to how I’d worked with paint.”

Upon graduation, Erin and her then-boyfriend (now husband) Maslen Flett, a finish carpenter, packed up a U-Haul and made the move from Kansas to Maine, where Erin’s mother had relocated a few years prior. “I loved it here so much,” Flett says of Maine. “There wasn’t the rat race, there wasn’t cement everywhere. When I first came here I was blown away by the trees. It’s so lush and so green here, and I just felt good. I felt connected.”

Flett got a job working for an advertising studio, in which she honed all kinds of branding and marketing skills in addition to furthering her graphic design skills. When she became pregnant in 2004, she struck out on her own, working freelance and developing a line of letterpress stationery, which, despite being featured on popular websites like Design Sponge, never really took off. “It was premature. It was the start of something, but I didn’t know how to keep it going,” says Flett. In 2009 she started thinking about fabric, specifically about bark cloth, which is a reproduction cotton that her mom had collected for years. She found someone who distributed bark cloth made in North Carolina, purchased her first bolt, and started experimenting with screen printing, ink, and stitching to make pillows featuring bold colors and vintage-inspired designs. This is where the story of the Erin Flett brand begins: with two hand-printed pillows given to a friend as a wedding gift. Wholesale orders came in almost immediately. The local screen printer soon became overwhelmed with the volume of work, so Maslen learned to screen print, and the couple moved operations into their kitchen, then the basement.

Recalling these beginning stages, Flett gets goosebumps. “I get emotional thinking about it since it has been such an amazing journey,” she says, reflecting on the countless times she and her husband toiled late into the night after putting their daughters to bed, after he had put in a full day at work. “I remember when it was so brand new the girls would get excited each time Mas did a successful pull. I would say, ‘Look what daddy did!’ and little Aryana would clap. It was so amazing to have them believing in something I wanted so badly.” As if on cue, while Flett recalls these fledgling stages, her little terrier, Louie, jumps into her lap and her daughter Breshia wraps her arms around her mother’s shoulders.

Flett’s background in painting, graphic design, branding, and marketing all came into play as she got the business off the ground: “When things started taking off, the business piece was hard to manage at first, but I did a lot of research and I figured out what my margins needed to be. As a graphic designer I had no experience manufacturing products, but despite the challenges I wanted to keep everything I could here in the U.S., to know who was touching our products every step of the way.” The business has grown 50 percent each year since 2011. By 2013 the family business was bursting at the basement’s seams. “People were literally calling me up and asking if they could shop out of my basement, and they would come in, walk right past my dirty laundry,” she says, laughing.

Flett had dreamed of owning studio space in the Dana Warp Mill, and she finally made the move in fall of 2013. “I couldn’t afford this place. Or I didn’t think I could,” says Flett, who originally put down a deposit on a 500-square-foot space far too small to contain business as it was, let alone where it was going. In her blog from September 2013, Flett writes about pressing her face up to the glass window in the doorway of her current studio, wishing it could be hers. Done wishing, she finally made it happen, collecting money from an assortment of freelance jobs, paying the rent in full (or almost), and making the larger, window-lined space her own. “You just have to figure out how to get where you want to be,” she says. “Moving here changed everything. I think the expense of this place made me want to kick ass. It wasn’t so much that I wanted to be a successful textile designer, as that I wanted to be able to afford this space. I wanted to be able to stay here, making things.”

For the past two years, Flett has been making more and more things—from woven and knitted blankets to drinking glasses to wooly zipper bags and, of course, pillows of new shapes, sizes, and styles. Maslen’s role has grown from just printing to running all production operations and helping with wholesale accounts. The girls weigh in on what designs they like and don’t. As she expands the business, Flett’s brand remains as identifiable as ever, which, from my perspective, has everything to do with the quality of the materials she uses and her fresh combinations of vintage-inspired colors.

“I’m constantly asking myself, is this true to who I am?” says Flett. “Does this feel good to me, or is this just an easy money maker? From the beginning, I didn’t worry about selling my pillows. I really just wanted to make them. And I still operate that way, because if you start making things to sell, you lose your soul in the whole thing. I might miss out on some opportunities that way, but I’m okay with it,” she says, going on to show me one of seven designs she has printed on canvas, framed, and is now selling on the Serena and Lily website.

Flett has hardly lost herself on this journey. It has been instead a process of discovery, of finding out what she’s capable of. Before she took the plunge and went in for the larger studio space in the mill, she says, she stood before an open window looking out over the river and watching seagulls dip and dive in the air. She thought of a novella written by Richard Bach called Jonathan Livingston Seagull, in which a seagull called Jonathan receives this advice: “Begin by knowing that you have already arrived.” Waking up in the dark every morning, making herself a cup of coffee and getting to work making art before another busy day at the mill, Flett feels, without a doubt, like she’s already there. 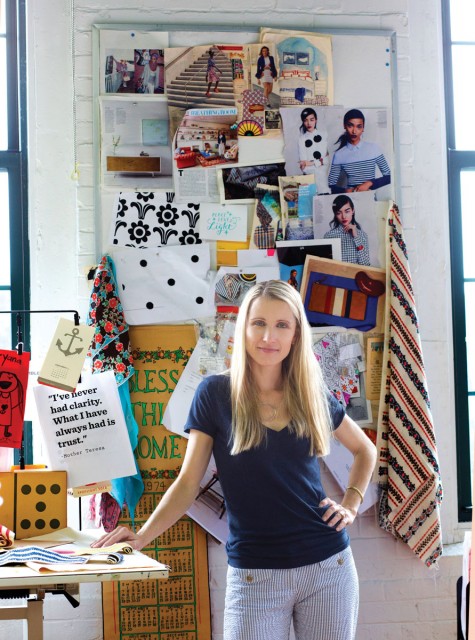 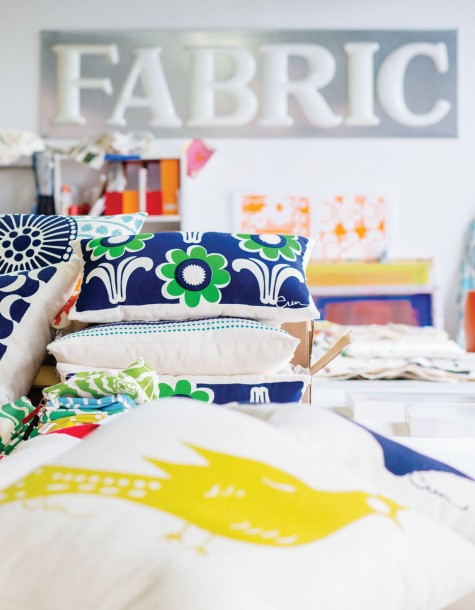 Flett inherited her love of colorful, graphic design from her mother, who was a collector and antiques dealer. 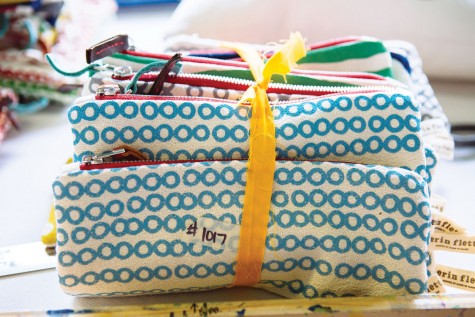