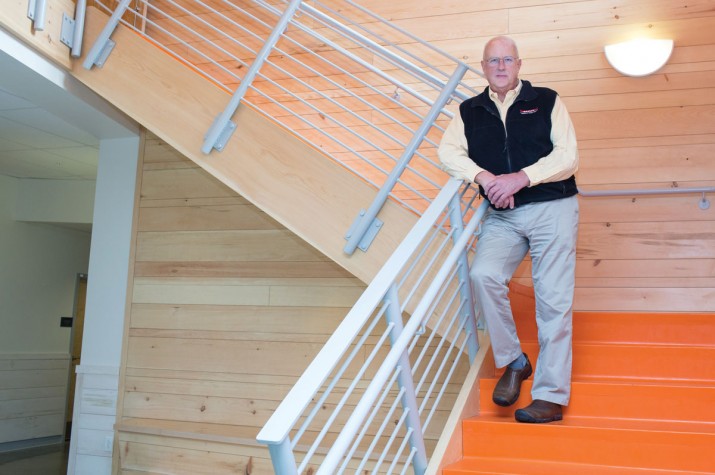 Peter Warren has wanted to be a builder since he was six years old. By now, the president of Warren Construction Group has been at it for decades. 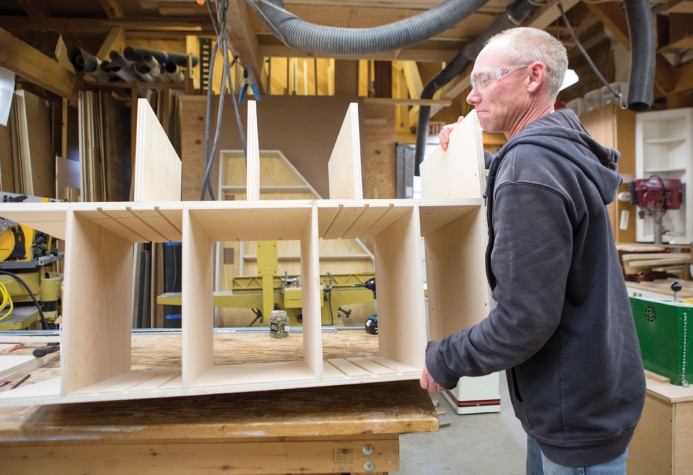 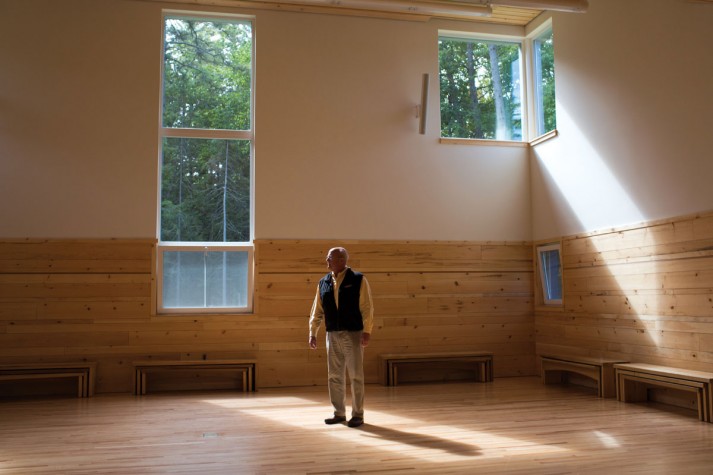 In South Freeport, on a dead-end road off of Route 1, I spot an old barn covered in weather-worn shingles. Hoping that’s the one I’m looking for, I turn onto a dirt drive, park, and open my door to a quiet that is both delicious and disconcerting, considering I’m looking for the headquarters of the sizable Warren Construction Group. I cautiously approach the open door, worried I’ve arrived at the wrong old barn.

I haven’t. Peter Warren—the man I’ve come to meet— quietly converses with someone at a long conference table. To the right, at a row of desks along the wall, people are glued to the papers or computers in front of them. The room is open and beautifully appointed, the ceiling crisscrossed with honey-colored beams. When Warren sees me, he stands up and offers a strong, warm handshake and a glass of water. He is gregarious—a little boyish, even, despite his tall height. He introduces me to his colleague. Then he enthusiastically proceeds to introduce me to everyone in the barn. There is something deeply comfortable—and comforting—about his kind but self-assured manner, and I know from the outset that it will be a good afternoon, that I’m in the company of a genuine, good guy.

And a busy one. This year, some of Warren Construction Group’s wide-ranging projects include a brewery in South Portland, a waterfront home in Freeport, the new dining hall at Kents Hill School in Readfield, and the renovation of the Harriet Beecher Stowe House in Brunswick. With 40-plus years’ worth of building experience under his belt, Warren’s breadth and depth of knowledge are exceptional, and as his frequent collaborator and architect Phil Kaplan of Kaplan Thompson Architects says, “keep him open to trying new things.” Kaplan adds, “There are still plenty of builders in the state who are very cautious about building differently than their grandfathers did. Peter’s not afraid to be on the forefront of high-performance construction. New challenges excite him, and that’s fun for us.”

During our conversation in a cozy corner of the barn’s loft, that signature excitement flares up while discussing everything from the thermal imager on his desk (the approximately $150 device replaces a camera that cost Warren several thousands of dollars several years ago) to the recently built “makerspace” at Gould Academy (designed to incite and support students’ impulses to design and manufacture products of all kinds) to the Quaker philosophies that influenced the design and construction of the Friends School of Portland, which we will visit later that afternoon. His interests, as well as his experiences, are manifold. But cutting through all of his work is a passion for quality. While embracing cutting-edge energy-efficient technologies and building practices, he remains true to foundational building principles: “No matter what, it’s always a question of how you put something together so that it’s square, true, and plumb,” he says.

The second of five children, Warren was raised in Exeter, New Hampshire, where his father was a math teacher at Phillips Exeter Academy. Warren more or less grew up on the prep school campus, at a time when there was a lot of construction going on. As a six-year-old, he stopped by construction sites on his walk to school, asking the builders what they were doing. “I couldn’t believe that they would dig a hole in the ground and that a building would emerge from it,” he says. He roped his younger brother into starting up a lawn-care business with him that they kept up through high school. (This brother, who had a charge account at the lumber mill from the time he was nine, has gone on to become a builder as well.) Later, he worked his way through college at the University of New Hampshire doing a series of odd jobs, but, he says, “I knew what I wanted to do from the time I was six years old, looking into a hole.”

Out of college, he worked for a machinery company and in a metal shop before moving out West, taking on managerial roles in a series of large-scale projects, including a 56-floor building in Denver, Colorado, and numerous hotels in Aspen and other mountain towns. He moved back East—to Maine—in 1985 and worked for a couple of building companies, including HP Cummings, where former president Dallas Folk became “the biggest mentor of my career,” he says, because of the “integrity and honesty” he showed day in and day out. When Warren struck out on his own in 1999 to form Warren Construction Group, his first project was a residential one, which began a new and important chapter in his career as a builder: the Group has gone on to build dozens of beautiful custom homes throughout the state. Their next project? A broadcast tower for Channel 8 that is now the tallest structure in the state of Maine. You can’t pin this guy down. He chalks his versatility up to Maine’s unique economy, quoting his mentor, who said, “If you’re going to live in Maine, you’d better eat what they’re serving.” But it’s more than that. When it comes to building, Warren’s curiosity is insatiable, and challenges are welcome.

Warren Construction Group faced its biggest challenge to date in 2008, when work slowed almost to a halt. Their workload dropped 80 percent in six months, and the company picked up anything and everything it could, from building porches to replacing storm windows. Warren tells me this from behind his desk, pointing to the window he looked out of one Wednesday morning in December of 2009, knowing he had nowhere to send his construction team the following Monday. At the last minute a job came in; Warren was able to keep almost everyone on the payroll, and he wants me to know how much that meant to him. Later on, when I ask him about his favorite part of his job, he first tells me about a recent Sunday afternoon spent with his employees and their families at nearby Winslow Park. “The kids just make me smile. You should see some of them,” he chuckles. “I’ve watched them grow up.”

We say good-bye to the quiet and industrious folks in the old barn, and I follow Warren down Route 1 to Cumberland, noting, with a smile, the Portland Food Co-op sticker stuck to his shiny car—one of the many Warren Construction Group projects completed in recent years. A few miles down the road, we turn in at the beautiful new, net-zero Friends School of Portland, nestled into a quiet, wooded lot. I’ve seen pictures of the team from Warren Construction Group laying its massive amount of ground insulation in the middle of the winter. I knew that the warmth and moisture that would be coming off the students was factored into the design, and that the issue of thermal breaks in a doorway was debated for weeks, but I didn’t know how beautiful the Passive House–designated building would actually be. Kaplan, whose firm, Kaplan Thompson Architects, designed the space, commends Warren especially for his decision to reuse wood from the trees that had to be removed from the site. Warren protected them early, found a way to air-dry them for months (they wouldn’t fit into a kiln), and used the boards—some of which were as long as 24 feet—throughout the school.

An exceptional degree of creativity and care is on display throughout the school, and on our walk-through Warren points out some of the challenges he and his team faced and tells me about the materials used, where they came from and why they were chosen. But he also points to the evidence of learning inside the classrooms: the towers of cardboard blocks and the sweetly scrawled words on the white board in the kindergarten classroom, which is his favorite. Outside of the school, before we say good-bye, Warren says, “I can see what something’s going to look like in my head. A lot of people can, and a lot of people can’t. I’m fortunate.” But even a builder of his caliber can’t see, exactly, how people will interact with and live in, or learn in, the structures he builds up from a hole in the ground. Decades on in his career, he still finds the prospect of creating something out of nothing endlessly exciting. “I always tell people I’ve never had a bad day,” he says, “and it’s largely true. I love to get up in the morning and get to work.” 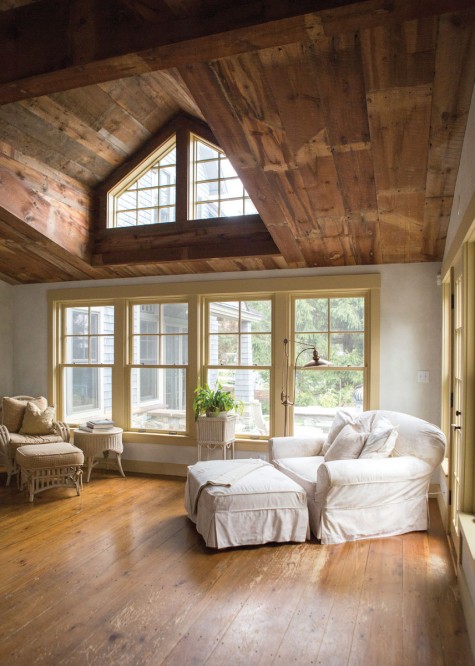 A look at the quality and care that goes into every detail of each custom-built home.