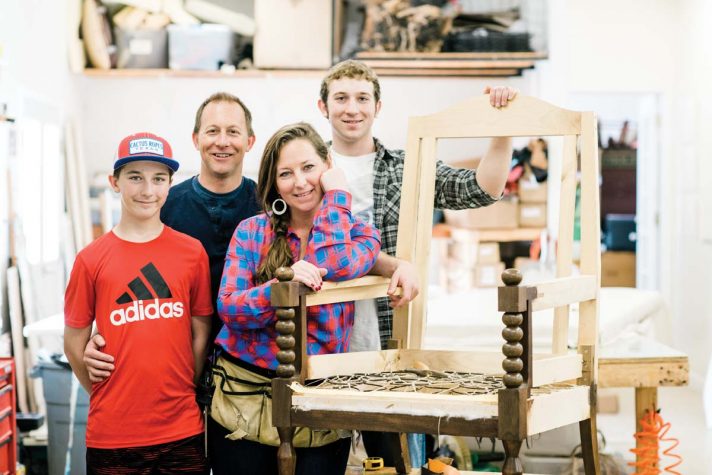 The Delanos and their sons, Silas and Caleb, stand next to an unfinished Dock Harbor Chair, a custom design offered by Alfred’s Upholstery 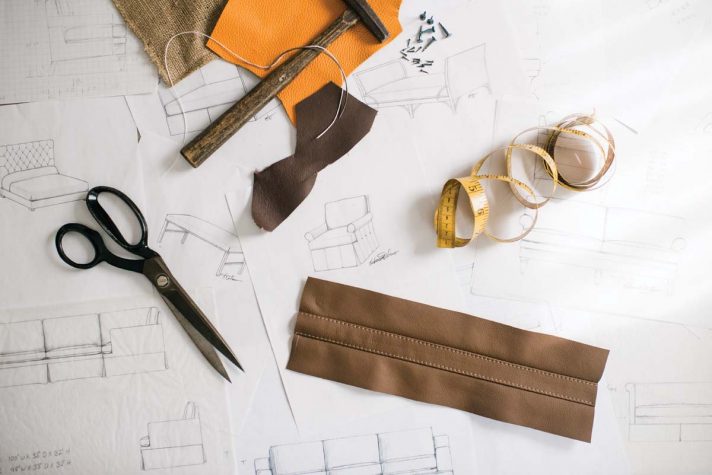 An array of Rebecca’s sketches are shown with an antique tack hammer and her favorite scissors, which she has owned for 20 years. 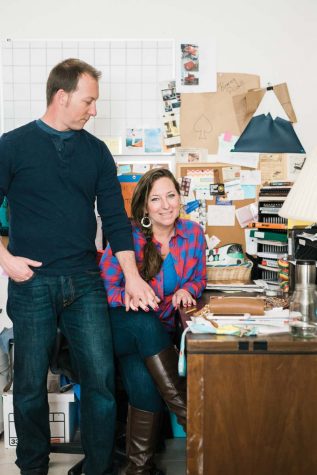 Troy and Rebecca Delano pose in their workshop, which is tucked away in the woods in Waterboro. 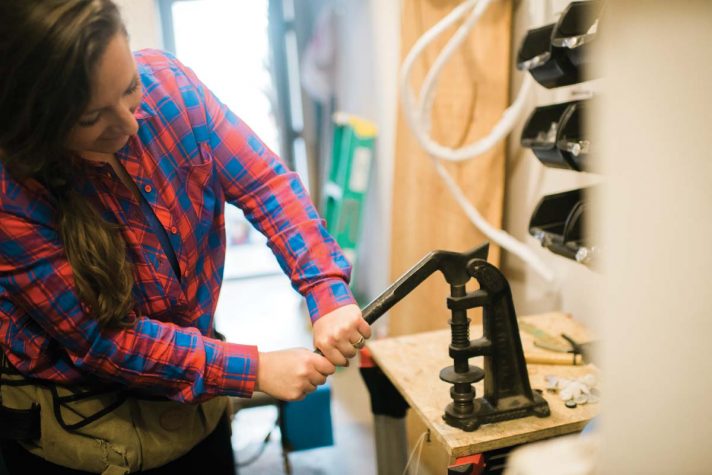 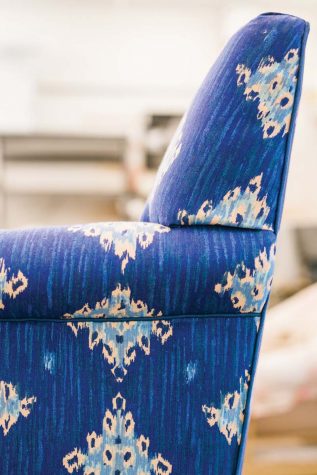 Note how the seams on this sectional crafted for Yarmouth interior designer Leandra Fremont-Smith are joined perfectly so as not to disrupt the pattern. 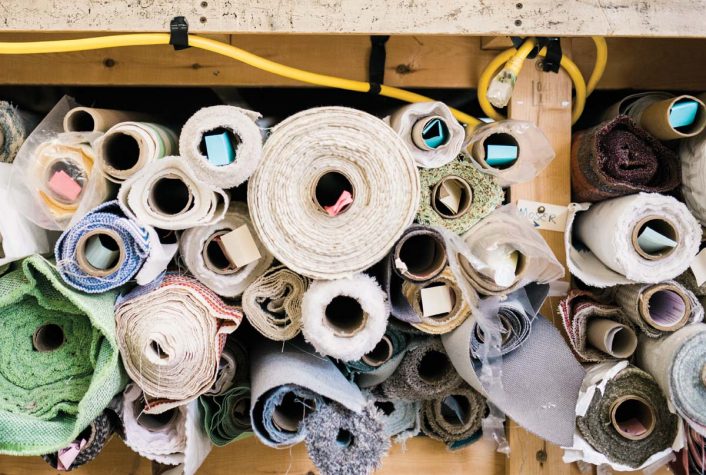 Bolts of fabric and leather hides by companies such as Brunschwig and Fils, Garrett Leather, Peter Fasano, Romo, Schumacher, and Quadrille are stacked beneath the main cutting table.

When most couples get married, they receive traditional gifts: a toaster, nice plates, napkin rings, soft linen towels. Troy and Rebecca Delano were given many such useful presents, plus one more: the company that has been their passion for nearly 20 years.

Rebecca’s family has been in the furniture business for generations as the owners of Folsoms Furniture in Alfred. “Our family has always valued beautiful furniture—I grew up in a no-shoes-on-the-couch kind of house,” she says. Her grandparents wanted to give her a wedding gift that was reflective of their shared values, and they chose a rice-carved, 10-piece Stickley bedroom set. Unfortunately, Troy and Rebecca, who were living as homesteaders in a one-room cabin on 200 acres of wooded land in Waterboro, had nowhere to put it. Her grandparents “tabled the idea,” recalls Rebecca, with a light nod to the pun, but still wanted to give her something substantial. And so they decided to buy Larry’s Upholstery in Waterboro. “I had designed pillows, played with pottery, and made jewelry,” says Rebecca. “My grandfather recognized that I had artistic talent and wanted to fan the flame.” She began apprenticing under founder Larry Latulip, a longtime master of the trade, and quickly showed great promise as an upholsterer.

In 1997 Rebecca took over as owner of the shop and changed the name to Alfred’s Upholstery “because an A-name would appear at the top of the list in the telephone book.” She brought on Troy as co-owner in 2002, and they moved the company to Waterboro to be closer to home. A trained arborist, “I went from chainsaw to needle,” Troy jokes. In reality, he assumed key responsibilities including marketing, pricing, and client interactions, freeing up Rebecca to spend more time on the design process. More extroverted than his wife, Troy is a natural salesman who complements Rebecca’s creative abilities with a sharp eye for business. “Rebecca is an amazing craftsperson, and she works extremely quickly; she’s the reason the business works,” says Troy. “If you sat one of her chairs next to any other chair, you’d be drawn to hers. You may not know why, but you would.”

In upholstery, as in advertising, the trick is to appeal to a customer subtly. “It’s all in the details,” says Brett Johnson of Maine Street Design Co. in Portland. A friend of the Delanos and a customer of many years, Johnson understands that much of Rebecca’s craft is “invisible to the untrained eye.” He points to the way she uses curved needles to sew underneath the back of a chair (as opposed to attaching metal clamps that can leave unsightly bunches in the fabric), how her patterns always match perfectly, no matter how complicated the design, and how she attends to particulars, such as double-stitching in a slightly contrasting thread. “If those stitches aren’t parallel, you’re sunk,” he says.

When I visit Alfred’s Upholstery, located in a light yellow building down a wooded driveway, Rebecca is hard at work on a custom sectional. There is one other employee in the shop, and as she cuts sections of fabric, Rebecca sits nearby, carefully placing pieces of cobalt blue cloth. The sofa they are creating, according to specifications provided by Yarmouth designer Leandra Fremont-Smith, features a double-sided, hand-blocked print of plumed Egyptian horses and ikat-esque splotches. “We designed the shape of the couch to showcase the fabric,” says Rebecca, pointing toward the bottom boards. “This rail needed to be exactly wide enough to show the entire horse. Instead of doing exposed mahogany, like Leandra first wanted, we decided to really highlight the unique fabric.” With wide cushions and down plush filling, the final product will be, in Troy’s words, “pure luxury.”

In addition to custom furnishings, the Delanos do antique restoration, slipcovers, and reupholstering. To determine furniture pricing, the couple must weigh the complications of custom work: materials cost, fabric placement and design, woodworking (which is done off-site by craftsmen the Delanos hire on a per-project basis), and extras such as additional interior padding. Custom-built pieces can range from $1,200 for an ottoman to $13,000 for a large, intricate sectional; slipcovers and restoration work run from $200 to $2,000. “Yes, there are cheaper options out there, but we believe strongly in the value of the pieces we deliver to our customers,” says Rebecca. “My grandfather used to say, ‘the bitterness of poor quality lingers long after the sweetness of low price is forgotten,’ and that has become a mantra of mine, too.”

The couple applies their custom-built ethos to their lifestyle, as well. They live two minutes from their workshop in a passive solar, post-and-beam home, where they homeschool their sons, Silas, 13, and Caleb, 17. The boys attend an intensive tutoring seminar in New Hampshire one day a week and work with Rebecca in the mornings on the other weekdays. They then study independently, checking in with their parents throughout the afternoon. “We’ve made the conscious choice to live a certain lifestyle,” says Troy. “We built our home from trees cut from our lot. In between working at the shop, we spend time teaching our children. Someday, we want to go back to homesteading, but that’s in the far future.” For now, they get their outdoor fix with annual hunting and fishing expeditions near the Allagash River and winter ski trips to Colorado Springs and Vail. “Tradition is key with raising kids,” says Rebecca. “And our boys really love to be outside.”

Someday, they hope, the boys will take over the business, but they know that is a long way off. In the meantime, they’re content to plan expansions themselves, including the construction of a new facility where they can create custom marine furnishings. A recent deal with Back Cove Yachts in Rockland has them working on 14 boats this year. “This will allow us to hire more people, and we’re excited about that,” says Troy. “Having a local business is about employing local craftsmen.” They’d also like to introduce a program that enables them to work with refugees and women in need.

Another project in the pipeline is named Delano Design. “We are creating a custom line of furniture that is designed and made in-house,” says Rebecca. “Troy has always been a forward-thinker for us,” making him well suited to take on a CEO-like role at the new company, as he has at Alfred’s. Her husband jumps in quickly: “Rebecca would be the designer, because she’s so talented and has an innate eye for what looks good.” At Alfred’s Upholstery, the owners clearly know how to compliment—and complement—each other.