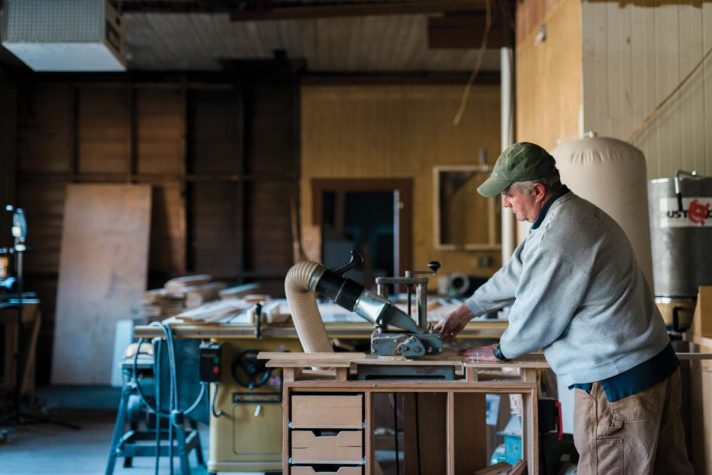 Perry works with a saw in the former railroad station he now uses as his shop and office. 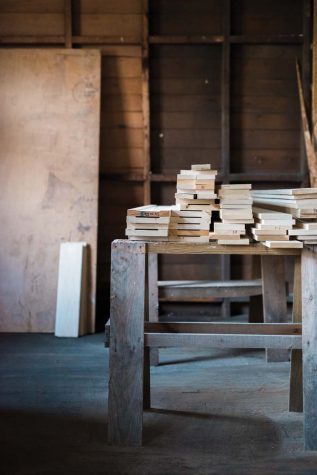 Materials at the ready in Perry’s workshop. 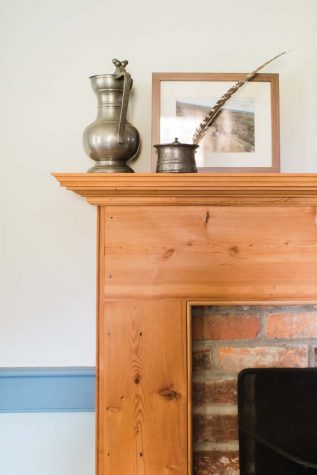 A detail of one of six restored fireplaces in the O’Connor home.

Builder Justin Perry has a ready smile and a warm handshake, but he is not especially eager to talk about himself. A New Hampshire native who moved to Maine in 1998, Perry would rather let his work speak for him.

At the office of Perry Building and Restoration in North Berwick, he is happy to talk about the building—a former train station he is in the process of restoring, having moved his business in last June. He estimates the station was built around 1905, and while it’s been used for various purposes over the years, many of the original architectural details are intact. “Luckily no one had ever gone in and butchered any of this or cut any of it out of the way,” Perry says, gesturing to the heavy crown moulding he found when he removed the dropped ceiling in what is now his office. Paneled in original beadboard, the room has high ceilings and is flooded with light from large six-over-one windows that Perry says he plans to rebuild for energy efficiency. The building’s central space, once the station waiting room, is now a workshop where Perry and his crew make custom millwork for the company’s projects. A former package room holds materials and other supplies. “We’re just slowly going to pick our way through,” Perry says of the renovation effort.

The old building seems the perfect home for Perry’s business, which focuses on restoring and remodeling older homes to add modern functionality while retaining original character. Sometimes, this involves working within rules established by a preservation group. When Tom and Kate Chappell hired Perry to work on their new Ramblers Way retail shop in downtown Kennebunk, for example, the project needed approval from the Kennebunk Historic Preservation Commission. Most often, however, his projects are in private homes, and the degree of historical accuracy is up to the homeowner. The work is often done in stages, he says, with clients first calling him to repair a sagging porch, then eventually deciding on a whole-house remodel.

Nick Armentrout, who is married to the Chappells’ daughter, Sarah, says Perry has been the primary builder on the couple’s property in Lyman since 2004, when he remodeled a barn that had been part of a dairy farm to house horses. The Armentrouts run Carlisle Academy, a therapeutic equine program, and in 2008, following Perry’s second project for them—a new entry porch on one of the property’s houses they asked him to build an indoor riding arena. At first, it wasn’t something Perry felt he could take on. “They called me up and I refused it twice,” Perry says. But after another contractor didn’t pan out, he said yes, working with the architect and engineer to build a facility that is not simply functional but also attractive, incorporating a wall of garage doors to let in more light. In 2010, when the couple decided it was time to renovate their home, they never considered anyone but Perry. “It probably would have been cheaper to mow it down,” says Armentrout of the “not much bigger, but much more livable” renovated house. “It’s basically a custom-built home.”

Michael and Pat O’Connor first hired Perry for structural repairs to their North Berwick home a few months after they purchased it in June of 2012. Built between 1760 and 1780, the center-chimney colonial sits on a bucolic property the O’Connors named Kite Hill Farm. It had last been renovated in the 1970s, but the original structure was largely unchanged. “They hadn’t taken any walls down; they hadn’t changed the doorways,” says Michael O’Connor. The old house still needed help, however, and a neighbor recommended Perry, who lived just down the road.

O’Connor had served as general contractor and carpenter on other homes the family lived in and renovated, so he knew the project would be complicated. At first, Perry wasn’t sure he wanted to tackle the massive job, which involved taking the house down to the studs and putting it back together. “He said, ‘I can’t give you a price, because I don’t know what it’s going to involve, what I’m going to find,” O’Connor says. “I said, ‘That’s OK; I understand that you’re very, very good, and we’ll figure it out.’”

Perry agreed to start by replacing the sill plate, which required jacking up the house and replacing the aging foundation beams with pressure-treated wood. In January of 2013, the O’Connors moved into an annex apartment, and work began inside the main house. By that August, Perry and his crew were finished, having updated the house with new electrical work and plumbing, a new kitchen and pantry, and three tiled bathrooms while preserving its historic integrity. This includes custom-made nine-over-six windows with wood sashes and antique glass—the most cost-effective way to go, says O’Connor, because the original window openings didn’t have to be changed.

Having been closely involved with every aspect of the project, O’Connor has high praise for Perry. “The best thing about Justin is, he’d come to you and say, ‘OK, here’s where we are,’ and I was there to help make the decision. I got every dollar’s worth of value out of what I paid him. Not only is Justin pleasant, he’s an efficient guy, an effective guy, and he gets it done.” 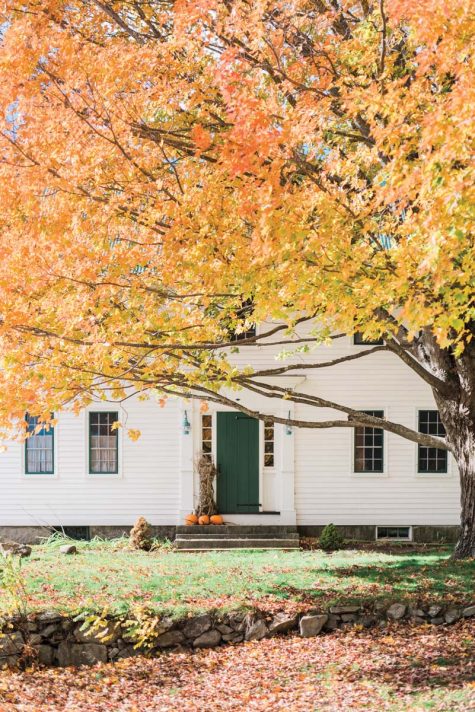 Perry completely restored this North Berwick colonial owned by Michael and Pat O’Connor. Built between 1760 and 1780, the home has been updated with new electrical and plumbing systems and a modern kitchen and baths, while preserving its historical integrity. “We took it down to the studs and put it back together the way that it was,” says Michael O’Connor. 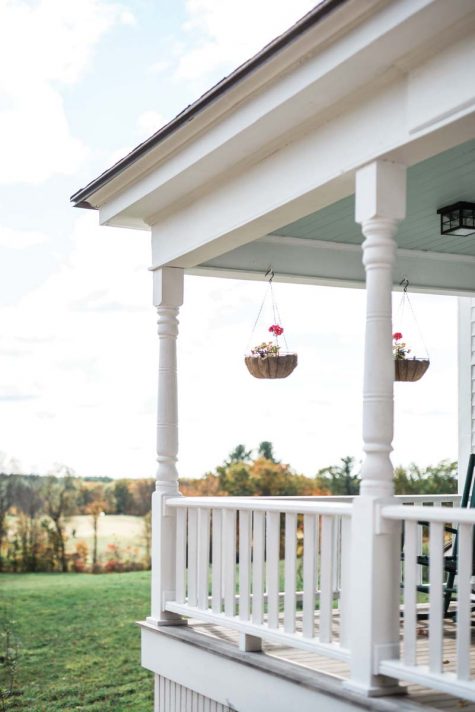 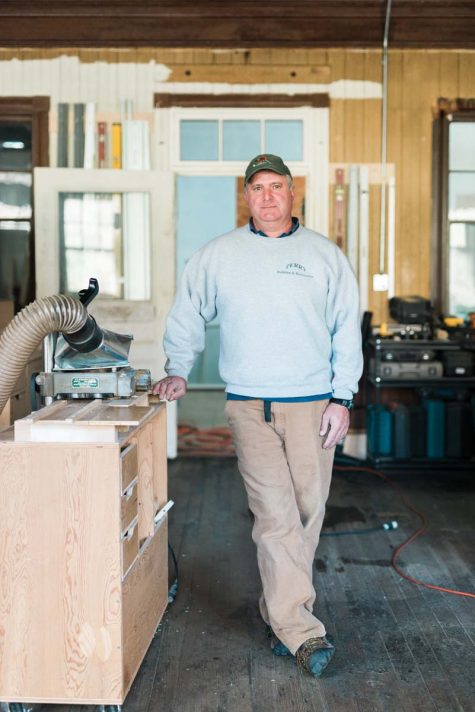 Justin Perry in his workshop in the former North Berwick train station that now serves as the headquarters for Perry Building and nRestoration. He is slowly restoring the building, peeling away dropped ceilings and other modern additions to reveal original, circa-1905 details.